The High Court demands that the Israel Police's Internal Affairs division prosecute the unnamed officer for allegedly urinating on a Palestinian prisoner in 2007.

The High Court partially approved a petition Tuesday from a Palestinian detainee requesting that the Department of Internal Police Investigations (DIPI) prosecute an officer the detainee alleges urinated on him in 2007.

The petition was filed by a Palestinian detainee who alleges that he was physically and sexually abused while being held at a Ma'ale Adumim police station in November 2007.

The DIPI investigated the allegations and eventually closed the case after coming to the conclusion that "the evidence did not present a reasonable chance of conviction." As a result, the detainee turned to the High Court.

The High Court accepted the majority of DIPI's findings in regard to the Palestinian's claim, but reversed the decision related to the specific act described by the man.

Judges noted that, "during the plaintiff's interrogation and that of his cousin who was arrested with him, both men complained—without knowing they were being recorded—that 'the smell of the urine is disgusting, it's killing us. At least I didn't have to drink it. They piss in a bag and then put it on your head.'"

The officer in question denied the allegations, but later admitted to some of them after having been led to believe that his DNA was found on the detainees clothing.

According to the officer, the Palestinian was handcuffed and blindfolded after using the bathroom himself. The police officer asked the man to stand aside so that he too may urinate.

"I ordered him to kneel so I could detain him if necessary," said the officer. He went on to say that the Palestinian made a sudden movement and as a result, "turned toward the prisoner while still urinating and most likely splashed some on him, while is perhaps the reason his DNA was found on his clothes."

When asked why he did not report the event, the officer replied that he was embarrassed.

A Palestinian official warned on Tuesday that an Israeli court ruling allowing Jews to pray at Al-Aqsa Mosque, in Occupied Jerusalem, would fan the flames of religious strife.

A ruling by the Israeli Magistrate Court in Occupied Jerusalem declared al-Aqsa Mosque a holy site and a sacred place of worship to Jews.

Palestinian Minister of Waqf (Endowment) and Religious Affairs Yousef Id’eis warned that such a ruling “will lead to a religious war that can ignite the entire region.”

He dubbed the move “a dangerous escalation” in Israel’s violations of the sanctity of Muslim holy sites in Occupied Jerusalem, defying all international resolutions that categorize al-Aqsa as an exclusively Islamic site.

The minister added that the court ruling makes part of Israel’s attempts to confer a legal cover upon its incessant crimes against the Palestinian land and people.

The Israeli Supreme Court approved on Thursday the closure of an elementary school in Occupied Jerusalem claiming that its curriculums incite against Israel.

The Israeli Ministry of Education and police closed al-Nukhba school which has 220 students enrolled in its classes, claiming that their founders support Hamas Movement and its curriculums incite against Israel, according to Israeli TV channel 2.

The Israeli Ministry of Education, according to channel 2, issued a closure order for the school, which was handed to its headmaster, Loai Bkairat, who refused the order and filed a complaint to the Israeli police. However, the headmaster was arrested on Thursday for investigation but was released later with certain conditions.

For its part, the school administration described this order as unjustified, and said, “We will fight as long as we can in order to reverse this unjust decision which aims at displacing students and destroying their school which received all temporary licenses at the beginning of the school year”.

Naftali Bennett, the Israeli Minister of Education, threatened to close any school that “incites against Israel”.
Furor as 4 extremist judges secure seats at Supreme Court of Israel

The Judicial Appointments Committee for the court announced that it had appointed David Mintz, Yael Willner, Yosef Elron and George Kara to the 15-member Supreme Court, out of a shortlist of 27 candidates.

Three of the four were on Justice Minister Ayelet Shaked’s list of preferred candidates, while the three judges on the nine-member judicial appointments panel, who voted as a bloc, failed to advance any of their nominees.

Mintz, who currently serves as a Jerusalem district judge, is said to be Shaked’s top pick, hailing from the West Bank Gush Etzion illegal settlement outpost and considered a strong advocate for extremist positions.

Yosef Elron, the president of the Haifa District Court since 2013 and a known non-activist judge, was backed by Finance Minister Moshe Kahlon, who also sat on the appointments committee. Shaked was also reportedly in favor of the fanatic Zionist Haifa District Court Judge Yael Willner.

Speaking immediately after the announcement, Shaked claimed it was “a historic day” that could dramatically change the makeup of Israel’s highest legal authority.

Shaked, of the right-wing Jewish Home Party, has frequently spoken out in favor of reining in the High Court or changing the makeup of the justices to incorporate more extremist, anti-Arab views.

Opposition politicians expressed fears that shifting the court’s ideological makeup will leave open key issues that the fractious Knesset is unable to resolve, such as those pertaining to civil liberties, religious freedom and the rights of Palestinians.
22 feb 2017
Five children who got longer sentences for throwing stones than Israeli soldier who shot incapacitated Palestinian dead

'If [a Palestinian] kills an animal... he would have gotten more time,'  family of deceased man says

An 18-month jail sentence handed down to an Israel Defence Force (IDF) recruit for the killing of a wounded Palestinian has prompted widespread criticism for its apparent leniency in light of the severity of his crime.

Then 19-year-old medic Elor Azaria was found guilty of manslaughter for fatally shooting 21-year-old Palestinian knife attacker Abdel Fattah al-Sharif in the head after the assailant had already been disarmed and injured in an incident in Hebron last year.

The killing was recorded by an onlooker using a mobile phone in footage that was widely shared by Israeli human rights group B’Tselem.

While prosecutors sought a term of between three and five years in jail, Azaria was given 18 months in prison, 12 months' probation, and was demoted from Sergeant to Private. Manslaughter is punishable by up to 20 years in prison under Israeli law.

The ruling was a landmark case insofar as no member of the IDF has been prosecuted for actions carried out in uniform in over 12 years.

However, Palestinians and rights activists have widely criticised the punishment as not severe enough.

It is possible that Azaria could walk free after serving 12 months of his sentence, and there have been several high-profile calls for the young recruit to be pardoned altogether.

His lawyers' claims of self-defence are supported by 65 per cent of the Jewish Israeli public, an August 2016 survey by the Israel Democracy Institute found.

Al-Sharif’s father Yusri told reporters from his home in the West Bank that the family had never expected the Tel Aviv military court “show trial”  to do the deceased man justice.

“Even though the soldier was caught on video and it is clear that this is a cold-blooded execution, he was convicted only of manslaughter, not murder, and the prosecution asked for only a light sentence of three years.

“The sentence he received is less than a Palestinian child gets for throwing stones.”

The family’s comments are not hyperbole. In 2015, Israeli Prime Minister Benjamin Netanyahu’s cabinet established a mandatory minimum penalty of four years in prison for those who "endanger human lives by throwing stones, fire-bombs and explosives".

The temporary measure, expected to last until 2018, came into force after an Israeli man died in a car crash linked to a stone-throwing incident.

Under military law, Palestinian rights group Addameer says, throwing stones can be punishable by up to 20 years in prison.

Just a handful of people imprisoned under the new stone-throwing legislation who were handed down longer sentences than Azaria, include five boys from east Jerusalem who were sentenced in March last year for throwing stones at cars:


In addition to the above five, in the same trial, 14-year-old Omar Rani Yaseen received a one-year sentence, and Yazan Hani Ayoub, whose age was not given, was given  one year and two months in prison.
21 feb 2017
Palestinians condemn light sentence against killer of Sharif 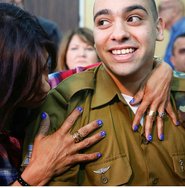 Israeli cold-blooded murderer Elor Azaria with his mother. Her nail polish says: Mom's hero! Kill an immobile wounded Palestinian, you get 18 months; smoke a joint, and you get 11 months.

Palestinian official and human rights authorities condemned the Israeli court’s lenient jail term against soldier Elor Azaria, a soldier who murdered in cold blood the Palestinian wounded young man Abdiulfattah al-Sharif, to only 18 months in jail, although he had already been convicted of intentional killing.

The martyr’s family held a press conference in al-Khalil city center in protest at the light court sentence calling it accomplice. The family disclosed their intention to raise the file to the Palestinian Authority (PA) in order to be submitted to the International Criminal Court (ICC) for the prosecution of soldier Azaria along with Israeli leaders.

Palestinian Foreign Ministry called the court’s sentence a farce saying that it is a form of discrimination against Palestinians.  The normal sentence for such a crime reaches over 20 years, the ministry highlighted.

Issa Qaraqe, Head of Detainees and Ex-detainees Committee, said Israeli military courts are extremely racist and do not abide by humanitarian standards or even court just procedures.

For her part, member of the PLO executive committee Hanan Ashrawi said that Israeli judiciary follows a system of racism and extremism which is based on apartheid.

An Israeli military court convicted soldier Elor Azaria, of intentional killing of martyr Sharif on March 24, 2016 after he was shot and wounded for alleged stabbing attack carried out by Sharif and his friend martyr Ramzi al-Qasrawi.
Israeli military court gives killer of Palestinian lenient jail term
A military court last month found Azaria guilty of manslaughter, a crime that carries a top punishment of 20 years in jail.

Last March 2016, Azaria was serving in the city of al-Khalil (Hebron) when two Palestinian young men allegedly carried out a stabbing attack.

One of the two Palestinians was shot dead by Israeli soldiers. The other, Abdul-Latif Ashareef, was shot and wounded. Eleven minutes later, as the wounded man, 21, was lying on the ground immobile and incapacitated, Azaria showed up and shot him cold-bloodedly in the head with an assault rifle.
17 feb 2017
Israel to establish new settlement for Amona settlers

Two Israeli ministers revealed on Friday a plan to build a new illegal settlement at the expense of Palestinian lands in West Bank with the aim of hosting Israeli settlers evacuated recently from Amona outpost.

"We are committed to our pledge," she said.

For his part, Israeli Education Minister Naftali Bennett revealed that Israel’s Prime Minister Benjamin Netanyahu has approved the establishment of the new settlement.

"I’m totally sure that Netanyahu will abide by his promise," Bennett said.

In early February, Israeli forces began an operation to evacuate settlers from Amona settlement illegally built in West Bank after Israel's Supreme Court had set Feb. 8 as the final date for it to be evacuated.