'I am a feminist,' says former PM at election campaign launch, adding that he is severing all business links to accused child sex trafficker; he also brands Netanyahu's son 'an inciting, prostitute-user who lives a parasitic life', highlighting PM's ties to Natan Eshel, 'a convicted sex offender'

Former prime minister Ehud Barak launched his latest election campaign Wednesday evening, repeating his denial that he had anything to do with accused pedophile Jeffrey Epstein's alleged actions.

"I am a feminist. The deeds attributed to Epstein are heinous and I had nothing to do with them," said Barak at the Tel Aviv event for his new Israel Democratic Party. "I've ordered Epstein removed from my businesses, and I plan to file a slander lawsuit against the newspaper behind this plot against me."

The British newspaper the Daily Mail published three-year-old images of Barak earlier Wednesday, showing him entering the New York home of the accused child sex trafficker and appeared to link him to the disgraced financier's "parties" with young girls.

"I thought it (Epstein's earlier conviction in 2008) was a one-time slip, and once it happened again I announced that I am disengaging from him entirely," said Barak.

The former prime minister's dealings with Epstein came under scrutiny in the Israeli media after an investigative report last year revealed that in 2004, Barak received more than $2 million for what was described as research from the Wexner Foundation, to which Epstein was connected.

The foundation later stated it is committed to the promotion of excellence and leadership in Israel’s public sectors, and has also recently released a statement clarifying that all ties with Epstein were severed over a decade ago and that the foundation views his suspected behavior as abhorrent.

Barak also listed the alleged sexual crimes of members of Prime Minister Benjamin Netanyahu's political allies, but also singled out his son, Yair Netanyahu, who was recorded a year ago while visiting a strip club with his security guard and driver in tow, accompanied by his friends.

"The fact that under Netanyahu's reign an inciting, prostitute-user receives protection, lives a parasitic lifestyle and gets tight Shin Bet security… That's a disgrace," Barak said referring to the prime minister's son.

"The fact that a convicted sex offender who was removed from public office for life continues to be Netanyahu's closest associate and the man who helps him establish governments — that's a disgrace," Barak said, referring to Natan Eshel, who was convicted in a disciplinary court and banned from civil life for taking so-called "upskirt" pictures of women in the Prime Minister's Office.

"The fact that under Netanyahu serves a minster accused of covering for pedophiles and remains one of his closest associates — that's a disgrace," Barak said, referring to Deputy Health Minister Yaakov Litzman, suspected of using his position and authority to sabotage the extradition to Australia of a Jewish teacher suspected of pedophilia.

"Ehud Barak's lies won't help him get away from answering the Israeli public's questions," said a statement from the Likud Party following the Barak campaign launch.

"What did he do in the home of his partner and friend, the convicted pedophile, Jeffrey Epstein, and why did he receive $2.3 million from his foundation for research that never existed?"
Ehud Barak hits back as UK paper ties him to Jeffrey Epstein, threatens law suit 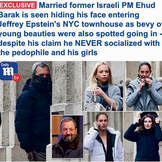 Former PM and IDF chief dismisses claims that he was hiding his identity as Daily Mail publishes old pictures of him outside New York townhouse of accused child sex trafficker, hinting at involvement in the alleged crimes; threatens to suit newspaper it doesn't apologize

One of the images showed Barak covering his face with a scarf, implying that he was trying to disguise his identity. Barak, however, said that he had been trying to protect his face from inclement weather of January in New York.

Barak's lawyers demanded that the British newspaper apologizes for publishing the images and linking Barak to Epstein's alleged crimes, and threatened to suit the organization if it doesn't respond to their demand before 7pm Israel time on Wednesday.

"Guilty," the former prime minister wrote on Twitter on Wednesday.

"When its cold I tend to cover my face. Not just in New York but anywhere in the world. I never thought that it was news."

Barak added: "Stay tuned to the reveal of my scarf collection."

He also added an image of himself covering his face from the cold on another occasion.

The Daily Mail's headline read: "Married former PM Ehud Barak is seen hiding his face in entering Jeffery Epstein's NYC townhouse as bevy of young beauties also spotted going in despite his claim he never socialized with the pedophile and his girls."

The Mail article came a day after Barak gave an interview to the Daily Beast, stating he never attended a party with Epstein or saw him with women or young girls.

Barak told the Daily Beast that he had been introduced to Epstein by late Israeli statesman Shimon Peres.

“The man who introduced me to Epstein about 17 years ago was Shimon Peres,” Barak told the website. He said the initial encouner took place during an event at which “there were many famous and important people, including, if I recall, both Clintons and hundreds of others.”

A statement released Wednesday by Barak's Israel Democratic Party read: Ehud Barak rejects the loathesome insinuations by the newspaper's report. The allegations are baseless… This is not the first time the paper has published false reports about Mr. Barak and others."

Opposition Leader and head of the Blue and White Party Benny Gantz told Ynet in an interview Wednesday that he could not rule out involvement of "someone" in Israel who would benefit from this kind of reporting. He declined to say outright to whom he was referring.

"Things don't happen with only divine intervention," Gantz said. "I would rather not go there. I prefer to talk about the issues."

Barak recently unveiled his new party and announced his intention to oust Prime Minister Benjamin Netanyahu, who is facing a series of charges for alleged corruption.

The time has come to choose between "the State of Netanyahu or the State of Israel,” Barak claimed.
16 july 2019
Ehud Barak: I never attended a party with Jeffrey Epstein

Former PM is facing criticism at home for his dealings with the suspected pedophile and child sex trafficker, not least of all from his long-time political partner and rival Benjamin Netanyahu.

Former prime minister Ehud Barak claimed in an interview to the Daily Beast that in all his dealings with accused pedophile Jeffrey Epstein he had never attended a party or saw Epstein with women or underage girls.

Barak has been criticized for his ties with the suspected child sex trafficker after he announced he will be competing in the upcoming elections to the Knesset at the head of a new party.

The criticism has come, not least from Prime Minister Benjamin Netanyahu, who is facing an uncertain result in the September ballot.

Barak fired back at the Netanyahu's remarks reminding him that he and Epstein both are facing legal charges, referring to the three corruption cases pending against the prime minister.

Barak told the Daily Beast he was introduced to Epstein by former president Shimon Peres adding "there were many famous and important people, including, if I recall, both Clintons and hundreds of others.”

He could not say how many times he met with Epstein but said it was more than 10 but less than 100.

“I never attended a party with him,” Barak told The Daily Beast. “I never met Epstein in the company of women or young girls.”

Barak told the Beast “at his home, I met many very respected people, scientists, Nobel Prize winners, and I met him also in Boston, at MIT or the Harvard labs he supports.”

Ehud Barak's dealing with Epstein came under scrutiny in the Israeli media after an investigative report last year, revealed that in 2004, Barak received $2.4 million for what was described as research from the Wexner Foundation which Epstein was connected to.

The foundation states it is committed to the promotion of excellence and leadership in Israel’s public sectors.

It has also recently released a statement clarifying that all ties with Epstein were severed over a decade ago and that the foundation views his suspected behavior as abhorrent.

Haaretz newspaper reported last week that Epstein had invested in Carbyne a software company founded by the former prime minister.

Barak told reporters he is considering severing all ties he has with Epstein.
11 july 2019
Ex-premier Barak plays down relationship with Epstein
According to the media reports, Barak received over $2 million in grants last decade from the Wexner Foundation when Epstein sat on the group's board. Netanyahu accuses the media of remaining "silent" about the matter.

In a radio interview Thursday, Barak said he met Epstein several times, but said he "didn't support me or pay me." He said he has met many people over the years, including some involved in "problematic things," such as Harvey Weinstein.

"I also met Netanyahu," he quipped.

Epstein was charged with sex trafficking on Monday, as prosecutors accused him of luring dozens of girls as young as 14 to his luxury homes in New York and Florida and paying them for sex acts.

An indictment unsealed in federal court in Manhattan said Epstein, 66, "intentionally sought out minors and knew that many of his victims were in fact under the age of 18, including because, in some instances, minor victims expressly told him their age."

According to a report published by Haaretz yesterday, Barak was asked whether he knew an investigation was underway to ascertain what funds he owned overseas. He said this was “nonsense".

A spokesman for the public prosecutor refused to confirm or deny any of the allegations.

Barak worked as a businessman between 2001 and 2007 after losing the presidential elections and until he returned to government as minister of Security in Ehud Olmert’s government. Since the 2013 elections, he returned to his business as an investor, partner and consultant linked to the Swiss investment private bank Julius Baer and the strategic consulting firm Ergo.
Page:  2 - 1
Powered by