The Israeli occupation forces late on Sunday evening kidnapped two Palestinian children near the Ibrahimi Mosque, in al-Khalil, at the same time as Israeli settlers defiled the site.

17-year-olds Bashar Gheith and Mohamed Gheith were kidnapped by the occupation soldiers at Checkpoint 106, set up in the vicinities of the Ibrahimi Mosque, in the southern West Bank province of al-Khalil, eye-witnesses told a PIC news correspondent.

Meanwhile, dozens of Israeli settlers stormed the plazas of the Ibrahimi Mosque and performed sacrilegious rituals, sparking tension in the area.

Lawyers of the Prisoners Affairs Commission, Yamen Zidan and Tamim Younis, said on Sunday that the health condition of the longest-serving Palestinian prisoner in Israeli jails Kareem Younis started to deteriorate.

The media committee of the Freedom and Dignity hunger strike said that Younis appeared on Sunday in a hearing held at Haifa District Court to consider the petition submitted by the two lawyers to allow lawyers to visit him.

The media committee said that no decision has been reached so far on the petition.

The two lawyers told the media committee that signs of fatigue were clearly visible on Younis who lost 10 kg of his weight since the start of the strike on 17th April 2017.

They pointed out that Younis was exhausted as a result of the repeated transfers imposed by the Israel Prison Service on him during the previous 14 days.

In a video showing Younis in the court's hearing, Younis affirmed that the prisoners would go on with the hunger strike even if they ended as "dead bodies".

The media committee held the Israeli government fully responsible for the life of Younis and his striking mates. 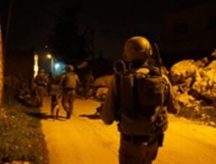 The Palestinian Prisoners’ Society (PPS) has reported that Israeli soldiers abducted, on Monday at dawn, at least thirty Palestinians in different parts of the occupied West Bank, including seventeen in the al-‘Eesawiyya town, in East Jerusalem.

Owners of some of the invaded homes have been identified as Yousef Ali Awad, Abdul-Athim Qaisiyya and Hasan Khalil Awwad.

Medical sources said one Palestinian, identified as Wi’am Hannoun, suffered moderate-to-severe wounds when the soldiers shot him with live rounds in his leg, after the army opened fire on Palestinians, protesting the invasion into Jenin refugee camp.

In Bethlehem, the soldiers abducted two Palestinians from Doha town; one of them has been identified as Mohammad Hasan Ajamiyya.

In occupied Jerusalem, dozens of soldiers and security officers invaded the al-‘Eesawiyya town, surrounded its neighborhoods, and violently searched dozens of homes before abducting seventeen Palestinians.

Also in al-‘Eesawiyya, the soldiers summoned Ahmad Yousef Obeid and Sufian Mahmoud, for interrogation at a military base in occupied Jerusalem.

Mohammad Abu al-Hummus, a member of the Follow-up Committee in al-‘Eesawiyya, said the town has been subject to daily invasions and violent searches of homes, cars and stores, while police officers also ticketed dozens of Palestinians without any cause or reason.

The soldiers also removed the protest tent that was installed in solidarity with the hunger striking detainees in Israeli prisons, installed many roadblocks, and have been occupying many rooftops, using them as monitoring towers and firing posts.

In addition, several army jeeps invaded Aseera ash-Shemaliyya town, north of Nablus, in the northern part of the West Bank, before the soldiers searched homes and abducted Mo’men Sabah, while another Palestinian, identified as Osama Yameen, was abducted from his home in Tal village, southwest of Nablus. Both abducted Palestinians are students of the Najah National University, in Nablus city.

Furthermore, the soldiers invaded and searched homes in the al-‘Ein refugee camp, west of Nablus, and abducted Rabea’ Khaled.

Several army jeeps invaded Aseera ash-Shemaliyya town, north of Nablus, before the soldiers searched homes and abducted Mo’men Sabah, while another Palestinian, identified as Osama Yameen, was abducted from his home in Tal village, southwest of Nablus.

Both abducted Palestinians are students of the Najah National University, in Nablus city.

Furthermore, the soldiers invaded and searched homes in the al-‘Ein refugee camp, west of Nablus, and abducted Rabea’ Khaled.

The soldiers, and police officers, assaulted a group of Palestinian journalists and photojournalists, near Nablus Street, in Jerusalem, as they were documenting a nonviolent procession in support of the Palestinian detainees, holding an open-ended hunger strike in Israeli prisons, for the thirteenth consecutive day.

The soldiers deliberately damaged cameras and equipment, owned by journalist Ahmad Gharabla, who was also assaulted by the soldiers.

At least 17 Palestinians were kidnapped by the Israeli forces from al-Issawiya town, northeast of Occupied Jerusalem, at daybreak Sunday.

A PIC news reporter said the Israeli soldiers broke into Palestinian homes in al-Issawiya and kidnapped 17 civilians, including minors.

The list of detainees included 16-year-old Shadi Atiyeh, Adam Mahmoud, and Akram Mustafa, along with Mohamed Mahmoud, Abdul Kadir Dari, Firas Nidhal Mahmoud, and Ismail Muheissen, all in their 17s.

Palestinians held in Israeli jails have been an open ended hunger strike for the second consecutive week to protest mistreatment and push for basic rights.

A mass hunger strike has swept Israeli jails since April 17 in response to the mistreatment and violations endured by the Palestinian detainees.

The number of hunger strikers has hit 1,700, after 100 more detainees from Megiddo jail joined in on Saturday.

Over recent days, sit-in tents, rallies, and e-campaigns, among other protest moves have been staged by pro-Palestine activists, nationwide and overseas, in solidarity with the hunger strikers.

1,200 sick Palestinian detainees, including 21 cancer-stricken patients and 17 others with cardiovascular disorders, have been locked up in Israeli penitentiaries across the occupied territories, among a total of 1,700 Palestinian prisoners.
Israeli navy kidnaps two fishermen off Gaza coast

The Israeli occupation navy on Sunday morning kidnapped two fishermen off the coast of the Gaza Strip and confiscated their boat.

A local committee documenting Israel’s violations against Gaza fishermen said, in a press release, that Israeli gunboats encircled and opened fire at a fishing boat off the northern shores of Gaza, rounded up two fishermen aboard it and towed it to an unknown place.

The seized boat belongs to Adnan Abu Rayyala and the two detained fishermen are his sons, Sha’ban, 33, and Mohamed, 20, according to the committee.

Israeli gunboats are around Gaza fishermen every day, harassing them, shooting at them, damaging or seizing their boats, and making arrests. Sometimes fishermen are injured or killed during gunfire attacks.

Under the 1993 Oslo accords, Palestinian fishermen are permitted to fish up to 20 nautical miles off the coast of Gaza. Over the past 18 years, however, Israel has reduced the fishing area gradually to a limit of three nautical miles as part of its blockade on Gaza.