A Palestinian youth was shot dead by Israeli occupation forces (IOF) on Saturday evening in Beit Awwa village in the West Bank province of al-Khalil.

The Palestinian Ministry of Health announced that Badawi al-Masalma, 18, died after being shot by IOF soldiers near al-Khalil.

The Palestinian Red Crescent Society reported that medics were prevented from approaching the scene where the shooting took place.

Local sources said that the IOF shot a youth and arrested two others at the entrance to Beit Awwa for allegedly throwing Molotov cocktails at IOF military jeeps.
Three Palestinians kidnaped by IOF in W. Bank

According to local sources, the IOF kidnaped Mu’men Owainat and Rashed Abu Asab at the southern entrance to Qalqilya city during clashes with local youths in a nearby area.

The IOF also kidnaped another young man called Yaser Sadaqa, a resident of Anzah village in Jenin, at a checkpoint in Huwara town, south of Nablus.

In al-Khalil, the IOF stormed al-Arroub refugee camp and photographed a number of homes. They also stormed Awwa town in the west and fired stun grenades to scare the local residents.

A home was also ransacked by  in Beit Ummar town in northern al-Khalil, with no reported arrests.

In Jerusalem, plain-clothes police officers were seen in Issawiya district and later they withdrew without making arrests.
Soldiers Assault A Young Palestinian Man, Abduct Him, In Jerusalem 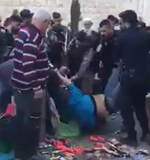 Eyewitnesses said many soldiers assaulted the young man, identified as Morad Omar Darwish, near Bab al-‘Amoud, in Jerusalem. The Palestinian is from the al-‘Isawiya town, in Jerusalem. video

They added that the soldiers were kicking and beating the young man, before moving him to an interrogation facility in the occupied city.

The incident took place after the army attacked dozens of Palestinians, and prevented them from entering the Al-Aqsa Mosque for Friday prayers.
29 nov 2019
Soldiers Abduct A Palestinian Police Officer, Injure Several Residents, In Hebron

Israeli soldiers abducted, on Friday ay dawn, a Palestinian police officer in Surif town, and injured several residents in Beit Ummar town, near Hebron, in the southern part of the West Bank.

They added that Abu Fara has three other brothers who are imprisoned by Israel.

In addition, the soldiers invaded Beit Ummar town, north of Hebron, and attacked Palestinians who protested the invasion.

The Israeli occupation forces (IOF) at dawn Friday arrested two Palestinian citizens after raiding their homes in the West Bank.

The IOF claimed the two detainees are "wanted" for being involved in anti-Israel activities.

According to the Palestinian Detainees and Ex-Detainees Affairs Commission, 5,700 Palestinians are being held in Israeli jails, including 230 minors, 48 female prisoners, 500 administrative detainees, and 1,800 prisoners with health problems, 700 of whom need urgent medical intervention.
28 nov 2019
Israeli Soldiers Demolish Four Homes In Hebron
The demolished homes are owned by the families of four detainees, identified as Hamad Aref Asafra, his brother Qassem Saleh Asafra, in addition to Nasseer Saleh Asafra and Yousef Atiya Zohour.

The Israeli army claims that the four were involved in killing an off-duty soldier, identified as Dvir Sorek, 19, near the illegal Migdal Oz colony, in the occupied West Bank, on August 9th 2019. Israeli sources said Sorek was part of a program that combines Torah studies and military service.

Israel’s policy of home demolition of Palestinians involved, or believed to be involved, in killing or attacking Israelis, including soldiers, is an act of illegal collective punishment that violates International Law and various international treaties, including the Fourth Geneva Convention.

The invasion and demolitions led to protests, and the soldiers fired a barrage of gas bombs, concussion grenades, rubber-coated steel bullets and rounds of live ammunition.

According to local sources, the IOF kidnaped two Birzeit University students identified as Mohamed al-Maliki and Harounn Safa at the entrance to Kafr Malik village, northeast of Ramallah.

Israeli soldiers assaulted, Thursday, three young Palestinian men, and abducted them, in the al-Waad Street, in the Old City of occupied East Jerusalem.

They added that the soldiers assaulted the three Palestinians, and were hurling insults at them, leading to a scuffle, before they were detained.
Soldiers Abduct Five Palestinians In Jenin And Hebron

Israeli soldiers abducted, on Thursday at dawn, five young Palestinian men from their homes in the Jenin and Hebron governorates, in the northern and southern parts of the occupied West Bank.

They added that the soldiers abducted four Palestinians, identified as Ahmad Mohammad al-Amer, Yazid Ja’absa, in addition to Yazid Abdul-Hadi Saffouri and his brother, Ahmad.

In Tulkarem governorate, in northern West Bank, the soldiers invaded and ransacked the home of a former political prisoner, identified as Mohammad Naji Sabha, in Anabta town, east of Tulkarem city.

Israeli soldiers stationed at the Erez (Beit Hanoun) Terminal, in northern Gaza, abducted a Palestinian man who was accompanying his ailing brother to a hospital in the occupied West Bank.

Media sources said the soldiers abducted Mousa Marzouq Abu Taha, 47, from Tal al-Sultan neighborhood, west of Rafah, in the southern part of the Gaza Strip, while he was accompanying his brother who was heading to the West Bank to undergo an eye surgery.

The incident took place Tuesday, when the soldiers informed Mousa that he needs to be interviewed at 9 in the morning at the terminal, so that he can obtain a permit to accompany his brother, however, once he went there, he was instantly detained.

According to official documentation by the Al-Mezan Center for Human Rights, Israeli soldiers have abducted 11 Palestinians at Erez Terminal this year, including eight merchants, and two who were accompanying patients.

It said that such violations are carried out against basic rights of the freedom of movement and the right to receive medical care, and are serious breaches of International Law, in addition to all laws regarding the protection of civilians without discrimination.

Al-Mezan said that Israel, who is also a signatory to these laws and agreements, is violating the civilian, economic, social and cultural rights, and all laws regarding the political rights of the Palestinian people, including the Fourth Geneva Convention of 1949, which calls for the protection of civilians.

It strongly denounced Israel for its ongoing attempts to blackmail the patients and their families, by trying to turn them into collaborators, informing on their own people, to be allowed to cross or receive the medical care they urgently need.
No Solution for Two Detainees on Hunger Strike for 2 Months

Commission of Detainees’ Affairs stated that two hunger striking Palestinian prisoners; Ahmad Zahran and Musab al-Hindi, are suffering from acute deterioration in their states of health, with no serious solutions to end their case, the Palestinian Media Agency (ALRAY) reported.

The commission indicated in a statement, on Wednesday, after the prisoners’ lawyer visited them at the Nitzan jail, that the Israeli Prison Service (IPS) have provided no meaningful solutions to resolve their cases, noting that they have been on hunger strike for over two months in protest against their administrative detention.

The statement added that although the two prisoners have suffered from serious deterioration in their health, depending on a wheelchair to move, and despite having lost over 20kg, the IPS brings them with handcuffs on their wrists and ankles to visit the lawyer.

It is worth mentioning that Ahmad Zahran, 42, a resident of Deir Abu Mash’al village west of Ramallah, has spent 15 years imprisoned in Israeli jails.

He is now on hunger strike for the second time in 2019, his previous 39 day long hunger strike ended after Israel promised to release him, yet the occupation authorities renewed his administrative detention.

As for the prisoner Musab al-Hindi, 29, the Israeli High Court rejected an appeal made by his lawyer two days ago and left him under administrative detention.

Al-Hindi, a resident of Tell town, southwest of Nablus, received a total of 24 administrative detention orders against him, as he was detained on September 4th, 2019.

Last year, al-Hindi went on a hunger strike for 35 days and ended it after an agreement to release him on September 9th, 2018, yet the Israeli occupation authorities imprisoned him again, issuing a six-month administrative detention order.

There are approximately 500 Palestinians currently being held under Israel’s illegal policy of administrative detention, under which prisoners can be held for renewable six-month periods, without charge or trial.