Local sources identified the two detainees as Abdul Fattah Bernat and Hamouda Sabawi. The participants were violently attacked and chased by the IOF within the town’s neighborhoods amid heavy firing of teargas bombs and rubber bullets.

During the march, the protesters chanted slogans against Israeli continued attacks against Islamic and Christian holy sites, holding photos of the prisoner Yasser Hamdouni who recently died in Israeli jails due to deliberate medical neglect.

The Popular Committee in Bil’in said the protesters marched towards the gate of the Annexation Wall, before the soldiers assaulted them, and kidnapped five, including two Palestinians who were forced out of a car.

The Committee added that the soldiers also abducted two activists; one Israeli and one from Britain.

The protesters marched towards the memorial of Bassem Abu Rahma, where he was killed after a soldier fired a gas bomb that directed struck him in the chest, in April of 2009.

It is worth mentioning that Bassem’s sister, Jawaher Abu Rahma, was killed by the army on January 1, 2011.

The soldiers also assaulted journalists and forced them away, under the allegation that the area is a “closed military zone.”

The Popular Committee said the protests will continue despite the escalating Israeli violations, and added that the Palestinians are protesting for their legitimate rights, for their lands and livelihoods.
Palestinian young woman released

Shalalda, a member of the student council at the Palestine Polytechnic University, was received by her family at Jubara military checkpoint in Tulkarem.

She was arrested on April 16, 2016 from her house and sentenced to eight months.

Shalalda’s father is still detained in Israeli jails as his administrative detention was renewed for four months few days ago for the third consecutive time.
Army Kidnaps Two Palestinians From Jenin And Hebron

Israeli soldiers kidnapped, Friday, two Palestinian men from the northern West Bank district of Jenin and Hebron, in the southern part of the West Bank.

The Palestinian Prisoners Society (PPS) stated that the soldiers, stationed at the Za’tara military roadblock, south of the northern West Bank city of Nablus, have kidnapped a young, identified as Hamza Emad Abu Arra, from Aqaba town, south of Jenin.

The PPS added that the soldiers also kidnapped Waleed Mohammad Sabarna, 36, from Beit Ummar town, north of Hebron, while he was traveling to Jordan, and took him to an unknown destination.
Israeli authorities sentence a number of Jerusalemite sit-inners

The Israeli central court sentenced three Palestinian elderly men to 14 months imprisonment and imposed on them a fine of 15,000 shekels for affiliation with a "banned group" in al-Aqsa Mosque.

The detainees’ lawyer said that Israeli authorities are working on criminalizing the Palestinian presence in al-Aqsa Mosque in order to impose a status quo in the compound.

The lawyer pointed out that a large number of Palestinian youths were detained over the past few months under the same pretext.
Israel To Release Wounded Palestinian Woman, Whose Fiance Was Killed On September 16 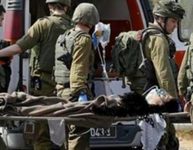 Lawyer Karim Ajwa, of the Palestinian Detainees Committee, has reported that the Israeli authorities decided to release a wounded young woman from Hebron, who was injured, while her fiance was killed, after the soldiers opened fire on their car following what the army alleged an “attempted vehicular attack.”

Ajwa stated that the wound woman, Raghad al-Khdour, 18, from Bani Neim town near Hebron, in the southern part of the West Bank, was injured on Friday September 16, while her fiance, Firas Mousa al-Birawi Khdour, 18, was killed, after the soldiers fired a barrage of bullets on their car.

Raghad was moved to Shaare Zedek Israeli medical center, and has been there since then, while the army was still claiming she and her slain fiancé deliberately tried to ram the soldiers, near Keryat Arba’ Israeli colony, illegally built on Palestinian lands in Hebron.

Palestinian Medical sources said Raghad will be moved to the Palestine Medical Complex, in Ramallah, within the coming 48 hours.

Raghad is the sister of a young woman, identified as Majd Abdullah al-Khdour, 19, who was killed  by Israeli army on June 24, 2016, in the same location.
29 sept 2016
Israel sentences ex-Palestinian Minister to 12 months in jail

An Israeli occupation court on Wednesday morning sentenced the former Palestinian Minister of Detainees, Wasfi Qubha, to 12 months in jail.

Qubha’s family said the Israeli Salem military court in western Jenin province issued a 12-month prison-term and another 18-month suspended sentence, along with a fine of 2,000 shekels, against their relative.

She added that her husband was arrested in May from his own family home in Jenin and is currently locked up in the Israeli Meggido jail, in 1948 Occupied Palestine.

Qubha has spent a total of over 12 years in Israeli lock-ups. He has been diagnosed with chronic diseases, including hypertension and diabetes.

Human rights groups warned of a projected exacerbation to rock Qubha’s health as a result of deliberate medical negligence in Israeli jails.
Army Kidnaps A Father And His Son Near Ramallah 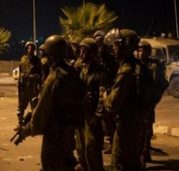 Israeli soldiers and uncover officers invaded, on Thursday at dawn, the town of Silwad, east of the central West Bank city of Ramallah, searched many homes and cars, and kidnapped a father and his son, who are also former political prisoners.

They added that the soldiers violently searched the property after detonating the front door, and interrogated the family before kidnapping the father and his son.

The family said that the soldiers also searched all cars in the neighborhood, including Abdul-Hadi’s car and confiscated it.

It added that female soldiers were among the invading forces, and took the women into a separate room, and searched them while interrogating them.

It is worth mentioning that Amin suffers with various chronic illnesses, and previously spent many years in Israeli prisons and detention centers, while his other son, Akram, is serving a 17-year prison sentence.
PPS: “Israeli Soldiers Kidnap 43 Palestinians, Including Children And A Legislator, Wednesday”

The Palestinian Prisoners Society (PPS) has reported that Israeli soldiers have kidnapped, late at night and on Wednesday, at least 43 Palestinians, including children a legislator, in different parts of the occupied West Bank, including occupied Jerusalem.

The Jerusalem office of the PPS said the soldiers kidnapped 20 Palestinians from Jerusalem, most of them from Shu’fat refugee camp, in addition to Beit Hanina, Abu Dis, Wadi al-Jouz and Qalandia refugee camp.