The Israeli Central Court on Sunday decided to release a 15-year-old Palestinian girl from prison.

Natali Shoukha was arrested by the Israeli occupation forces on April 29, 2016.
24 administrative terms issued against Palestinians in Israeli jails

The Israeli occupation authorities (IOA) issued 24 administrative sentences against Palestinian detainees, with neither charge nor trial, a lawyer reported Sunday.

According to lawyer Mahmoud al-Halabi, from the Palestinian Prisoners Society, the IOA sentenced 24 Palestinians to administrative prison-terms for periods ranging from three to six months.

The list included 10 sentences against Palestinians who have already been held administratively, without trial, in Israeli jails.

Prisoners Youssef Abdul Rahim Khatib, from Occupied Jerusalem, Mazen al-Natsheh, from al-Khalil, Fadi Sourour, also from al-Khalil, Ibrahim Dahbour, from Jenin, and Moussa Sawarka, from Bethlehem, along with Ramallah natives Kifah Kizmar and Mahmoud Namer, were all sentenced to a six-month administrative term.

The Israeli occupation forces (IOF) at daybreak Sunday stormed a Palestinian blacksmith shop in al-Shouyoukh town, northeast of al-Khalil, and seized all its equipment.

A PIC news correspondent said heavily armed Israeli patrols, escorted by military vehicles and a truck, rolled into a lathe owned by al-Kurki family in al-Shoyoukh and confiscated all the machines and equipment, before they sealed off its doors on claims that it is used to manufacture weapons.

The assault falls in with a mass abduction sweep launched by the IOF across al-Khalil and Bethlehem.

Reporting from al-Khalil, a PIC correspondent said the Israeli troops wreaked havoc on the family home of ex-prisoner Luay al-Tawil before they seized his car.

A number of Palestinian anti-occupation protesters were kidnapped by the IOF in the campaign.
Israeli Authorities Issue Orders Preventing 15 Palestinian From Entering Al-Aqsa Mosque

The Israeli authorities issued, Sunday, orders against fifteen Palestinians from occupied East Jerusalem, denying them entry into the Al-Aqsa Mosque, and its courtyards, for periods varying between 15 days and six months.

The Palestinians were detained during several previous Israeli military invasions and searches of homes, in different parts of Jerusalem, mainly in the Old city.

They were all released last night, and at dawn Sunday, after the orders were issued against them, denying them access to the Al-Aqsa Mosque.

The orders are similar to ones taken by Israel last week, denying many Palestinians, including Aqsa Mosque workers, access to the holy site, and its courtyards.

Furthermore, Israel closed occupied Jerusalem to all Palestinians from the West Bank, starting from today until April 17th, while it celebrates the Jewish Pesach.
Israeli Soldiers Abduct A Child Near Bethlehem

The PPS stated that the soldiers invaded the home of Waleed Sabri, violently searched the property while interrogating the family, and abducted his son, Mohammad, 16.

The soldiers also drove around the town, and withdrew later, taking the child to the Etzion military base and security center, south of Bethlehem.
Scores of Palestinians kidnapped by IOF in J’lem and al-Khalil

Two other citizens in Jerusalem identified as Rami al-Fakhouri and Mohamed al-Daqaq received summonses for interrogation from the Shin Bet, according to local sources.

Meanwhile, the Israeli police decided to close Jerusalem from April 9 until 17 of the same month to only West Bank citizens on the occasion of the Hebrew Passover (Pesach) festival.

In al-Khalil, a large number of Israeli troops ransacked homes in different areas of al-Khalil and kidnapped citizens.

Soldiers also broke into and pillaged the house of 23-year-old Shadi an-Najjar in Abu Katila neighborhood before rounding him up.

Another three young men were taken prisoners during raids on their homes in different areas of al-Khalil.

In addition, the IOF stormed the house of ex-detainee Louay Attawil in Abu Ruman neighborhood in the city and confiscated his car. Homes of seven ex-detainees were also raided during the same campaign.

In Beit Ummar town, north of al-Khalil, the IOF kidnapped in dawn raids on homes three young men and detained a woman for a while before releasing her, according to a local activist.

The detainees were identified as Ziyad Bahar, 38, Ramzi Akhlil, 27, and Sabri Awad, 23.

Israeli soldiers also detained a 55-year-old woman called Ruwaida as-Salibi for a while, confiscated her ID card and severally beat her son Alaa, a 26-year-old ex-detainee, in order to pressure another son of hers to turn himself in.

Soldiers also physically assaulted another ex-detainee called Khaled Sabarneh, 25, without arresting him before withdrawing from the town.

Israeli soldiers abducted, overnight and at dawn Sunday, at least seventeen Palestinians in different parts of occupied East Jerusalem, in the West Bank, during extensive and violent searches of homes and property.

The Palestinian Prisoners’ Society (PPS) has reported that the invasions and abductions were largely concentrated in the Old City, and its surrounding areas, and added that the soldiers interrogated many Palestinians, while ransacking their homes.

In addition, the soldiers summoned Rami Fakhouri and Mohammad Diqdaq for interrogation, at a military and security center, in the occupied city.

In related news, the Israeli army declared Jerusalem as a closed zone to all Palestinians, starting from today until April 17th, the end of the Jewish Pesach feast.

Meanwhile, many fanatic groups in Israel started calling and planning for extensive invasions, and provocative tours into the Al-Aqsa Mosque and its courtyards, along with several invasions in the Old City of occupied Jerusalem.
8 apr 2017
Israeli Soldiers Abduct Three Palestinian Children In Bethlehem And Nablus

Israeli soldiers invaded, on Saturday at dawn and Friday evening, the West Bank governorates of Bethlehem and Nablus, and abducted three children.

The Bethlehem office of the Palestinian Prisoners’ Society (PPS) said the soldiers invaded the Saff Street area, in the center of the city, and abducted As’ad Mohammad Abu ‘Ahour, 16, after breaking into his family’s home and violently searching it.

In Nablus, in northern West Bank, the soldiers abducted two children, identified as Mohammad Hatem and Khalil Mohammad Ghazal, in Sebastia town, north of the city.

Local sources said the soldiers invaded the town, and opened fire on several residents, before abducting the two children; there have been no reports or injuries.
Ex-prisoner: Palestinian prisoners plan to launch hunger strike

The newly released prisoner Ali al-Haj revealed, in an interview with the PIC reporter, that Palestinian prisoners have finalized their preparations for the biggest hunger strike in Israeli jails.

Al-Haj, 35, was released from Israeli jails two days ago after spending a 13-year sentence for being affiliated with Palestinian resistance.

Speaking to the PIC reporter, he stressed that Palestinian prisoners are scheduled to launch a collective hunger strike in all Israeli jails on April 17 in protest against their difficult detention conditions.

The strike is being organized by Fatah Movement’s high-ranking member Marwan Barghouthi, who was sentenced in 2004 to five consecutive life terms and is being held in a prison in southern Israel.

The prisoners’ demands include improving their detention conditions, ending night raids and strip search, and providing telephone communication with their families, al-Haj pointed out.

He also stressed the urgent need to increase the popular support to the prisoners’ planned strike and legitimate demands.

The Israeli Prison Service tried over the past few days to manipulate over the prisoners’ demands, he added.

The hunger strike in scheduled to begin on 17 April, commemorated each year as the Palestinian Prisoners' Day.
7 apr 2017
Professor Ashkar suffers stroke in Israeli jail

Ashkar's wife told the PIC reporter that her husband suffered a stroke during his stay at Raymond prison's hospital, expressing concern over his health condition which she described as very bad.

Ashkar suffers from many diseases and had previously gone through dangerous health deterioration in Israeli jails due to the absence of appropriate treatment and the Israeli authorities' insistence on detaining him.

Ashkar is a lecturer and a professor of physics at al-Najah University. He was arrested and administratively detained several times. The last time he was arrested was on 24th November 2016.

Professor Esam al-Ashkar was born in Saida town in Tulkarem province, and he is a father of five boys and a girl. After he graduated from high school with great success, he started to study physics at Yarmouk University in Jordan.

Ashkar received his bachelor's degree in 1980 and a scholarship for master's study in the same specialization in the University of Jordan in 1982 where he worked as assistant professor. He finally moved to work as a lecturer at al-Najah University in Nablus between the years of 1982-1984.
Israeli Court Sentences Two Palestinian Children From Jerusalem To House Arrest, Imposes Fines 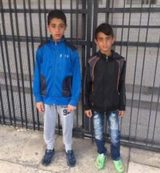 An Israeli court in occupied Jerusalem, sentenced two Palestinian children, only 12 and 14 years of age, from Silwan town, south of the Al-Aqsa Mosque, in the occupied city, to house arrest and imposed high fines on them.

The two children have been identified as Yazan Froukh, 14, and Yousef Hijazi, 12, both from Silwan town. They were abducted, on Thursday morning, and were sent to an interrogation center in the city.

Later in the day, the two children were sent to a court in Jerusalem, and were sentenced to house arrest, in addition to a fine of 2000 Israeli Shekels each, as a precondition for their release.
Israeli Soldiers Abduct Four Palestinians In Bethlehem and Nablus 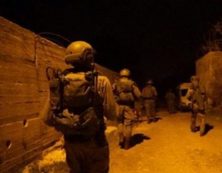 The Palestinian Prisoners Society (PPS) has reported that Israeli soldiers have abducted, on Friday at dawn, an elderly man and a young man from Bethlehem, and two young men fr[om Nablus, in the occupied West Bank.

The Nablus office of the PPS said the invasion was carried out by dozens of soldiers, and targeted many neighborhoods in the city, especially the eastern and western areas, where the soldiers searched and ransacked many homes.
Israeli Soldiers Abduct Four Palestinians In Silwad

Dozens of Israeli soldiers invaded, on Friday at dawn, the town of Silwad, northeast of Ramallah, in central West Bank, broke into and ransacked several homes, and abducted four Palestinians, in addition to preventing local mosques from opening for dawn prayers.

The soldiers violently invaded and searched many homes in the town, illegally confiscated cars and sums of cash, tore many permits of laborers who work in Jerusalem, and confiscated several others.

It is worth mentioning that Ahmad is the father of Malek Hamed, who was detained by the army after killing an Israeli soldier and mildly wounding another, in what the military described as a “deliberate ramming attack.”

During the invasion of the family home, the soldiers took measurements of the property, in preparation for demolishing it later.

Furthermore, the soldiers prevented local mosques for opening for dawn prayers, and prevented the local from heading to them.
Page:  5 - 4 - 3 - 2 - 1
Powered by