Media sources said the soldier abducted the Palestinians, who remained unidentified at the time of the report, and took them to an unknown destination.

On Saturday morning, one of the injured Palestinians, a child identified as Azzam Hilal Oweida, 14, died of a serious gunshot wound he suffered Friday, after an Israeli army sharpshooter shot him with a live round in the head, east of Khan Younis.
Israeli Soldiers Abduct A Palestinian In Hebron

Israeli soldiers abducted, on Saturday at dawn, a young Palestinian man from his home in Hebron, in the southern part of the occupied West Bank.

The Hebron office of the Palestinian Prisoners’ Society (PPS) said the soldiers invaded the Old City of Hebron, searched homes and abducted Fawzi Sa’adi Rajabi, 25, before moving him to an unknown destination.

It added that the soldiers also invaded many neighborhoods in Hebron, and installed a roadblock at its northern entrance, in Jouret Bahlas area, in addition to the main entrances of Halhoul and Sa’ir nearby towns, before stopping and searching dozens of cars, and interrogated many Palestinians while inspecting their ID cards.
Army Abducts One Palestinian Near Bethlehem

Israeli soldiers abducted, on Saturday at dawn, a young Palestinian man from his home in Beit Fajjar town, south of Bethlehem in the occupied West Bank.

The soldiers interrogated the Palestinian and his family, while searching their property, and took him to Etzion military base, south of Bethlehem.

In related news, the soldiers closed the “Container Roadblock” northeast of Bethlehem, and prevented the Palestinians from crossing in both directions, causing a huge traffic jam.

The permanent roadblock in situated on the only road that links Bethlehem and Hebron with the rest of the occupied West Bank.
27 apr 2018
2 Palestinians kidnapped by Israeli soldiers near Jerusalem

The Israeli occupation forces on Friday kidnapped two Palestinians allegedly after they attempted to enter territories occupied in 1948 via Ein Yael checkpoint, near Occupied Jerusalem.

According to the Hebrew-speaking Yediot Ahronot newspaper, the two arrestees are natives of al-Khalil and Beit Jala, in the southern occupied West Bank.

The occupation army claimed the two detainees were holding a bomb, a knife and a sum of money.

The Israeli military intensified presence across the occupied West Bank in an attempt to crack down on protesters taking part in rallies denouncing Israel’s illegal settlement activity and in support of the Great March of Return staged along the Gaza border.
3 Palestinian detainees tortured by Israeli forces 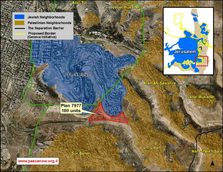 Three Palestinians have been subjected to violent beating by the Israeli occupation forces prior to their detention.

According to the Commission of Prisoners’ and Ex-Prisoners’ Affairs, the Israeli military attacked 23-year-old Akram al-Atrash, from the Duheisheh refugee camp, in Bethlehem, after they stormed his relatives’ home at nightfall.

Israeli soldiers beat al-Atrash’s head against the wall and the kitchen sink, leaving him bleeding. He had also been enduring excoriating pains in his shoulder as a result of the violent beating, following which he was dragged to the Ofer detention center.

Some six months ago, al-Atrash was hit with Israeli bullet fire, causing him severe pains in his chest, left lung, stomach, and shoulder.

The detainee underwent medical check-ups at the Israeli Hadassah Ein Kerem Hospital but has not received proper medical treatment.

The occupation forces also attacked Ahmed al-Amour, from Tekou’ town, after they broke into his family home overnight. He was later taken to the Etzion detention center, where he had been verbally and physically assaulted by Israeli soldiers while being handcuffed and blindfolded in an attempt to force him to confess to the alleged charges.

33-year-old Mohamed Jarrar, from Jenin, had also been heavily beaten for over 18 hours during the investigation procedure at al-Jalama detention center before he was transferred to the Meggido dungeon.
Israeli Soldiers Abduct Five Palestinians In The West Bank

The Palestinian Prisoners’ Society (PPS) has reported that Israeli soldiers abducted, on Friday at dawn, five young Palestinian men, after invading and searching their homes in Bethlehem, and Qalqilia.Several army jeeps invaded Far’ata village, east of the northern West Bank city of Qalqilia, before the soldiers stormed and searched homes, and abducted two young men, in their twenties.

The two abducted residents have been identified as Ehsan Saleh Tawil, a student of the Najah National University in Nablus, and his cousin Shehab Tawil.

On Thursday at night, the soldiers closed the main entrance of Azzoun town, east of Qalqilia, after the army attacked protesters, and fired live rounds and rubber-coated steel bullets, while several young men hurled stones at the invading army jeeps.

They added that the two Palestinians suffered moderate-but-stable wounds and were rushed to a local hospital.
26 apr 2018
Israel issues 300 house arrest orders against Palestinian children

The Commission of Prisoners’ and Ex-Prisoners’ Affairs kept record of 300 cases of house arrest against Palestinian children living in Occupied Jerusalem since late 2015.

Speaking following visits to Palestinian children sentenced to house confinement, Qaraqe said 300 children have received house arrest orders since October 2015, 20 among whom are still confined inside their family homes.

Qaraqe added that most of the children he met were arrested right after they ended their house confinement terms, which ranged from six months to one year.

In such cases, Palestinian parents are forced to turn into their children’s jailers lest they get penalized, fined, or jailed by the Israeli occupation authorities.

“The policy of house arrest is a punishment both for the child and his/her parents,” warned Qaraqe. “It certainly inflicts serious repercussions on the child’s body and psyche, which affects his/her present as it does his/her future.”
IOF kidnaps Palestinian from his home in Jenin

The Israeli occupation forces (IOF) at dawn Thursday kidnapped a Palestinian citizen from his home in Jaba town, south of Jenin in the West Bank.

Local sources told the Palestinian Information Center (PIC) that Israeli soldiers spread through the town’s streets before breaking into and ransacked the house of Jihad Fashafisha in the town.

They added that soldiers rounded up Fashafisha and took him to an undeclared place. The reason for his arrest is still unknown.

Israeli soldiers closed, Thursday, the entrances of Palestine Technical University – Kadoorie, al-‘Arroub Branch, north of the southern West Bank city of Hebron, and prevented the students and faculty from entering it, before wounding four.

The WAFA Palestinian News Agency said the Israeli Military Commander in southern West Bank has issued an order closing the main road, and entrances of the educational facility.

It added that the soldiers prevented the students and faculty members from entering the educational facility, an issue that forced them to take alternate, unpaved roads through Beit Ummar nearby town.

Many students protested the military violation against their educational facility, while the soldiers fired rubber-coated steel bullets and gas bombs, wounding four.

It is worth mentioning that, on Wednesday, the soldiers abducted a young Palestinian woman, a student of Kadoorie, and injured several students.

On Wednesday at night, the soldiers shot two young Palestinian men after opening fire at their car in Halhoul town, north of the southern West Bank city of Hebron.

On Thursday at dawn, the soldiers abducted a wounded Palestinian teen from his home in Deheishe refugee camp, south of Bethlehem, and injured several other Palestinians.

Also at dawn, the soldiers abducted Kamal al-Khatib, from his home in Deir Dibwan, east of the central West Bank city of Ramallah, and Jihad Khaled from Jaba’ town, southwest of Jenin, in northern West Bank.
Israeli Soldiers Abduct A Wounded Teen In Bethlehem

Israeli soldiers abducted, on Thursday at dawn, a wounded Palestinian teen from his home in Deheishe refugee camp, south of Bethlehem, and injured several other Palestinians.

Media sources in Bethlehem said the soldiers invaded the family home of Hussein Eyad Shahin, 17, and searched the property before abducting him.

It is worth mentioning that, in December of last year, the soldiers shot Shahin with three live rounds in his leg during an invasion into the refugee camp. 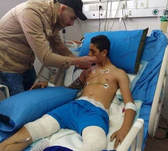 An injured Palestinian boy was kidnapped at daybreak Thursday after the Israeli occupation forces broke into the Duheisheh refugee camp, south of Bethlehem province.

Local resident Emad Shaheen said the occupation forces wreaked havoc on the family home of his injured nephew Hussein Shaheen, 16, after they blew up the entrance gates.

The break-in culminated in the abduction of Hussein, who has reportedly been enduring excruciating pains as a result of an injury inflicted by Israeli bullet fire in December after he was shot in his feet with three bullets. Hussein had his artery severed and underwent a surgery to save his life.

Shaheen said he told the Israeli occupation forces about the minor’s critical health condition but they paid no heed.

At the same time, a number of Palestinian protesters sustained live bullet wounds and others choked on teargas fired by the Israeli military all the way through the assault.

Palestinian anti-occupation youth responded to the attack by hurling stones and empty bottles at the heavily-armed occupation patrols.
25 apr 2018
Army Abducts A University Student In Hebron, Injures Several Others

In related news, the soldiers fired rubber-coated steel bullets, gas bombs and concussion grenades at many students and locals, participating in the celebration, coordinated with the Palestinian Prisoners’ Society (PPS) honoring seven Kadoorie students, who were recently released from Israeli detention camps.

Medical sources said one Palestinian was shot with a rubber-coated steel bullet, and several others suffered the effects of teargas inhalation.
Including A Former Political Prisoner, Army Abducts Two Palestinians Near Jenin

Israeli soldiers abducted, on Wednesday at dawn, two young Palestinian men, including a former political prisoner, after invading and searching their homes in Burqin town, southwest of the northern West Bank city of Jenin.

The soldiers searched a few homes, and interrogated many Palestinians while inspecting their ID cards, and withdrew later taking the two young men to an unknown destination.

In related news, several army jeeps invaded Beit Ummar town, north of Hebron, searched the home of Sakher Hussein Awad, in ‘Aseeda area, and summoned him for interrogation in nearby Etzion military base and security center.

The soldiers also invaded the home of Sakher’s father, Hussein Awad, and violently searched it while interrogating the family.

In addition, several armored military vehicles and bulldozers invaded Palestinian lands near the border fence in Jabalia, in northern Gaza, and bulldozed them in addition to installing sand hills.
Israeli Soldiers Abduct Two Palestinians In Jerusalem, And One In Bethlehem

Israeli soldiers abducted, on Wednesday at dawn, two young Palestinian men from their homes in the al-‘Isawiya town, in occupied Jerusalem, and one Palestinian in Bethlehem.

The soldiers abducted Ahmad Yousef Obeid and Waseem Dari, after invading their homes and searching them in al-‘Isawiya, and moved them to an interrogation facility.

The soldiers also invaded and ransacked many homes in the town and interrogated several Palestinians while inspecting their ID cards.

In addition, several army vehicles invaded the Saff Street area, in Bethlehem city, and abducted a young man, identified as Mahmoud Hammad, after breaking into his home and searching it.

In related news, the soldiers invaded Khallet ad-Darba area, in ‘Azzoun town, east of the northern West Bank city of Qalqilia, to abduct a young man, identified as Amro Abu Haniyya, but failed to find him for the fourth consecutive time.

The soldiers also invaded Halhoul town, north of the southern West Bank city of Hebron, and drove around several neighborhoods.

It is worth mentioning that the Israeli army said its soldiers arrested eight Palestinians in several parts of the West Bank, and confiscated around 240.000 shekels from homes of what it called “Hamas affiliates” in Beit Fajjar and Bethlehem city.
Page:  9 - 8 - 7 - 6 - 5 - 4 - 3 - 2 - 1
Powered by