The Belgian capital Brussels is set to host an international conference starting on Saturday on the Palestinian children detained in Israeli prisons.

Abdul-Naser Farwana, the head of the documentation unit at the Palestinian Detainees and Ex-Detainees Affairs Commission, said that the two-day conference is organized by the European Coalition for Palestinian Prisoners Rights.

Farwana told Quds Press that the conference will witness the participation of the Palestinian minister of prisoners' affairs Qadri Abu Baker, human rights organizations, ex-prisoners, notables, pro-Palestinian groups, and peace activists from all over the world.

Farwana said that the conference will shed light on the Palestinian child detainees and the violations and torture they are subjected to in Israeli jails. It will also include documentary films, photo exhibitions, and testimonies by ex-prisoners who served different sentences in Israeli prisons.

Israel is holding nearly 6,500 Palestinians in its lock-ups, 1,500 of whom have health issues, 400 are under the age of 18, 450 are detained without charge or trial, and 9 are members of the Palestinian Legislative Council.
Watch: Israeli prisons rob Palestinians of their childhood
Israel forbids Palestinians from traveling on the highway in certain areas without a permit. Palestinians can reach the road only by going through military checkpoints.

Israeli settlers are not subjected to the same restrictions.

“Israel has the dubious distinction of being the only country in the world that systematically prosecutes between 500 and 700 children in military courts each year,” according to the No Way to Treat a Child campaign.

Ahed Tamimi became an icon of Palestinian child prisoners after spending eight months in jail for slapping and shoving a fully armed Israeli soldier in a video recorded by her mother during December 2017. She was 16 at the time and turned 17 in prison.

Shortly before Ahed slapped a soldier, Israeli troops shot in the head and seriously injured her 15-year-old cousin Muhammad Fadel Tamimi. The Israeli authorities then lied about the incident, by saying he “fell off his bike.”

Ahed’s 15-year-old brother Muhammad Bassem Tamimi was detained earlier this month from the family’s home in the West Bank village of Nabi Saleh.

Throwing stones is a common charge Israel uses against Palestinian children, which is “punishable under military law by up to 20 years in prison,” Addameer notes.

Last year, Minnesota representative Betty McCollum introduced the first bill in the US Congress that would prohibit Israel from using any of the billions it receives annually in military aid for the detention, torture and abuse of Palestinian children.

The bill currently has 30 co-sponsors.

During March, 205 children were held in Israeli jails, more than 30 of whom were under 16.

“A lot happened to me in prison, and when I left I noticed a lot had changed,” Obaida says in the film.

During a conversation with a friend who was also imprisoned by Israel, the pair bond on the difficulties and lessons of being detained.

“When I was in prison, I used to look forward to my court dates because it meant a change of scenery,” Obaida’s friend tells him in the film.

“On visitation days, you’d see your parents. That was the only good thing about prison.”

“Nothing is good in prison,” Obaida responds, and they both agree, although adding that the difficulties of being a child in Israeli prison has taught them patience.

“I learned how to cook and to work with others, and how to be polite and respectful,” Obaida says.

Despite being released from prison, Obaida says his happiness is not complete.

“I feel freedom but it is not complete freedom. We first have to be liberated [from the occupation] before I can feel that am truly free.”
IOF attacks Palestinians with tear gas in Jenin

Scores of Palestinian citizens on Thursday evening suffered from their exposure to tear gas fumes at the southern entrance to Jenin city after the Israeli occupation forces (IOF) stormed the area and clashed with local youths.

Local sources told a reporter for the Palestinian Information Center (PIC) that Israeli soldiers fired volleys of tear gas grenades at Palestinian citizens, young men and homes at the junction of al-Shuhada in southern Jenin.

They added that many citizens inside their homes also suffered from inhaling tear gas.

They said that the events started after the IOF set up a checkpoint at the junction that leads to Jenin and Qabatiya town.

The IOF also stormed last night Yamun town in the west of Jenin and kidnapped a young man identified as Jihad Furaihat.

They also set up a checkpoint on the Jenin-Haifa road near the Ta’nak junction, intercepted Palestinian cars and checked the IDs of passengers.
Israeli police bar Jerusalemite from entering Aqsa for several days

The Israeli occupation police on Thursday banished a Jerusalemite young man from the Aqsa Mosque for several days.

According to Wadi Hilweh Information Center, the Israeli police decided to ban Ameer al-Zaghir from entering the Aqsa Mosque for four days, with no reason.

The young man was rounded up on Thursday morning and taken to a police station in the holy city for interrogation.
25 apr 2019
Palestinian prisoner suspends 29-day hunger strike

The Prisoners and Former Prisoners' Affairs Committee said that Farraj, 31, who is a resident from Dheisheh refugee camp in the southern occupied West Bank district of Bethlehem, suspended his 29-day hunger strike after his lawyer reached an agreement with the Israeli prosecution.

The agreement stated that Farraj’s administrative detention would not be renewed, meaning he is to be released by October 23rd 2019.

Farraj was detained on January 23rd 2018 from the southern West Bank district of Bethlehem; the Israeli authorities immediately issued a administrative detention order against him.

On March 26th 2019, Farraj declared an open hunger strike, as a form of protest against his administrative detention, however, was forced to suspend it as his health was deteriorating.

According to prisoners rights group Addameer, there are 5,450 Palestinian prisoners being held in Israeli prisons, of whom 497 are in administrative detention, and 48 female prisoners, and 205 minors, 32 of whom under 16 years old.

Four Palestinian prisoners have been on open-ended hunger strike for several days in protest at their detention administratively, with no trial or indictment.

The hunger strikers are Husam al-Razza and Mohamed Tabanja and they have been on hunger strike for about 38 days and 30 days respectively, while Hasan al-Aweiwi and Odeh al-Haroub started their hunger strike together on April 2, 2019.

According to the Palestinian Prisoner Society, these four hunger strikers are being exposed to suppressive measures by the Israeli prison service, including solitary confinement and repeated transfers.

The hunger strikers are also deprived of seeing their families and hardly can see their lawyers.
Israeli court extends remand of wounded prisoner 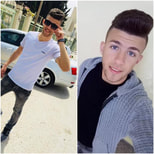 The Salem military court has extended the detention of wounded prisoner Omar Younis, 20, for seven days.

According to the Palestinian Commission of Detainees’ and Ex-Detainees’ Affairs, prisoner Younis is currently in the intensive care unit at Beilinson Hospital.

The Israeli occupation forces arrested Younis a few days ago after they shot him at Za’atara checkpoint in Nablus city on allegations that he tried to carry out a stabbing attack.
Israeli forces detain 3 Palestinians in West Bank raids

According to Palestine Prisoner’s Society (PPS), Israeli forces detained one Palestinian in the southern West Bank district of Hebron. He was identified as Louay Faysal al-Hashlamon.

In the Beit Iksa village, northwest of the central West Bank district of Jerusalem, another Palestinian was detained and identified as Shihab Hussam Ghareeb.

PPS mentioned that Israeli forces raided Ghareeb’s family home prior to his detention.

In the central West Bank district of Ramallah, PPS said one Palestinian was detained. He was identified as Anas Mahmoud Said.

According to prisoners rights group Addameer, there are 5,450 Palestinian prisoners being held in Israeli prisons.
PCHR: “Israeli Authorities Arrest Patient’s Companion While Returning to Gaza Strip”

The Palestinian Center for Human Rights (PCHR) strongly condemns that the Israeli authorities stationed at Beit Hanoun “Erez” Crossing arrested a patient’s companion, from the Gaza Strip, while returning to the Gaza Strip.

According to PCHR’s investigations, at approximately 12:00 on Tuesday, 23 April 2019, the Israeli authorities arrested Karam Mustafa Mohammed Tantawi (51), from al-Qal’a buildings, south of Khan Younis. Karam, who was accompanying his wife Safa’ ‘Abed al-Majeed Tantawi (47), a cancer patient, was arrested while returning to the Gaza Strip after his wife received treatment at al-Makassed Hospital in Jerusalem.

It should be noted that the PCHR’s lawyer, in his capacity as the legal agent for al-Tantawi, was prevented today from visiting him in al- Majdal Prison. The court extended his arrest until next Tuesday, 30 April 2019.

PCHR stresses that the ongoing Israeli forces policy of arresting patients and their companions is considered as violation of the international human rights law and the international humanitarian law. It also constitutes a form of inhuman and degrading punishment, which coincides with the policy of tightening the illegal closure imposed on the Gaza Strip. This aggravates the patients’ suffering as their treatment is not available in the Gaza Strip hospitals.

In light of the above, PCHR: