The Israeli occupation forces (IOF) on Saturday arrested a Palestinian citizen while he was working in his farmland in Shufa village in Tulkarem near the Israeli settlement Avni Hefetz.

Tahsin Hamed, the detainee's uncle, said that the IOF soldiers stormed the land where his nephew Esam Hamed, 33, was working and abducted him.

Tahsin Hamed said that the IOF soldiers regularly assault and arrest the Palestinian farmers whose lands are close to Avni Hefetz under the pretext that they "pose a threat" to the Israeli settlers living there.

He added that three years ago the IOF attacked his nephew's farmland and destoryed its trees, crops, and greenhouses.

The Israeli authorities, further, are currently expanding the settlement, which was built illegally on privately-owned Palestinian lands, at the expense of vast tracts of farmland.
Palestinian Detainees Declare Hunger Strike

Palestinian political prisoner held by Israel stated that many detainees have decided to start hunger strike this coming Sunday, while more detainees will be joining the strike which will expand to all prisons if Israel does not respond to their demands.

Among the main demands of the detainees are improving their living conditions, providing medical treatment, visitation rights, in addition to removing wireless signal jammers due to the health risk they could pose.

Israeli daily Haaretz quoted sources among the detainees saying that the Israeli government has expressed a willingness to remove cellphone gammers to prevent the strike, but added that the office of Israeli Public Security Minister Gilad Erdan strongly denied the allegations.

It stated that some meetings took place between Israeli officials and detained members of Hamas movement, on Thursday, in addition to another meeting, Friday, this time including members of the Islamic Jihad.

Some of the demands presented by the detainees include resuming family visits of Gaza Strip detainees, in addition to cancelling the punishments imposed on all detainees in the Negev Desert Detention Camp, which were imposed earlier this week after two officers were reportedly stabbed.

The detainees are also demanding better items in the canteens and expanding their Television rights.

Many detainees will start the hunger strike, Sunday, and will later be joined by more detainees, while some of them also said their strike will include not drinking any liquids, including water.

Haaretz also stated that, although sources among the detainees said the Prison Authority has offered the installation of public phones, the office of Public Security Minister strongly denied the claims.

It added that the Israeli government proposed resuming the talks with the detainees after the Knesset elections, which will be held on Tuesday, April 9th, 2019, and stated that the detainees have agreed to discuss this proposal with their political factions, before coming to a decision by Saturday evening.

Haaretz also said that Israeli officials are trying to prevent the detainees from holding the hunger strike, especially since this could lead to massive protests across the West Bank and the Gaza Strip.

The Israeli Prison Service has already deployed additional soldiers in the prisons and detention centers, in anticipation of protests by the detainees.
Israeli Soldiers Abduct Two Palestinians In Bethlehem And Qalqilia 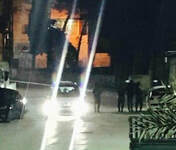 Israeli soldiers abducted, on Saturday at dawn, two Palestinians in Bethlehem and Qalqilia, in the occupied West Bank.

The soldiers installed a sudden military roadblock at the entrance of Beit Fajjar town, south of Bethlehem, searched many cars and interrogated dozens of Palestinians while inspecting their ID cards, before abducted ‘Aws Majed Thawabta, 30.

In addition, the soldiers abducted Ra’ed Salim Radwan, 23, at a military roadblock near Ezbet at-Tabib village, east of Qalqilia, in northern West Bank.

On Friday at night, the soldiers released Ahmad Abu Arafa and Tawfiq Abu Dheim, who were taken prisoner while leaving the Al-Aqsa Mosque, in occupied Jerusalem.

Prior to their release, the two Palestinians were handed orders preventing them from entering Al-Aqsa for two weeks.

On Friday evening, the soldiers abducted Rafat Najib Jerusalem’s Old City, and moved him for interrogation at the al-Qashla detention center near Hebron Gate.
Israeli Soldiers Abduct Five Palestinians In Jerusalem And Jenin

Media sources said the soldiers invaded the home of Ra’fat Najib in Jerusalem’s Old City and searched the property before abducting him.

They added that the soldiers also abducted Ahmad Abu Arafa and Tawfiq Abu Dheim, while leaving the Al-Aqsa Mosque.

The IOF announced that six Palestinian citizens were arrested during campaigns in different West Bank areas for allegedly being involved in anti-Israel activities.

The Israeli police on Thursday arrested a guard of al-Aqsa Mosque after severely beating him.

Quds Press said that an Israeli police officer attempted to enter Bab al-Rahma prayer area in al-Aqsa Mosque and walk over the prayer carpets with his shoes on, but the Aqsa guard Emran al-Rajabi prevented him.

The news agency reported that the Israeli police physically assaulted al-Rajabi, seized his mobile, handcuffed him, and took him to a nearby interrogation center. video

The incident is not the first of its kind as Israeli police officers regularly attack Aqsa guards and worshipers, try by all means to provoke their feelings, and show no respect to the holy site.
Army Abducts A Palestinian Child In Azzoun

Israeli soldiers abducted, on Thursday evening, a Palestinian child in Azzoun town, east of Qalqilia, in the northern part of the occupied West Bank.

It is worth mentioning that Azzoun has been under a strict Israeli military siege for the eighth consecutive day.

The Israeli army has been surrounding the village, and conducting repeated invasions of homes, in addition to abducting many Palestinians, including children from the town.
Israel arrests Palestinians over alleged Molotov cocktail throwing

Hebrew media sources on Thursday claimed that the Israeli army has arrested a Palestinian cell accused of throwing Molotov cocktails at an Israeli settlement in the West Bank.

Hebrew website 0404 reported that the Israeli army in March detained a group of Palestinian youths from Beit Fajjar town in Bethlehem for allegedly throwing Molotov cocktails at Migdal Oz settlement, which was built illegally on privately-owned Palestinian lands.

It added that the cell members are being held and interrogated at an Israeli detention center.
4 apr 2019
Israeli forces raid, shut down section 1 of Negev prison

Israeli suppression forces raided section 1 of the Israeli Negev prison, in southern Israel, on Thursday, and conducted searched among prisoners and their belongings.

The Palestinian Prisoners and Former Prisoners’ Affairs committee said that suppression forces shut down section 1 and transferred prisoners to other sections of the prison.

Tensions increased in the prison since morning hours.

Israeli suppression forces had assaulted a Palestinian prisoner at section 1 of the prison and transferred him to a unknown location, claiming that he threw hot water at an Israeli guard.

Tensions have continued to increase at the prison since February 19th, after the Israeli Prison Services (IPS) confiscated all electronic devices from inside section 1 after prisoners protested against the IPS installing jamming devices around sections of the prison.
Israel releases Palestinian after 16 years of imprisonment

PPS said that al-Hada was held at the al-Ramla prison clinic, where another 15 ill Palestinian prisoners are also held.

PPS pointed out that al-Hada suffered an injury as he was detained by Israeli forces, which caused him damage to the pelvic area, spine, in addition to other health issues.

According to prisoners rights group Addameer, there are 5,450 Palestinian prisoners being held in Israeli prisons.
Israeli Soldiers Abduct Thirteen Palestinians In West Bank

Israeli soldiers abducted, on Thursday at dawn, thirteen Palestinians from their homes in several parts of the occupied West Bank, and confiscated cash. The army also claimed to find weapons in some homes.

The Palestinian Prisoners Society (PPS) has reported that the soldiers invaded and violently searched dozens of homes, stores and warehouses in the West Bank, and interrogated many Palestinians while inspecting their ID cards.

The soldiers also illegally confiscated cash from some of the invaded homes, in Qabatia town, south of the northern West Bank city of Jenin.

In addition, the army said its soldiers found and confiscated weapons, apparently homemade, in Teqoua’ Palestinian town, east of Bethlehem.

A Palestinian child who went missing on Tuesday was eventually found in ‘Ofer’ prison, after Israeli soldiers kidnapped him from his village, Dir Nitham, north of the central West Bank city of Ramallah, and his family was never informed.

The child, Ramez Tamimi, 14, was kidnapped by Israeli soldiers during an invasion into his village, and the army never informed the family, the Red Cross, the District Coordination office or any other department that they have taken him prisoner.

The family started searching for their missing child on the same day of his abduction, and contacted the Palestinian police, the Palestinian District Coordination Office, and various departments, and a day later, the Israeli army said they have him in prison.

The child was kidnapped by the soldiers after three days of constant military invasions, and violent searches of Palestinian homes, including his family’s home, in the village.

The army is now claiming that the child is one of many Palestinians who are protesting in the village, and “involved in throwing stones at army jeeps and settlers’ cars,” on the main bypass road near the village.

Despite his young age, the child is a former political prisoner, who was abducted by and detained by soldiers two years ago from the village’s mosque, after the army invaded it.

It is worth mentioning that the Israeli army have abducted dozens of Palestinians from the village in the year 2018, among them more than twenty children, many of them were taken prisoner after the soldiers frequently stormed their school, fired live rounds, rubber-coated steel bullets, gas bombs and concussion grenades, causing dozens to suffer the effects of teargas inhalation, in addition to attacking many students and teachers.

The Israeli army also frequently closes the main entrance of the village with iron gates, which were again closed three days ago, and were never reopened, forcing the villagers to use one road that passes near Halamish illegal colony, built on private Palestinian lands.