Israeli authorities continued to enforce a strict crackdown on the Issawiya neighborhood, in the central occupied West Bank city of Jerusalem, for the fifth consecutive day, on Tuesday, with Palestinians saying they have been subjected to “collective punishment” through road closures, arbitrary searches, and mass detentions.

Abu al-Hummus added that Israeli forces set up the checkpoints since predawn hours and conducted extensive searches of Palestinian-owned vehicles and buses.

Palestinian areas in occupied East Jerusalem have seen an influx of Israeli settlers at the cost of home demolitions, the eviction of Palestinian families, as well as a heightened presence of Israeli forces and discriminatory policing.

Issawiya is commonly subjected to police raids and restrictions on freedom of movement for local Palestinians in the form of roadblocks and arbitrary searches. Due to the aggressive nature of the raids, local youth sometimes throw rocks or Molotov cocktails at police.
Soldiers Attack, Injure, A Palestinian Worker In Hebron 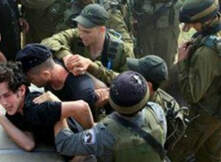 Israeli soldiers attacked, Tuesday, a Palestinian day laborer while working in Jaber neighborhood, in Hebron city, in the southern part of the occupied West Bank.

Media sources said the soldiers stopped and detained the worker, identified as Ishaq Ezzat Jaber, in his forties, while carrying construction supplies to a work site.

They added that the Palestinian suffered various cuts and bruises and was still detained by the soldiers at the time of this report.
Palestinian prisoners' hunger strike over as deal reached with Israel

he Palestinian prisoners in Israeli jails on Monday evening announced the end of their hunger strike after an agreement has been reached with the Israel Prison Service.

The Palestinian Prisoners Movement said in a detailed statement that an agreement in principle has been reached between the prisoners and the Israel Prison Service regarding their demands.

According to the statement, life in all prison sections will return to what it was before 16 February, which means before the installation of the cancer-causing cellphone jammers and the punitive measures that followed.

The Israel Prison Service also agreed to install public phones in prisoners' cellblocks and allow them to make supervised calls to relatives.

The statement noted that the agreement included a number of demands regarding the detention conditions of prisoners, especially those held in solitary confinement.

The Palestinian Prisoners Movement hailed the Palestinian people for their support over the past few days, and stressed that their battle for freedom is not over yet.
Minors among 12 Palestinians detained by Israeli forces

Israeli forces detained at least 12 Palestinians, including minors, across the occupied West Bank, on predawn Tuesday.

In the central West Bank district of Ramallah, another three Palestinians were detained. They were identified as Ragheb Muhammad al-Tamimi, Halal Mamdouh Atta, and Suleiman Salem Qatsh.

In the northern West Bank district of Nablus, one Palestinian was detained. He was identified as Adel Sabah.

In the northern West Bank district of Salfit, another Palestinian was detained and identified as Muhammad Eid Dahdoul.

According to prisoners rights group Addameer, there are 5,450 Palestinian prisoners being held in Israeli prisons, including 205 minors, 32 of whom under 16 years old.
15 apr 2019
PPS: “Israeli Soldiers Abduct Ten Palestinians In West Bank”

Israeli soldiers abducted, on Monday at dawn, ten Palestinians from their homes, in several parts of the occupied West Bank, after the army invaded and ransacked dozens of homes, and interrogated many Palestinians while inspecting their ID cards, the Palestinian Prisoners’ Society (PPS) has confirmed.

The PPS said the soldiers abducted Mo’men Fathi Qar’awi, 24, from his home in Nur Shams refugee camp, east of the northern West Bank city of Tulkarem.

It added that the soldiers also abducted Shadi Bassam Abu Shareb, 30, and Taher Nofal, 20, from their homes in Qalqilia, in northern West Bank.

The soldiers also installed many roadblocks in several parts of the occupied West Bank, especially in and around Hebron, in the southern part, before stopping and searching dozens of cars, and interrogated many Palestinians while inspecting their ID cards.
Palestinian prisoner enters 18th year in Israeli prisons

Palestinian prisoner Shadi Moussa, from the Mirka village in the northern occupied West Bank district of Jenin, entered his 18th year in Israeli prisons on Monday.

Moussa was injured in the head and detained by Israeli forces after being chased on April 15th 2002.

Israeli courts then sentenced Moussa to 25 years of prison.

Following his injury in 2002, Moussa had a skull transplant; he is currently held at the Negev jail in southern Israel.
Israeli forces detain Palestinian after crossing Gaza fence

Israeli forces detained a Palestinian, on Sunday afternoon, after he crossed the Israeli security fence in the northern besieged Gaza Strip.

Hebrew-language news sites reported that the detained man a knife in his possession.

Sources added that three Palestinians had crossed the fence into Israel; however, Israeli forces were able to detain one of them while the others returned to the Gaza Strip.

The detainee was transferred to the Israeli intelligence for interrogation.

Israeli forces regularly detain Palestinians attempting to cross into Israel from the Gaza Strip, which has suffered under a nearly 12-year-long military blockade by Israel.
Army Abducts Six Palestinians In Jenin, Qalqilia And Tulkarem

Israeli soldiers abducted, on Monday at dawn, six Palestinians in Jenin, Qalqilia and Tulkarem, in the northern part of the occupied West Bank, the Palestinian Prisoners Society (PPS) has reported.

It added that the soldiers also abducted a former political prisoner, identified as Mahdi Nour Amarna, from Ya’bad town, west of Jenin.

Palestinian medical sources report that a Palestinian child, Issac Abdul Muti Suwailm Eshteiwi, 16, from Rafah, in the south of the Gaza Strip, died of injuries sustained when he was shot by Israeli forces east of Rafah near the border fence on April 3rd.

After he was shot, the injured boy was grabbed by Israeli soldiers who thrust him into a military vehicle and took him to a military base in Israel.

The Israeli military claimed that Issac and two other children were attempting to escape over the border fence when they were shot.

When the incident occurred, one of the teens suffered fatal injuries when he was shot.

The Israeli military reported that Issac suffered “mild injuries” after he was shot at close range by their sharpshooters, and the third boy was taken onto custody without reported injury.

But he has remained in Israeli custody since being shot, and his family has not been allowed to see him, according to local sources.

His parents were informed on Sunday that Issac had succumbed to his injuries. It is unknown whether further injuries had been inflicted upon him while in Israeli military custody due to “harsh interrogation”/torture.

On the same day that Issac was killed, a 14-year old Palestinian boy was found, after his family had reported him missing for three days, in an Israeli prison.

Ramez Tamimi, 14, was kidnapped by Israeli soldiers from his village, Dir Nitham, north of the central West Bank city of Ramallah, and was eventually found in ‘Ofer’ prison, and his family was never informed.
14 apr 2019
Israeli Soldiers Abduct Fifteen Palestinians In West Bank

Israeli soldiers abducted, on Sunday at dawn, at least fifteen Palestinians, including the governor of occupied East Jerusalem, after storming their homes and ransacking them, in several parts of the West Bank.

It is worth mentioning that, after abducting the governor several times since October of 2018, the Israeli army issued orders barring him from entering the West Bank for six months.

In Hebron, in southern West Bank, the soldiers also invaded and searched homes and abducted four Palestinians, identified as Amin Khalil as-Sous and Hayel Ishaq Rajoub, from Doura town, south of Hebron, in addition to Zeineddin Nafeth Jaradat and Hamada Hasan Jaradat, both fifteen years of age, from Sa’ir town, east of the city.

According to local sources, the Israeli police in Jerusalem kidnapped two young men identified as Yazan Obeid and Abd Owaiwi from their homes in al-Issawiya district.

In Bethlehem, a young man identified as Mustafa Hijazi was taken prisoner by Israeli soldiers at the Container checkpoint.

Israeli forces detained two Palestinians, on Saturday, as they passed through an Israeli military checkpoint in Tel Rumeida, in Hebron City, in the southern occupied West Bank.

Local sources said that Israeli forces detained two Palestinians, who were identified as Sari and Yousef al-Aqel, residents from Beit Ula village in the Hebron district.

The reason for the detention remained unknown.

Tel Rumeida is located within the area of the city designated as H2, an area taking over the bulk of Hebron's Old City that is under full Israeli military control, and the site of five illegal Israeli settlements which continually expand into surrounding Palestinian neighborhoods.

The Israeli-controlled H2 area is home to 30,000 Palestinians and around 800 Israeli settlers who live under the protection of Israeli forces.
Israeli forces deliver summon notices to 3 Palestinians

According to local sources, Israeli forces raided the town and broke into several homes, as well as conducted searches.

Sources said the purpose of the raid was to deliver summon notices to three Palestinians, who were identified as Mazen Hussein al-Tit, Muayed Hassan al-Tit, and Saqer Ibrahim Sabarneh.

The summon notices informed them to come into an Israeli interrogation center, however, the reason for the notices remained unknown.

Israeli raids into Palestinian towns and villages are near daily occurrence in the West Bank and East Jerusalem.
Mass hunger striker in Israeli jails continues for sixth day running

Scores of Palestinian prisoners in Israeli jails have entered day 6 of the open-ended hunger strike, which was dubbed “al-Karama (dignity) 2,” amid Israeli attempts to make them end their strike.

Other prisoners are expected to participate in the hunger strike in the coming days, especially on April 17.

Leaders of the prisoners last Monday announced the failure of their talks with Israeli jailers after their demands were rejected, especially with regard to using phones.

The hunger strikers have several demands. One of them is to allow the prisoners to regularly communicate with their families through providing their jails with telephone services, which are available in prisons where Israeli criminals and killers are held.

The hunger strikers also demand the Israeli prison service to remove the cancer-causing cellphone jammers inside jails and to allow all prisoners, including those from Hamas in Gaza, to receive visits from their families.

Another demand call for revoking all the new and old punitive measures against the Palestinian prisoners and improving the incarceration conditions of Palestinian women and children detained in Israeli jails.