The Israeli prosecution on Wednesday filed indictments against 43 Jerusalemites accusing them of throwing stones and Molotov cocktails against Israeli police forces in the wake of the 14th July shooting attack at al-Aqsa Mosque.

According to the Israeli police, two arrest campaigns were launched in several towns and villages in Jerusalem in which 72 Jerusalemites suspected of committing "acts of disorder" were arrested.

The police claimed that these acts caused damage to public property and led to the injury of a number of police officers.

The police said that indictments were served against 43 Jerusalemites out of 72, adding that the detention of all 72 detainees will be extended until the completion of the legal proceedings taken against them.
Soldiers Abduct Three Palestinians In Tulkarem, One In Jerusalem

The Tulkarem office of the Palestinian Prisoners’ Society (PPS) has reported that the soldiers invaded Shweika area, and Deir al-Ghsoun town, north of Tulkarem, and abducted three Palestinians.

The PPS stated that the soldiers abducted Rami Eqab Jabr, and his brother Abdul-Rahman, from their homes in Shweika area.

It added that the soldiers also abducted al-Mohtadi-Billah Abu Zeitoun, 25, while he was heading to his orchard, isolated behind the Annexation Wall, near Deir al-Ghsoun village.

In addition, undercover soldiers of the Israeli army abducted Daoud Houshiyya, after ambushing him in Shu’fat refugee camp, in Jerusalem.

Eyewitnesses said the undercover soldiers drove a car with Palestinian license plates for Anata nearby town, before ambushing and abducting Houshiyya, who has been wanted by the army.

They added that the undercover officers were masked and concealing pistols, which they later pointed at the man, and many Palestinians, before abducting him.

Directly after abducting the Palestinian, a large military forced invaded the area, and fired many live rounds, gas bombs and concussion grenades, to secure the retreat of the undercover officers.
Army Abducts Nine Palestinians In Jerusalem, Jenin And Hebron 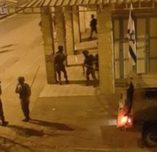 Israeli soldiers abducted, on Wednesday at dawn, four Palestinians in Abu Dis town, and one in at-Tour, in occupied East Jerusalem, in addition to abducting another Palestinian near Jenin, in the northern part of the West Bank, and three in Hebron, in southern West Bank.

The invasion and abductions led to clashes between the soldiers and many local youngsters, who hurled stones and empty bottles on the military vehicles, while the army fired concussion grenades and gas bombs.

In addition, the soldiers abducted a child, identified as ‘Ala Abu Jom’a, 15, in at-Tour neighborhood, overlooking Jerusalem’s Old City.

In Jenin, the soldiers abducted Haitham Fayeq Yousef, 22, after stopping him at a roadblock, near Shavei Shomron illegal colony, while he was heading back home in Be’er al-Basha village, south of Jenin.

Israeli soldiers abducted, on Tuesday at night, a young Palestinian man in Hebron city, in the southern part of the occupied West Bank, and caused many Palestinians to suffer the severe effects of teargas inhalation near Ramallah, in central West Bank.

The Hebron office of the Palestinian Prisoners’ Society (PPS) said the soldiers abducted Mohammad Kayed Edrees, from the Old City, and took him to an unknown destination.

It added that the soldiers alleged finding a knife with the Palestinian, after stopping and searching him. The young man was apparently carrying a pocket knife, and did not attempt to attack the soldiers.

Palestinian citizen Daoud Houshiya was kidnapped by an Israeli undercover troop in an ambush set up in Shu’fat camp after he had been chased down for six months.

The captive was onboard a car, along with three other young man, before he was kidnapped and dragged to an unidentified destination.
Israeli court extends detention of Sheikh Salah

An Israeli court extended on Tuesday the detention of Sheikh Raed Salah, the head of the northern branch of the Islamic movement, until Thursday.

However, the court rejected the police’s allegations that Salah had incited violence in his eulogy at the funeral of the three Palestinians whose anti-occupation attack had killed two Border Police officers.

Rishon Letzion Magistrate’s Court Judge Menahem Mizrahi responded to the police that Salah’s pronouncements at the funeral were citations from the holy Quran. “I find a similarity to the funeral ceremony from another religion, but it does not count as incitement,” he said in his ruling.

Sheikh Salah said that his arrest was part of the Israeli targeting of Palestinian leaders in the 1948 occupied Palestinian territories.

Salah told reporters, before the court session was held in order to consider the extension of his detention, that his arrest aims at keeping the media busy with the issue of his arrest rather than with the charges brought against Israeli Prime Minister Benjamin Netanyahu.
Israeli Special Forces arrest Palestinian youth in Shufat refugee camp

The PIC reporter said that the detainee was identified as Daoud Huwasheh from Shufat refugee camp in the city.
Hamas: Arresting Salah, attempt to impose new intimidation policy

The spokesman of Hamas Movement Husam Badran said that arresting Sheikh Raed Salah, Head of the Islamic Movement in 1948 Occupied Palestine, by Israeli police reflects the Israeli apartheid system and its targeting of Palestinian national and Islamic figures in the Green Line.

In a press statement on Tuesday, Badran stressed that rounding up Sheikh Salah by Israeli police and Special Forces was an attempt to enforce a new intimidation policy against Palestinians in 1948 Occupied Palestine.

“The charges brought against Sheikh Salah are null and void and aim at preventing any activity or move that would expose Israeli apartheid policies”, Badran said.

The Hamas leader opined that arresting Salah was a pre-planned move since it has followed an incitement campaign against the Islamic Movement leader by the Israeli government.

Badran warned of new Israeli plans aimed at targeting Occupied Jerusalem and al-Aqsa Mosque especially after the renewal of the ban of entry order against Sheikh Kamal al-Khatib, deputy head of the Islamic Movement in the 1948 occupied Palestine, that banned him from accessing al-Aqsa Mosque in Occupied Jerusalem for three months.
Indictment to be served against 5 of Halamish attacker's family

Israeli intelligence on Tuesday accused five of the family of Halamish attacker, prisoner Omar al-Abed, of having a prior knowledge of their son's intention to carry out the attack without taking any action to stop him.

Israeli police said in a statement on Tuesday that interrogation is still ongoing with five members of Abed's family, namely his parents, two brothers and his uncle.

The police claimed that preliminary investigations showed that Abed's family were aware of his intention to carry out the attack but did nothing to prevent him and even did not inform the Israeli and Palestinian authorities.

According to the statement, the investigation file will be delivered to the military prosecution at Ofer court in preparation for filing an indictment against the five defendants.

According to the Palestinian Prisoners Society, Yamaz troops of the Israeli prison service stormed Section 2 in Ramon prison and dragged all inmates to Section 1.

The Committee of Prisoners and Ex-Prisoners also said Palestinian prisoners in Nafha jail spoke out against over-crowdedness in Section 3 and the spread of insects and rodents.

Lawyer Youssef Nasasra quoted prisoner Alaa Ghneim as stating that 10 detainees are being crammed into one cell, filled with cockroaches and mice.

He added that 53-year-old detainee Mahmoud Kharbish, held in Israeli lock-ups for 30 years, has been left without treatment for the diseases he has been diagnosed with, including cardiovascular disorders, hypertension, high cholesterol, and spine disorders.

The lawyer quoted Kharbish as stating that the Israeli prison authorities prevented him from seeing his wife, daughter, brothers, and sisters for years under the security pretext.

Some 6,400 Palestinian prisoners, among them 62 women, 10 minor girls, 300 children, 12 MPs, and 450 administrative detainees, are incarcerated in Israeli penitentiaries across the occupied Palestinian territories.
11 Palestinians detained in fresh raids

According to Israeli army, four arrests were carried out in al-Khalil, while a Palestinian was detained in Nablus.

Five other arrests were reported in Ramallah while a young man and his father were rounded up in Qalqilia.

Another young man, from Qalqilia, was detained at a military checkpoint near Salfit.

The sources affirmed that four locals were also detained during the raid.

Similar raids were carried out in Tulkarem where a number of workshops with no arrests were reported.

Soldiers Abduct Six Palestinians In Hebron, One In Jerusalem, Break Into shops, Warehouses, In Tulkarem

Israeli soldiers invaded, on Tuesday at dawn, several homes in occupied East Jerusalem, and Hebron in the southern part of the West Bank, violently searched them and abducted six Palestinians in Hebron and one in Jerusalem. The army also broke into shops and warehouses in Tulkarem, in northern West Bank.

The Hebron office of the Palestinian Prisoners’ Society (PPS) said the soldiers abducted Abdul-Halim Ibrahim Qfeisha, 16, and Saleh Raed Abu Markhiyya, from their homes in Hebron city, and another young man, identified as Ala’ Mohammad Ziyadat, from Bani Neim town, east of Hebron.

In related news, the soldiers abducted Amjad Hani Shweiki, 19, after invading his home in Silwan town, south of the Al-Aqsa Mosque, in Jerusalem.
The young man was cuffed and blindfolded, before the soldiers took him to an interrogation center in the city.

In Tulkarem, the soldiers invaded many shops and blacksmith workshops, in various neighborhoods in the city.

The invasions simultaneously took place in al-Haddadin road, north of Tulkarem, and Nablus Street. The soldiers broke the locks of the shops’ doors, and violently searched them, causing excessive damage.

The owners said the invasion has no legal foundation, and that the soldiers did not even present any justifications, and added that the sole purpose of these violations is to cause destruction.
Page:  7 - 6 - 5 - 4 - 3 - 2 - 1
Powered by