Israeli Occupation Forces (IOF) rounded up a 17-year-old Palestinian boy on Saturday evening from his home in Kafr Qaddum town to the east of the West Bank city of Qalqilya.

A local source said that the detained minor was identified as Ibrahim Jumaa.

He was taken to an unknown destination after storming and wreaking havoc in his family home.
Sick prisoner Aridi enters his 19th year in Israeli jails

The Palestinian Prisoners Center for Studies said that the sick prisoner Sami Aridi, 37, who is from 'Arraba town to the south of Jenin, entered on Saturday his 19th year in Israeli jails.

The Center explained that Aridi, who was arrested in 1999 and who is serving a 19-year sentence in Israeli jails, has been facing a difficult health condition for more than 13 years now without receiving proper treatment.

Several years ago, Aridi started to suffer from cardiac problems, breathing difficulties, and chronic headaches, the center pointed out.

Aridi's brother affirmed that Sami's health is rapidly deteriorating and that he needs special medical care that is not available in Israeli jails.

He called on human rights institutions to work on releasing his brother so that he can receive the necessary treatment, especially that he has only one year left of his sentence.
Five prisoners isolated in Megiddo jail suffer harsh conditions

According to Asra Media Office, those prisoners are maltreated and deprived of their basic rights, including the health care.

In accordance with Israel’s punishment policy against the prisoners in isolation cells and the instructions of the Shin Bet, the administration of Megiddo prison uses a package of punitive measures against them to make their lives in detention unbearable.

One of those prisoners, Husam Omar, has been in solitary confinement for over four years, during which mock courts extended his detention every six months.

The Megiddo jailers are also keen on changing the location of his isolation repeatedly and medically neglecting him as part of the punitive measures pursued against him.

Omar suffers from inhumane conditions in isolation cells, which are known for being a fertile ground for diseases. As a result, his health has deteriorated considerably.

Another prisoner, Ahmed al-Maghrebi, 43, has been in isolation cells for several years in Megiddo jail. He is serving 18 life sentences.

His current isolation started about two years ago. He already spent nine years in solitary confinement before jailers decided to end his isolation along with others following a deal with hunger strikers in 2012.

Like other isolated prisoners, he is also being held under difficult conditions and medically neglected.

A third prisoner from Gaza called Mu’ayyad al-Halawli is serving 16 years in prison. He suffers from psychological problems, but jailers extended his isolation detention three times with no consideration for his medical status. He has been in solitary confinement for over a year.

Two other prisoners, Ramez al-Hajj and Mohamed Nassar, have also been in isolation for different periods of time.

Al-Hajja, who takes medication for neurological disorders and cannot speak normally, is serving 21 years in jail and has been in isolation for about three years. He spends most of his time asleep because of the sedatives he takes every day.

Nassar, in turn, has been in isolation cells since he beat an Israeli prison officer during jailers’ assault on prisoners in the Negev jail six months ago. He also suffered injuries and bruises at the time.

As part of the isolation measures taken against them, those five prisoners are also prevented from spending some time outside their cells and seeing their families, and being locked up inside miserable cells, which are unventilated and infested with insects and rats.
Army Injured Three Palestinians, Abducts Three In Jenin

Media sources in Jenin said dozens of soldiers invaded Jenin refugee camp, and clashed with many youngsters, who hurled stones and empty bottles on the military jeeps.

The army also detonated doors of several homes, before invading and violently searching them.

Owners o two of the invaded homes have been identified as Akram Abu al-Haija and Mohammad Abu al-Haija, while the soldiers also summoned Amin and Baha’, the two sons of Akram, for interrogation in Salem base, west of Jenin.

In addition, the soldiers invaded Beit Fajjar town and Marah Rabah village, south of Bethlehem, and summoned several young men for interrogation in Etzion military base and security center, north of Bethlehem.

It added that the soldiers also invaded and ransacked the home of Ahmad Ayed Deeriyya, who was forced out of the West Bank, and into the Gaza Strip, several years ago.

Furthermore, the soldiers invaded Marah Rabah village, and broke into the home of Mahmoud Mohammad Sheikh, before summoning him for interrogation in Etzion.
Israeli Soldiers Abduct Two Palestinian Teenagers In Qalqilia

Israeli soldiers abducted, on Friday evening, two Palestinian teenagers at the northern entrance of Qalqilia, in the northern part of the occupied West Bank.

Media sources in Qalqilia said the soldiers clashed with many Palestinian youngsters, who hurled stones and empty bottles at army jeeps invading the northern entrance area.

The sources added that the soldiers abducted Ahmad Adel Hasan, 18, and Laith Ahmad Nofal, 16, and took them to an unknown destination.
18 aug 2017
Hamas MPs reach out to jailed MP Jarrar over death of her father

Hamas MPs in the occupied West Bank extended condolences to the Palestinian MP Khalida Jarrar over the death of her father on Thursday.

Hamas MPs expressed their deepest sympathy with Jarrar, expressing wishes that she would be freed from Israeli jails soon.

In July, the Israeli occupation authorities sentenced the Palestinian MP Jarrar, aged 53, to six months in administrative detention, with neither charge nor trial.
Israeli Soldiers Abduct Three Palestinians In Jerusalem, Bethlehem And Ramallah

Israeli soldiers abducted, on Thursday at night and Friday at dawn, four Palestinians from Bethlehem, Ramallah and Jerusalem, in the occupied West Bank, and assaulted the mother and child brother of one of the abducted Palestinians.

The Bethlehem office of the Palestinian Prisoners’ Society (PPS) said the soldiers invaded al-Atan Street, in the city, and abducted Majed Mousa Jaber, 33, after breaking into his home and searching it.

Furthermore, the soldiers invaded Silwan town, south of the Al-Aqsa Mosque in occupied Jerusalem, and abducted Mansour al-‘Abbasi, 17, after storming his home and searching it.

On Thursday at night, the soldiers abducted a young Palestinian man near Shu’fat refugee camp, in Jerusalem, after the soldiers searched him and claimed that he carried a knife “with the intent to carry out a stabbing attack.”

In Ramallah, the soldiers invaded Um ash-Sharayet area, and invaded a shop before repeatedly assaulting a young man with clubs and batons, and dragged him outside before abducting him.
PPS: Israeli courts issue jail terms and fines against five prisoners

The Palestinian Prisoner Society (PPS) said Thursday that the Israeli military courts of Salem and Ofer issued actual prison sentences against five Palestinian prisoners and imposed financial penalties on them.

According to a statement released by the PPS, prisoner Mo'men Makhlouf was sentenced to 34 months in jail and ordered to pay 4,000 shekels, while prisoner Mohamed Khaddour received eight months’ imprisonment and was fined 3,000 shekels.

Different jail rulings and fines were also handed down to other three prisoners.  Nabil Sawalhi and Mohamed Araysha were both ordered to serve 14 months in jail and pay 4,000 and 2,000 shekels in fines respectively.

Seven months’ imprisonment and a fine of 2,000 shekels were also issued against prisoner Hamza Namruti.

In another development, the PPS said that 12 detainees received administrative detention orders, between three to six months, from the Ofer military court, with no indictment or trial.
17 aug 2017
PPS: “Israeli Soldiers Abduct Eighteen Palestinians In The West Bank” 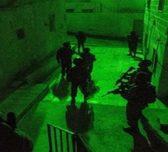 The Palestinian Prisoners Society (PPS) has reported that Israeli soldiers have abducted, overnight and during the day Thursday, eighteen Palestinians from different parts of the occupied West Bank, during extensive and violent military searches of homes.

The Israeli occupation state’s crimes and suppressive practices against the Palestinian people have never been stopped since the Nakba (catastrophe) in 1948.

In a new scene on Thursday evening, a group of Israeli soldiers severely beat a Palestinian child, believed to be 12 years old, in Umm ash-Sharayet neighborhood of Ramallah city.

A video published by the Palestinian Information Center (PIC) on its Facebook page showed the child being physically assaulted and bundled into a military vehicle.

There is still no information about the identity of the child and where he was taken to.
Arrests reported during clashes in Occupied Jerusalem

Clashes erupted on Thursday evening between Palestinian youths and Israeli forces in Silwan town in Occupied Jerusalem. The forces arrested a young man and a girl and detained two other youths in the city.

Eyewitnesses said that Israeli forces fired stun grenades in Ain al-Lawza neighborhood in Silwan town during clashes in the area.

A Jerusalemite youth was arrested at the barrier of Shufat refugee camp northeast of Occupied Jerusalem at the pretext of alleged knife possession, according to eyewitnesses.

A young girl, from Tamra city in 1948 Occupied Palestine, was also rounded up at Bab al-Amoud gate in the occupied city.

Two other young men were detained for a while and searched at the vicinity of Bab al-Amoud gate in the Old City of Occupied Jerusalem.
IOF detains 13 Palestinians in predawn raids across the West Bank

The Israeli Occupation Forces (IOF) detained at least 13 Palestinians during overnight raids across the West Bank between and occupied Jerusalem, Israeli and Palestinian sources revealed.

An Israeli army spokesperson confirmed the arrest of 12 Palestinians including nine “wanted persons” for being allegedly involved in anti-occupation attacks.

Two activists in Hamas Movement were among the reported arrests, according to the sources.

Two youths were detained in Bethlehem, while three others were rounded up in Tulkarem. Another young man was also arrested in Nablus.

During the raids, a large amount of money was confiscated in Surif town, north of al-Khalil.

Violent raids were also reported in Balata refugee camp where an ex-prisoner was detained after IOF soldiers broke into his family house amid heavy firing of live ammunition. The detainee was shot and injured during his arrest.

Also in Nablus, a young man was arrested after IOF stopped his car at Hawara checkpoint.

Meanwhile, clashes broke out in Qalqilia when IOF soldiers stormed and violently searched a number of local houses amid heavy firing of teargas bombs.

Several locals were interrogated during the raid, eyewitnesses told the PIC reporter.

Israeli raids in Palestinian towns, villages, and refugee camps are a daily occurrence in the West Bank and occupied Jerusalem, with a biweekly average of 85 search and detention raids carried thus far in 2017, according to UN documentation.
Army Abducts Six Palestinians In Jerusalem, Ramallah And Bethlehem

Israeli soldiers invaded, on Thursday at dawn, the town of Silwan, in occupied East Jerusalem, Beiteen and Beit Rima villages, in Ramallah, in addition to Beit Sahour city, in Bethlehem governorate, and abducted six Palestinians.

It is worth mentioning that clashes took place, last night, in Ein al-Louza neighborhood, in Silwan, after the soldiers invaded it.

In Ramallah governorate, in central West Bank, the soldiers invaded and searched homes in Beiteen village, east of the city, and abducted Abdul-Aziz al-Yassini, Abed al-Yassini and Hamada al-Yassini.

The soldiers also invaded Beit Rima village, northwest of Ramallah, and abducted a young man, identified as Fadi ad-Deek, from a local home.

Media sources in Ramallah said Fadi is from Kafr ad-Deek village, in Salfit governorate, in the northeastern part of the West Bank.

The soldiers also clashed with many local youngsters, and fired many live rounds.

It is worth mentioning that the soldiers attempted to abduct Fadi, in a previous invasion into Beit Rima, but he managed to escape.

in  related news, the soldiers invaded Deir Abu Mashal village, in Ramallah, and detonated the family home of Adel Ankoush, who was killed along two other Palestinians, on June 16th 2017, after attacking Police officers with knives and guns, killing a border policewoman, identified as Hadas Malka, 23.
Page:  8 - 7 - 6 - 5 - 4 - 3 - 2 - 1
Powered by