Israeli soldiers abducted, Saturday, several Palestinians near Ramallah, in central West Bank, as the military continues to search for the Palestinians who killed an Israeli teenage girl, 17, Friday, but could not confirm any relation between the detained Palestinians and the soldier.

The military said its forces, along with the Police and Internal Security agents, are ongoing with the search campaign in Ramallah, to detain any person responsible for the roadside bombs that killed Rena Shnerb, 17, and the injury of her father and brother.

It added that all abducted Palestinians have been moved to a few interrogation facilities, to be questioned by the Internal Security Services, and added that it could not confirm any connection between them and the death of the soldier.

In addition, the army said that Brigadier General Eran Niv, the commander of the military in the West Bank, held a session with senior Israeli security and military leaders to evaluate the situation and developments.
Israeli forces arrest Palestinian girl at West Bank checkpoint

The Israeli occupation forces on Saturday evening arrested a Palestinian girl at Za'tara checkpoint in the West Bank.

Local sources said that the Israeli forces arrested the girl while she was passing through Za'tara checkpoint and transferred her to a detention center for interrogation.

The Israeli occupation authorities are holding 36 Palestinian women and girls in their jails, three of whom suffer from different injuries and need regular treatment.
Israeli Troops Abduct Four, Summon One, in Pre-Dawn Raids

Israeli troops invaded several parts of the West Bank on Saturday before dawn and abducted several Palestinians who were asleep in their beds.

In the central West Bank, Israeli forces abducted on Saturday at dawn two young men from Ein Arik village and a third from Ein Qiniya village west of Ramallah.

According to the Palestinian Wafa News Agency, the Israeli forces abducted Ribhi Abu al-Safa, and Mohammad Nayef Abu al-Safa, from the village of Ein Arik after raiding their homes and ransacking their property.

Another Palestinian, a student at Birzeit University and former political prisoner, was abducted from his house in Ein Qinya village, northwest of Ramallah.

It is noteworthy that the Israeli military maintained a closure of all roads west of Ramallah through Friday night, following the death of an Israeli settler and the wounding of two others from an improved explosive device near Deir Bzeih.

The Israeli army detained early this morning three Palestinian youths from villages near Ramallah and seized street surveillance cameras in these villages, according to local sources.

They said soldiers raided homes in the village of Ein Arik, near Ramallah, and detained two youths after raiding and ransacking their homes.

Soldiers also detained a third youth, a student at Birzeit University and a former prisoner from the village of Ein Qinya, also near Ramallah, after raiding his family home.

The sources said the soldiers seized tapes from the street surveillance cameras installed by shop and homeowners in these villages.

The arrests and seizure of the cameras are believed related to the Israeli army investigation into the explosion from yesterday near the village of Ein Arik that killed one Israeli settler and injured two others.
23 aug 2019
Prisoner Murad Abu Muailiq pushed closer to death
anything for their son whom they have not seen for eight years due to a visit ban imposed by the Israeli Prison Service.

Murad's story started when Israeli occupation forces arrested him on the Gaza Strip border 20 years ago. They first shot him with explosive bullets in the knees causing severe damage in both his knees that exacerbated into mobility impairment. Shortly after that a dangerous illness plagued his intestines.

Murad's father said that his son's health has seriously deteriorated in the past few weeks, adding that his son remained in bed like a cancer patient counting his last days.

"Israel has advanced medical equipment but it is depriving my son of treatment. His treatment won't cost 1,000 NIS. He has undergone many surgeries, but they intentionally left the infected part of his intestines in his body, and he has been bleeding for four years," he said.

The Israel Prison Service is preventing Murad Abu Muailiq's family from visiting him or intervening to save his life. All efforts made by human rights organizations in the recent years to pressure Israel to complete his treatment have failed.

In 2007 Murad, after many appeals, underwent a surgery to remove the infected parts of his intestines, but his suffering increased after the operation as Israeli doctors deliberately left a rotten part inside his body.

Murad usually receives treatment once every two months. A few days ago his condition worsened but the Israel Prison Service denied him much-needed medical intervention and he fell into a coma.

Murad's grieving mother said, "We are so worried about his life. I haven't seen him for seven years. I'm afraid I will lose Murad."

She called on the Palestinian Authority and Palestinian resistance factions to act immediately and liberate her son from Israeli prison.
22 aug 2019
Israeli forces attack pro-prisoners protest at Ofer military camp; detain one

According to the Palestinian Prisoner Society, eight Palestinians held in administrative detention are currently on hunger strike, the longest is Huthayfa Halabieh, 28, from Abu Dis, east of Jerusalem, who has been on strike for 53 days, followed by Ahmad Ghannam, 42, from Dura in the Hebron district, who has been on strike for 40 days, Sultan Khlouf, 38, from Burqin in Jenin district, 36 days, Ismail Ali, 30, from Abu Dis, 30 days, Wajdi Awawdeh, 20, from Dura, 25 days, Tareq Qadan, 46, from Jenin, 23 days, Nasser al-Jada, 30, from Burqin, 16 days, and Thayer Hamdan, 21, from Beit Sira near Ramallah, 11 days.
Israeli police kidnaps seven Jerusalemites from Bab al-Rahma 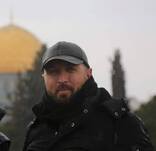 According to eyewitnesses, police forces stormed the Bab al-Rahma area and rounded up Aqsa guard Bader al-Rajbi along with three children, two girls and one young man.

The girls were identified as Shifa Abu Ghaliya and Medellin Issa and the young man as Habib Abu Shusha.

The police forces barred other Palestinian citizens from taking pictures as they were carrying out the arrests.

A few days ago, the police kidnaped an Aqsa guard called Amer al-Salfiti before an Israeli court extended his detention for seven days because he took photos of police officers as they were stealing furniture from the Bab al-Rahma prayer area. video

Israeli police detained today four Palestinians from inside Al-Aqsa Mosque compound in Jerusalem's Old City, including a guard and two women, according to local officials. video

They said police detained Badr Rajabi, whose work is to keep order at Bab al-Rahma prayer area in the Mosque compound, two women identified as Madeline Issa and Shafa Abu Ghalieh, as well as a young man identified as Habib Abu Shousheh.

The four were detained at Bab al-Rahma prayer area, which Israel is trying to restrict Palestinian and Muslim presence at by keeping it closed for Muslim worship and where Jewish fanatics usually gather during the morning visitation hours of the Muslim holy place.

Palestinians and Muslims in general fear Israel is trying to change the status quo at Al-Aqsa Mosque as a purely Muslim worship area and gradually allow Jewish prayer at parts of it, starting with Bab al-Rahma, and the closed gate of the walled compound.

Jewish fundamentalist and fanatic groups seek to eventually destroy Al-Aqsa Mosque and the Dome of the Rock, the main features of the Muslim holy compound and third holiest site in Islam, in order to build a Jewish temple on their ruins, a step Muslims warn can inflame a religious strife in the entire region.
14 Palestinians kidnaped by IOF in W. Bank and J’lem

The Israeli occupation forces (IOF) last night and at dawn Thursday kidnaped at least 14 Palestinian citizens in the West Bank and Jerualem.

According to local sources, the IOF kidnaped one from Silwad town in Ramallah, four from Jenin and its refugee camp, and two others from al-Khalil and Beit Lid town in Tulkarem.

In Jerusalem, the IOF kidnaped three young men from Issawiya district. They were identified as Saleh Abu Asab, Ahmed Mustafa and Muaad Obeid.

Last night, the IOF kidnaped two young men identified as Mahmoud Atatera and Nour Amarneh, residents of Ya’bad town in Jenin, after they were stopped at a military checkpoint near Nablus.

Two others were also kidnaped by the IOF at a checkpoint in the east of Bethlehem city. They were identified as Jawad Kalbouna and Kamal al-Hifnawi.

In Ramallah district, two separate Israeli military raids were carried out in Sinjil and Silwad towns, northeast of Ramallah city, resulting in the detention of two Palestinians, one from each town with the one from Silwad is said to be 18-years of age.

In Hebron in the south of the West Bank, PPS said a Palestinian man was detained.

It said soldiers detained the 13-year-old girl from Qalqilia after she was stopped for inspection near a settlement and allegedly a knife was found in her possession.

Israeli also detained Hiba Ahmad Labadi, from Jenin district in the north of the West Bank, upon arrival at Karama/Allenby/King Hussein Bridge crossing coming from Jordan. No reason was given for her detention.

In addition, Israeli security detained four Palestinians from Shufat refugee camp in occupied Jerusalem, including a young woman who was not identified.

The Popular Front for the Liberation of Palestine (PFLP) has reported that dozens of its political prisoners, imprisoned by Israel in three detention facilities, have decided to hold a hunger strike for three days as in an initial measure in solidarity with detainee Hotheifa Halabiyya, who continues a hunger strike he started more than 52 days ago.

The PFLP stated that Hotheifa, who is one of its political leaders, is among many hunger striking detainees, held under arbitrary Administrative Detention orders, without charges or trial.

It added that dozens of Its detained members in the Ramon, Ofar, Nafha and the Negev Detention Camp, will hold a hunger strike for three days starting Thursday.

It is worth mentioning that most of the detainees will be holding the hunger strikes for the second time in solidarity with other detained comrades.

The PFLP started that the “battle of empty bowels and strong wills is ongoing until the detainees achieve their rights in the struggle against the illegal Administrative Detention policy, holding them captive without charges or trial.”

It called on the Palestinian people to organize massive solidarity activities to support the detainees, facing ongoing and escalating Israeli violations.
Page:  9 - 8 - 7 - 6 - 5 - 4 - 3 - 2 - 1
Powered by