The clashes broke out when Israeli police forces stormed the camp amid heavy firing of teargas bombs.

Injuries were reported among local youths during the clashes.

Similar confrontations also erupted near al-Quds University in Abu Dis town where teargas bombs and rubber bullets were fired by the Israeli police at the protesters.

Earlier Wednesday, a young man was arrested near Bab al-Amoud in occupied Jerusalem. He was then taken to an unknown detention center.
Balboul brothers to be released on Thursday

Muhammad and Mahmoud Balboul are set to be released back to their home in the occupied West Bank city of Bethlehem on Thursday. They had gone on hunger strike for 80 days in order to obtain their freedom of administrative detention in Israeli jails.

The Palestinian Committee of Prisoners’ Affairs affirmed Wednesday evening that the Balboul brothers are expected to be released tomorrow.

The Balboul brothers’ release is a national victory, the committee said, hailing their family for “sacrificing and giving so much to Palestine.”

Muhammad, 26, and Mahmoud, 23, were initially detained during an overnight raid on June 9, and were subsequently sentenced to six months of administrative detention, an Israeli policy of internment without charge or trial based on undisclosed evidence.

Muhammad and Mahmoud launched a hunger strike on July 7 and 5, respectively, going without food for nearly 80 days in protest of being held without charge or trial in Israeli prisons.

The Israel security agency (ISA), in cooperation with the Israeli army, claimed arresting a Palestinian cell that carried out several shooting attacks near Ofra settlement to the northeast of Ramallah.

The Hebrew website "0404" reported on Wednesday, quoting the ISA after it allowed the publication of information, that the cell consists of three underage Palestinians. It accused them of carrying out four shooting attacks in October and November using local weapons they made by themselves.

The ISA claimed arresting some relatives of the cell members who are accused of hiding the weapons used in the attacks, noting that the results of the investigation will be referred to the prosecution office to level charges against the cell members.
Palestinian prisoner Saeed al-Banna diagnosed with new cancerous tumor

The Palestinian prisoner Saeed al-Banna, 36, affirmed that his latest medical examinations showed a growth of new cancerous lumps in his bladder which require an urgent eradication surgery.

In a letter written by al-Banna and distributed by Mohjat Al Quds foundation on Thursday, al-Banna said that two years ago he was diagnosed with bladder cancer then he underwent a surgery to eradicate the tumor in November 2014. The Israeli doctors told him then that he had completely recovered before he was recently surprised that cancer reappeared.

Saeed al-Banna is a single young man from Tulkarem town to the north of the occupied West Bank who was detained by the Israeli occupation forces (IOF) on 3rd April 2003. He is now serving a life sentence in Eshel prison, accused of being a member in al-Quds Brigades and participating in resistance operations.
Health of 3 hunger strikers sees turn for worse in Israeli jail

The health conditions of three Palestinian hunger strikers in Israeli jails have seen a turn for the worse.

The prisoners and ex-prisoners’ committee raised alarm bells over the exacerbated health status of prisoners Shedid and Abu Fara, who have fallen in faints and lost their ability to speak.

The two detainees have been subjected to daily harassment at the Israeli Assaf Harofeh hospital and might die at any possible moment.

Al-Hamour has been subjected to pressure by the Israeli prison service to end his hunger strike, which he started 17 days earlier.

Al-Hamour voiced his firm rebuff to succumb to pressure by IPS, vowing to continue his strike until the Israeli occupation authorities end his administrative detention.

A native of Jaba’ town, in Jenin, prisoner al-Hamour was arrested on February 16, 2016 and sentenced twice to six-month administrative prison-terms.
Israeli occupation sends 19 Palestinians to prison without trial

The Israeli occupation authorities (IOA) sentenced 19 Palestinian detainees to administrative prison terms, with neither charge nor trial, for periods ranging from three to six months.

Lawyer Mahmoud al-Halabi, from the Palestinian Prisoners Society (PPS), said the IOA issued administrative detentions against 19 Palestinian detainees, 12 among whom were sentenced to renewed administrative terms for the second and third times running for the period from December 1 to December 6.

The list of detainees included Ayoub Mohamed Khadour, from Ramallah, Mohamed Ahmed al-Najar, from al-Khalil, and Khaled Ahmad Abd Raboh, from Tulkarem, all of whom sentenced administratively to six months.
PPS: “Israeli Soldiers Abduct 16 Palestinians In The West Bank”

The Palestinian Prisoners Society (PPS) has reported that Israeli soldiers abducted, on Wednesday at dawn, 16 Palestinians, including a child, only 12 years of age, during home invasions and violent searches, in different parts of the occupied West Bank, including occupied East Jerusalem.

The PPS office in Bethlehem, said the soldiers invaded several communities in the district, searched homes, and abducted five Palestinians, including a child.

In Hebron, in the southern part of the West Bank, the soldiers abducted four Palestinians, identified as Sa’id Saqer Sha’rawi, 43, his son Ramadan, 23, Basel Eskafi, and Rajeh Abu ‘Ajamiyya, 45, who is also a former political prisoner.

In addition, the PPS in Ramallah said the soldiers also invaded and searched homes, and kidnapped two Palestinians, identified as Ahmad Hasan Khaseeb and Nidal Hindiyya.

In Qalqilia, in the northern part of the West Bank, the soldiers abducted Mohammad Ali Radwan, 24, and ‘Assem Omar Sweidan, 21.

In Salfit, the army abducted Ahmad Mohammad Bouziyya, 26, after invading his home and searching it.

In occupied Jerusalem, the soldiers abducted Odah Ahmad Khatib, 20, and Amin Hamed, during invasions of many homes in the city, and several surrounding communities.

On Tuesday at night, the soldiers abducted a child, identified as Ahmad Dandees, 14, from his home in Jerusalem.
6 dec 2016
IOF soldiers arrest two Palestinian schoolchildren in Nablus

The Israeli occupation forces (IOF) arrested on Tuesday two Palestinian children from al-Sawiyeh\ Lubban school in Nablus to the north of the West Bank.

Director of public relations in the Directorate of Education south of Nablus, Anwar Dawabsheh, said that an Israeli patrol arrested Aref Tabl and Ibraheem Deek, both 11 years old, from the sixth grade, and took them to an unknown destination.

The Israeli forces claimed that the two students were throwing stones in the main street between Nablus and Ramallah although eyewitnesses denied seeing any stone throwing in the area.
Israeli Navy Abducts Four Fishermen In Northern Gaza 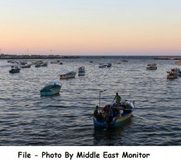 The WAFA Palestinian News Agency said the Israeli navy boats fired many live rounds at the fishing boats, close to the shore in northern Gaza, and abducted the four fishermen.

It added that the abducted fishermen have been identified as Majed Bakr, 55, Omran Majed Bakr, 27, Mohammad Ziad Bakr, 26, and Khali Johar Bakr, 22.

On Monday evening, the soldiers abducted a Palestinian merchant, identified as Hisham Abu Zayed, after interrogating him for several hours while trying to cross the Erez border terminal, in the northern part of the Gaza Strip.

Abu Zayed was returning home when the soldiers abducted him, and was taken to an unknown destination.

It is worth mentioning that the Israeli army have abducted twenty merchants from Gaza, since the beginning of this year.
Israeli Soldiers Abduct Ten Palestinians In The West Bank

The Palestinian Prisoners Society (PPS) has reported that Israeli soldiers abducted, on Tuesday at dawn, at least ten Palestinians in different parts of the occupied West Bank. On Monday evening, the soldiers abducted a merchant from Gaza, while crossing the Erez terminal.

In Hebron, in the southern part of the West Bank, the soldiers abducted a former political prisoner, identified as Rezeq Rajoub, from Doura town, south of the city.

The Hebron office of the PPS said Deikat’s abduction, came just two weeks after he served a two-year imprisonment sentence, and that he spent a total of 23 years in Israeli prisons, in previous abductions.

Also in Hebron, the soldiers invaded, and violently searched many homes in Ethna town, south of Hebron, abducted Jibrin Thiab al-Jeyyawi, 58, and illegally confiscating cash and gold from his home.

The Nablus office of the Palestinian Prisoners Society (PPS), in the northern part of the West Bank, said the soldiers searched many homes in the district, and abducted six Palestinians.

On Monday at night, the soldiers invaded a home, owned by Yasser Mizher, in the northern part of Silwad town, northeast of Ramallah, and turned it into a military post and a monitoring tower.

The soldiers said they want to monitor a bypass road, used by Israeli colonist, and passes near the mentioned property.

Silwad has been subject to ongoing invasionz and violations, while the soldiers also detained and interrogated many Palestinians, including several children.

On Monday evening, the soldiers abducted a Palestinian merchant, identified as Hisham Abu Zayed, after interrogating him for several hours while trying to cross the Erez border terminal, in the northern part of the Gaza Strip.

Abu Zayed was returning home when the soldiers abducted him, and was taken to an unknown destination.

It is worth mentioning that the Israeli army have abducted twenty merchants from Gaza, since the beginning of this year.

The Israeli Occupation Forces (IOF) arrested at dawn Tuesday ten Palestinians in a pre-dawn raid and search campaign throughout the West Bank and Jerusalem. An ex-detainee was among the reported arrests.

The Israeli army said that ten “wanted” Palestinians were detained for being allegedly involved in anti-occupation attacks.

Four Palestinians were arrested in Nablus including two activists affiliated with Hamas Movement, while two other Hamas activists were detained in Bado village, northeast of occupied Jerusalem.

Two more arrests were carried out in al-Doheisheh and Aida refugee camps, south of Bethlehem, two other young men were detained in al-Khalil including an ex-detainee.

The ex-detainee Rezeq Rajoub was re-arrested only a week after his release from Israeli jails where he spent more than two years in administrative detention.

Several young men were also summoned for investigation in Dura and Idna towns in al-Khalil.

A young woman was among the four detainees.