The Israeli occupation forces (IOF) arrested on Friday a Palestinian who was trying to cross the security fence to the north of the Gaza Strip.

Radio Israel reported that a military force arrested a Palestinian citizen after he crossed the fence separating the Gaza Strip and the Palestinian territories occupied in 1948, claiming that he was carrying a knife and a home-made bomb.

It added that the Palestinian detainee was taken to a security center for investigation without mentioning any other details regarding his identity.
Falastin Newspaper chief editor released from Israeli jail

Chief editor of the Falastin newspaper Waleed Ali was released on Thursday evening from an Israeli jail, where he had spent a total of 22 years.

A PIC news correspondent said journalist Ali had spent 22 years in Israeli lock-ups in several earlier arrests and that he was first arrested on April 21, 1993.

In 1993 and 1995 he served two administrative prison-terms respectively for 15 and five months.

In 1995 he was sentenced to five years in jail. He was rearrested in 2001 for the fourth time and jailed administratively for five years.

The Israeli authorities released, on Thursday evening, Mohammad and his brother Mahmoud, who were held under illegal Administrative Detention orders, and went on hunger strike for 82 consecutive days, until reaching an agreement for their freedom Beth.

Mohammad and Mahmoud were welcomed by hundreds of Palestinians in a massive celebration at the Manger Square, in front of the Church of Nativity, in Bethlehem, in the occupied West Bank.

They thanked every Palestinian and international who stood in solidarity with them during their strike, and thanked President Mahmoud Abbas.

It is worth mentioning that Arab Members of Knesset (MK) Dr. Ahmad Tibi and Osama Sa’adi, were among the Palestinians who celebrated the release of the two brothers in Bethlehem.

The Balboul’s also expressed their gratitude to Dr. Tibi and Sa’adi who constantly visited them, stayed with them, during the strike, and acted on the local, regional and international levels to advocate for the rights of the two detainees.

The brothers said that their victory was not personal, but a victory to every detainee, arbitrarily held by Israel, in direct violation of International Law.
EU slams Israel for administrative detention of Palestinians

The European Union (EU) has denounced Israel for its persistence in administratively detaining Palestinians with no guilt.

In a statement released by its office in Occupied Jerusalem, the EU expressed concern over Israel’s excessive use of administrative imprisonment with no indictments against the Palestinians.

It said that it was especially concerned about the deteriorating health conditions of prisoners Anas Shadeed and Ahmed Abu Fara, who have been on hunger strike for two and a half months in protest at their detention administratively.

According to its statement, there are more than 700 Palestinian administrative detainees, including three minors, in Israeli jails.

The EU called on Israel to respect its international human rights obligations towards all prisoners, and enable them to have access to legal assistance and be subject to fair trials.
IOF arrests 4 Palestinians in O. J’lem, Bethlehem

Israeli 0404 website claimed that two Palestinians were arrested in Beit Fujar and Battir, town south of Bethlehem, for being allegedly involved in anti-occupation attacks.

Following similar raids in Bethlehem city, violent clashes broke out but no injuries were reported.

Similar raids were reported in al-Khalil where two locals were summoned for investigation.

Meanwhile, Israeli forces arrested two other young men from their houses in the Old City in occupied Jerusalem.

Israeli soldiers abducted, on Friday at dawn, a Palestinian child from his home in Bab Hatta area, next to the Al-Aqsa Mosque, in the Old City of occupied Jerusalem. The army also abducted a young man in the city.

The child’s family said many soldiers invaded their home and violently searched it, causing excessive damage, and abducted Mosab Khaled Rajabi, before taking him to an interrogation center in the city.

In addition, the soldiers invaded a home in the Old City, and violently searched it, before abducting a young man, identified as Tha’er Abu Sbeih.
8 dec 2016
Hundreds of torture lawsuits against Israeli jailers unheeded

Despite hundreds of complaints of Shin Bet torture, no single criminal investigation has been launched by the Israeli authorities, Haaretz newspaper reported Wednesday.

A special unit was created seven years ago to investigate complaints against the Shin Bet, but employs just one investigator, said the Hebrew daily.

Despite dozens of "inquiries" opened in recent years, none developed into an investigation.

Even in cases where detainees provide testimonies on torture, including severe beatings and extensive sleep deprivation, no probes have been launched into Shin Bet crimes.

Hearings on a petition to the High Court of Justice revealed that in 2001-2008 nearly 600 complaints had been submitted to the unit, and every single one of the cases had been closed.

A total of 148 complaints recorded in 2014 had also gone unheeded. Dozens more were filed in 2015 and 2016 without a single investigation being launched into the charges.
24 Palestinians arrested throughout West Bank

The Israeli Occupation Forces (IOF) launched overnight and at dawn Thursday a large-scale raid and search campaign throughout the West Bank. 24 Palestinians were detained during the campaign.

In Tulkarem, Israeli forces arrested a local young man after breaking into several houses at dawn.

A military checkpoint was also erected in the area where several locals were stopped and searched.

In al-Khalil, an ex-prisoner was arrested and taken handcuffed to an unknown detention center after IOF soldiers stormed and violently searched his house.

Another young man was arrested from his house in the city.

His second son was also summoned for investigation.

In Qalqilia, Israeli forces were deployed in large numbers throughout the city before arresting a local young man and brutally attacking several others.

A military checkpoint was erected at the road linking between the city and Azzun town.

A raid and search campaign was carried out in the neighboring towns, local sources reported.

Three more arrests were carried out in Qalandia refugee camp, north of occupied Jerusalem, while a young man was rounded up in Abu Dis town to the east of the occupied city.

Four other young men including an ex-detainee were arrested in Jenin while two others were detained in al-Bireh and Bethlehem.
﻿Gazan businessman released after month in Israeli detention﻿

After his detention for about one month, the Israeli occupation authorities on Wednesday released a 60-year-old businessman from the Gaza Strip.

When he arrived at the crossing a month ago, the businessman, Hassan Abu Rashed, had been kidnapped by Israeli soldiers at Beit Hanoun (Erez) with no reason. He was in possession of a travel permit.

As part of its inhumane blockade on Gaza, Israel deliberately imposes travel restrictions on Gazan businessmen and merchants and arrests several of them every month before releasing them later.
Israeli Soldiers Abduct Two Palestinians In Qalqilia 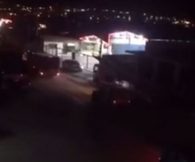 The soldiers also invaded and violently searched several homes in the city, and interrogated many Palestinians while inspecting their ID cards.
Army Abducts Three Palestinians Near Jerusalem

Media sources in the refugee camp said the soldiers abducted Ahmad Oleyyan, Mustafa Badriyya and Mohammad al-Louzi, after storming their homes, and many nearby homes, and violently searching them.

The army also closed the main Jerusalem-Ramallah road, near the Qalandia terminal and military center, and searched dozens of nearby homes and buildings.
Israeli Soldiers Abduct Five Palestinians In Hebron

The Hebron office of the Palestinian Prisoners’ Society (PPS) said the soldiers invaded Hebron city, Yatta town, south of Hebron, and Beit Ummar town, north of the city, and violently searched many homes.

The soldiers also summoned Osama Mohammad Shreiteh and Tha’er Nawaj’a, for interrogation at the Etzion military base and security center, north of Hebron.

Furthermore, the soldiers invaded homes in Beit Ummar town, and abducted Roshdi Sabarna, 22, the son of a former mayor of Hebron, in addition to summoning his other son, Ahmad, 24, for interrogation in Etzion.
Disguised soldiers kidnap kids during clashes in Shuafat camp

Israeli plain-clothes soldiers kidnapped some Palestinian teenagers during violent clashes on Wednesday evening at the entrance to Shuafat refugee camp in central Jerusalem.

Local sources said that skirmishes between local young men and soldiers took place near the Israeli military post, which is located at the entrance to the camp.

They added that the soldiers fired volleys of tear gas and stun grenades at the young men, who showered the military checkpoint with stones.

The events started after a large number of troops stormed the camp and carried out raids on homes.

In separate incidents, Israeli forces stormed on the same day al-Ram town in northeastern Jerusalem and Jabal Mukaber neighborhood in the city and clashed with local young men.