The health condition of the hunger-striking Palestinian detainees Ahmad Abu Fara and Anas Shadid has deteriorated after they stopped drinking water two days ago.

According to their lawyer Ahlam Haddad, the health condition of the hunger-striking detainees gravely worsened after they stopped drinking water last Monday, pointing out that they are now suffering from new pains in the chest, heart muscle, and groins in addition to shortness of breath and the inability to urinate.

Haddad called for an urgent intervention and immediate release of the two detainees to save their lives.

The PIC reporter was able to obtain two videos showing the deteriorated health condition of the detainees, which displayed their immense pain and suffering.

Abu Fara and Shadid were detained on 2nd August 2016 from their homes in al-Khalil in the occupied West Bank. They were then held in administrative detention, and subsequently they decided to start a hunger strike on 25th September 2016. On 12th December 2016 they stopped drinking water.

Ahmad Abu Fara, 29, from Surif town in al-Khalil, was married less than a year ago, and had previously spent two years in the Israeli jails, while Anas Shadid, 19, is a single young man from Dura town in the same province.
IOF detains Palestinian band in Nablus

The Israeli occupation forces (IOF) detained on Wednesday the members of Ghuraba for Islamic Nasheed band while they were passing Zaatara checkpoint to the south of Nablus.

Eyewitnesses told the PIC reporter that the Israeli soldiers manning the checkpoint stopped the band members’ vehicle and checked their IDs before detaining them near the checkpoint.

The band members were going to Ramallah to participate in a festival to commemorate the 29th inception anniversary of Hamas Movement.
IOA denies 57-year-old detainee right to family visits for 15 years

The Israeli occupation authorities (IOA) has been denying the Palestinian detainee Faris Baroud, 57, the right to family visits for over 15 years in Israeli jails, a rights group said Wednesday.

According to the Palestinian Prisoners Society (PPS), prisoner Baroud, arrested in 1991, has been serving a life-sentence and 35 years in Israeli jails.

PPS lawyer, who visited Baroud in the Ramon lock-up, said the detainee was finally transferred from an isolated cell, where he had been incarcerated for four years under the security pretext. 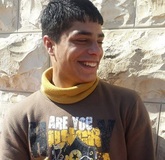 The Israeli Central Court in Occupied Jerusalem at noontime Wednesday sentenced the 17-year-old Palestinian minor Akram Tawfiq Ibrahim Abu Sarhan to nine years in prison and a fine of 10,000 shekels.

Palestinian child Abu Sarhan, a native of Jabal Al-Mukbir town, in Occupied Jerusalem, was kidnapped by the Israeli occupation forces on January 9, 2016. An Israeli court convicted him of knife-wielding and of attempting to carry out an anti-occupation stabbing attack.

Minor Abu Sarhan has been subjected to several inter-prison transfers and is currently locked up in the Megiddo jail.
Two minors among ten detainees in West Bank
The Israeli Occupation Forces (IOF) launched at dawn Tuesday a large-scale raid and arrest campaign throughout West Bank towns and cities. At least ten arrests were reported.

The IOF claimed that ten “wanted” Palestinians were arrested overnight for being involved in anti-occupation attacks.

The sources pointed out that four arrests were carried out in Nablus, while three others were reported in Bethlehem.

Weapons and some amount of money were found during the raid, the sources claimed.

Five youths, including ex-detainees, were detained during the campaign.

His family members were brutally attacked during the raid.

Two 14-year-old boys were arrested from their houses in Beit Fujar town, south of Bethlehem.

Several houses were also stormed and searched east of Nablus where two locals were arrested including a university student.
13 dec 2016
IOF arrests young Palestinian woman after alleged car-ramming attempt
Eyewitnesses and Hebrew media reported that the Israeli occupation forces (IOF) arrested on Tuesday a young Palestinian woman who was riding a private car for an alleged car-ramming attempt at the Qalandia checkpoint.

According to the Hebrew website 0404, the IOF soldiers opened fire at the young woman at the Qalandia military checkpoint to the north of Jerusalem. However, eyewitnesses at the scene said that she was arrested without firing a shot yet she was severely beaten by the Israeli soldiers.

The IOF closed the checkpoint in both directions and prevented the citizens from approaching the site after the incident.
Arrests, jewelry theft reported in Israeli West Bank sweep

At least eight Palestinian civilians were kidnapped by the Israeli occupation forces (IOF) at dawn Tuesday in a mass abduction sweep launched across the West Bank.

The Israeli radio claimed that eight Palestinians were arrested on suspicion of involvement in anti-occupation activities.

The same source added that the occupation army seized a home-made rifle in Balata refugee camp, in Nablus and arrested the rifle holder.

At the same time, dozens of Israeli settlers forced their way into Joseph’s Tomb, in eastern Nablus under a tight security shield.

A PIC on-the-spot reporter said buses carrying Israeli fanatics flocked to Beit Furik checkpoint at 1 a.m while a chain of military checkpoints was pitched by the Israeli border police patrols at al-Ghazi crossroads and Amman Street.

Meanwhile, Israeli soldiers broke into the family home of prisoner Ahmad Hani Hamdi in Nablus at 1:30 a.m. and wreaked havoc on the building before they stole jewelry worth 8,000 dinars. Jewels estimated at 4,000 dinars belong to the family’s bride-to-be daughter.

The father displayed bills proving that the family purchased the jewelry from a recognized jeweler and refused to sign the confiscation document after he found out that the data jotted down by the soldiers did not match the stolen belongings.

The family appealed to the human rights institutions to work on returning the stolen jewelry.

Ahmad’s sister, Israa, said her brother has been held in Israeli detention for over one month and that her husband Muayad Sharab has been locked up in Israeli jails for 118 days running.

Overnight, the IOF kidnapped Ali Mohamed Mseimi and Bassem Hassan Marshoud from the Balata camp, in eastern Nablus as they tried to pass through a flying checkpoint set up near Yatma town. The occupation army claimed the youngsters were holding a gun.

Youngster Mo’men Kmeil, 20, was also kidnapped by the IOF from his own family home in Jenin’s southern town of Qabatiya.

Meanwhile, violent clashes burst out in Qalqilya, where the IOF unleashed spates of bullet fire and stun grenades. The occupation troops further rummaged into civilian homes and subjected the residents to intensive questioning.

Clashes also rocked Nour Shams camp in Tulkarem at the crack of dawn after the occupation soldiers kidnapped 18-year-old Mohamed Darwish from his own family home and dragged him to an unknown destination.

The occupation troops attacked the Palestinian protesters with waves of teargas canisters and sound bombs. Several civilians choked on teargas inside their homes.
Israeli court sentences Palestinian lawmaker to 17 months in jail

The Israeli Ofer military court on Monday sentenced the Palestinian MP Mohamed Abu Teir to 17 months in jail and a fine of 8,000 shekels, along with a 30-month suspended sentence.

The sentence was slapped by the occupation authorities against Abu Teir after he had spent 11 months in administrative detention, with neither charge nor trial.

65-year-old Abu Teir was arrested by the Israeli occupation forces on January 27, 2016. He had spent a total of 34 years in Israeli lock-ups.

In 2006 he was elected as a member of the Palestinian Legislative Council. The occupation authorities banned him from Occupied Jerusalem on allegations of anti-occupation activism.

“The Israeli occupation has not only bereaved Jerusalemite lawmakers of their IDs and banned them from the holy Jerusalem City; it has also been sending them to jail in an attempt to squash anti-occupation and anti-Judaization voices,” the lawmaker further stated.
Page:  8 - 7 - 6 - 5 - 4 - 3 - 2 - 1
Powered by