As the region has been affected by a low pressure cold front, Palestinian detainees held in Hawara detention center have complained about their catastrophic detention conditions.

The Palestinian prisoners appealed to all human rights and humanitarian organizations, particularly the International Committee of the Red Cross, to promptly intervene and pressure Israel to take the necessary measures to ensure the well-being of prisoners.

According the PA committee for prisoners’ affairs, the prisoners are being held in small cement rooms that lack basic health standards, suffering from overcrowding, extreme cold, and lack of heating methods.

The region was hit with a cold front on Monday, which worsened the incarceration conditions of Palestinians held in the Israeli jails.
Nael Barghouthi faces possibility of re-imposing life sentence

The Palestinian prisoner Nael Barghouthi, 59, continues to be held in Israeli jails despite having served his prison sentence of 30 months, the Palestinian Prisoners Society (PPS) said Saturday.

An appeal was submitted by the Israeli prosecution seeking to re-instate a previous life sentence on Barghouthi.

Barghouthi was first arrested in April 1978 and spent 34 years behind Israeli bars before being released as part of the Wafa al-Ahrar exchange deal.

In 2014, during an Israeli mass arrest campaign, he was re-arrested by military order number 1651 along with dozens of ex-detainees in total violation of the prisoners swap deal.

Today, he has spent over 36 years in Israeli prisons.
Israeli Soldiers Abduct A Palestinian Child In Silwad

The Palestinian Prisoners Society (PPS) said the child has been identified as Ward Abdul-Qader Hamed, 15, and that he was abducted after the soldiers stopped him at the western entrance of the town.

It is worth mentioning that the abducted child is the son of Qaddoura Fares, the head of the Palestinian Prisoners’ Society.
Israeli Soldiers Invade Shu’fat Refugee Camp 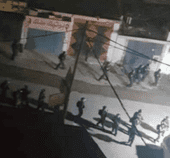 Israeli soldiers invaded, Friday, several neighborhoods in Shu’fat refugee camp, in the center of occupied East Jerusalem, and clashed with scores of youngsters who hurled stones and empty bottles on the advancing army vehicles.

The WAFA Palestinian News Agency said the soldiers fired dozens of live rounds, rubber-coated steel bullets and gas bombs on the protesters, after the army invaded the refugee camp from several directions.

There have been no immediate reports of injuries or abductions during the invasion, while the soldiers also surrounded the refugee camp.

On Thursday at night, the Israeli army said six of its soldiers were wounded, including one who was moved to a hospital, during clashes that took place in the refugee camp.

Similar clashes took place in al-‘Eesawiyya town, in the center of Jerusalem, Silwan town, south of the al-Aqsa Mosque in the city, Abu Dis town, southeast of Jerusalem, in addition  to the at-Tour and Jabal az-Zeitoun neighborhoods, overlooking the Old City.

In related news, the army abducted a young Palestinian man, identified as Mahmoud ‘Oleyyan, after stopping them at the al-Hamra roadblock, near the northern West Bank city of Nablus.

The Palestinian, from the al-Far’a refugee camp, south of Jenin, while he was heading back home from Jericho.
Israeli Soldiers Assault Nonviolent Activists In Bil’in

The protest was held by approximately 20 international activists, 20 Palestinians and 10 Israelis, who marched from the center of the village, carrying Palestinian flags and heading towards the villager’s isolated orchards.

They also carried posters of late Palestinian government Minister, Ziad Abu Ein, who was killed by Israeli soldiers during a nonviolent activity, near Ramallah, in December 2014, and chanted against the ongoing illegal Israeli occupation, colonies and escalating violations against the civilian population in occupied Palestine.

The army assaulted the protesters as they approached the gate of the Annexation Wall, and fired many gas bombs and concussion grenades at them, causing many to suffer the effects of teargas inhalation.

The Palestinian prisoner Nader Zubeidi, 38, suffers from a very difficult health condition and he was transferred more than once to Israeli hospitals over the few past days, a rights group revealed.

The Palestine Center for Prisoners Studies (PCPS) said that the prisoner Zubeidi, who has been held in Israeli jails for nearly 15 years, have been suffering from severe abdominal pain for four months.

Medical tests affirmed that he suffers intestinal parasites worms infection; however, he did not receive any medical treatment with the exception of painkillers which led to his health deterioration.

Zubeidi, who is currently held in Negev prison, has recently become unable to move on his own, in addition to suffering from urinary tract infection and hemorrhoids.

The PCPS pointed out that Zubeidi was arrested in 2003 after being shot with three bullets. He is still suffering from the injury effects as he did not receive any medical treatment at that time.

Zubeidi was banned from family visits since his arrest for being allegedly affiliated with Hamas’s armed wing, al-Qassam Brigades.

During his detention, he was subjected to severe torture and tough investigation.

The Palestinian prisoner Ammar Hamour, 28, has been on hunger strike for 25 days in protest against his administrative detention.

Hamour has recently been transferred to solitary confinement in Ashkelon prison.

His health situation has seriously deteriorated as he boycotts medical tests and Israeli hospitals.

Hamour, from Jenin, was arrested on February 16, 2016 and held since then in administrative detention.

The prisoners Anas Shadeed and Ahmed Abu Fara have continued their hunger strike for 84 days in protest against Israeli policy of administrative detention according to which they are held without charge or trial under the pretext of secret security files.

Along the same line, the prisoner Kifah Hattab, 54, has been on hunger strike for 21 days, demanding to be considered a prisoner of war in accordance with the Fourth Geneva Convention.

Hattab, from the city of Tulkarem in the occupied West Bank, is a captain pilot in the Palestinian Authority and has been held in Israeli prison since 2003, when he was sentenced to two life sentences for alleged involvement in an armed organization during the Second Intifada.
Alarm sounded over imminent death of 2 hunger strikers

A lawyer has sounded the alarm over the exacerbated health status of Palestinian hunger-strikers Ahmad Abu Fara and Anas Shedid, saying they might die at any possible moment.

Speaking with a PIC journalist, lawyer Ahlam Haddad warned of the imminent death of Abu Fara and Shedid, who have been on an open ended hunger strike for 83 days running.

Over the past three days, both hunger strikers refused to drink water. As a result, their health condition has seen a critical turn for the worse.

Lawyer Haddad added that hunger striker Shedid has been suffering severe dehydration and excruciating groin pains. He has also been diagnosed with asthma and cardiovascular disorders.

According to the lawyer, both hunger strikers have been suffering urinary retention over the past couple of days.

She quoted the detainees as vowing to continue their hunger strike no matter the price and until they restore their freedom.

At the same time, the prisoners and ex-prisoners committee on Thursday evening warned that the two hunger strikers are on the verge of death after they decided to stop drinking water.

Shedid and Abu Fara, both natives of the southern West Bank province of al-Khalil, have been on an open-ended hunger strike for 83 days in a row to protest their administrative detention, with neither charge nor trial, in Israeli jails. As of Monday evening, they stopped drinking water.
IOF rolls into western Jenin, summons youth to questioning

A PIC news correspondent said the occupation soldiers broke into al-Sila al-Harithiya at the crack of dawn and summoned 22-year-old Mohamed Abdul Raheem Tahayneh to interrogation after they rummaged into his family home.

At the same time, the IOF sealed off the Jenin-Haifa road with a makeshift military checkpoint, where Palestinian passengers and vehicles have been subjected to exhaustive inspection.

The Israeli army troops further cordoned off neighborhoods and access roads between the Salem military camp, to the west of Jenin, and Zabouba town.
Month after detention, Palestinian youth suffers from injuries sustained during Israeli raid

The Palestinian Prisoner’s Society (PPS) said in a statement Thursday that an 18-year-old imprisoned Palestinian from the al-Duheisha refugee camp in the southern occupied West Bank district of Bethlehem was assaulted by Israeli forces during his detention in November, causing serious injuries that the youth has continued to suffer from.

Muhammad Yasser Rizq al-Malhi was assaulted by Israeli forces during an Israeli military detention campaign in the refugee camp on November 2, causing him fractures in his chest, according to PPS.

The group noted that al-Malhi was already severely injured at the time of his detention, after Israeli forces had shot him with five live bullets several months ago.

PPS added that al-Malhi was currently being held in Israel’s Ofer prison and has suffered from severe pains in his chest, which doctors have said could last for another five months.

An Israeli army spokesperson said they were looking into reports.

Israeli forces have come under repeated criticism for excessive use of force, as detention raids often turn violent as scores of Palestinians have been injured during routine military campaigns, while others have been killed by Israeli forces.

In August, a report released by Palestinian NGO Badil documented the Israeli army’s targeting of Palestinian youth with live fire in al-Duheisha, specifically shooting youth in the kneecaps and legs.

The investigation was launched after reports emerged of an Israeli army commander responsible for Bethlehem’s three refugee camps making repeated threats to make “all youth in the camp disabled.”

The NGO has said that the threats "reinforce the claim made by BADIL that these threats and actions are not accidental or isolated incidents, but rather result from a systematic Israeli military policy aimed at suppressing resistance, terrorizing Palestinian youth, and causing permanent injuries and damage to their physical and mental well-being."

"These willful and grave breaches of international law trigger the obligations of third party states and other mandated agencies to put an end to this climate of impunity under which Israeli forces and its officials operate," the group added.

According to prisoners' rights group Addameer, some 7,000 Palestinians were imprisoned by Israel as of October, the majority of whom were detained during the near-daily overnight raids conducted by the Israeli army in the occupied Palestinian territory.
Israeli forces detain Palestinian at Qalqiliya-area checkpoint

Israeli forces detained a Palestinian "youth" at a flying checkpoint overnight Friday in the city of Qalqiliya in the northern occupied West Bank.

The youth was identified by locals as Salah al-Din al-Titi from Hebron’s al-Arrub refugee camp in the southern West Bank.

An Israeli army spokesperson told Ma’an that there Israeli forces did not detain any Palestinians overnight between Thursday and Friday.

According to UN documentation, Israeli forces conducted nearly 100 search operations and arrested around 120 Palestinians in the occupied West Bank, including 29 children , between Nov. 29 and Dec. 12.