An Israeli magistrate court in Jerusalem sentenced a Palestinian mother of six on Thursday to a year in prison and a fine of 12,000 shekels ($3,203) for depositing funds into a prison commissary belonging to a Hamas-affiliated Palestinian prisoner held in Israeli custody.

Lawyer Muhammad Mahmoud from prisoners’ rights group Addameer told Ma’an that Dalal Abu al-Hawa from Jerusalem’s Old City was sentenced for depsoiting the funds. Israel Prison Service (IPS) allows families of Palestinian prisoners in Israeli custody to deposit a fixed amount of money each month into a prisoner's commissary, which they can then use to purchase items from the prison’s canteen.

However, since Israel considers Hamas to be a “terrorist organization,” families of Hamas-affiliated Palestinian prisoners are extremely vulnerable to being detained and charged by Israeli authorities when interacting with imprisoned family members.

A spokesman for the Jerusalem Committee for Families of Prisoners, Amjad Abu Asab noted that Abu al-Hawa was detained on Aug. 28 from her home, before Israeli police forces stormed the house and searched it, while confiscating mobile phones and other properties.

Abu al-Hawa, he added, is a mother of six. One of her sons, 17-year-old Omar Khalil Abu al-Hawa, is also serving two years in Israeli prison.

Addameer has reported that 6,500 Palestinians are imprisoned in Israel, according to their January statistics, 353 of whom are women and children.
Four Israelis injured in shooting, stabbing attacks in Tel Aviv

Four Israelis were wounded in a shooting and stabbing attack at a market in Petah Tikva town in Tel Aviv on Thursday afternoon, Israeli media sources revealed.

Israeli 0404 website reported that the injuries were described as ranging from light to moderate in the upper parts of their bodies.

Israeli police said, in a statement, that an 18-year-old Palestinian of the West Bank city of Nablus was arrested after shooting at an Israeli woman. Israeli authorities were investigating the motives surrounding the incident, the statement added.
Palestinian woman sentenced to 18 months in prison

Israeli Ofer court sentenced Wednesday evening the Palestinian female prisoner Najwan Awda to 18 months in prison plus a fine of 27,000 $US.

The Palestinian Prisoners Society (PPS) said that Awda was convicted of working in a “banned charitable organization.”

Bakri, from al-Khalil, was arrested after being shot and injured by Israeli forces on December 13, 2015 while leaving her school.

During her arrest, Bakri was left bleeding for hours without any medical aid before being taken to hospital and then to HaSharon prison.
Talks continue between Palestinian prisoners and the IPS

Prisoners' Media Office denied what has been reported on media with regards to reaching a deal between Palestinian detainees and Israeli Prison Service (IPS).

Abdurrahman Shadid, Head of Prisoners' Media Office, affirmed that talks are still going on between both parties and no agreement has been reached yet.

Shadid told the PIC reporter that Palestinian detainees have just started a new outreach session with the IPS. Some issues have been agreed upon and others still under discussion, he pointed out.

Israel’s Ofer military court has issued administrative detention orders, with no indictment or trial, against dozens of Palestinian prisoners, including a journalist, since the start of November.

The Palestinian Prisoner Society (PPS) stated on Wednesday that the court issued 31 administrative detention orders against prisoners, including journalist Mohamed al-Qiq, between the 1st and 8th of February

According to a statement released by the PPS, journalist Qiq has been on hunger strike for over three days in protest at his detention administratively, with no guilt. He has been in jail since January 16.

These detention orders extend between three to six months, and nine of them were issued against prisoners jailed for the first time or rejailed after releasing them.

An administrative detention is based on orders from the Israeli authorities or the army, without an indictment or trial at a criminal court. The vast majority of detainees are residents of the occupied Palestinian territories.

People who are held under administrative detention often spend months or years in jail, without receiving any information regarding their accusations.

In all cases, evidence and legal material that supposedly justify the detention remain undisclosed due to security reasons, and cannot be viewed by the detainee or his lawyer.

Five Jerusalemites were brutally attacked and arrested Wednesday evening at the hands of Israeli police forces in Silwan town, south of occupied Jerusalem.

Several arrests were reported during the raids, according to the sources.

A local house owned by Amin Siam was violently stormed and searched during the raid, while by-passers were brutally attacked for unknown reasons.

Jawad Siam, director of WHIC, was detained during the raid campaign along with Omar Siam, Mohammad Siam, Dia’ Baydoun and Hilal Baydoun after being severely assaulted and beaten by Israeli police. 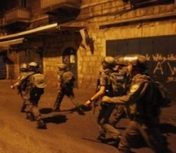 The Palestinian Prisoners Society (PPS) has reported that Israeli soldiers abducted, overnight and until dawn hours Thursday, eleven Palestinians, including two children, during invasions and violent searches of homes and property, in different parts of the occupied West Bank.

The PPS in Ramallah, in central West Bank, said the soldiers abducted Ahmad Odah al-Qadi, 50, and his son, Mustafa, from their home in Mazare’ Nobani town, after interrogating them and searching the property.

In Bethlehem, the soldiers also invaded a print shop in Bethlehem, in addition to abducting Mohammad Ibrahim al-‘Amour, 23, from his home in Teqoua’ town, east of the city.

Also in Bethlehem, the soldiers invaded homes in ‘Aida refugee camp, and abducted a child, identified as Ali al-Jawareesh, 13.

Furthermore, the soldiers invaded and searched homes in Shweika area, in the northern West Bank district of Tulkarem, and abducted Abdul-Salaam Mustafa Badawi, 40.

Another Palestinian, identified as Ahmad Fayez Sa’adi, was abducted in the Jenin refugee camp, in the northern West Bank district of Jenin, after the soldiers invaded and searched several homes.

On the other hand, Israeli court extended last night the detention of three Jerusalemite youths till February 21 and March 15.

Two other Jerusalemites, including a guard in al-Aqsa Mosque, were denied entry into the holy shrine for 15 days.
12 Palestinians arrested in Israeli pre-dawn raids

The Israeli Occupation Forces (IOF) arrested overnight and at dawn Wednesday 12 Palestinians after carrying out large-scale raid and search campaigns.

IOF claimed that nine “wanted Palestinians” were arrested for allegedly being involved in anti-occupation activities.

A Palestinian young man was rounded up in Tulkarem, while four others were arrested in Bethlehem, according to the Israeli sources.

Four other arrests were carried out in al-Khalil.

Weapons were allegedly found during the raids, the IOF claimed.

Meanwhile, local sources affirmed that Israeli forces stormed last night Sebastia town, north of Nablus, and removed the Palestinian flag raised on an archaeological site in the area which led to the outbreak of violent clashes.

Two youths were arrested during the clashes and taken to unknown detention centers, the sources pointed out.

Breathing problems due to teargas inhalation were reported among the residents.

In Bethlehem, Israeli forces stormed Aida refugee camp and broke into a local rights group center before briefly detaining its members and confiscating its equipment.

Salah Ajarma, head of the center, was then arrested and taken to Rachel military center.

A number of local youngsters were also summoned for investigation for unknown reasons.

Along the same line, Israeli occupation soldiers stormed Jenin and carried out military drills while an Israeli helicopter was seen hovering over the area.

According to the PIC reporter, a young man, from Qabatia town, south of Jenin city, was arrested at a military checkpoint near Bethlehem.
Palestinian hunger striker released on bail

Palestinian female prisoner Randa Shahatit was released from Israeli jails late Tuesday after she waged a hunger strike for 17 days.

Shahatit, a mother of three children, was re-arrested on January 20, 2017 after being released during Wafa al-Ahrar swap deal for allegedly violating the deal terms.

Shortly after her release, Shahatit told PIC reporter that Israeli authorities charged her of planning to carry out anti-occupation attacks.

On January 20, I was stopped at an Israeli military checkpoint near Fawar refugee camp and transferred for investigation, she said.

I was then held in administrative detention for 48 hours before being extended to 17 days despite my difficult health condition, he continued.

“Thus, I decided to declare a hunger strike in protest against my administrative detention.”

After refusing food for ten consecutive days, Shahatit was released on a bail of 10,000 shekels.

Her driving licence was also withdrawn for a whole year.

Israeli authorities also threatened to re-impose her previous four and a half years sentence, of which she served three years, in case of any further charge.

The Palestinian journalist Mohamed al-Qeiq was moved Wednesday to solitary confinement after he declared an open hunger strike in protest against his illegal administrative detention, family sources revealed.

Speaking to Quds Press, Fayhaa said that the move was expected and aims at putting more pressures on her husband in order to break his strike.

She called for popular support to her husband’s new hunger strike.

A hearing is expected to be held in Ofer court on Thursday to approve his six-month administrative detention sentence, she added.

Al-Qeiq, who lives in Ramallah and is originally from Dura in the southern occupied West Bank district of al-Khalil, was released from prison in May 2015 after he refused food for 94 days also in protest of his administrative detention at the time.

However, al-Qeiq was re-detained in mid-January after he participated in a protest in the occupied West Bank city of Bethlehem demanding the release of bodies of slain Palestinians held in Israeli morgues.
IOF wreaks havoc on prisoner’s home, kidnaps civilian at daybreak

The Israeli occupation forces (IOF) at daybreak Wednesday stormed Tulkarem and aggressively attacked a prisoner’s family, before they kidnapped a Palestinian civilian.

Reporting from Bethlehem, a PIC news correspondent said dozens of Israeli soldiers broke into the home of the Palestinian detainee Ahmad al-Hweiti in Tulkarem refugee camp and wreaked havoc on the building, just one day after al-Hweiti and his wife had been arrested by the IOF.

The Israeli soldiers came down heavily on al-Hweiti’s family members all the way through the assault.

The occupation troops further rolled into Thanaba area, in Tulkarem, and ravaged the home of the Palestinian citizen Muhannad Matar before they arrested him and dragged him to an unidentified destination.
Page:  6 - 5 - 4 - 3 - 2 - 1
Powered by