A Palestinian civilian and his seven sons, along with his daughter-in-law, were kidnapped on Saturday by the Israeli occupation forces (IOF) from the southern West Bank province of al-Khalil.

An Israeli army patrol and police troop, escorted by sniffer dogs and military jeeps, rolled into al-Samou’s western entrance of al-Simia, in southern al-Khalil, and wreaked havoc on civilian homes.

The assault culminated in the abduction of the Palestinian civilian Mohamed Moussa Bheis and his seven sons Moussa, Imad, Rami, Jihad, Rafat, Ali, and Raed.

The wife of one of the aforementioned sons was also kidnapped by the Israeli soldiers in the process.

The nine arrestees were all dragged to an unidentified destination.

The attack makes part of a collective punishment policy pursued by the Israeli occupation army against Palestinian anti-occupation protesters and their families.
IOF arrests Palestinian girl in al-Khalil

The Israeli occupation forces (IOF) arrested a Palestinian girl on Saturday at the entrance of the Ibrahimi Mosque in al-Khalil city on charges of possessing a knife.

The PIC reporter said that Israeli soldiers arrested a girl, whose identity was not disclosed, while she was passing through a military checkpoint set up at the entrance of the Ibrahimi Mosque.

The IOF repeatedly fabricates charges against Palestinians and accuse them of stabbing attempts against Israeli soldiers ever since the Jerusalem Intifada erupted in October 2015.
East Jerusalem teen tells Ma'an about medical negligence he faced in Israeli prisons

A 17-year-old former prisoner from the Wadi al-Joz neighborhood of occupied East Jerusalem, who was released this week from Israeli custody after over a year in prison, detailed the account of his detention to Ma’an on Friday, saying he was “on the verge of death” in Israel's Megiddo prison.

Majd Nadir Saida told Ma'an of the day he was detained, Sept. 30, 2015, saying “six undercover Israeli officers attacked me near my house, beating me violently and firing gunshots into the air to prevent anyone from helping me.”

Shortly after, Israeli forces took the teenager -- who was 15 at the time -- to Israel’s “Oz” police station in the Jabal al-Mukabbir neighborhood of East Jerusalem, and then to the Russian Compound interrogation center.

Saida told Ma’an he sustained bruises and cuts on his head, neck, and face, during the violent detention.

The teenager was then taken to Israel’s HaSharon prison before being transferred to Givon prison, which he says was a prison for African migrants and asylum seekers who enter Israel without proper documentation.

"The living conditions in Givon prison were very bad and very hard. I stayed there for two months and the wardens used to storm the prisoners' rooms violently every week for inspection, beating us every time."

He was then moved to Megiddo prison.

My "tragedy", he said, started in April 2016 when I started to feel severe abdominal pains which lasted for a week. "A doctor at Megiddo prison checked me and gave me standard painkillers. However, pains increased day after day and were more severe than I can describe. One day the doctor checked me and asked me to drink a Coke so he can diagnose the cause of pain,” Saida said.

“After I drank the Coke at the doctor's request, I couldn't sleep due to the severe pains and tiredness I felt."

Saida told Ma’an that his pains reached such a severe point that his fellow prisoners shouted at the Israeli guards to bring a doctor, who only came after Saida’s cellmates continued shouting.

The doctor checked Saida through a small window in the room's door without opening the door.

"He just took my temperature and asked me to drink water."

An hour later wardens opened his room and moved him to another room with older prisoners. "The next day I was taken to Afula prison hospital in a police vehicle. Both my hands and feet were cuffed."

Doctors decided that Saida urgently needed surgery on his appendix, saying that it had been left untreated and was perforated “spilling poisonous and infectious material into the abdomen.”

"I stayed 22 days in hospital with both my hands and feet tied. Whenever I needed to go to the toilet, I had to wait half an hour until they obtained approval from the prison manager,” Saida said, pointing out that he also needed approval to take a shower, a process that would take about one hour and required the presence of an officer inside the room while he showered, and another outside.

Saida said suffered from severe weight loss and weighed only 37 kilograms (81 pounds) after his stay in the hospital.

His father Nadir told Ma’an that a doctor from the Afula hospital called him for permission to operate on Majd, which was the first time he learned that his son was even sick in the first place.

“I asked to go to the hospital myself, but the doctor told me that if I don't approve the surgery I would see my son as a dead body, so I approved the surgery on the phone,” Nidal said.

Saida's mother and uncle were able to visit him after the surgery and stay with him for an hour, his father said, highlighting that the two had to wait for hours before being allowed to see Majd.

"I visited him three times at Afula hospital, once every week, " Saida’s mother said, saying that Israeli officers prevented her from actually touching or getting close to her son.

Rights groups have widely condemned Israel for its medical negligence of Palestinians in its prisons, which Addameer has called a "deliberate policy of neglect."

In August, a number of Palestinian rights organizations established a committee to follow the cases of Palestinians in poor health being held in Israeli prisons.

Prisoners’ rights group Addameer has reported that 6,000 Palestinians are curently being held in Israeli prison, according to their January statistics.
Israeli Soldiers Abduct Three Palestinians In Qalqilia

Morad Eshteiwy, the coordinator of the Popular Committee against the Wall and Colonies in Kufur Qaddoum, said the soldiers attacked the three young men, and abducted them before moving them to a nearby military base. 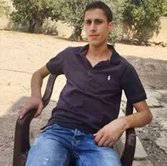 Head of the the PA committee for prisoners’ affairs Issa Qaraqe affirmed in a brief statement issued Friday afternoon the death of the injured prisoner Mohamed Jalad.

Jalad was arrested in Nov. 2016 after being seriously injured by Israeli forces for an alleged stabbing attack near Hawara checkpoint, Qaraqe pointed out.

Qaraqe has previously warned more than once of Jalad’s serious health condition.

A Palestinian held in Israeli custody succumbed to his wounds on Friday after being shot by Israeli forces in Nov. for allegedly attempting to carry out a stabbing attack.

Issa Qaraqe, the head of the Palestinian Committee of Prisoners’ Affairs, told Ma’an that 24-year-old Muhammad al-Jallad (also reported as Muhammad Amr) died in Israeli custody while at the Beilinson Hospital in the city of Petah Tikva in central Israel.

Al-Jallad was shot by Israeli forces on Nov. 9, 2016 at the Huwwara military checkpoint in the southern part of the occupied West Bank district of Nablus, Qaraqe said.

Israeli authorities claimed that al-Jallad had attempted to stab an Israeli soldier with a screwdriver before Israeli forces opened live fire on him.

According to Qaraqe, Israeli forces took al-Jallad into custody at the time and transported him to Beilinson hospital for treatment.

Qaraqe added that al-Jallad had also suffered from lymphoma.

Al-Jallad became the ninth Palestinian to be killed by Israeli forces this year, with 112 Palestinians killed in 2016, according to Ma’an documentation.

Israel has come under repeated criticism for using lethal force on Palestinians when they pose no harm or they could be detained through nonlethal means, with the PLO labeling the deaths "extrajudicial executions."

Head of the Jerusalem Committee for Families of Prisoners Amjad Abu Assab affirmed that the young man Yasser Basti, 21, was sentenced to three years imprisonment for stone-throwing charges.

Basti was detained on Oct. 12, 2015 and currently held in Ohalei Kedar Detention Center south of Israel, he added.

Meanwhile, the 17-year-old boy Youssef Abu Shukheidim was sentenced to nine months plus a fine of 800 $US.

The two children Mohamed Khatib, 15, and Ahmed Fawaqa, 14, were also sentenced to ten months in prison after being convicted of throwing stones at Israeli soldiers.

Both boys were detained on Dec. 13, 2016 and currently held in Megiddo prison.

In Nov. 2015, Israel passed a law establishing a maximum prison sentence of three years for Palestinians who are allegedly involved in stone-throwing attacks.

Defense for Children International (DCI) – Palestine said the legislation will have "an even more harmful effect" on Palestinian children, who are often "detained arbitrarily" or arrested without reliable evidence of accusations.

According to DCI-Palestine's statistics, at least 53 percent of Palestinian children in occupied Jerusalem arrested by Israeli forces are subjected to violence, while 86 percent are coerced into signing confessions in Hebrew, a language they do not know.
Israeli army storms home of Petah Tikva anti-occupation attacker

The Israeli occupation forces (IOF) at dawn Friday stormed the home of the Palestinian protester who carried out an anti-occupation attack in Petah Tikva on Thursday.

The IOF rolled into Beita and Ousrin towns, in southern Nablus, just a few hours following the Petah Tikva anti-occupation attack, carried out by 19-year-old Sadiq Nasser Aweida, a native of Beita.

According to local sources, the IOF broke into Aweida’s family home at daybreak and subjected all the family members to exhaustive interrogation.

The occupation troops further wreaked havoc on civilian homes in the town and kidnapped two friends of Aweida—Radi al-Jaghoub, 19, and Adham Eili, 19.

24-year-old Samer Adeili was also kidnapped by the IOF from the nearby Ousrin town and got his car seized on claims of transferring Aweida from Beita to Azzoun town before he headed to Petah Tikva and performed the operation.

Aweida’s father, working in the 1948 occupied territories, was reportedly kidnapped by the Israeli forces just a few minutes after the Attack.