The Israeli Magistrate Court extended on Wednesday the detention of ten Jerusalemites who were earlier detained during a pre-dawn raid in Issawiya town in occupied Jerusalem.

The Palestinian Prisoners Society (PPS) affirmed that the detention of ten youths was extended only few hours after their arrest.

The court also released the lawyer Medhet Deiba on a bail and prevented another detainee from meeting his lawyer.
Soldiers Summon A Child And A Teacher For Interrogation In Jerusalem

Israeli soldiers summoned for interrogation, Wednesday, a Palestinian child and a teacher from occupied Jerusalem.

Media sources said the child, identified as Abdul-Rahman Bilal Mahmoud, 11, was summoned for interrogation after the soldiers invaded his home in the al-‘Isawiya town, and abducted his brother Hasan.

They added that the soldiers also summoned for interrogation a teacher, identified as Khadija ‘Oweiss, who is a former political prisoner, and was frequently detained and interrogated by the police, for protesting the ongoing Israeli violations, and invasion into the Al-Aqsa Mosque.

During some of her previous abductions and interrogations, ‘Oweiss also received orders denying her access to the Al-Aqsa Mosque and the Old City for various periods of time.
Soldiers Abduct Three Palestinians In Jenin

The Jenin office of the Palestinian Prisoners’ Society (PPS) has reported that many army vehicles invaded Jenin refugee camp, before the soldiers stormed and ransacked homes.

Israeli soldiers abducted, on Wednesday at dawn, twenty-two Palestinians, including the governor of occupied Jerusalem, Adnan Gheith, and a lawyer, identified as Midhat Deebiyya, from their homes Silwan and the al-‘Isawiya towns.

The soldiers conducted very violent searches of homes, and interrogated dozens of Palestinians, before abducting 23 of them, and took them to the al-Maskobiyya detention and interrogation facility, in Jerusalem.

Among the abducted Palestinians is the governor of Jerusalem, Adnan Gheith, who is a also former political prisoner and was frequently abducted, interrogated and detained, in addition to the Midhat Deebiyya, a lawyer and a researcher in Jerusalem affairs.

The abductions have escalated since the Palestinians managed to reopen Bab ar-Rahma Mosque, last Friday, after it was closed by Israeli for sixteen years.

It is worth mentioning that the soldiers have abducted more than 100 Palestinians from several parts of occupied Jerusalem, and issued order against 120 Palestinians, preventing them from entering the Al-Aqsa Mosque compound.

The governor of Jerusalem also received an order preventing him from entering the West Bank for six months.

Israeli soldiers abducted, on Wednesday at dawn, three Palestinians from Hebron governorate, in the southern part of the occupied West Bank.

The soldiers invaded and searched homes in Hebron city, and abducted one Palestinian, identified as Sobhi Abu Zeina.

In addition, the army invaded many neighborhoods in Hebron city, and installed roadblocks in Jouret Bahlas area, in addition to the entrances of Ethna and Halhoul towns, before stopping and searching dozens of cars, and interrogated many Palestinians while inspecting their ID cards.
Israeli forces detain Palestinian Governor of Jerusalem

Israeli forces detained the Palestinian Governor of Jerusalem, Adnan Ghaith, on Wednesday morning, after raiding his home in the Silwan neighborhood, in occupied East Jerusalem.

Last December, the Israeli authorities had also banned Gaith from entering the West Bank for six months and from travelling outside Palestine.
Israeli occupation extends remand of Muslim imam

Israeli policemen on Tuesday extended the detention of al-Aqsa’s staff member and imam Raed Da’na for another 24 hours.

Israeli forces stormed Da’na’s home in Beit Hanina, north of occupied Jerusalem, in the afternoon, before they arrested him.

A few days earlier, the Israeli police ruled that Da’na be banned from al-Aqsa Mosque for six months, after he was arrested outside of al-Amoud Gate, in occupied Jerusalem.

A couple of weeks ago, Da’na led Sunday’s Muslim congregational prayers outside of al-Rahma Gate in al-Aqsa Mosque compound, protesting Israel’s closure of the gate.

Shortly after, worshipers smashed the chains set up by the Israeli forces to lock the gate, which had been kept shut by the occupation authorities for nearly 16 years.
26 feb 2019
Jerusalemite teacher banned access to al-Aqsa

Halawani was arrested on February 20 from her family house before being shortly released.

She was previously banned from entering the Mosque on several occasions, most recently was for six months.

Israeli police summoned Halawani for an interrogation before she was handed the ban order.
IOF arrests four Palestinians at checkpoint

Local sources told PIC reporter that a military checkpoint was set up between Azzun and Jayyos towns, east of the city. 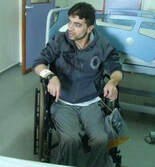 The Palestinian paralysed prisoner Moataz Abidu, from al-Khalil, started on Tuesday an open-ended hunger strike in protest against his continued administrative detention in Israeli jails.

The Palestinian Prisoners Society (PPS) said that Abidu was sent to solitary confinement shortly after declaring a hunger strike.

Abidu was shot and injured during his arrest in 2011, causing paralysis on his left leg and weakness and loss of control on the right leg, the PPS added.

However, Israeli prison administration only provides him with painkillers despite his difficult health condition.
Israeli court approves 13 administrative detention orders

Administrative detention is imprisonment without trial or charge, it has no time limit, and the evidence on which it is based is not disclosed. Israel utilizes this measure extensively and routinely, and has used it to hold hundreds of Palestinians for lengthy periods of time.

According to prisoners rights group Addameer, there are 5,450 Palestinian prisoners being held in Israeli prisons, of whom 495 are in administrative detention.

A report by Israeli NGO B'Tselem, which was based on the Israeli Prison Service statistics, read that over the last year, 29 Palestinians were taken into administrative detention every month, on average, and 37 were released.

The report added that in the past decade, the number of detainees held by Israel in a single month never fell below 150.

Israeli authorities released a former Palestinian prisoner, on Tuesday, who was detained on Monday, one day after he was officially released after 17 years of imprisonment.

Israeli authorities also expelled Mahmoud to the Jericho district for the entire period of the ordered ban.

It is noteworthy that Mahmoud was initially banned for three days from Issawiya neighborhood.
Minor among 21 Palestinians detained by Israeli forces

Israeli forces detained at least 21 Palestinians, including a minor, across the occupied West Bank during predawn raids on Tuesday.

In the northern West Bank district of Tubas, PPS said five Palestinians were detained. They were identified as Samer samih Suwafta, 39, Rayeq Sadeq Bisharat, and Bassem Deib Suwafta along with his sons Muhammad and Qasam.