Israeli soldiers abducted, on Tuesday at dawn, sixteen Palestinians from their homes in several parts of the occupied West Bank, the Palestinian Prisoners’ Society (PPS) has reported.

In Hebron, in southern West Bank, the soldiers abducted Zayed Met’eb, and his son Tha’er, in addition to Bilal Mohammad Kawazba.

In Qalqilia, in northern West Bank, the soldiers abducted one Palestinian, identified as Ibrahim Jal’oud.

These pre-dawn raids are a nightly occurrence in the West Bank, with Israeli forces invading towns and villages while the local residents are sleeping.

The Israeli troops then engage in a practice of breaking down doors, ransacking homes and grabbing young men and women from their beds as they lie sleeping.
Israeli Soldiers Abduct Six Palestinians In Jenin

Israeli soldiers abducted, on Tuesday at dawn, six young Palestinian men from their homes, in Jenin governorate, in the northern part of the occupied West Bank.

They added that the soldiers also invaded homes in the al-Hashimiyya town, west of Jenin, and abducted Ahmad Jawdat Jaradat.

The soldiers also abducted Aqabat Nafe’ Yahia, 28, from the al-Hashimiyya town, after storming a store in Barta’a town, southwest of Jenin, which is isolated and surrounded by the Annexation Wall.
18 feb 2019
Hamas condemns Israel's cut on PA tax money

Spokesman for Hamas movement Hazem Qasem on Monday said that the Israeli government's decision to deduct funds from the tax revenues transferred to the Palestinian Authority (PA) is a robbery of the Palestinian people's money.

Qasem said in a press statement that the PA "soft policies" toward the Israeli occupation's practices have encouraged Netanyahu's government to commit more crimes.

"It is regrettable that the Israeli move was preceded by the PA decision to cut the salaries of the families of Palestinian martyrs and prisoners in the Gaza Strip," he added.

Qasem said that the PA should respond to these Israeli practices by ending the security coordination with the Israeli army and lifting the sanctions imposed on the Gaza Strip.

What is more important, he continued to say, is that the PA stops its monopoly of the decision-making and abide by the signed reconciliation agreements.
Tension flares up as Israeli guards storm Megiddo jail

Tension and anger broke out on Sunday in Megiddo jail after Israeli prison guards stormed the Palestinian prisoners' rooms and kidnapped their representative Rabi' Abu al-Lil.

The Palestinian Detainees and Ex-Detainees Affairs Commission said in a press statement that the Israeli guards broke into section 6 at 5:00 am and forced Abu al-Lil out of his cell without allowing him to change his clothes or take any of his belongings.

The Palestinian prisoners in Megiddo jail responded to the attack by refusing to take their meals and informed the Israel Prison Service that they will escalate their protests if Abu al-Lil is not returned to his room.

The Detainees and Ex-Detainees Commission called on the international community to act immediately and put an end to the violence practiced against Palestinian prisoners which has been stepped up as the Israeli elections are approaching.
Elderly Palestinian assaulted, child kidnapped by Israeli soldiers

The Israeli occupation forces on Sunday evening attacked an elderly Palestinian man and kidnapped his son in the Old City of al-Khalil, in the southern occupied West Bank.

Israeli soldiers broke into the home of 65-year-old Mohamed Ekneibi, assaulted the latter, and kidnapped his 13-year-old child Amer.

At the same time, the occupation forces summoned the media chief at the Islamic Awqaf Department, Firas al-Dabes, to questioning on Monday, as he passed through a military checkpoint pitched near Shu’fat refugee camp, in occupied Jerusalem.
Israeli Soldiers Abduct Four Palestinians, Including One Woman, In Al-Aqsa 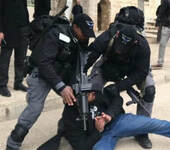 Israeli soldiers assaulted, Monday, many worshipers in the Al-Aqsa Mosque, in occupied Jerusalem, before abducting four Palestinians, including one woman.

Media sources said the soldiers assaulted several Muslim worshipers while trying to remove them from the holy site, and closed all gates leading to it. video

One of the abducted Palestinians has been identified as Sheikh Ra’ed Da’na.

They added that dozens of worshipers held noon prayers in Bab ar-Rahma area, to protest the closure of the Bab al-Rahma Gate, especially after the army closed it with chains, on Sunday at night. video

The soldiers resorted to the excessive use of force against the worshipers, including many women and children.
Israeli Forces Invade West Bank, Abduct 8, Including Two Children

The two children were abducted from Shu’fat neighborhood in East Jerusalem, from a street near their home. The two youth were identified as Yasser Quresh and Zein al-Dibis.

They were abducted by Israeli undercover forces dressed as civilians, who never identified themselves as police or soldiers before grabbing the boys and pushing them into their unmarked vehicle.

Only later were the parents of the two boys able to find out that it was Israeli forces who had abducted the children.

In Jenin District, in the northern part of the West Bank, Israeli forces on Monday abducted four young men.

Local sources told the Palestinian News agency Wafa that Israeli forces stormed the town of Arrabeh, south of Jenin, and abducted Hazem Mazen ‘Atari, after raiding his house and ransacking it.

In the same context, Israeli undercover forces abducted Omar Suleiman Sa’adi from the Jenin refugee camp after they ambushed him on the Arab-American University road. The soldiers were dressed as Palestinians and did not identify themselves as soldiers before they grabbed and kidnapped Omar.

Also in the Jenin District, in the town of Qabatiya, Israeli forces abducted Mohammad Adnan Nazzal and Ibrahim Zakarneh. The soldiers raided and searched their houses in Qabatiya, and pulled the men from their beds as they were sleeping to take them to an Israeli military base for interrogation and detention.

In the Nablus area, Israeli forces invaded the town of Aqaba, north of Tubas, and abducted a young man who was sleeping in his bed.

The director of the Palestinian Prisoner Society in Tubas, Mahmoud Sawafta, said that the Israeli forces abducted one young man identified as Adham Zayed al-Masri, after raiding the house of his family in the town.

And in Tulkarem District, also in the northern West Bank, Israeli forces abducted a young man from the Shuweika suburb north of Tulkarem.

The Prisoners’ Society in Tulkarem told the Wafa News Agency that the Israeli forces abducted Hamdan Marwan Adhailia, 30, after raiding his house and searching it.

These pre-dawn raids are a nightly occurrence in the West Bank, with Israeli forces invading towns and villages while the local residents are sleeping.

The Israeli troops then engage in a practice of breaking down doors, ransacking homes and grabbing young men and women from their beds as they lie sleeping.
17 feb 2019
Israel confiscates vehicle of disabled Palestinian

An Israeli court on Sunday decided to confiscate the vehicle of the disabled Palestinian ex-prisoner Adnan Hamarsha.

Hamarsha told the PIC reporter that the Israeli court decided to confiscate his car and ordered him to pay a fine of 70,000 NIS within a short period.

The Israeli occupation forces a few months ago detained Hamarsha and seized his car before they released him later.

Hamarsha is an ex-prisoner who had served over 15 years in Israeli jails.
Israeli settlers attack Palestinian shepherds, steel sheep

Local activist Mootaz Besharat said a horde of Israeli settlers attacked Palestinian shepherds as they grazed their sheep in al-Farisiya area, in the northern Jordan Valley.

The settlers stole sheep from the area. Israeli soldiers showed up at the scene to provide the settlers with a tight security shield.

Palestinian citizen Ahmed Abu Muhsen was detained for hours before he was summoned to questioning at an Israeli detention center.
Arbitrary abduction sweep by Israel army rocks occupied West Bank

A number of Palestinians were kidnapped by the Israeli occupation forces at daybreak Sunday in abduction sweeps launched across the West Bank.

The arrestees were dragged to an unidentified destination pending intensive questioning.

At the same time, three Palestinians from Bethlehem were summoned to interrogation by the occupation forces.

Overnight, Israeli soldiers chased down Palestinian anti-occupation youth in Azzoun town, east of Qalqilya, and closed off the main access roads to the area.

The occupation forces targeted the locals with randomly-unleashed spates of teargas canisters on claims that a home-made explosive device was hurled at Israeli patrols.

Flying checkpoints have also been set up along the thoroughfare between Azzoun, Qalqilya, and Azabet al-Tabib, where Palestinian civilians have been subjected to exhaustive inspection.
16 feb 2019
Israeli Soldiers Abduct Four Palestinians In Hebron And Ramallah

Israeli soldiers abducted, on Saturday at dawn, four Palestinians in Hebron and Ramallah governorates, in the southern and central parts of the occupied West Bank, after invading and searching their homes.

The soldiers also invaded many neighborhoods in Hebron city, and installed roadblocks at the entrance of Sa’ir town, northeast of Hebron, and Halhoul bridge area, north of Hebron, before stopping and searching cars, and interrogated many Palestinians while inspecting their ID cards.

Furthermore, the soldiers, stationed at the military roadblock on the road leading to Ni’lin town, stopped and searched cars and abducted two young men from Beit Rima town, west of Ramallah.

The Israeli court of al-Maskoubiya extended on Thursday the arrest of Asem al-Barghouthi, 33, for the fifth consecutive time, rights sources revealed.

The Palestinian Prisoners Society (PPS) affirmed that Asem’s remand was extended for the fifth time since his arrest in January 2019 pending investigation.

Following his arrest, a large-scale arrest campaign was carried out in his hometown, the Kobar village. His father, mother, two brothers were among the detainees.