Several Israeli military vehicles invaded, on Friday at dawn, the town of Azzoun, east of the northern West Bank city of Qalqilia, detained fifteen Palestinians, and caused damage to homes while violently searching them.

Media sources in Qalqilia said the soldiers surrounded the town, during early dawn hours, before invading it and breaking into dozens of homes.

The soldiers initiated violent searches of the invaded homes, and destroyed the floors of some of them.

The army detained at least fifteen young Palestinian men, and interrogated them while inspecting their ID cards.

At least seven Palestinians were kidnapped by the Israeli occupation forces (IOF) from the West Bank provinces of al-Khalil and Qalqilya at daybreak Friday.

According to a PIC news reporter, the IOF kidnapped three Palestinian boys following assaults on al-Khalil’s towns of al-Dhahriya, Dura, and al-Samou’.

The three arrestees are named as Ayed Amr, Ali Mteir, and Sadam al-Talahma, who were all kidnapped from their own family homes in Dura town.

The IOF further wreaked havoc on civilian homes in al-Dhahriya and Samou’ and sealed off southern al-Khalil with military checkpoints, where Palestinian vehicles and passengers have been subjected to intensive inspection.

At the same time, four Palestinians—Omar Saleem, Waleed Sweidan, Saher Majd, and Ramez Shlou—were kidnapped by the IOF from Qalqilya’s eastern town of Azzoun, in the northern West Bank.

The IOF broke into 15 Palestinian homes in the area, sparking panic among women and children.

The sweep comes shortly after the occupation army claimed that a settler vehicle was subjected to a shooting attack on Thursday evening.
Hamas leader transferred to isolated cell in Israeli jail

Speaking with PIC, Abu Tabana’s wife, Umm Anas, said she was updated on a decision by the IPS to transfer her husband to solitary confinement in the Israeli Megiddo prison.

She added that her husband was kidnapped by the Israeli occupation forces from his own family home in al-Zaytoun suburb in al-Khalil and was transferred to administrative detention, with neither charge nor trial.

The breadwinner of a 12-member family, activist Abu Tabana has spent a total of 10 years in administrative detention in Israeli jails.

The Hamas leader earned a PhD in Islamic History and worked as a junior lecturer at the Quds Open University.
Lawful body warns of deliberate medical negligence against prisoners

Detainees and Ex-detainees committee warned of the continuation of Israeli deliberate policy of medical negligence against Palestinian sick prisoners who are held at Ramleh prison’s hospital. 19 Sick captives including critical cases are held at Ramleh hospital.

A report issued by the committee showed that Palestinian detainees in Israeli jails are subjected to a series of punitive practices such as deprivation of family visitation, prohibiting the entry of heavy clothes and poor food service.

Lawyer of the committee Kareem Ajweh said that the Palestinian sick captive Mohammad Brash, who is from al-Amari refugee camp and serves a sentence to life imprisonment, has lost his vision in the left eye and had his left leg cut off.
26 jan 2017
Army Injures Two Palestinians, Abduct Three, In Nablus And One Near Bethlehem

Israeli soldiers shot and injured, earlier Thursday, two Palestinian teenagers in the northern West Bank city of Nablus, during clashes that erupted after several army vehicles invaded it. The soldiers also abducted three Palestinians in Nablus, and one near Bethlehem.

Media sources said the Israeli army vehicles invaded several areas in Nablus, leading to clashes, mainly in al-Eman and Mo’ta Streets, in the city, in addition to ‘Askar refugee camp.

Medical sources in Nablus said one Palestinian, identified as Khaled Abdul-Qader Sharqawi, 17, was shot with a rubber-coated steel bullet in his neck, while Ahmad Jihad Abu Hashi, 19, was shot with a similar round in his head.

During the invasion, the soldiers broke into and violently searched many homes, and abducted three Palestinians identified as Husam Abu Ni’ma, from Askar refugee camp, Maher Taher Salah, from Mo’ta Street, and Wael Nael Bishtawi, from al-Eman Street.

Clashes also took place in the Deheishe refugee camp, south of Bethlehem, after dozens of soldiers invaded it.

In related news, the army installed several roadblocks at main junctions leading to al-Hajeriyya town, and al-Fawwar refugee camp, Wad al-Qomra, east of Doura town, in the southern West Bank district of Hebron, before stopping and searching dozens of cars, and investigated the ID cards of the passengers, while interrogating them.

Dozens of army vehicles were also deployed at junctions and roads leading to several villages and towns, south of Hebron city.
IOF arrests Palestinian man at Huwara checkpoint in Nablus

Israeli Occupation Forces (IOF) at afternoon on Thursday arrested a Palestinian young man while he was passing through an Israeli military checkpoint in Huwara town south of Nablus.

Earlier on Thursday, the IOF troops stormed al-Sharqawi’s home in the camp, searched it thoroughly and wreaked havoc inside. As he was not at home, the forces told his father to make his son turn himself in to Israeli authorities.
Palestinian prisoner denied family visits

Family sources affirmed that Israeli authorities denied Tawes family visits for security reasons although he has been held in Israeli jails for 32 years.

Tawes family members were allowed to visit him once per year; however, his sister and aunt were recently prevented from meeting him despite having permits after heading to Raymond prison under the security pretext.

Tawes was arrested in Oct. 1985 and sentenced to life.

Spokesman Fadi Farah of Jordan's National Committee for Prisoners in Israel pointed out that Israeli forces arrested Hweiti in 2015 during his visit to the West Bank.

He was later sentenced to two years imprisonment, he added.

Farah called on Jordanian authorities to shed more light on prisoners’ issue and to facilitate visits to them.
Armed clashes erupt in Jenin camp as arrests reported

Armed clashes broke out at dawn Thursday in Jenin refugee camp when Israeli Occupation Forces (IOF) stormed the camp in large numbers and carried out arrests.

Local sources told the PIC reporter that dozens of Israeli soldiers stormed the camp at 3 a.m. which led to the outbreak of armed clashes with local resistance fighters.

Israeli forces opened heavy fire at Palestinian houses while explosions were heard from time to time, the sources added.

The two brothers Mohamed and Ahmed Abu Khalifa, who spent more than ten years in Israeli jails for being affiliated to Hamas Movement, were arrested after Israeli forces broke into their houses.

Israel’s Salem military court on Wednesday extended the detention of 17-year-old Ahmed Issa, from Jenin, until next Monday and refused a request to release him due to his injury.

According to a lawyer from the Palestinian Prisoner Society (PPS), Issa is still in Ha'emek hospital receiving treatment for injuries he sustained after an Israeli military jeep ran over him in January 3rd.

The teenager has not attended any court hearing because of his bad health condition.
Army Abducts Nine Palestinians In The West Bank 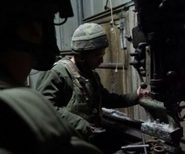 Israeli soldiers abducted, on Thursday at dawn, at least nine Palestinians, in different parts of the occupied West Bank. The army is claiming that the soldiers also located a weapon’s manufacturing workshop in Hebron.

An Israeli army spokesperson said the soldiers initiated an extensive campaign in the southern West Bank district of Hebron, and located a workshop containing eight lathe machines that were reportedly used for manufacturing weapons.

He added that the invasion was part of what he called “the ongoing battles against guns and weapons’ manufacturing workshops.”

The soldiers conducted extensive searches of homes, in different parts of the occupied West Bank, and abducted nine Palestinians from their homes.