3 july 2016
PFLP: The PA hinders the internationalization of prisoners’ issue

Popular Front for the Liberation of Palestine (PFLP) accused the Palestinian Authority (PA) Ministry of Foreign Affairs of hindering popular efforts for internationalizing the issue of Palestinian prisoners in Israeli jails especially at the UN.

Mohammad al-Khatib, PFLP member and coordinator of “Samedoun” Network in Europe, said in a press statement that the PA’s Minister of Foreign Affairs Riyad al-Malki had not sent any circulation to the embassies of Palestine on the issue of Palestinian prisoners who have been on hunger strike in Israeli jails for two weeks.

Khatib pointed out that the role by Detainees and Ex-detainees Committee in this regard is not enough. The Committee has been incapable to act due to its affiliation with the PA, he said.
Palestinian prisoner on 19th day of hunger strike in Israeli jail

Palestinian prisoner Bilal Kayed has been on an open-ended hunger strike for 19 days running in protest at being held in administrative detention, without trial, right after the end of his 14-year sentence in Israeli jails.

Supporters of the Popular Front for the Liberation of Palestine (PFLP) called for mobilizing mass solidarity rallies with hunger-striker Kayed until he is released from jail.

A series of rallies has been staged across the occupied West Bank to push for releasing prisoner Kayed. Hunger-striking detainee Kayed, from Asira al-Shamaliya, in northern Nablus, was kidnapped by the Israeli occupation forces in November 2001 against the backdrop of his affiliation with the PFLP’s armed wing and his involvement in anti-occupation attacks against Israeli targets.

Kayed has reportedly been subjected to solitary confinement due to his anti-occupation activism in Israeli lock-ups.
Israeli Soldiers Kidnap Ten Palestinians, Including A Journalist, In Jerusalem

Israeli soldiers have kidnapped, overnight and at dawn Sunday, at least ten Palestinians, during massive invasions and searches of homes; nine of the kidnapped are from the Old City, and one from Silwan town.

The Israeli Radio said quoted army sources claiming that nine of the kidnapped are suspected of involvement in hurling stones on Israeli police and army vehicles around the Al-Aqsa Mosque, in addition to Silwan town and Bab Al-‘Amoud.

WAFA added that ‘Arafa was first ordered to head to a security center for interrogation, on Saturday evening, and was released a few hours later, yet, the army invaded his home and kidnapped him. 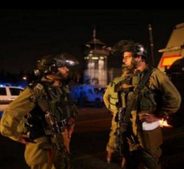 Israeli soldiers invaded, on Sunday at dawn, several districts in the occupied West Bank, broke into and searched many homes, and kidnapped at least eight Palestinians, five of them from the southern West Bank district of Hebron.

The soldiers also invaded Bani Neim town, east of Hebron, searched a few homes and kidnapped Lara Nasser Tarayra, 22, the sister of Mohammad Tarayra, 17, who was killed after he stabbed and killed a 13-year-old Israeli child in Keryat Arba’ colony, earlier on Thursday, before he was shot dead.

In addition, the soldiers kidnapped an elderly Palestinian man, identified as retired Lieutenant Khaled Mohammad al-Madhoun, 61, after invading and searching his home in Tal Romeida neighborhood, in Hebron.

Furthermore, a Palestinian worker, identified as Ehab Husam ‘Alawna, from Jaba’ town, south of the northern West Bank city of Jenin, was kidnapped at dawn while working in Jerusalem.

On Saturday at night, several Palestinians were injured after a number of extremist Israeli settlers, living in illegal colonies in the northern West Bank district of Nablus, attacked Palestinian cars and hurled stones on them, in areas in the southern and western parts of Nablus.
Israeli Soldiers Detain Four Children Near Jenin 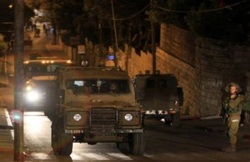 Israeli soldiers detained, on Saturday at night, four Palestinian children at a military roadblock the soldiers installed on the main entrance of their village, Zabbouba, west of the West Bank city of Jenin.

Eyewitnesses said the soldiers installed a sudden roadblock, closing the main road leading to Zabbouba, stopped and searched dozens of cars, examined the ID cards of the passengers and kidnapped four children.

The children, Dia Fathi Jaradat, Jamal Jaber al-‘Ater, Mohammad Abdul-Rahman Jamal and Sami Bassem Jamal, were detained and interrogated for more than two hours before the soldiers released them.

In related news, the soldiers installed a roadblock on the Jenin-Jaffa road, at the main junction of Sielet al-Harethiyya town, northwest of Jenin, before stopping and searching dozens of cars, and interrogated many Palestinians while inspecting their ID cards.
2 july 2016
Detainee Kayed Continues Hunger Strike, Refuses Deportation

Palestinian detainee Bilal Kayed is ongoing with the hunger strike demanding an end to his illegal Administrative Detention that was imposed on him after he already served his 14.5-year sentence. The detainee refused an Israeli “offer” for his release in exchange for deporting him, instead of sending him back home.

The Palestinian Detainees’ Committee has reported that the Israeli security services offered to release Kayed, who started his strike on June 14, 2016, if he agrees to be exiled instead of being allowed back home.

It added that the detainee, currently held in solitary confinement in Ohalei Kedar prison, insists on his demand to be unconditionally freed, especially since he already served his imprisonment term, and is being held under arbitrary Administrative Detention orders, without charges or trial.

Israeli security officers and the prison security services met with Kayed, who told them that he will not accept to be deported, even if it means striking to death, and added that he is willing to be sent to court.

The detainee told a lawyer of the Committee that the decision to keep him imprisoned without charges, and the allegations of secret information, are just fabrications and illegal maneuvers that violate International Law and basic principles of human rights.

“If they have anything against me as they claim, then they need to send me to court,” Kayed said, “But it is all lies and manipulations; their alleged secret information does not exist. Every detainee has the right to a fair trial.”

Kayed is a member of the Popular Front for the Liberation of Palestine (DFLP). Many detainees, also PFLP members, said they would declare a hunger strike, that will likely expand.

The detainees conducted various solidarity moves, including hunger strikes, but suspended them until July 7th, awaiting the outcome of talks between Kayed and the prison administration, and said they will escalate their protests and strikes, should Israel keep him held under these arbitrary orders.

One June 24th, the PFLP announced that Israeli authorities transferred dozens of PFLP prisoners, who declared a hunger strike in solidarity with Keyed from Megiddo prison to other Israeli prisons. 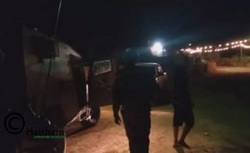 The sources added that the soldiers also placed many sand hills and concrete blocks, sealing the main entrances of Wad ash-Shajna, Deir Razeh, Karma, Beit ‘Amra, al-Harayeq and Zeef, south of Hebron, in addition to Beit ‘Einoun and Bani Neim, east of the city.

In addition, the soldiers invaded several neighborhoods in Hebron city, in addition to the towns of ath-Thaheriyya, Yatta, Sammoa’ and Sa’ir, before breaking into dozens of homes and stores, and violently searched them.

The soldiers interrogated many Palestinians while searching their homes and property, and confiscated several surveillance tapes.
Israeli court banishes Palestinians from Aqsa Mosque, Turks from J'lem

An Israeli court on Friday decided to give 10 Palestinian detainees conditional release and expel three Turkish tourists from Jerusalem.

According to the Palestinian Prisoner Society, the court ordered eight detainees to pay financial penalties and stay away from the Aqsa Mosque until July 22.

The court also deported three Turkish tourists from Jerusalem at the pretext of raising a Palestinian flag at the Aqsa Mosque. In another context, an Israeli court in Jerusalem extended the detention of two Palestinian minors after the Israeli prosecutor prepared an indictment against them.

The detainees are Yousef Hazini and Khaled al-Sokhen.
1 july 2016
Minor girl kidnapped by IOF hours after another was shot dead

The Israeli occupation forces (IOF) on Friday kidnapped a Palestinian girl near the Ibrahimi Mosque, in al-Khalil, allegedly as she attempted to carry out an anti-occupation stabbing attack.

Israeli policemen claimed a 15-year-old Palestinian girl was arrested at a military checkpoint near the Ibrahimi Mosque for holding a knife. The same sources alleged that the girl raised suspicions as she approached Israeli border cops deployed in the area. 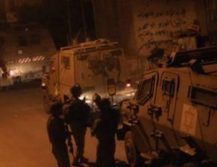 Israeli soldiers invaded, Friday, the town of Jaba’, south of the northern West Bank city of Jenin, stormed and searched a few homes, and kidnapped a young Palestinian man.

Local sources said the soldiers kidnapped Bassel Ahmad Abbas, in his twenties, after forcing him and his family from their home, and violently searching it.

The soldiers also searched many homes in the town, attacked and interrogated many residents, especially at dawn, and during early-morning hours.

Palestinian medical sources have reported, Friday, that at least ten Palestinians suffered mild injuries, and some suffered the effects of tear gas inhalation, during clashes with Israeli soldiers manning the Qalandia terminal, north of occupied Jerusalem.

The clashes took place following extended delays and searches on the roadblock, in addition to various provocative military acts against many Palestinians trying to cross.

The wounded Palestinians were moved to a number of hospitals in Ramallah, in the central West Bank.

The Palestinians, who were waiting at the roadblock for extended periods, and subjected to provocations by the soldiers, are from different areas of the central and northern parts of the West Bank.

They obtained permits to enter Jerusalem to pray in the Al-Aqsa Mosque, on the last Friday of the holy Muslim month of Ramadan.

On Friday morning, the soldiers kidnapped a young man, identified as Mohammad Samir Abu Zeina, 20, after stopping him on a sudden roadblock near the al-Ram town and the Qalandia refugee camp, while he was on his way to the Al-Aqsa Mosque.
Israeli Soldiers Kidnap At Least Eight Palestinians In Hebron

The Palestinian Prisoners Society (PPS) has reported that Israeli soldiers have kidnapped, on Friday at dawn, at least eight Palestinians, including former political prisoners and political analysts, in the southern West Bank city of Hebron, and Bani Neim nearby town. On Thursday evening, the soldiers kidnapped two Palestinians in Nablus.

In Hebron city, the soldiers kidnapped two political analysts, identified as Hisham Hmeidan Sharabati and Dr. Firas al-Qawasmi, in addition to a young man, identified as Samer al-Jo’ba, after storming their homes and searching them, causing property damage.

The soldiers also kidnapped a former political prisoner, identified as Mos’ab Zghayyar, as he was heading to Al-Aqsa Mosque for Friday prayers, and later invaded his family’s home, searched it, and confiscated his laptop.

In Bani Neim town, east of Hebron, the soldiers invaded and ransacked dozens of homes, including the homes of Mohammad Tarayra, 17, who was killed after he stabbed and killed a 13-year-old Israeli child in Keryat Arba’ colony, earlier on Thursday, before he was shot dead, and Majd Abdullah al-Khdour, 19, who was killed by the army on Friday June 25th, and interrogated their families.

The soldiers also kidnapped a number of Palestinians, after searching their homes, in the town. Four of them have been identified as Waleed Lafi Hmeidat, Malek Harbi Hmeidat, Odai Khaled Hmeidat and Nidal Mazin Ballout.

Medical sources said several Palestinians suffered the effects of tear gas inhalation after the soldiers fired many gas bombs, and concussion grenades, in a number of neighborhoods, after a number of local youngsters hurled stones at the invading military vehicles.

In addition, several army vehicles invaded Awarta town, east of the northern part West Bank city of Nablus, before breaking into the home of a student of the Najah University Nadi Sharab, and violently searching it. The Palestinian was kidnapped on Thursday evening on a military roadblock east of Jaba’ town, northeast of Jerusalem.

On Thursday evening, the soldiers kidnapped Mohammad As’ad Baddad, 42, after stopping him at the Za’tara military roadblock, south of Nablus. Baddad is a Palestinian Civil Defense employee and was returning home from Ramallah.
Page:  2 - 1
Powered by