Hedmi, 47, pointed out that the order was issued on June 14 and it was delivered only on Monday, July 11 "in order not to give him the chance to appeal against it", he said.

It is the second time in which he was issued a ban from travel order, he highlighted.

Hedmi was held in Israeli jails on three past occasions in which he served three years. He was also deported away from the Aqsa Mosque for 15 days.
Two life sentences, 30 years against Palestinian prisoner

Israeli military court of Salem Tuesday issued two life sentences and additional 30 years against prisoner Ragheb Eleiwi from Nablus city on the charge of belonging to al-Qassam Brigades and carrying out shooting attacks resulting in killing settlers and injuring others.

Eleiwi’s brother told the PIC reporter that Eleiwi was brought to court while being handcuffed and feet shackled amid tightened security measures.

His family members, who attended the trial, were banned from talking to him, he pointed out. Salem court on June 22 issued a similar sentence against four Palestinian detainees of the Itamar cell and adjourned the trials of another two prisoners after indicting them of carrying out a shooting attack near Itamar settlement.

An Israeli settler along with his wife were killed in the attack which was carried out in response to the Israeli crime of burning al-Dawabshe Palestinian family alive in Doma town two months earlier.

Israeli forces razed the home of captive Eleiwi and the homes of the four members of Itamar cell. The implementation of the demolition orders of the two other captives were adjourned.
IOA to release the youngest Palestinian female prisoner

Nuran was arrested on April 13, 2016 at Bethlehem checkpoint while heading to al-Aqsa Mosque for allegedly trying to carrying out a stabbing attack.

Nuran’s two brothers, Mohamed and Mahmoud, are administratively held in Israeli jails. They both launched an open hunger strike several days ago in protest against their administrative detention.

Nuran’s father was assassinated by Israeli forces in 2008 for allegedly being involved in anti-occupation attacks.
Ofer court extends administrative detention of Thaer Halahela

The military court in Ofer has sanctioned, for the fifth consecutive time, the administrative detention of Palestinian prisoner Thaer Halahela for four months.

According to the Palestinian Prisoner Society, prisoner Halahela has been in administrative detention since August 2014 and thus is considered one of the oldest internee being held with no trial or indictment in Israeli jails.

The prisoner had already spent different prison terms totaling 12 years, some of them administratively.

He was one of those prisoners who went on hunger strike for 78 days in 1012 in protest at the administrative detention policy.
Israeli army summonses deceased infant for interrogation

It never crossed a Palestinian father's mind that his two-week-old baby child who passed away 23 years ago would be wanted one day by the Israeli occupation army and its intelligence.

This happened at dawn Monday when an Israeli officer handed Mohamed Buairat, from Kafr Malik village in Ramallah, a summons for interrogation issued against his deceased infant, Jihad.

The father said that he and his family were awakened by soldiers violently knocking on the door of the house when the officer in charge told them that their child Jihad was wanted for interrogation by the military intelligence.

The father and his family members were surprised to hear that and tried to convince the officer that Jihad was their baby child who died over 20 years ago.

The officer, then, asked all members of the family to let him see their ID cards before he photographed the one that belongs to the father together with the summons to confirm that the notice was handed to the family.
Prisoner Balboul on hunger strike for the fifth day

The lawyer of Detainees and Ex-detainees Committee, Tariq Barghout, revealed on Monday that captive Mahmoud al-Balboul started an open hunger strike five days ago against issuing him an administrative detention order for 6 months.

Israeli forces arrested detainee Balboul, from Bethlehem, and held him in Ofer jail along with his brother Mohammad for alleged incitement on Facebook.

She was sentenced to 4.5 months on a similar charge. The three siblings are children of martyr Ahmad al-Balboul, who was assassinated by Israeli Special Forces in Bethlehem on March 12, 2008.
Army Kidnap Six Palestinians On Twelfth Day Of Hebron Siege 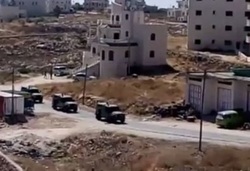 The Israeli military continued its siege on the southern West Bank district of Hebron, and invasions of homes, for the twelfth consecutive day, and kidnapped at least six Palestinians, in addition to occupying rooftops and confiscating surveillance tapes.

The Hebron office of the Palestinian Prisoners Society (PPS) has reported that the soldiers invaded Doura town, southeast of Hebron, before breaking into dozens of homes and searching them, and kidnapped six Palestinians.

It said the kidnapped are Khaled Ahmad al-Faqeeh, his wife Taghreed Jabara, his son Mohammad, and his brother Mohammad, in addition to Amir Abdul-Hameed Mitleq, 22.

The towns of Sa’ir, Shiokh, Bani Neim and Yatta remained completely besieged for the twelfth consecutive days, while the soldiers also installed concrete blocks on the entrances of various villages, towns and refugee camps, in the Hebron city.
19 Palestinians arrested during clashes across West Bank, O.J’lem

19 Palestinians were arrested and two others were injured during the campaign. The clashes broke out when hundreds of Israeli settlers stormed under heavy military protection Youssef tomb east of Nablus.

In their turn, Israeli forces fired a hail of rubber bullets and teargas bombs. Ten Palestinians were injured including five who choked on teargas.

Several local homes were also stormed and searched during the raid. Similar clashes were reported in Qabatia town after being stormed by Israeli forces. In Qalqilia, violent clashes broke out when Israeli forces stormed its neighborhoods amid heavy firing of teargas bombs and rubber bullets.

Seven locals were arrested during the confrontations. A young man suffered rubber bullet injury in his foot while several others suffered from effects of teargas inhalation.

In al-Khalil, Israeli forces stormed overnight and at dawn today several towns and villages which led to the outbreak of clashes with local youths.

At least two locals were shot and injured during the clashes, while dozens others suffered from effects of teargas inhalation. Israeli forces also intensified their presence in Sa'ir town, which led to the outbreak of clashes at the main entrances to the town.

Similar raids and arrests were carried out in Dura town, west of the al-Khalil. Local homes and a mosque were stormed during the campaign under the pretext of looking for “wanted” persons.

A whole family, a husband, his son, and wife were arrested from their house in Dura and taken to an unknown detention center. Another young man was arrested during the campaign, while a woman was injured when Israeli forces violently stormed her house. Two more arrests were carried out in occupied Jerusalem and Bethlehem.

The Qalqilia office of the Palestinian Prisoners Society (PPS) has reported that the soldiers invaded the city from various directions before storming into homes and searching them.

The soldiers also fired many gas bombs and concussion grenades during the invasion; no injuries were reported.

The soldiers stopped the three Palestinians while driving near Ibn Sina College in Huwwara, allegedly for driving and an unlicensed car, and abducted them.

Also in Nablus, dozens of Israeli colonists, and soldiers, invaded Qabr Yousef (Joseph Tomb), in Nablus, leading to clashes with local youths, who hurled stones and empty bottles on the military vehicles, while the soldiers fired live rounds and rubber-coated steel bullets.

The soldiers also hurled a concussion grenade at a Palestinian car with Israeli license plates, causing it to crash into another vehicle.

In addition, the soldiers invaded Burqin town, south of Jenin, and kidnapped a young man, identified as Mohammad Yousef Khaled Khallouf, 22, after storming his family home and searching it. The family said the soldiers detonated the front door of their property, before invading the property.

Furthermore, the soldiers invaded Qabatia town, and Mothallath ash-Shuhada village, near Jenin, and clashes with local youths who hurled stones on the invading army vehicles.
4-month sentence against Jerusalemite girl

The committee for the families of Jerusalemite prisoners said in a statement that the court indicted Bitar for her participation in student activities (book show) at the University of Jerusalem.

Student Bitar has been arrested in Israeli jails since April 19. She was transferred among several Israeli jails and is now held in al-Damon prison.
Shaul's relatives obstruct Palestinian visits to their prisoners

Family members of the Israeli soldier Aaron Shaul, who is reportedly detained by the Palestinian resistance in Gaza, along with dozens of their friends and supporters demonstrated before Nafha Israeli jail and obstructed the visit by families of dozens of Palestinian prisoners for four hours.

Quds Press quoted Bassam al-Majdalawi, head of Detainees and Ex-detainees Committee in Gaza, as saying that the Israeli demonstrators closed the road leading to Nafha jail on Monday.

They detained the families who came from Gaza Strip in buses from nine a.m. to 1 p.m. Majdalawi reported testimonials on the suffering of 72 families of Palestinian prisoners, mostly of women, elderly people and children, due to being detained in the severe hot weather.

The families managed to visit their prisoners after the intervention of the Red Cross and other authorities.

According to Palestinian media sources in 1948 Occupied Palestine, the demonstrators demanded banning Palestinians of visiting their imprisoned relatives and withdrawing the canteen and TVs from prisoners’ sections.

They called for withdrawing all privileges given to Palestinian prisoners’ in Israeli jails unless Israeli soldiers have the same services where they are held at Hamas in Gaza.