The soldiers abducted the workers, after chasing some of them, and moved them to several detention and interrogation centers.

The Israeli army said that the arrest of the Palestinian workers is part of “a campaign aimed at preventing them from entering the country without permits.”

The soldiers also abducted three Palestinians for “helping the workers in entering Israel without permits.”

In addition, the soldiers also confiscated 53 permits, carried by Palestinian workers who already obtained authorization from the Israeli side. The incidents took place near Etzion colony junction, and a military roadblock, west of Bethlehem.

On Sunday, A Palestinian worker from Bethlehem governorate, suffered fractures in both his legs, in addition to various cuts and bruises, after falling from a high altitude when Israeli soldiers chased him while he was trying to enter occupied East Jerusalem, where he works. 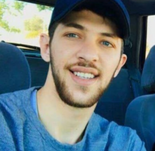 Israeli soldiers abducted, overnight and earlier on Sunday, at least eight Palestinians, during military invasions of homes and communities, in different parts of the occupied West Bank, including occupied East Jerusalem.

The soldiers invaded the town of al-‘Eesawiyya, in the center of occupied Jerusalem, abducted a young Palestinian man, identified as Mohammad Hussein Obeid, and took him to an interrogation center in the city.

The soldiers invaded Tulkarem refugee camp and Saida town from several directions, before storming him and violently searching them, while interrogated several Palestinians and inspecting their ID cards.

Israeli soldiers invaded, on Sunday at dawn, Beit Ummar town, north of Hebron in the southern part of the occupied West bank, and abducted two Palestinian teenagers, including a former political prisoner.

Mohammad Awad, a media activist in Hebron, said many army jeeps invaded the town at dawn, before the soldiers stormed several homes, and violently searched them.

The soldiers also installed roadblocks near Beit Ummar, and several areas in the Hebron governorate, before stopping and searching cars, and interrogated many Palestinians while inspecting their ID cards.
8 july 2017
IOF arrests Emad Abu al-Haija at military barrier in West Bank 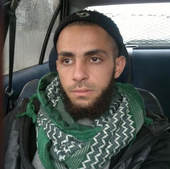 Local sources told the PIC reporter that IOF soldiers stopped the captive while he was passing through the checkpoint from Ramallah to Jenin and took him to an unknown destination.

The Israeli Prison Service (IPS) transferred the imprisoned lawyer Mohamed Allan to Ramla prison hospital after his serious health deterioration as he enters his 31st day of hunger strike in Israeli jails.

Family sources affirmed to the PIC reporter that Allan was moved to hospital last Thursday.

Allan’s father expressed deep concern over his son’s health condition especially that he still suffers from the effects of his previous hunger strike during which he refused food for 65 consecutive days in 2015.

Contacts are made with the Red Cross Society and the PA Prisoners and Ex-prisoners Committee to follow up his case, the father added.

He is expected to be brought to court within two days over incitement charges, he pointed out.

Allan started the hunger strike on June 8 after he was kidnapped from his home during an Israeli dawn raid in the West Bank village of Einabus.

According to Muhjat al-Quds Foundation, he is determined to continue his opened-ended hunger strike until he obtains his freedom.

Allan, 33, earlier conducted a 66-day hunger strike in 2015 when he was imprisoned without charge or trial under administrative detention, winning his release in November 2015.
Lawyer Allan enters day 31 of his hunger strike in Israeli jail

Palestinian lawyer Mohamed Allan has entered the 31st day of his hunger strike in an Israeli jail in protest at his detention with no charge and under harsh incarceration conditions.

According to Muhjat al-Quds Foundation, prisoner Allan is determined to continue his opened-ended hunger strike until he obtains his freedom.

Allan was transferred from Jalamah interrogation center to an isolation cell in Megiddo prison on the 10th day of his hunger strike, June 17.

He started the hunger strike on June 8 after he was kidnapped from his home during a dawn raid in the West Bank village of Einabus.
IOF breaks into several areas in West Bank

The Israeli occupation forces (IOF) raided on Saturday dawn a number of Palestinian houses in different areas of the occupied West Bank and interrogated their residents.

Violent confrontations broke out between Palestinian youths and the IOF soldiers as the latter stormed Beit Rima town in Ramallah province. The Israeli soldiers fired tear gas canisters and sound bombs while the Palestinian youths responded by throwing stones and empty bottles.

The IOF raided the house of Yousuf al-Najjar in Silwad town to the north of Ramallah city and confiscated a surveillance camera's recording device that belongs to him.

Meanwhile in Bethlehem, the IOF broke into a house for al-'Asa family in al-Ubeidiya town and handed their son Hamza al-'Asa an order to appear before the Israeli Intelligence.

In another development, the Israeli Jerusalem Municipality crews delivered on Saturday morning a demolition notice for the house of Faraj Siam located in Wadi Hilweh neighborhood in Silwan town under the pretext of building without a permit.

This came few days after his son Mohammed Siam was handed a similar demolition notice for his house.

An agricultural tractor was stolen by the IOF on Friday from a Palestinian land south of Tubas city.

Local sources reported that the Israeli forces took the tractor to the nearby al-Hamra checkpoint and detained its driver and other Palestinian workers for several hours.
7 july 2017
Palestinian youth kidnapped by Israeli forces from Occupied Jerusalem

A Palestinian youth was kidnapped by the Israeli occupation forces on Thursday evening on claims that he attacked an Israeli cop in Occupied Jerusalem.

The Israeli police spokeswoman, Luba Samri, said in a statement that an Israeli policeman was rushed to a hospital after he was attacked and injured by a Palestinian young man in Jerusalem’s Bab al-Amoud area.

News sources said the Palestinian youth was arrested after he refused to be searched by the occupation soldiers. He was dragged to an Israeli investigation center pending further questioning.
6 july 2017
Detained minors fined 42,000 shekels in Ofer jail last month

In a statement on Thursday, the committee pointed out that this number represents a remarkable increase compared to fines imposed on young prisoners in the previous month. Israeli occupation judiciary has recently been imposing too expensive fines on Palestinian prisoners in general as a punitive policy.

Around 35 detained minors were held in juveniles’ section in Ofer jail after being arrested from different locations last month. They all were subjected to different forms of torture during detention time or transfers to detention centers, military camps and settlements, the statement highlighted.
Palestinian lawyer starving for 29th day in Israeli lock-up

Palestinian lawyer Mohamed Allan has been on an open-ended hunger strike for 29 days running to protest arbitrary detention and mistreatment in Israeli jails.

According to Muhjat al-Quds Foundation, prisoner Allan, arrested by the occupation forces on June 8, has embarked on an open-ended hunger strike to press for his release.

An Israeli court ruled that Allan’s remand be extended until Thursday, July 6.

The prisoner’s mother said her son initiated the hunger strike to voice his firm rebuff of his arbitrary internment in Israeli jails.

In 2015, Allan had gone on a 65-day hunger strike and was released in November during the same year after he had served an administrative term of up to 12 months.
Israeli Soldiers Abduct Three Palestinians In Tulkarem

In related news, dozens of soldiers invaded Palestinian homes in Zawiya town, in Salfit governorate, in the central West Bank, before storming and ransacking many homes, and interrogated many residents while inspecting their ID cards.

Local sources identified owners of some of the invaded homes as Abdul-Salam Shqeir, and his sons, in addition to Sari Salim Shqeir and Nabil Sahqqour.

The soldiers interrogated many Palestinians, especially seniors, women and children, for more than two hours, the sources added. 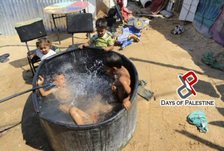 A celebration was organized in Bethlehem city, where the released detainees live, to welcome them and congratulate them on their release.
Ofer court extends detention order against blind prisoner for 2nd time

Israeli military court of Ofer extended on Wednesday the detention order against a Palestinian blind prisoner, Mohammad Eshtaiyeh, 24 from Nablus governorate, for the second time in a row.

The Israeli court ruled to extend the order until July 12 under the pretext of continuing the investigation.

The lawyer of Palestinian Prisoner Society, Abdunnaser al-Noubani, said that Israeli occupation authorities have been banning captive Eshtaiyeh, who suffered blindness since birth and his father is a martyr, from meeting with lawyers since he was arrested on June 19, 2016.
Israeli court sentences Jerusalemite youngster to 14 months 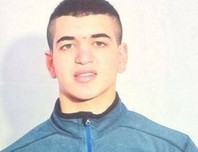 Israeli Central Court of Jerusalem on Wednesday issued an imprisonment sentence to 14 months against a Jerusalemite juvenile, Muayad Abu Mayaleh. He was charged with throwing stones and Molotov cocktails at Israeli forces.

The 17-year-old captive Abu Mayaleh was an ex-detainee who had previously served several months in Israeli jails. He was arrested from his home in Occupied Jerusalem on December 12, 2016.

The detained minor Abu Mayaleh was subjected to hash long-term investigation at the hands of Israeli intelligence apparatus. He is now held in Megiddo Israeli prison.
After Violent Searches Of Homes, Army Abducts Four Palestinians In Qalandia Refugee Camp

Israeli soldiers withdrew, on Wednesday morning, from the Qalandia refugee camp, north of occupied East Jerusalem, after abducting four young Palestinian men, following many hours of invasions and violent searches of dozens of homes, leading to clashes with local youths.

Many local youths hurled stones and empty bottles on the invading military vehicles, while the Israeli army also claimed that some Palestinian fighters exchanged fire with the soldiers.

The army fired dozens of live rounds, flares, gas bombs and concussion grenades after invading many alleys and homes in the refugee camp; no injuries were reported.

Furthermore, the soldiers closed the main road in front of the refugee camp, searched dozens of cars and refused to allow the Palestinian s through until the army concluded the invasions into Qalandia and Kufur Aqab.

The invasions into the homes, included homes belonging to families of Palestinians who were killed by the army in various previous incidents.
Including A Father And His Son, Israeli Soldiers Abduct Four Palestinians In Hebron And Tubas

Israeli soldiers abducted, on Wednesday at dawn, four Palestinians in the West Bank governorates of Hebron and Tubas, after invading their homes and searching them. The soldiers also confiscated solar panels, in the West Bank’s northern plains.

On Wednesday morning, the soldiers invaded Khirbet al-Himma village, in the West Bank’s Northern Plains, and confiscated solar panels providing the residents with electricity, and initiated searches for more panels, to remove them.

It is worth mentioning that the soldiers invaded the village, several days ago, and took pictures of the solar panels, and the surrounding areas.
Israeli Soldiers Abduct Seven Palestinians In Nablus

Israeli soldiers invaded, on Wednesday at dawn, several Palestinian communities in the northern West Bank governorate of Nablus, stormed and violently searched a number of homes, and stores, and abducted seven Palestinians.

The army stopped and searched their car, and detained them after locating a hunting rifle with them.
Page:  3 - 2 - 1
Powered by