Local sources told Quds Press that the family of the detained girl, who has a brother imprisoned in Israeli jails, affirmed that their daughter was arrested under the pretext of not carrying her ID.

In another context, Israeli Special Forces opened gunfire at a Palestinian car at the southern entrance of al-Khalil city in a bid to arrest the youth driving it, but he managed to escape the scene.
Shin Bet releases Sheikh Khatib after interrogating him on Aqsa

The Shin Bet, Israel’s internal intelligence, released Sheikh Kamal al-Khatib, deputy head of the outlawed Islamic Movement in the 1948 occupied lands, after interrogating him for several hours last Thursday night about his position on the Aqsa Mosque.

According to his lawyer, Sheikh Khatib refused to sign a pledge accusing him of making remarks that incite violence on social media.

Sheikh Khatib also did not yield to the officer’s threat to keep him in detention and bring him to trial tomorrow and insisted on not signing any paper.

After he left the police station, Sheikh Khatib said that a Shin Bet officer questioned him about social media remarks he made a few days ago about his condemnation of the recent Israeli measures at the Aqsa Mosque in Occupied Jerusalem.
21 july 2017
IOF storms martyr’s home, arrests old man in Bethlehem

Israeli Occupation Forces (IOF) stormed at dawn Friday the home of martyr Mohammad al-Tnouh in Taqoa town south of Bethlehem. The soldiers searched the home, subjected the family to field investigation and threatened to impose penalties on them.

The 24-year-old slain Tnouh was gunned down by Israeli soldiers Thursday morning under the claim of attempting to carry out an anti-occupation stabbing attack. His body is still detained by the IOF.

IOF troops also raided the home of head of Taqoa’s council and handed him a memo threatening to impose punitive measures against the inhabitants if they did not stop throwing stones at settlers and IOF soldiers.

Israeli forces also rounded up at dawn the 60-year-old man, Khalil al-Moti, after breaking into his home in Hindaza area east of Bethlehem. He was arrested two months ago and released on bail.
98 Palestinian workmen arrested last week in Israel

The Israeli police on Thursday said they arrested 98 Palestinian workmen recently inside Israel (the 1948 occupied land) at the pretext they had no entry or work permits.

A spokeswoman said that those workmen were detained last week, adding that 44 of them are still in police custody and the others were released and sent back to Palestinian areas.

She also said that 21 shops had been closed by the Israeli police since 2016 for employing undocumented Palestinians.

The phenomenon of West Bank workers in Israel resulted from Israel’s prolonged occupation of their territories that prevented the Palestinians from having an independent economy and made their living conditions very difficult.
20 july 2017
18 Palestinians arrested as tension reaches new heights

The Israeli Occupation Forces (IOF) detained 18 Palestinians during a pre-dawn raid and search campaign throughout the West Bank and occupied Jerusalem.

At least six Palestinian youths were detained as Israeli police stormed Issawiya town in occupied Jerusalem, while two others were arrested from the nearby town of Abu Dis.

A young man was also rounded up from Shufat refugee camp in the occupied city.

In Jenin, IOF stormed Qabatia town south of the city and arrested a local youngster from his family house before taking him to unknown detention center.

Also in Jenin, two youths were stopped and arrested at a military checkpoint erected at the entrance to Yamun town west of the city.

Two more arrests were carried out north of al-Khalil after Israeli forces claimed they discovered a workshop used to manufacture weapons.

A Palestinian was also arrested in Saida, while two others were kidnapped from Salfit and Qalqilia.

In Tubas, at least one young man was detained during an Israeli raid into Tamun town, south of the city.

Meanwhile, the Israeli army claimed that one of its soldier was injured as clashes broke out in Jalazoun refugee camp with Palestinian protesters.

Tensions are still high in the occupied Palestinian territories after Israel tightened restrictions on Palestinians’ access into al-Aqsa Mosque.
Israeli Soldiers Abduct Six Palestinians In Hebron, One Near Jenin

Israeli soldiers invaded, on Thursday at dawn, several areas in the southern West Bank governorate of Hebron, and Jenin governorate, in northern West Bank, searched many homes and workshops, and abducted six Palestinians.

The Hebron office of the Palestinian Prisoners’ Society (PPS) said the soldiers invaded many neighborhoods in the city, searched and ransacked homes, and abducted a child, identified as Yousef Mustafa Hajahja, 14 years of age, from the Old City.

Another Palestinian, identified as Ibrahim al-Husseini, was abducted from his home in the al-Fawwar refugee camp, south of Hebron, while the soldiers also illegally confiscated mobile phones and computers from his home.

The Israeli army said its soldiers managed to locate weapons and combat materials, during searches in Yatta and Bani Neim towns, and in Hebron city.

The army claimed locating a lathe machine, used for manufacturing homemade weapons, and ammunition, in Doura town, north of Hebron, in addition to locating M1 rifle, in Bani Neim town east of Hebron.

Mother of two Palestinian prisoners was arrested on Wednesday by the Israeli occupation forces (IOF) while visiting her sons in an Israeli jail.

The Palestinian Prisoner Society said in a statement that Hanaa Hamada was arrested during her visit to her sons Uday and Qusay Hamada in Gilboa prison.

According to the Society, Uday and Qusay, who are from Jenin, had received two-year and two-year-and-a-half sentences respectively.

It affirmed that a big number of families are barred from visiting their sons in Israeli jails, and even those allowed are subjected to humiliating searches each visit.

The IOF arrested 11 Palestinians from the occupied West Bank at dawn Wednesday for allegedly participating in popular resistance activities against the Israeli army and settlers.
Israeli police violently attack worshipers at Bab al-Asbat

Jerusalemite worshipers were assaulted on Wednesday by the Israeli police after performing noon prayer at Bab al-Asbat outside al-Aqsa Mosque in protest at the metal detectors installed at the entrances of the site.

The PIC reporter said that worshipers were violently attacked and showered with tear gas canisters.

Two worshipers were severely beaten before being arrested and transferred to an Israeli detention center in the Old City of Jerusalem.

In a statement on Tuesday, the commission said that the Israeli prosecution requested 25-year prison sentence for 16-year-old Mohamed Obeidat, from Occupied Jerusalem. He has been in detention since May 20, 2016.

It emphasized that such insane prison sentences reflect the extremism of the Israeli justice system and its participation in suppressing the Palestinian people.
IPS transfers dozens of Negev jail inmates to other sections

Israeli prison soldiers on Tuesday stormed one of the Negev prison’s sections, assaulted prisoners and ransacked their cells before transferring them to other sections.

According to Asra Media Center, a prison intervention squad raided section 4 of the prison and transferred all its 120 inmates to sections 3 and 10, with no stated reason.

The Israeli prison service (IPS) recently intensified its raids on cells of Palestinian prisoners and transferred many of them to other jails or sections in order to create a state of psychological instability and confusion among them.

In a separate development, the IPS decided to open new sections for Palestinian minors after recent arrests among them caused severe overcrowding in all juvenile sections of Megiddo prison.

According to the Palestinian Commission for Detainees’ and Ex-Detainees’ Affairs, the IPS will start to transfer Palestinian children from Megiddo jail to a new section to be opened in Ofer prison.
PPS: “Israeli Soldiers Abduct Seven Palestinians In Bethlehem, Nablus And Jenin”

Israeli soldiers abducted, earlier Wednesday, seven Palestinians from various parts of the West Bank governorates of Bethlehem, Nablus and Jenin, including two who were abducted on military roadblocks.

Also in Nablus, the soldiers abducted Moath Mahmoud Abu Doqqa, 19, from Ramallah, after stopping him at a military roadblock near Yitzhar illegal colony, built on Palestinian lands, south of Nablus.

In addition, the soldiers abducted Osama Nasser Salah, 21, and a former political prisoner, identified as Mohammad Abdul-Ghani Souqi, 33, after stopping them at a sudden military roadblock on the Nablus-Ramallah road.

The soldiers were also heavily deployed on the Jenin governorate, in addition to installing sudden roadblocks, before stopping dozens of Palestinian cars and searching them while inspecting the ID cards of the passengers.
Israeli Soldiers Abduct Three Palestinians In Hebron 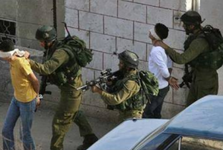 The Hebron office of the Palestinian Prisoners’ Society (PPS) said the soldiers broke into and searched a few homes in the city, interrogated many Palestinians, and abducted two young men, identified as Salim Rajabi and Mohammad Rajabi.

The soldiers also invaded the family home of Ra’fat Harbawi, 29, who was killed by the army on Tuesday afternoon, and ransacked the property. The invasion into the home was one of many similar attacks in less than 24 hours.

In related news, the soldiers installed roadblocks on main roads leading to many nearby villages and towns, stopped and searched dozens of cars, and interrogated many Palestinians while inspecting their ID cards.
Army Abducts Three Palestinians In Ramallah

Israeli soldiers invaded, on Wednesday at dawn, the villages of Deir Ghassana and Nabi Saleh, northwest of the central West Bank city of Ramallah, attacked several Palestinians in their homes, before abducting three young men, and wounding a family.

The soldiers attacked the families of the two detainees, in addition to invading the home of Mahmoud Tamimi, before assaulting him and his family, causing various cuts and bruises; local medics rushed them to a hospital in Ramallah.

Furthermore, the soldiers invaded Deir Ghassana village, and abducted Majd Abdul-Basset Sho’eibi, after storming his home and assaulting him along with his family.
Page:  7 - 6 - 5 - 4 - 3 - 2 - 1
Powered by