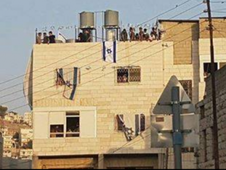 Israeli soldiers abducted, on Thursday at dawn, a young Palestinian man from his home in Kufur Qaddoum town, east of Qalqilia, in the northern part of the occupied West Bank.

The soldiers invaded the town from several directions, before breaking into the home of ‘Assef Hikmat Ali, 20, violently searched the property, and abducted him.

Kufur Qaddoum is subject to frequent military invasions, and violations, as the Palestinians, accompanied by Israeli and international peace activists, continue the weekly popular protests against colonies, the Annexation Wall, and the ongoing closure of the town’s main road, which was blockaded by the army more than 14 years ago.
Including Two Teenagers, Israeli Soldiers Abduct Four Palestinians In Nablus

The Nablus office of the Palestinian Prisoners’ Society (PPS), in northern West Bank, has reported that Israeli soldiers abducted, on Thursday at dawn, four young Palestinian men, after invading their homes and violently searching them, in the governorate.

It added that the soldier abducted another Palestinian, identified as Marcel Mahmoud As’ad, 21, from his home in Salem village, east of Nablus.
Army Abducts Seven Palestinians In Hebron

Israeli soldiers invaded, on Thursday at dawn, several areas in the southern West Bank city of Hebron, illegally confiscated cash and a car, and abducted seven Palestinians, in addition to summoning a former political prisoner for interrogation.

Furthermore, the soldiers invaded Beit Ummar town, north of Hebron, especially the town’s center, al-Misrara, Khallet al-Ein and Beit Za’na, before searching many homes and abducted Riyadh Khdeir Sabarna, 40, and a former political prisoner, who was released this past Sunday, identified as Hammad Hamad Abu Mariyya, 25.

The sources added that the soldiers also abducted Khader Mohammad Dalo, from al-Maslakh area, in the center of Bethlehem city.

The invasions led to clashes between the soldiers and many local youngsters, who hurled stones at the military jeeps, while the soldiers fire live rounds.

Furthermore, the soldiers installed many roadblocks in Jenin governorate, especially on Jenin-Jaffa road, and the entrances of Arraba, Ya’bad and Qabatia towns, before stopping and searching dozens of cars, and interrogated many Palestinians after detaining them.

It is worth mentioning that the Dotan military roadblock near Jenin remains closed by the soldiers for the fifth consecutive day, from 9 in the evening until four at dawn, preventing thousands of Palestinians, including students, workers, merchants, and medical professionals, from freely moving to and from many communities in Jenin and Tulkarem.
26 july 2017
21 Palestinians rounded up in West Bank

Several youths were detained in Nablus after IOF broke into its Akar refugee camp east of the city, which led to the outbreak of limited clashes.

A military checkpoint was also erected in the neighboring town of Udla, where several Palestinian vehicles were stopped and searched.

A minor was among the reported arrests in the city.

In Bethlehem, an activist was arrested from his family house in Takoa town and taken to unknown detention center.

Violent raids were also carried out in Beit Fujar town south of the city, with no arrests reported.

Similar raids were reported in al-Khalil, where IOF soldiers occupied a local house and turned it into a military barracks.

Also in al-Khalil, Israeli settlers carried out collective attacks against Palestinian properties in the Old City, and the towns of Yatta, Seir, and Beit Enoun.

Meanwhile, clashes erupted in Qalqilia when IOF soldiers violently stormed the city amid heavy firing of rubber bullets. Injuries were reported among the locals.

A young man was also detained in Jenin.
Army Abducts Eleven Palestinians In Tulkarem, Jenin And Bethlehem, Injure One In Qalqilia

Israeli soldiers invaded, on Wednesday at dawn, many Palestinian communities in the West Bank governorates of Tulkarem, Jenin and Bethlehem, stormed and ransacked many homes and abducted eleven Palestinians, in addition to wounding one in Qalqilia, and causing many others to suffer the effects of teargas inhalation.

The Tulkarem office of the Palestinian Prisoners Society (PPS), in the northern part of the West Bank, said the soldiers invaded Atteel town, north of the city, broke into dozens of homes and interrogated many Palestinians, before abducting six.

Furthermore, the soldiers invaded homes in Qabatia town, south of the northern West Bank city of Jenin, abducted Yousef Nimir Khozeimiyya, 60, and his son ‘Ala, 24, after breaking into Yousef’s home looking for his nephew, Yasser.

The soldiers also abducted another Palestinian, identified as Rida Ahmad Turkman, 22, and withdrew from the town, taking the abducted Palestinians to an unknown destination.

In addition, the soldiers broke into many stores in Barta’a town, isolated behind the Annexation Wall, south of Jenin, and violently search them, causing damage.

Also, the Bethlehem office of the PPS said the soldiers abducted Omar Ahmad al-‘Amour, 24, from his home in Teqoua town, east of the city, while Nidal Ali Affana, 20, from Aida refugee camp, north of Bethlehem, was abducted a the Container military roadblock, northeast of Bethlehem.

In related news, several army jeeps invaded Qalqilia city, in northern West Bank, and clashed with dozens of youngsters, who hurled stones and empty bottles at the military, after the soldiers stormed and ransacked many homes.

Local medics also provided many Palestinians the needed treatment, due to the severe effects of teargas inhalation.

In the Gaza Strip, Israeli navy ships opened fire on many Palestinian fishing boats, in the northern part of the coastal region, forcing the fishers back to shore.
Israeli Soldiers Abduct Six Palestinians In Hebron

The Hebron office of the Palestinian Prisoners’ Society (PPS) said the soldiers invaded many neighborhoods in the city, searched them, and abducted Nasser Emad Abu Meizar.

It added that the soldiers also invaded homes in Surif town, north of Hebron, and abducted Mohammad Mahmoud Jubran, 47, in addition to a senior officer with the Palestinian Preventative Security, identified Mohammad Abdullah Eghneimat, and his son Abdullah.

Furthermore, the soldiers abducted Sa’ed Jihad Abu Sondos, 27, in addition to Yaman Omar Khashan, 26, from his home in the al-Fawwar refugee camp, in Doura town south of Hebron.
Army Abducts A Journalist, Injures Worshipers, Including A Child, Near Al-Aqsa Mosque

Israeli soldiers attacked, on Tuesday evening, Palestinian worshipers after holding evening prayers in the Gate of the Tribes area, near al-Aqsa Mosque, in occupied East Jerusalem, wounding dozens of Palestinians, including a child and a journalist, in addition to abducting a journalist.

The WAFA Palestinian News Agency has reported that the soldiers assaulted the Palestinians in a surprise attack near al-Ghazali area, striking them with batons, in addition to firing many gas bombs and concussion grenades at them.

The Palestinian Red Crescent (PRC) has reported that its medics moved three Palestinians to a hospital, including a child, only ten years of age, who was shot with concussion grenades in her head and arm.

PRC medics also provided the needed treatment to thirteen Palestinians, who were shot with rubber-coated steel bullets; one of them is a journalist, identified as Fatima al-Bakri.

In addition, the soldiers abducted a journalist identified as Fayez Abu Rmeila, and took him to an unknown destination.
25 july 2017
Army Injures Two Palestinians, Abducts Two, In Nablus, And One in Jenin

Media sources in Nablus said the soldiers invaded many neighborhoods, and clashed with local youngsters, especially in the Eastern Market area, before shooting Ahmad Abu Mosallam, 20, with a live round in the shoulder, and Fadi Ibrahim ash-Shami, with a rubber-coated steel bullet.

Medics provided the urgently needed treatment to the two Palestinians, before moving them to Rafidia governmental hospital.
The soldiers also invaded and ransacked many homes in the governorate, and abducted Rajaey al-Qonna, from al-Ein refugee camp, and Qoteiba ‘Aseeda, from Tal village.

In Jenin, also in northern West Bank, the soldiers abducted Mohammad Yousef Manasra, 21, from his home, after invading and searching it.
PPS: “Israeli Army Abducts 24 Palestinians in The West Bank”

The Palestinian Prisoners Society (PPS) has reported that Israeli soldiers abducted on Tuesday at least 24 Palestinians, in different parts of the occupied West Bank.

The Hebron office of the Palestinian Prisoners’ Society (PPS), in the southern part of the occupied West Bank, has reported that Israeli soldiers have abducted three Palestinians in the governorate, and installed many roadblocks.

The PPS said the soldiers invaded and searched homes in the Old City, and abducted Ziad Yousef Abu Aisha.

It added that the soldiers abducted Abdul-Hamid Maher Arjan, 18, from Abu al-Asja village in Doura, southwest of Hebron.

The PPS added that the soldiers invaded many neighborhoods in the towns of ath-Thaheriyya, Yatta and Ethna, and installed roadblocks on main roads leading to Sa’ir and Halhoul towns, in addition to Hebron’s northern entrance, before stopping and searching dozens of cars, and interrogated many Palestinians while inspecting their ID cards.
Israeli Soldiers Abduct Four Palestinians In Ramallah

Israeli soldiers invaded, on Tuesday at dawn, Kobar village, northwest of Ramallah, and abducted three Palestinians, including the mother of a Palestinian who killed three Israeli settlers in their home, this past Friday. The army also abducted senior nonviolent activist in Bil’in.

He added that the soldiers abducted Ibtisam al-‘Abed, the mother of Omar, who killed Yosef Salomon, 70, his daughter Chaya, 46, and his son Elad, 36, in their home in Halamish nearby Israeli colony, on Friday.

Also in Kobar, the soldiers abducted Emad Abdul-Mon’em Sabah and Soheib Saher al-Barghouthi, from their homes, after assaulting them and their families, and caused damage to their furniture and belongings.

In addition, local medics rushed a young man, identified as Abbas Barghouthi, to a hospital after the soldiers assaulted him, causing various cuts and bruises, and confiscated a car belonging to one of his relatives.

Sabah also said that the soldiers bulldozed the village’s main road, which connects it with Abu Shkheidem nearby village.

On Tuesday morning, the soldiers abducted, Abdullah Abu Rahma, a senior nonviolent activist, the coordinator of the Popular Committee against the Wall and Colonies in Bil’in village, west of Ramallah.

Abdullah was taken prisoner at a sudden roadblock installed by the soldiers at the main entrance of Bil’in, while he was on his way to his work, before the soldiers took him to an unknown destination.
Army Abducts Six Palestinians In Bethlehem 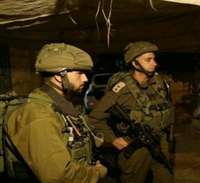 Israeli soldiers abducted, on Tuesday at dawn six Palestinians, including five teenagers, and summoned one Palestinian, after invading their homes and ransacking them, in different parts of Bethlehem governorate, in the occupied West Bank.

It added that the soldiers abducted Ibrahim Khaled Hamamra, 17, and Mohammad Raouf Abu Yabes, 18, from Husan town, west of Bethlehem.