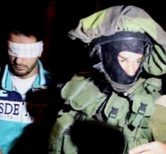 Israeli soldiers abducted, on Thursday at dawn, nine Palestinians from their homes in several parts of the occupied West Bank, the Palestinian Prisoners’ Society (PPS) has reported.

The PPS said the soldiers invaded and searched dozens of homes across the West Bank, interrogated many Palestinians while inspecting their ID cards, and abducted nine of them.

The soldiers also installed roadblocks in many parts of the West Bank, stopped and searched dozens of cars.

Israeli occupation forces (IOF) on Tuesday evening arrested a Palestinian merchant while he was passing through Beit Hanoun (Erez) crossing north of the Gaza Strip.

A human rights source reported that the detainee was identified as Mahmoud al-Shaer, 50, and he is a resident of Rafah city.

The IOF soldiers stationed at Beit Hanoun crossing have recently arrested many Palestinians, whether merchants, patients or their companions, while they were travelling through the crossing.
Israel arrests Palestinian for obtaining Israeli military documents

Hebrew sources disclosed the arrest of a Palestinian youth, from occupied Jerusalem, after allegedly accessing military documents of the Israeli army.

Israeli channel 14 revealed on Wednesday that the Palestinian man was from Hazma town northeast of occupied Jerusalem. He managed to break into a car of an Israeli commander of the army where he took out a bag containing security files and burned it.

No further information on the nature of the documents or about the incident in general were provided.
IOF bans ex-detainee from entering his town

The PIC reporter said that Qabaha has been denied his right to enter his town, which is isolated by the Israeli Separation Wall, for three days for alleged security reasons. He was not allowed to access the town through an Israeli metal gate placed at the entrance to the town as the only pathway in Bartaa.

He added that he had to stay in Jenin city because of the Israeli ban of entry order. Ex-detainee Qabaha was released one month ago after being imprisoned for three years in Israeli jails.
Former minister placed in administrative detention

The Israeli authorities on Wednesday approved the administrative detention of the former minister for prisoners’ affairs Wasfi Qubaha for five months.

Family sources affirmed to the PIC reporter that Qubaha was placed in administrative detention, according to which he is held without charge or trial.

The former minister was arrested last Thursday from his family house in Jenin after being violently stormed by dozens of Israeli soldiers.

His arrest came only five months after his last release from Israeli jails, the sources added.

Qubaha, a prominent leader in Hamas Movement, has been repeatedly arrested by Israeli forces and has spent a total of 15 years in Israeli prisons, mostly in administrative detention.
IOF raids house in Jenin, kidnaps father and three sons

Local sources told the PIC reporter that dozens of IOF soldiers broke into the house and stayed there for about half an hour.

The sources added that neighbors were able to take photos of two young men handcuffed inside the house. After the IOF withdrew from the area, they found out that the owner of the house Ahmad al-Tayyeb and his three sons Tamer, Abdul-Raouf and Saber were arrested.

A Palestinian youth identified as Mahmoud Abu al-Wafa was injured by a rubber-coated metal bullet to the leg during clashes in Jenin camp following the IOF raid.

The PIC reporter said, quoting local sources, that the IOF soldiers heavily fired rubber-coated metal bullets and teargas canisters at Palestinian citizens as they were withdrawing from the camp.

Al-Wafa was transferred to a local hospital for treatment, while a number of Palestinian citizens suffered breathing difficulties as a result of inhaling teargas.
IOF detains 29 Palestinians from West Bank

The Israeli Occupation Forces (IOF) at dawn Wednesday conducted multiple raids across the West Bank, detaining a total of 29 Palestinians, including a former prisoners and leaders in Hamas Movement.

At least 12 arrests were reported in Jenin, mostly members of Hamas Movement, while seven others were carried out in Ramallah, the Palestinian Prisoners Society (PPS) said.

Another Palestinian was detained in a similar overnight raid in Tulkarem.

In Nablus, IOF violently stormed al-Asira town and carried out a large-scale raid and search campaign.

A number of make-shift checkpoints were erected during the raids.
Rights groups urged to save life of cancer patient in Israeli jail

The family of Palestinian prisoner Sami Abu Dayyak, from Silat ad-Dhahr town in Jenin, has appealed to human rights groups to follow up his health condition and intervene to have him released.

In press remarks on Tuesday, Ahid Abu Dayyak, the prisoner’s father, said that Sami suffers from cancer and his condition worsens in Ramla jail.

He affirmed that his son is exposed to medical neglect by Israeli jailer and appealed to human rights groups to save his life.

Israeli occupation forces (IOF) on Tuesday apprehended a Palestinian youth after storming his home in al-Khalil city in the southern West Bank.

The PIC reporter said that IOF troopers raided, in the afternoon, Jabal Jales area to the east of the city and arrested Raed al-Baradi after searching his home thoroughly.
Court renews administrative detention of prisoner Ibrahim Arouj

Israeli occupation authorities on Tuesday decided to extend the administrative detention of prisoner Ibrahim al-Arouj, 33, for the ninth time in a row.

The family said that Ibrahim has been held in solitary confinement and denied family visits for about 8 months now for no apparent reason.

Al-Arouj has been detained without charge or trial since his arrest on 24th January 2016, a few months after he got married.

Al-Arouj spent 11 years in Israeli jails in the five times he has been detained by the Israeli occupation forces. That's why he has not yet completed his study at Palestine Polytechnic University.
Army Abducts Three Palestinians Near Nablus

Israeli soldiers abducted, on Tuesday evening, three Palestinians, including two children, after stopping him at a military roadblock near their town, Aqraba, south of the northern West Bank city of Nablus.

The soldiers cuffed and blindfolded the Palestinians, before taking them to an unknown destination.

It remains unknown why they were taken prisoner, especially since there were no protests in the area.
16 Palestinians arrested in IOF fresh raids

In Ramallah, violent clashes broke out after IOF broke into Abu Shkheidam to the north and Al-Quds Street south of the city.

Heavy live and rubber bullets were fired during the clashes amid an excessive use of teargas bombs.

Similar raids were carried out in Beit Umar town in al-Khalil, where IOF confiscated $ 1,300 from a local house under flimsy pretexts.

In a statement issued early today, Israeli army claimed that 16 “wanted” Palestinians were detained for being involved in anti-occupation activities.

Weapons and tens of thousands of shekels were found during the raids, the statement added.

In Nablus, four young men were rounded up from their family houses including an ex-prisoner who was released only three weeks ago.

Seven other youths were detained in al-Khuder town south of Bethlehem.
4 Palestinians kidnapped by IOF from Nablus

Clashes flared up between Israeli soldiers and Palestinian anti-occupation youth.

Meanwhile, extremist Israeli settlers stormed Madama’s outskirts, in what locals dubbed a sign of a preplanned scheme to seize Palestinian lands in the area.
Page:  7 - 6 - 5 - 4 - 3 - 2 - 1
Powered by