Israel's Ofer military court on Monday delayed its decision on the fate of the Palestinian detainee Areej Houshiyyeh, 19, until 8th August.

Palestinian Prisoners Media Office said that Israeli occupation forces arrested Houshiyyeh on 28th December 2017 while she was trying to protect her sister, who has Down syndrome, as she was taking the wrong route at Qalandia checkpoint.

The Office added that the Israeli court has delayed Houshiyyeh's trial 12 times since she was arrested until an indictment is prepared against her. She is currently held in Hasharon jail.

Dozens of Palestinians have been arbitrarily arrested or killed by Israeli occupation forces while passing through Qalandia checkpoint over the past years.
Undercover Israeli Soldiers Kidnap Two Palestinians, Including A Security Officer

The two Palestinians have been identified as Rashed Nizar Shbeita, 30, a Palestinian National Security officer, and Nassar Dahbour, 34, from Azzoun town, east of Qalqilia.

The two were driving their car when undercover Israeli soldiers, driving a car with Palestinian license plates, chased them in Azzoun town and on Azzoun-Jayyous road, before crashing their vehicle after ramming it with their car.

The two were injured due to the crash, and were taken to an unknown destination by regular army units that arrived at the scene.
Palestinians aggressively beaten by Israeli soldiers in arrest sweeps

A lawyer from the Palestinian Prisoners Society (PPS) quoted 21-year-old detainee Jihad Muqbil, from Beit Ummar, as stating that an Israeli patrol stormed his family’s home at predawn time on July 11 and wreaked havoc on the building using sniffer dogs, before they aggressively beat Jihad using rifle butts.

Prisoner Hasan al-Jawabra, aged 25 and from the Arroub refugee camp, said Israeli soldiers ransacked his family’s home on July 11, 2018 and smashed the entrance gate, shortly before they subjected him to violent beating and dragged him to the Etzion detention center.

15-year-old minor Ahmed Rafat al-Badawi also said Israeli occupation forces broke into his family’s home at the crack of dawn on July 16, 2018 and beat him violently.

The Palestinian Prisoners’ Society (PPS) has reported that Israeli soldiers abducted, on Monday at dawn, at least eleven Palestinians from several parts of the occupied West Bank.

The PPS sad the soldiers invaded and ransacked dozens of homes, and interrogated many Palestinians, before abducting at least eleven.

It identified the abducted Palestinians as:

Local sources affirmed that two Palestinian young men, identified as Ehab Raed Ziadat and Karim Ibrahim Manasra, were rounded up from their workplace in the town.

The two detainees were later taken to unrevealed detention center, the sources added.
11 Palestinians kidnapped in J’lem and W. Bank

The Israeli occupation forces (IOF) at dawn Sunday kidnapped 11 Palestinian citizens during campaigns in Jerusalem and the West Bank.

The Israeli army also said that its forces arrested four Palestinians in the West Bank, accusing them of being involved in activities against Israel.
Soldiers Abduct Palestinian Driver Of Education Ministry After Breaking His Rib

Israeli soldiers abducted, on Saturday at night, a driver who works for the Education Ministry in Qabatia town, south of the northern West Bank city of Jenin, after attacking him, and breaking one of his ribs, in al-Khan al-Ahmar near occupied Jerusalem.

Zakarna added that the soldiers stopped Kamil at the entrance of al-Khan al-Ahmar, after he tried to remove one of the police barriers, and frequently assaulted him, in addition to using their tasers on him.

Kamil’s brother said the soldiers took him to Ofer detention center, despite his need to urgent medical attention, especially since the soldiers broke one of his ribs.

It is worth mentioning that the soldiers installed barriers, in addition to placing sand hills and rocks, blocking the entry of solidarity activist into al-Khan al-Ahmar, which is still facing the threat of demolition and displacement.
21 july 2018
PPS: “Israeli Soldiers Deliberately Damage Property During Their Nightly Invasions Into Homes”

The head of the Hebron office of the Palestinian Prisoners’ Society (PPS) Amjad Najjar, stated that Israeli soldiers resort to the excessive use of force during their nightly invasions into Palestinian homes, and deliberately cause damage to furniture and property during the violent searches their conduct.

In a statement released Saturday, Najjar said that the PPS documented more than 300 abductions of Palestinians from their homes, in the past few months, in which the soldiers caused excessive damage to the homes, including destroying furniture, breaking and removing floor tiles, slashing furniture, tearing apart books, destroying bedrooms and closets, in addition to stealing money under vague pretexts.

He stated that dozens of Palestinians provided sworn testimonies to the Palestinian Prisoners’ Society in which they revealed the extent of damage caused to their homes, stating that the soldiers also wired and detonated their main doors of their homes before storming them.

The families also said that the soldiers even destroyed photo albums, damaged or confiscated computers, laptops and mobile phones without any legal cause or justification.

Najjar stated that, in many cases, the soldiers forced the families in one room while searching their homes, and by the time they are allowed out, they realize the extent of damage caused to their property.

He said that the soldiers sometimes raid the fridges of the families, use their microwave ovens and eat their food, “just like mercenaries would do, they would cause the utmost level of destruction before they leave.”

“What Israel’s army is doing is piracy and theft,” Najjar stated, “They terrify the families, the women and children, and cause extensive and serious destruction.”

Najjar urged the International Red Cross and various legal and human rights organizations to intervene and put an end to what he called “the escalating organized crimes, committed by the Israeli army Mafia against the Palestinian civilians,” and stated that such violations must be prosecuted.

He also said that the families already face dire economic conditions, and these violent Israeli military invasions and searches cause them heavy financial burdens, and called for forming a special committee to compensate them for their losses.
Israeli Soldiers Abduct Man With Down Syndrome, Break His Hand 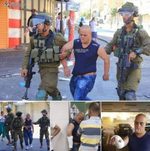 Israeli soldiers abducted, on Saturday morning, a Palestinian man with Down Syndrome, and repeatedly beat him until breaking his wrist, in Hebron city, in the southern part of the occupied West Bank.

Media sources in Hebron said the soldiers abducted Mahmoud Zayed in Bab az-Zawiya area, in the center of Hebron city.

The wounded Palestinian man posed no threat to the soldiers, and was just walking in the Old City, when he was violently assaulted by them, local confirmed.

Local photojournalist Amer Shallodi was one of the people who witnessed the assault and managed to take pictures of the soldiers detaining Zayed, before and after assaulting him and breaking his wrist.
20 july 2018
Israeli Soldiers Abduct A Child Near Bethlehem, Two Young Men From Jenin And Jerusalem

Israeli soldiers invaded, Friday, the al-Khader town, south of the West Bank city of Bethlehem, and abducted a child. The army also abducted two young men near Jenin and Jerusalem.

Ahmad Salah, the coordinator of the Popular Committee against the Annexation Wall and Colonies in al-Khader, said the soldiers abducted Mahmoud Bassam Salah, 14, While standing in front of his home in Umm Rokba area, south of al-Khader.

He added that the soldiers cuffed and blindfolded the child, before moving him to an unknown destination.

In related news, the soldiers abducted a young man, Waseem Morad Rabay’a, from Methaloon town, south of the northern West Bank city of Jenin, while trying to cross the al-Karama Border Terminal, in his way to Jordan.

The Shin Bet, Israel’s internal intelligence agency, on Friday morning kidnapped a Palestinian young passenger at Allenby border crossing as he was en route to Jordan.

According to local sources, Israeli officers stopped Waseem Rabay’ah, , from Meithalun town in Jenin, at Allenby crossing as he was trying to travel to Jordan  and told him he was under arrest.

Allenby crossing, also known as al-Karama, is a bridge that spans the Jordan River and connects the West Bank with Jordan.

The bridge is the sole designated exit and entry point for West Bank Palestinians traveling in and out of the Israeli occupied territories.
Two Palestinian prisoners sentenced to life in prison

An Israeli court sentenced on Thursday two Palestinian prisoners to life in prison and imposed a heavy fine on both of them, rights sources said.

The detainees were both detained in October 2017 for allegedly killing an Israeli in northern Israel.
Negev prisoners suffer from harsh detention conditions

The Palestinian prisoners in Negev jail suffer from harsh incarceration conditions and are exposed to administrative detention after serving their terms.

Ghassan Zughaibi, a detainee released from Negev jail on Thursday, affirmed that the Israeli security authorities ordered the detention of dozens of prisoners administratively in recent days.

Zughaibi, who spent one year in administrative detention after he completed his eight-year term, also said that the sick prisoners in the jail are deprived of receiving appropriate medical treatment and exposed to deliberate medical neglect.

He  added that the prisoners also suffer from overcrowding in their cells as well as continual raids and maltreatment by soldiers.

The ex-detainee appealed to human rights and medical groups to intervene and pressure the Israeli authorities to improve the conditions of the prisoners in Negev jail and end its administrative detention policy against them.
Page:  8 - 7 - 6 - 5 - 4 - 3 - 2 - 1
Powered by