A Palestinian family who has been battling against a shadowy Israeli settler group for 25 years was forced Wednesday morning to evict their house in the Jerusalem neighborhood of Silwan.

WAFA correspondent said that dozens of heavily-armed Israeli police stormed the house of the Siyam family in Silwan and removed all furniture and electrical appliances to make room for settlers.

The center confirmed that the Siyam family refused to comply with the eviction order and at least a family member was detained.

This came twenty days after an Israeli court dismissed the Siyam family’s appeal to remain in their house and ruled in favor of the Elad shadowy settler group.

Elad group seeks to forcefully displace Palestinians from Jerusalem in line with the policy championed by successive Israeli governments to Judaize Jerusalem.

It is worth noting that parts of the Siyam’s building were seized by the Israeli state under Israel’s Absentee Property Law, which which declares properties belonging to Palestinians who were displaced, often by war or poverty, as “absentee” and therefore state property.

These parts of the family home were then sold to Elad.
Israeli Forces Seize Palestinian Garbage Trucks, Detain Drivers

A group of Israeli soldiers on Wednesday detained Palestinian municipal employees in the village of Beit Fourik, in the northern West Bank, and seized several vehicles used for trash collection.

According to local sources, the vehicles that were seized include a garbage truck, a tractor used for hauling garbage and a third vehicle used in trash collection.

The vehicles were loaded with garbage and were headed to a landfill site east of the village, located near Nablus in the northern West Bank, when they were detained by Israeli soldiers in military vehicles.

The soldiers approached with weapons drawn and ordered the municipal employees out of their vehicles, then held them for several hours in the hot sun, and took the vehicles away to an unknown location.

The Palestinian Wafa News Agency spoke with Ata Samara, a health inspector with the Beit Fourik village council, who told them that this trash collection by the municipality is a daily collection, and this is the first time they have been harassed by Israeli occupation forces.

Samara added that the trash dump is located in Area B of the West Bank, which is administered by the Palestinian Authority but falls under Israeli military rule, adding that the village council was not informed by the army that it would no longer be allowed to dump there. He said the seizure of the truck and car is part of an effort by the Israeli army to make life difficult for the Palestinians in that village.

Without a trash truck or a place to put garbage, the Palestinians of the village will be forced to fend for themselves, which will likely result in a buildup of trash at homes in the village, and unsanitary conditions will result.

Israeli forces have targeted the village of Beit Fourik for collective punishment, in violation of the Fourth Geneva Convention, since March, when an Israeli settler was killed in a settlement nearby.
Four West Bankers kidnaped in dawn IOF raids

The Israeli army claimed in a statement that the West Bank detainee were wanted for their involvement in activities against Israel and its citizens.

In al-Khalil, some military vehicles sustained damage during clashes between local young men and Israeli troops in al-Arroub refugee camp.

The IOF also stormed Halhul town, north of al-Khalil and clashed with local youths. Some fields in the area of clashes caught fire as a result of the intensive and random firing of tear gas and stun grenades by soldiers.

In Bethlehem, two young men were reportedly kidnaped from their homes during an IOF campaign in Husan town.

The IOF also detained a young man from Na’lin town in Ramallah after he responded to a summons for interrogation from the Shin Bet.

Another young man identified as Anas Abu Hammad, 20, were taken prisoner during an IOF campaign in Kifl Haris town, north of Salfit.
Life of two hunger-striking prisoners at risk

The PA authority on prisoners’ affairs has warned that life of two Palestinian prisoners in Israeli jails was gravely deteriorating as a result of their hunger strike.

Captives Huthaifah Halabiya, 48, and Jafar Izz Al-Dien, 28, were on hunger strike for 6 days and 23 days respectively in protest at their arrest without trial.

“Izz Al-Dein was suffering of severe headache and loss of weight, while Halabiya was suffering of body pain and blood cancer among other sicknesses” said Jawad Bolus, the director-general of the authority’s legal affairs department.

Both captives were placed in solitary confinement and denied fair treatment by the Israeli prison authority.

On the other hand, Bolus paid a visit to other Palestinian prisoners in Israeli jails to check on their conditions and to find ways and means to improve the captives’ conditions in all Israeli jails.
Female Palestinian Prisoner Declares Hunger Strike in Protest of Her Administrative Detention

A Palestinian woman incarcerated in Israel began, on Sunday, an open-ended hunger strike to protest her detention without charge or trial for 14 consecutive months, the Palestinian Prisoner Society (PPS) said.

Fida Mohammad Daamas, 24, from Beit Ummar town in the south of the West Bank and a student at Al-Quds Open University, was detained in May of last year and placed under administrative detention for six months that have been renewed since then.

She is held at Damoun Prison in central Israel, said PPS, and had previously spent nine months in prison for resisting the occupation, WAFA further reports.

Palestinians held in indefinite administrative detention often resort to hunger strike to protest their incarceration without charge or trial for long periods of time and to demand their release.

PPS said that six other Palestinian men held in administrative detention, at the Naqab desert prison, in the south of Israel, and at Ofer military camp and prison, near Ramallah, in the West Bank, are currently on hunger strike demanding an end to their long detention without charge or trial.

The Israeli occupation forces (IOF) on Tuesday arrested a Palestinian citizen for allegedly attempting to run over Israeli soldiers near Ramallah.

Israeli media sources reported that a Palestinian man on Tuesday afternoon attempted a car-ramming attack near Giv'at Asaf settlement, which is built illegally on Palestinian-owned lands.

No injuries were reported in the incident, they added.

The IOF later threw a cordon around the area, chased the car, and arrested the suspect.
Soldiers Abduct Four Palestinians In Hebron

Israeli soldiers abducted, Tuesday, four Palestinians, including two siblings, from their homes in Hebron governorate, in the southern part of the occupied West Bank.

In the al-Fawwar refugee camp, south of Hebron, the soldiers abducted Hazem Abu Keefa from his home.

In addition, the soldiers installed military roadblocks in Jouret Bahlas area, at the northern entrance of Hebron city, in addition to the main entrances of Sa’ir and Halhoul towns, and the al-Fawwar refugee camp, before stopping and searching several cars, and interrogated many Palestinians while inspecting their ID cards.
Israeli Soldiers Detain Several Journalists In Hebron 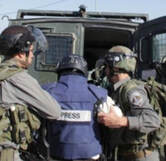 Hamza Khattab, a multimedia professional working with the WAFA Palestinian News Agency, said the soldiers detained him, along with WAFA camerawoman Samar Bader, in addition to several other reporters from various news agencies.

Khattab added that he, and his colleagues, were documenting illegal Israeli colonists bulldozing and uprooting Palestinian lands in the al-Baq’a area, east of Hebron.

He said that Israeli soldiers invaded the area, and attacked many Palestinians, before detaining him and several other journalists, and released them later.

The army claimed that the area was a “closed military zone,” although they were on Palestinian lands.
IOF arrests 14 Palestinians in overnight campaigns

The Israeli occupation forces (IOF) at dawn Tuesday abducted 14 Palestinians citizens during home raids in the West Bank and Jerusalem.

The IOF claimed the detainees were involved in attacks against Israeli soldiers and settlers.

Local sources reported that on Monday night the IOF stormed a Palestinian wedding in Turmus Ayya village, north of Ramallah, and fired tear gas canisters. Many of the guests suffered breathing difficulties.

In occupied Jerusalem, the soldiers abducted two children, one of them seven years of age, but released them later.

In Bethlehem, south of Jerusalem, the soldiers abducted Ehab Mohammad Ayesh, 22, and Omar Thieb al-‘Amour, from their homes.

Furthermore, the soldiers abducted a young man, identified as Islam Shalabi, while crossing a military roadblock near ‘Arraba town, south of the northern West Bank city of Jenin.
Israel issues 432 administrative detention orders since start of 2019

Riyadh Al-Ashqar, a spokesman for the PPCS, said that the number included 294 renewed orders and 138 new orders, noting that the orders ranged from between two and six months.

Al-Ashqar said that the continuous Israeli detention of Palestinian prisoners without trials is a clear violation of international laws and conventions. There are currently 500 Palestinian prisoners being held under administrative detention inside Israeli jails, including four MPs, two children and one woman. Six have launched a hunger strike in protest of their continued detention.

Al-Ashqar called for the international community to put an end to Israel’s disregard for international laws and conventions, and for the Palestinian Authority to urgently raise the issue of administrative detention inside the Israeli jails to the ICC.

There are 5,700 Palestinian prisoners inside Israeli jails, including 48 women, 230 children, and 700 who require medical care.
Israeli Soldiers Shoot and Injure Palestinian at Checkpoint Near Jenin

A Palestinian man was shot and severely wounded by Israeli forces stationed at the Salem checkpoint in the northern West Bank, near Jenin, on Tuesday.

According to local sources, the man is in his fifties, and after he was shot multiple times, he was taken into custody by Israeli security forces, who took him to an unknown location.

Although Israeli military sources claim that the man threw a flaming object toward the soldiers at the checkpoint, that was not confirmed by local sources and eyewitnesses.

It should be noted that Israeli forces often make false claims about Palestinian civilians that they shoot at checkpoints, which are later retracted when proven to be false.

Following the shooting, the Israeli forces shut down the checkpoint, leaving hundreds of Palestinians stranded, with no way to reach their destinations in the northern West Bank.

A Palestinian man was injured on Tuesday afternoon after being shot by the Israeli occupation forces near Salem military camp west of Jenin city.

Local sources told the PIC reporter that the Israeli forces shot and wounded a Palestinian man, whose identity has not been revealed yet, at the entrance of Salem camp.

About 10 minutes later the man was arrested while injured and taken to an undeclared destination.

The Israeli forces declared a state of high alert and the Palestinians who were present in the Civil Administration building and Salem military court were prevented from leaving their places.
Israeli forces arrest two Palestinian children in Jerusalem

The detainees were taken to a nearby detention center for interrogation, the same source added.
Page:  5 - 4 - 3 - 2 - 1
Powered by