After 15 days of investigation, mentally challenged woman who claimed that 2 Palestinians raped her in racist attack changes her account and claims her aunt told her to make it up. Arab MK demands police investigate woman's family.

Two Palestinian suspects who were arrested two weeks ago on suspicion of committing a nationalistically-motivated rape against a mentally disabled Jewish young woman were released on Wednesday after the alleged victim backtracked on her version of events and admitted that, in fact, “the sex was consensual.”

The case began a little over two weeks ago when the woman filed a complaint with the Tel Aviv police in which she claimed to have been the victim of a violent rape and humiliation based on the fact that she was Jewish. As a result of the woman’s complaint, two Palestinian suspects, Omar Aldin Draghmah (42) from Nablus, and a 17-year-old boy from the territories, were arrested.

During the investigation, the police discovered on the woman’s cell phone that she and the Palestinians had had sexual relationships prior to the complaint.

On Wednesday however, 15 days after the commencement of the investigation, during which the police did not succeed in finding evidence supporting the young woman’s version of events, she confessed that “my auntie told me to say it.”

“According to the rape complaint, the suspects also humiliated the girl while making racist and nationalistic remarks,” said the Tel Aviv local police on Wednesday. “The police opened up an investigation immediately and one day after the complaint had been filed two suspects were arrested. They denied the charges leveled against them. Already by the first stage of the investigation it became clear that the investigation was sensitive and complicated and required a...special investigator from the Ministry of Social Affairs to collect evidence.”

“After 15 days,” the statement continued, “of an intense investigation, the police drew the conclusion that, at this stage, an insufficient quantity of evidence had been gathered to prove the charges. In light of this fact, it was requested that the arrest of the two individuals not be extended and that they be released under certain conditions.”

Following the woman’s contradictory accounts, the police is currently contemplating how to deal with her and her aunt who, according to the former’s claims, told her to fabricate the story.

Responing to the new developments, MK Issawi Frej (Meretz) called on Wednesday upon the Police Commissioner to instruct that an investigation be launched against the girl’s family. “After Netanyahu and the police slammed Arab nationalism, it turns out that in this case the nationalistic motivations were on the part of the Jews.”
Israeli Soldiers Kidnapped Twelve Palestinians In The West Bank

The Palestinian Prisoners Society (PPS) has reported that Israeli soldiers have kidnapped, on Thursday at dawn, twelve Palestinians in different parts of the occupied West Bank.

In addition, dozens of soldiers invaded Taybeh village, west of Jenin, and declared it a closed military zone, preventing the Palestinians from entering or leaving it, and conducted massive searches.

Dozens of Israeli soldiers invaded, on Thursday at dawn, several Palestinian communities in the West Bank district of Bethlehem, searched homes and summoned one Palestinian for interrogation.

Eyewitnesses said the soldiers invaded the Saff Street, in Bethlehem, city, before storming and searching a few homes, and summoned a young man, identified as Eyas Minwer Mansour, for interrogation in the Gush Etzion military base and security center.

The soldiers were also heavily deployed around the al-Azza refugee camp, Bethlehem University, and the Saff Street.

In addition, the soldiers invaded the western areas of Beit Fajjar town, south of Bethlehem, violently searched a home belonging to Abu Rashid family, and withdrew without conducting any arrests.
Army Kidnaps Three Palestinians In Tulkarem, Two In Hebron 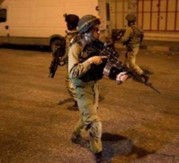 The Palestinian Prisoners Society (PPS) has reported that Israeli soldiers invaded several neighborhoods in Hebron and Tulkarem, in the occupied West Bank, and kidnapped five Palestinians, including a former political prisoner.

The PPS said the soldiers searched a few homes in Hebron city, in the southern part of the occupied West Bank, and kidnapped a former political prisoner, identified as Tahseen al-Ja’ba, in addition to Hatem Mohammad al-Jondi.

In addition, the army invaded Saida village, north of the northern West Bank city of Tulkarem, searched and ransacked many homes, and kidnapped three Palestinians.

The PPS stated that the kidnapped Palestinians have been identified as Shadi Mahmoud al-Ashqar, 19, Sameh Bilal Nimir ‘Ajaj, 21, and Mohammad Hamza Ahmad ‘Ajaj, 19.
IOF arrests Palestinian after his attempt to stop arrest of child

The Israeli occupation forces (IOF) on Wednesday afternoon arrested two Palestinian citizens, one of them after he tried to prevent soldiers from detaining a child in Occupied Jerusalem.

According to Quds Press, plain-clothes policemen and border soldiers stormed Attur neighborhood in east Jerusalem and kidnapped Khaled Khuwais, a school doorkeeper, after he intervened to prevent the arrest of a child.

The Israeli forces also assaulted a female teacher who also tried to save the boy from arrest.

There is still no information if the boy was detained or not.

Earlier on the same day, the Israeli police had carried out dawn raids on homes in the neighborhoods of Attur and Suwanna in Jerusalem and kidnapped more than 33 Palestinians, including teenagers and children.

In another incident, the Israeli police said yesterday it had arrested a 43-year-old Palestinian from northern Palestine on allegations of inciting violence on his Facebook page. An Israeli magistrate court extended his detention until next Sunday at the request of the police.
1 june 2016
Mentally disabled girl backtracks on testimony

Palestinians, who were suspected of raping her, set free after their arrest was extended for three days on Monday; the incident had initally caused controversy when the police delayed passing along information of the incident to the police.

Two Palestinians who were suspected of violently raping a young mentally disabled girl were freed from jail after the latter backtracked on her testimony.

The police investigated her claims and did not find any evidence of rape, humiliation, or violent behavior.

Just last week, the police caused a stir when they did not pass along information to crime reporters about the incident.

After the incident was finally made known, Prime Minister Benjamin Netanyahu hastily accused political officials and the media of not condemning the incident: “This is a shocking crime that calls out for wall-to-wall condemnation," the Prime Minister wrote on Thursday, "but for some reason such condemnation hasn't been heard – not in the media and not across the political system. We can only imagine what would have happened in the reverse case. We will charge the highest price, and use the full extent of the law against all those involved in this cruel incident.”

"Until the third suspect in the matter is captured, we are requesting to keep the motive listed as nationalistic." A public defense attorney representing the suspect said in a hearing at the Tel Aviv Magistrate's Court that "This man was in Israel legally, a father, who, following a quarrel between neighbors, is now here."

The defense attorney continued, saying "there still has not been any evidence found that can bring about an indictment, and the lack of evidence speaks for itself. I believe that also the pictures – distressing pictures – are not attributed to the suspect."
Prisoner transferred to hospital after heart attack

The Palestinian prisoner Ahmad Wraidat was transferred from Negev Israeli prison to Afola’s hospital for treatment.

The Palestinian Prisoner Society revealed that the sick captive Wraidat, who is from al-Thaheriya town in al-Khalil governorate, was arrested in 2001 and sentenced to 16 years.
Israel kidnaps elderly women, sentences minor girl to jail

The Israeli occupation forces (IOF) on Tuesday kidnapped an elderly Palestinian lady from her own home in Occupied Jerusalem and sentenced a Palestinian girl to five months in jail.

Palestinian citizen Lubna al-Sayad said Israeli intelligence officers, escorted by special forces, stormed the family home of her 64-year-old mother Na’ima Karawi in al-Tur neighborhood, in eastern Occupied Jerusalem, and wreaked havoc on the building before they dragged the mother to the Mascoubiya detention center for questioning.

The daughter sounded the alarm over her mother’s exacerbated psycho-physical status due to the abrupt home break-in and abduction carried out by the occupation soldiers with no consideration for the woman’s age.

Na’ima Karawi, an activist in the prisoners’ affairs and the Palestinian cause, has been subjected to several arrests on earlier occasions.

The Israeli intelligence further summoned the female Palestinian instructor Hanadi Helwani for interrogation in the Mascoubiya center, a couple of days after she was released on conditions of a ten-day-house-arrest and a one-month-travel-ban.

Mrs Helwani, a sit-inner at the holy al-Aqsa Mosque, was released on Sunday from the Mascoubiya detention center, where she had been interrogated for one week over her anti-occupation activism.

In a related development, the Israeli Magistrate’s Court ruled for sentencing 16-year-old Sundus Sameer Abeid to five months in jail on allegations of holding a knife, lawyer Muhammad Mahmoud said.

Sundus was arrested by the occupation soldiers near al-Issawiya town on March 25 allegedly after she attempted to stab a soldier.

The Israeli Ofer military court also sentenced prisoner Othman Abeidou to 10 months in jail and a bail of 550 U.S. dollars on charges of incitement on Facebook.

The Palestinian Detainees’ Committee warned, Wednesday, that three Palestinian political prisoners, held by Israel, are facing deteriorating health conditions, in the Eshil Israeli prison, and are denied the right to proper medical attention.

In its statement, the ministry said that the detainees were not provided with the needed professional medical treatment, although they are suffering from various serious conditions.

It stated that detainee Bassam Sayeh, 43, from the northern West Bank city of Nablus, was moved several days ago from Ramla prison to Eshil. It added that Sayeh suffers from various serious health conditions, including bone and blood cancers.

The committee further stated that detainee Mahmoud Abu al-Fool, from Jabalia in northern Gaza, has various injuries in one of his legs, and is facing the possibility of amputation due to complications.

Another detainee, identified as Ayyoub Atallah, from Gaza, is also facing various complications in one of his legs, especially after amputation and the installation of an artificial limb that does not fit him, resulting in inability to walk and severe pain.
Israeli Soldiers Kidnap Ten Palestinians In Hebron And Tubas

Israeli soldiers kidnapped, on Wednesday at dawn, six Palestinians in the southern West Bank district of Hebron, and four others in Tubas, in the northeastern part of the West Bank.

Furthermore, the soldiers invaded and searched several homes in Tubas, and kidnapped Hamza Daraghma, his brother Mo’men, in addition to Ahmad Mousa Daraghma.

Israeli soldier invaded, on Wednesday at dawn the Suwwana neighborhood, and the at-Tour town, in occupied East Jerusalem, stormed and ransacked dozens of homes and kidnapped 45 Palestinians, including several children, the Wadi Hilweh Information Center in Silwan (Silwanic) said.

Lawyer Mohammad Mahmoud said the soldiers moved most of the kidnapped Palestinians to the Police station in Salaheddin Street, in Jerusalem.

Mahmoud added that the police decided to release most of the kidnapped after interrogation, while at least five of them will be sent to the District Court, for charges related to what the army called “throwing stones at army and police vehicles.”

The kidnapped Palestinians have been identified as:
Mafarjeh suspends hunger strike after date set for his release

Palestinian prisoner Adeeb Mafarjeh suspended his 59-day hunger strike on Tuesday following an Israeli pledge to release him next December, according to the Palestinian commission of detainees and ex-detainees.

29-year-old Mafarjeh, from the West Bank town of Beit Liqya, suspended his hunger strike after an Israeli court ruled he would be released on December 20.

The prisoner has been in administrative detention with no indictment or trial since December 10, 2014 and started his hunger strike about two months ago to pressure his jailers to release him.
Page:  2 - 1
Powered by