The child was kidnapped last week at Qalandiya military checkpoint following claims that she attempted to stab Israeli soldiers. Her family denied the allegations.

Prior to her arrest, Malak, a ninth grader, have had her hands cuffed with plastic irons and had been subject to provocative inspection and intensive field interrogation for over four hours.

She was later dragged to an iron cell at the Container checkpoint, where she had been locked up for hours, before she was transferred to Sharon jail. She had reportedly been made to endure strip searches and exhaustive interrogations.
Eight Palestinians kidnapped by IOF in J’lem and W. Bank

The detainees were identified as Mohamed al-Abbasi, Ragheb Abu Sanaina, and Ahmed al-Tamimi.

Another citizen called Mahmoud Ortani, from Jenin, was rounded up at a makeshift checkpoint the IOF set up on a road near Tulkarem city.

In Ramallah, the IOF kidnapped Ahmed al-Sayed and Najmuddin Hamed during a campaign in Beitin town.
Israeli Soldiers Abduct A Palestinian In Bethlehem

Several Israeli military jeeps invaded, on Sunday at dawn, the town of Husan, west of Bethlehem in the occupied West Bank, searched homes, before abducting a young Palestinian man, and summoned a teen for interrogation.

The Bethlehem office of the Palestinian Prisoners’ Society (PPS) said the soldiers abducted Wa’ad Kamal Zaghoul, 26, and took him to the nearby Etzion military base.

Local sources revealed that two Palestinians from al-Ubaidiya town in Bethlehem were rounded up at the hands of IOF soldiers who broke into and searched their homes after storming the town.

The arrested young men were identified as Qutaiba Khalifa, 18, and Muath al-Asa, 22.

In another context, Jewish fanatic settlers opened their gunfire at the family of Yaser Abu Zeid while crossing a bypass road near their home in Deir Estia town in Salfit. No injuries were reported.
IOF kidnaps two W. Bank young men after their return from J’lem

The Israeli occupation forces (IOF) on Friday night kidnapped two Palestinian young men upon their return to the West Bank from Jerusalem, where they performed prayers at the Aqsa Mosque.

They added that the checkpoint was set up especially to ambush and capture West Bank young men under age 40 after they entered Jerusalem to pray at the Aqsa Mosque.
2 june 2017
11 Palestinians arrested during overnight raids in West Bank

The Israeli Occupation Forces (IOF) carried out overnight raid and search campaigns throughout the West Bank. At least 11 Palestinians were arrested during the raids.

The spokesman for the Israeli army said that eight Palestinians were arrested for being allegedly involved in anti-occupation activities.

Two of the reported arrests were carried out in al-Khalil while six others were rounded up in Nablus, according to the sources.

Palestinian sources pointed out that violent clashes broke out in Jenin as IOF arrested three local residents including a lawyer.

Similar clashes erupted in Kafer Qaddum town in Qalandia when IOF stormed the area amid heavy firing of teargas bombs.

At least one young man was arrested from his house in the town, while several houses were violently stormed and searched.
Palestinian young woman suspected of planning attack arrested

0404 Hebrew news website claimed that an unidentified young woman was detained for being suspected in planning attacks within the Green Line.

The detainee was immediately taken for investigation, the sources added.

Rights groups have reported that hundreds of Palestinians were killed and detained at Israeli military checkpoints without posing any threat to Israeli soldiers.
Report: 370 Palestinians including women, minors arrested in May

10 Palestinians were arrested from the blockaded Gaza Strip including 2 women and 7 fishermen, one of them died after being shot by Israeli forces.

The report showed that among the 18 female captives were 2 detained minors, aged 14 and 17 years old and a wounded woman.

3 Women of the arrested were from Occupied Jerusalem and three others were from al-Khalil. A 17-year-old girl from Ramallah was also shot and injured before being arrested by Israeli soldiers.

7 Palestinian journalists including an ex-detainee and a female journalist were among the Palestinians who were arrested in May, the report highlighted.

The soldiers also installed a roadblock, before stopping and searching dozens of cars, abducted a lawyer, identified as Ibrahim Abdul-Basset Yassin, 28, and confiscated his car.
Israeli Soldiers Abduct A Young Man In Qalqilia

Israeli soldiers abducted, on Friday at dawn, a young Palestinian man from his home, in Kufur Qaddoum town, east of Qalqilia, in the northern part of the occupied West Bank.

Morad Eshteiwy, the media coordinator of the Popular Committee against the Annexation Wall and Colonies in the town, said the soldiers stormed and ransacked many homes, and abducted Ahmad Abdul-Salam Jom’a, 21.

Eshteiwy added that owners of some of the invaded homes have been identified as Akram Abdullah, Abdul-Razeq Amer and Mofeed Barham.

The invasion led to clashes between the soldiers and many local youngsters, who hurled stones at the military vehicles, while the army fired gas bombs and rubber-coated steel bullets.
1 june 2017
Israeli Soldiers Abduct A Palestinian Near Ramallah

Israeli soldiers invaded, on Thursday evening, the village of Khirbit Abu Falah, northeast of the central West Bank governorate of Ramallah and Al-Biereh, and abducted a young Palestinian man.

The sources added that the young man is a recent graduate of Birzeit University, and that the soldiers cuffed and blindfolded him, before moving him to an unknown destination.
Army Shoots A Young Palestinian Woman After She Reportedly Stabbed A Soldier 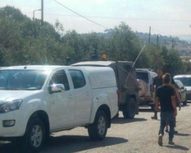 Israeli sources said the young woman suffered a severe injury, after the soldiers shot her in the stomach, while the wounded soldier sustained a mild injury and was moved to a hospital.

The Palestinian woman was receiving treatment at the scene, and was later moved to a hospital.

Israeli daily Haaretz quoted colonist settlers claiming that the soldiers demanded that she stays away from the post, “but she approached them, and stabbed one, before she was shot.”

Following the incident, the army closed the main Palestinian road, linking between the governorates of Jenin and Tulkarem, also blocking traffic to all villages and towns near Jenin city.
Page:  2 - 1
Powered by