Israeli authorities claimed on Thursday the arrest of a Hamas cell that planned to assassinate an Israeli military officer in retaliation for the murder of al-Qassam Brigades commander Mazen Fuqaha.

Israeli Channel 2 reported that a joint operation between the Shin Bet and Israeli police led to the arrest of seven Palestinians from the town of Jaljulia in 1948 Occupied Palestine for planning to carry out anti-occupation attacks against Israelis.

The channel alleged that one of the individuals, Mahmoud Daoud, was privy to a plan by brothers Adam and Faras Faki to assassinate an Israeli army officer in revenge for the assassination of Fuqaha who was shot dead on March 24 near his house in Gaza City. Hamas held Israel responsible for his killing.

According to the investigation, Adam Faki was recruited by his brother Muhammad during a family wedding in the Gaza Strip, and took part in military training in the coastal enclave, the channel pointed out.
Journalist Qiq to be free in few months from Israeli jail

The lawyer of detained journalist Mohamed al-Qiq was able to clinch a deal that would lead to his release in six months from an Israeli jail.

Israeli prosecutors had threatened to extract a court verdict sentencing Qiq to over two years in prison on allegations of inciting against Israel during his participation in a ceremony held by Hamas at Birzeit University near Ramallah last December.

Last May, an Israeli court rejected an appeal filed against the continued detention of prisoner Qiq.

The Israeli Occupation Forces (IOF) launched at dawn Thursday a large-scale raid and arrest campaign throughout West Bank and occupied Jerusalem. Ex-prisoners, minors, and university students were among the reported arrests.

At least five Palestinian youths were detained as IOF stormed several towns south of Nablus, including the ex-prisoner Mohamed Allan who waged a hunger strike for 65 days in Israeli jails before his release in 2015, according to the PIC reporter.

Similar raids were carried out in Jenin province where a 20-year-old youngster was detained in Jalama town.

IOF also raided the house of Hamas’s spokesman Abdul Basset al-Haj and interrogated him for hours before leaving the area.

Meanwhile, a PIC correspondent reported that dozens of Israeli soldiers stormed Arraba town in Jenin province accompanied with a number of bulldozers and leveled the evacuated Dotan military camp.

A military checkpoint was also erected in the town where several Palestinian vehicles were stopped and searched.

Along the same line, a university student was detained after IOF soldiers violently stormed and searched his family house east of Tulkarem while a military checkpoint was erected at the main road leading to Nablus.

Two more arrests were carried out in Qalqilia, while violent clashes broke out in Bethlehem as IOF stormed the city amid heavy firing of teargas bombs.

In Occupied Jerusalem, Israeli police arrested three minors aged between 13 and 16 for allegedly being involved in stone-throwing incidents.

The detainees were taken to a nearby police station in al-Tur town for investigation.
Center: New sanctions on prisoners contrary to the strike's agreement

The Palestinian Prisoners Center for Studies said on Wednesday that the harsh measures and sanctions imposed on the Palestinian female prisoners recently are contrary to the agreement reached to end the Freedom and Dignity hunger strike.

Spokesman of the Center, Riyad al-Ashqar, said that many of those in charge of the prisoners' file affirmed that the majority of the prisoners' humanitarian and living demands were achieved following the 40-day hunger strike.

He added that the Israel Prison Service (IPS) has escalated its arbitrary measures against the Palestinian female prisoners since the beginning of the holy month of Ramadan in violation of what was agreed upon between the negotiating committee and the IPS.

These arbitrary measures included raising the prices of the products in the prison's canteen, including the handicraft tools which the IPS prohibited their entry through family visits, in addition to ignoring the prisoners' complaints about the overcrowded cells, the continued humiliation, strip searches and ill treatment, according to Ashqar.

Ashqar pointed out that the female prisoners launched several protest steps to stop these violations including returning the meals provided to them and refusing to go out to the prison yard and threatened to escalate the protest unless the IPS stopped its violations.

The Center called on the organizations that sponsored the agreement between the prisoners and the IPS to follow up the strike's achievements and ensure that the IPS meets the demands agreed upon.
7 june 2017
Israeli police arrest two Jerusalemites

She added that the detention of the two youths was extended pending investigation.
Son of jailed anti-occupation activist kidnapped by Israeli forces

The Israeli occupation forces at dawn Wednesday kidnapped the son of the prominent Hamas leader and anti-occupation activist in Nablus Adnan Asfour.

According to eyewitnesses, several Israeli army patrols stormed Nablus city and cordoned off the home of prisoner Adnan Osfour in al-Makhfiya area before they ravaged the building and kidnapped his son Mohamed, aged 21 and enrolled at An-Najah University.

Violent clashes burst out in the area, where the Israeli soldiers fired bullets and teargas canisters at the Palestinian protesters.

53-year-old Adnan Asfour has been held administratively, without charge or trial, in Israeli jails for 14 months running. He has spent a total of over 12 years in Israeli prisons.
Israeli Soldiers Injure Five Palestinians, Abduct One, In Qalqilia 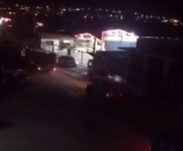 Israeli soldiers invaded, on Wednesday at dawn, Qalqilia city, in the northern part of the occupied West Bank, shot and injured three with live fire, and two others who were hit with bullets’ fragments, and abducted a young man.

Furthermore, the soldiers abducted Mohammad Abdullah Abu Khadija, 29, and took him to an unknown destination.
6 june 2017
Palestinian Resentenced to Life in Prison, 34 Years after Being Released

Israeli authorities have resentenced a Palestinian man to life in prison, the Palestinian Prisoners Society (PPS) reported on Monday, more than 30 years after he was released in a prisoner swap deal.

Yousif Hassan Ahmad Abu al-Kheir, a 74-year-old Palestinian from the coastal city of Akka in Israel, was serving a life sentence in Israeli custody for what Israeli news outlet Ynet called “serious security offenses” when he was released in 1983 as part of a prisoner swap deal between Israel and the Fateh movement, PPS said.

Following his release, Abu al-Kheir’s Israeli citizenship was revoked, and he moved to Greece.

A few years later, he started attempting to recover his Israeli citizenship in order to travel back home and live with his family. In late May, PPS said, Abu al-Kheir’s lawyer notified him that he had been allowed to return to Israel.

However, Ma’an further reports that Israeli authorities detained him when he arrived at the airport, and a special Israeli committee ruled that he serve his life sentence, 34 years after he was released.

Israeli authorities have regularly redetained Palestinians who were released during prisoner exchange deals, in violation of the agreements.

Since a 2011 prisoner swap deal in which Israeli soldier Gilad Shalit was exchanged against more than 1,000 Palestinian prisoners, Israel has initiated mass detention campaigns to bring hundreds of former prisoners back into Israeli custody.

The Hamas movement has repeatedly insisted that Israel must release all prisoners who were freed as part of the Shalit deal and have since been redetained before starting talks of a new prisoner swap deal.

According to prisoners’ rights group Addameer, 6,300 Palestinians were held in Israel as of April, 458 of whom were serving life sentences.
Detention of slain Palestinian’s son extended for investigation

Sbeih, who is currently held in Maskoubia detention center, was arrested at dawn Monday when Israeli police forces violently stormed his family house in occupied Jerusalem.

The Israeli authorities is still holding the body of Sbeih and Ezzedine’s father since he was killed in October last year.
Minor among 12 Palestinians kidnapped by Israeli army at daybreak

At least 12 Palestinians were kidnapped by the Israeli occupation forces (IOF) at daybreak Tuesday in mass abduction sweeps launched across the West Bank and Jerusalem.

The IOF kidnapped 22-year-old Salim Nawawra and Fadi Ghazawi, 22, from their family homes in Bethlehem.

The Israeli forces further stormed the house of the slain Palestinian citizen Mohamed Shahada and his son’s barbershop in Wadi Ma’ali.

At the same time, four Palestinians were kidnapped by the occupation troops from Jerusalem’s refugee camp of Shu’fat.

Karem Saloum was, meanwhile, kidnapped by the Israeli soldiers from Kafr al-Dik, in Salfit.

The campaign culminated in the abduction of four Palestinians, among whom three brothers, from al-Khalil’s northern town of Beit Ummar.

The Israeli occupation forces (IOF) at dawn Monday kidnapped several Palestinian citizens from their homes in different areas of the West Bank and Jerusalem.

The IOF also stormed Burin town, south of Nablus, and deployed soldiers in the vicinity of the bypass road south of the town.

In Qalqilya, Israeli troops were seen at the main entrance to Azzun town and on the nearby bypass road. No arrests have been reported during their presence there.

In Jerusalem, the IOF raided homes in Anata town, east of the holy city, and kidnapped a young man.

Six other Palestinian young men were kidnapped from their homes in IOF raids in different areas of east Jerusalem, ad-Dhahiriya town in al-Khalil, al-Jalazoun refugee camp in Ramallah, and Taqua town in Bethlehem.
Many Palestinians Injured By Israeli Gas Bombs, One Abducted, Near Ramallah

Israeli soldiers invaded, on Monday at dawn, the al-Jalazoun refugee camp, north of the central West Bank city of Ramallah, and fired many gas bombs, causing several Palestinians from the same household, to suffer the effects of teargas inhalation.

The wounded siblings received treatment by local medics, and were all transferred to the Palestine Medical Complex.
Page:  3 - 2 - 1
Powered by