The sources pointed out that administrative detention orders were issued against eight Palestinian prisoners from al-Khalil, six from Ramallah, four from Bethlehem, six from Tulkarem and Jenin, two from Jericho, and one prisoner from Nablus.

Administrative detention is the imprisonment of Palestinians without charge or trial and on the basis of secret evidence for up to six month periods, indefinitely renewable by Israeli military courts.

Palestinian detainees have continuously resorted to open-ended hunger strikes as a way to protest their administrative detention and to demand an end to this policy, which violates the international law.
Israeli Soldiers Abduct Nine Palestinians In Hebron, Bethlehem, Nablus And Qalqilia

Updated: Israeli soldiers invaded, on Thursday at dawn, many Palestinian homes in the West Bank governorates of Hebron, Bethlehem, Nablus and Qalqilia, and abducted nine Palestinians, the Palestinian Prisoners’ Society (PPPS) has reported.

The Hebron office of the PPS, in the southern part of the occupied West Bank, said the soldiers abducted four Palestinians, including former political prisoners. They have been identified as Anas Ibrahim Shadeed, Morad Qawasmi, Mahmoud al-‘Oweiwy and Safwat al-Ja’bari.

They have been identified as Anas Ibrahim Shadeed, Morad Qawasmi, Mahmoud al-‘Oweiwy and Safwat al-Ja’bari.

In Bethlehem governorate, the soldiers invaded Beit Sahour, east of the city, and abducted Raed Ibrahim Obeyyat, 38, from his home, after breaking into it and searching it.

Also in Bethlehem, the soldiers abducted Bilal Ismael Masalma and Ahmad Obeidallah, from their homes in the city.

Furthermore, the soldiers invaded Qalqilia city, and nearby Azzoun town, in northern West Bank, and abducted Jamal Jamil Daoud, 20, and Yahya Abdul-Salam Salim, after breaking into their homes and searching them.

According to the prisoners’ committee, Alawi was arrested in 2002 and is expected to spend his last year in occupation jails.

Prisoner Alawi was arrested by the Israeli forces on claims of carrying out an anti-occupation bombing near Hawara military checkpoint, south of Nablus, in the northern occupied West Bank.
Israel indicts youth activists for defending 3rd holiest site in Islam

The Israeli police arrested several members of "Shabab al-Aqsa" on charges of maintaining vigil at al-Aqsa Mosque and thwarting Israeli break-ins at the site.

13 members of Shabab al-Aqsa Organization, which promotes Muslims’ sovereignty over al-Aqsa Mosque and the right to the freedom of worship, were recently arrested by the Israeli forces.

The members have been charged with being involved in campaigns to prevent break-ins from taking place at the holy site and organizing trips to Yafa and visits to ex-prisoners. The indictments also included the arrestees’ involvement in delivering lectures on Israel’s abduction and investigation tactics.

Lawyer Mufeed al-Haj, from the Palestinian Prisoners Society, said the 13 arrestees have been subjected to intensive interrogation in al-Mascoubiya detention center.

The young men were further charged with making a WhatsApp group comprising 22 members to circulate pieces of information on settler break-ins at al-Aqsa and on newly-released Palestinian detainees.

According to the lawyer, the campaign makes part of Israeli attempts to outlaw anti-occupation groups in Occupied Jerusalem and chase down activists and sit-inners at al-Aqsa Mosque so as to impose a new fait accompli at the site.

Lawyer al-Haj added that in August 2011 the Israeli Interior Security minister blacklisted Shabab al-Aqsa group as an outlawed body. 15 Palestinian youths were arrested at the time, one among whom was sentenced to 12 months in jail for being a member of the organization. The others were sentenced to three months

Head of the committee of Jerusalemite prisoners’ families, Amjad Abu Asab, also said the campaign against Shabab al-Aqsa youth amounts to an assault on holy al-Aqsa Mosque and Muslims’ freedom of worship at the site.
IOF kidnaps Palestinian from Kafr Dan town

The Israeli occupation forces (IOF) on Wednesday night kidnapped a Palestinian citizen from Kafr Dan town, west of Jenin in the West Bank, and set up a makeshift checkpoint on the Jenin-Haifa road.

Local sources told the Palestinian Information Center (PIC) that Israeli soldiers placed barriers on the Jenin-Haifa road and embarked on intercepting cars and checking the IDs of passengers.

They added that soldiers were also stationed at the main entrance to Kafr Dan town in Jenin, where they rounded up a Palestinian citizen identified as Ihab Radhi and took him to an undeclared place.
14 june 2017
IOF arrests 6 Palestinians in predawn raids

The Israeli Occupation Forces (IOF) arrested overnight and at dawn Wednesday six Palestinians during violent raids throughout the West Bank.

In Bethlehem, IOF stormed early today al-Doheisha refugee camp, south of the city, and broke into a number of local houses. At least two ex-prisoners were detained during the raids which led to the outbreak of violent clashes.

Similar raids were also reported in the nearby Hussan town, west of Bethlehem city, where a young man was rounded up, while another was arrested in Qalqilia.

Teargas suffocation cases were reported during the clashes.

Dozens of Palestinian citizens suffered from inhaling tear gas during clashes on Tuesday night with the Israeli occupation forces (IOF) in Misilyah town, east of Jenin city in the West Bank.

Local sources told the Palestinian Information Center (PIC) that Israeli soldiers stormed the town and fired volleys of tear gas grenades at local young men during skirmishes with them in different areas of the town.

The sources said that young men confronted the soldiers and showered them with a hail of stones, pointing out that one young man was rounded up and bundled into a military vehicle during the events.
13 june 2017
IOF removes prisoner’s photos few hours prior to his release

Few hours prior to the release of prisoner Ibrahim Atiya, who has been detained for 13 years, Israeli Occupation Forces (IOF) on Tuesday stormed his home in al-Khalil city and removed all of his photos, Palestinian flags, and welcome back posters fixed by the family and Palestinian factions.

Ahmad Atiya, Ibrahim’s brother, pointed out that the IOF soldiers threatened the family to re-storm the house in case any photos or posters for their released son were posted.

Prisoner Atiya, 42, was arrested on June, 14, 2004. He was transferred to several Israeli jails during his detention period. Atiya is going to be received at al-Thahiriya barrier to the south of al-Khalil.
IOA extends administrative detention order against Jaabari

He was held more than once in Israeli jails and served over 15 years of imprisonment mostly under repeated administrative detention orders.

He also participated in an open hunger strike that lasted for 61 consecutive days against the illegal administrative detention order in 2014.
Arrests reported as clashes erupt throughout West Bank

Violent clashes broke out early today when IOF stormed the northern West Bank city of Tulkarem and its refugee camp. Two arrests were reported during the raid including a Hamas leader.

Locals affirmed to the PIC reporter that IOF soldiers were deployed in large numbers throughout the camp amid heavy firing of teargas bombs and live ammunition which led to the outbreak of the clashes.

During the raid, IOF arrested the leader in Hamas Movement Adnan al-Husari after storming and violently searching his house.

The ex-prisoner Fadi al-Amouri was also detained during the clashes.

Similar clashes erupted in Jalazoun refugee camp in Ramallah where a young man was arrested.

In occupied Jerusalem, two brothers were rounded up as Israeli police stormed their family house in Silwan town south of al-Aqsa Mosque.

The Israeli occupation forces (IOF) arrested a Palestinian young girl near the Ibrahimi Mosque in al-Khalil city on Monday evening after allegedly finding a knife in her possession.

Local sources told the Palestinian Information Center (PIC) that the soldiers at the southern checkpoint of the Ibrahimi Mosque stopped and searched 28-year-old Manal Abu Ali and found a knife with her.

The IOF claimed the girl was interrogated and confessed to intending to stab a soldier.
Three Prominent Palestinian Organizers, Journalists Ordered to Further Imprisonment without Charge or Trial

Fadayel, 37, has been imprisoned for 18 months under administrative detention; this is the fourth time the order against him has been renewed. He has spent over seven years in total in Israeli prisons and was ordered to another four months of imprisonment without charge or trial.  He was hit with another four-month detention order on Wednesday,  7 June.

Haneen Nassar, Fadayel’s wife and an organizer with the Palestinian Prisoners’ Committee, a popular organization in Palestine that works to support the prisoners’ struggle and demand their freedom, said that she and her husband have never been able to enjoy a free and safe life since their marriage. Fadayel has been arrested repeatedly; they marked their engagement while he was imprisoned. She noted that their daughter, Mays, 10, has not seen her father in their home for nearly half of her life.

Fadayel is well-known in Ramallah as a leader in the Popular Front for the Liberation of Palestine, the Palestinian leftist political party. Nasser noted that his administrative detention has been repeatedly renewed under the pretext of a “secret file;” all of the appeals of his lawyer have been rejected.

Over 50,000 administrative detention orders have reportedly been issued since 1967; the practice dates from the colonial British mandate over Palestine and was re-imposed by the Israeli occupation. 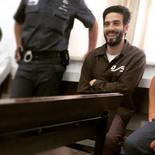 Meanwhile, Hasan Safadi, Palestinian journalist and the Arabic media coordinator of Addameer Prisoner Support and Human Rights Association was also ordered on 8 June 2017 to another six months in administrative detention by an Israeli occupation military court. He had been scheduled for release on 8 June, but was instead hit with another arbitrary detention renewal.

Safadi, 26, has been imprisoned since 1 May 2016, when he was seized by Israeli occupation forces as he crossed the Karameh/Allenby bridge between Jordan and Palestine, returning from an Arab youth conference organized in Tunisia. After 40 days of interrogation in the Moskobiyeh interrogation center, he was ordered to administrative detention without charge or trial, which has since been renewed twice. His new administrative detention order is scheduled to expire on 8 December 2017.

Hassan Karajah, a prominent youth activist with the Stop the Wall Campaign and a boycott, divestment and sanctions (BDS) activist, was seized by Israeli occupation forces on 12 July 2016 at a military checkpoint west of Ramallah. He has been held under administrative detention without charge or trial since that time; his detention was also renewed on 7 June 2017 for the third time for a four-month period.

Karajah was previously arrested on 23 January 2013 and freed on 19 October 2014, accused of participation in a prohibited organization and contact with an enemy state, an allegation frequently used to target Palestinians who travel to conferences and events in Lebanon and other Arab countries.