Dozens of Israeli soldiers invaded, on Tuesday at dawn, the Deheishe refugee camp, south of the West Bank city of Bethlehem, in the occupied West bank, and clashed with dozens of local youngsters, before shooting and injuring eight Palestinians, including a medic, and abducted a young man.

The invasion into the refugee camp was carried out by dozens of soldiers, and several armored military jeeps, before the soldiers stormed homes and violently searched them, causing damage.

The soldiers also fired many live rounds, rubber-coated steel bullets, gas bombs and concussion grenades at the Palestinians and their homes.

Medical sources said the soldiers fired a live round, from a close range, at medics working with the Palestinian Medical Relief, wounding one in the leg, before invading his home and ransacking it, in addition to attacking his father and abducting his brother.

The soldiers also shot and injured five Palestinians with live rounds, in their legs, and one with a rubber-coated steel bullet, during the clashes that erupted in the refugee camp.

In related news, several army vehicles invaded the al-‘Obeyyat area, east of Bethlehem, searched homes and summoned a young man, identified as Khalil Mohammad Obeyyat, for interrogation at the Etzion military base and security center, south of Bethlehem.

The soldiers also invaded and ransacked the family home of Hussein Obeyyat, who was assassinated by the Israeli army in 2000.
Israeli Soldiers Abduct Three Palestinians In Hebron

Israeli soldiers abducted, on Tuesday at dawn, three young Palestinian men from their homes, in Beit Ummar town, north of Hebron, in the southern part of the occupied West Bank.

It is worth mentioning that Mohye is the son of Falah Hamdi Abu Mariya, 53, who on Thursday July 23rd 2015, was shot dead by Israeli soldiers who stormed his home, and injured two of his sons, identified as Mohammad and Ahmad.

Falah was trying to help his son, Mohammad, after he was shot in the pelvis, but the soldiers fired two live rounds at his chest, instantly killing him.

Furthermore, clashes erupted in the town between the invading soldiers and local youngsters, who hurled stones and empty bottles on the military vehicles, while the soldiers fired many concussion grenades and gas bombs, including some that were directly fired at homes.
Israeli Soldiers Abduct Two Palestinians In Abu Dis

Many armored military jeeps invaded the town, approximately at 4 at dawn, before the soldiers stormed the home of former political prisoner Mahmoud Nafeth Jaffal, 20, and violently searched the property, causing excessive damage.

The soldiers then abducted Mahmoud, and confiscated his mobile phone, before moving him to an unknown destination.

Mahmoud is a former political prisoner who was abducted and imprisoned by Israel several times before. His most recent release from detention was in 2015.

The soldiers also invaded the family home of Mohammad Ziad Jaffal, 18, and ransacked the property, causing damage, before abducting him.

The invasion into Abu Dis led to clashes between the soldiers and dozens of local youths, who hurled stones and empty bottles at the military vehicles, while the soldiers fired dozens of rubber-coated steel bullets, gas bombs and concussion grenades.

The soldiers withdrew from the town and headed to a military base that was built on Palestinian lands, in Abu Kamel Mountain area, in Abu Dis.

A number of Palestinian civilians were kidnapped by the Israeli occupation forces on Monday in an arbitrary abduction sweep rocking Jerusalem’s town of Silwan.

The captives were dragged to unidentified destinations handcuffed and blindfolded.

The campaign coincides with the second day of holy Eid al-Fitr, marked by millions of Muslims around the world.
25 june 2017
Minors among three Palestinians arrested in Bethlehem

The Israeli Occupation Forces (IOF) arrested Sunday three Palestinians, including two minors, after breaking into their family houses in Bethlehem to the south of West Bank.

According to the PIC reporter, IOF arrested a young man from Taqu'a town and two minors aged 15 and 17 from Beit Fujar town to the south of Bethlehem.

IOF soldiers violently searched the detainees’ houses during the raid before taking them blindfolded and handcuffed to unknown detention centers.
Palestinian kidnapped by Israeli forces at Jerusalem checkpoint

The Israeli occupation forces (IOF) on Saturday evening kidnapped a Palestinian citizen as he passed through a military checkpoint set up in Occupied Jerusalem.

A PIC news correspondent quoted local sources as stating that Najeh Habaybeh was kidnapped by the occupation soldiers on his way back home from Occupied Jerusalem.

At predawn time, a number of Muslim worshipers and sit-inners were kidnapped by the Israeli forces on their way to Occupied Jerusalem—home to al-Aqsa Mosque, the third holiest site in Islam.
Israeli Soldiers Abduct A Palestinian Near Jenin 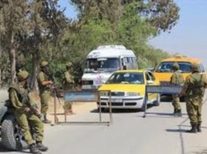 Israeli soldiers abducted, on Saturday evening, a former Palestinian political prisoner from Sanour town, near Jenin, in the northern part of the occupied West Bank.

The PPS added that Habayba was previously abducted by Israel, and was held captive for seven and a half years.

Several Palestinian citizens suffered injuries during clashes with the Israeli occupation forces (IOF) at dawn Saturday in different areas of Bethlehem city in the West Bank.

Local sources reported that one young man suffered a rubber bullet injury in his belly while many others suffered from inhaling tear gas during skirmishes with Israeli soldiers near Othman Bin Affan Mosque east of Bethlehem.

Similar clashes also broke out between young men and soldiers in other areas of Bethlehem.

The soldier showered the young protesters and nearby homes with tear gas and many suffered suffocation as a result.

They added that the soldiers kidnapped a citizen called Izz Hardan from his home in the camp.

Meanwhile, Israeli soldiers at a military checkpoint kidnapped on the same day a Palestinian citizen as he was heading for Occupied Jerusalem. He was identified as Ahmed al-Attrash from Kafr Ra’i village in Jenin.
Palestinian lawyer on hunger strike for 17 days

Palestinian prisoner and lawyer Muhammad Allan entered his 17th day of hunger strike in Israeli jail on Saturday, in protest at his recent re-detention by Israeli occupation forces on June 8.

Family sources affirmed that Allan launched his strike on June 8, the day he was detained  in his hometown village of Einabus in Nablus province during a predawn raid.

Allan was released from prison in November 2015 after a year-long stint in administrative detention, Israel’s widely-condemned policy of internment without charge or trial, during which time he endured a 65-day hunger strike in protest against his detention.
​
He was previously imprisoned for three years in two separate arrests for being allegedly affiliated with the Islamic Jihad Movement.
3 Palestinian prisoners enter new years in Israeli prison

Palestinian prisoner Ahmed Basharat, 42, from the city of Tubas in the northern occupied West Bank, entered another year in prison. He is serving a life sentence following since detention in 2003.

Prisoner Ibrahim Salama, from Jenin, was detained in 2003 and sentenced to life in Israeli prison.

Prisoner Rabi’I Malaysha, also from Jenin, was detained in 2003 and sentenced to 30 years in Israeli prison.

Both of them enter today a new year in prison after spending 14 years of their total prison sentences.

Since 1967, when Israeli forces took control of the West Bank and Gaza, at least 800,000 Palestinians have been detained by Israel, making up 20 percent of the total Palestinian population in the occupied territory, according to Addameer.
​
Some 40 percent of the male Palestinian population in the occupied territory has been detained by Israeli forces at some point in their lives, the group estimated.
23 june 2017
Israeli court extends detention of Palestinian martyr’s mother

An Israeli military court on Thursday morning extended the detention of a Palestinian mother, whose son, Adel Ankoush, was killed along with two other young men in the recent Jerusalem operation.

According to the Palestinian Prisoner Society, the military court in Ofer jail extended for one week the detention of 46-year-old Zainab Ankoush, the mother of martyr Adel, a resident of Deir Abu Mash'al town in the Ramallah and al-Bireh province.

Accordingly, she will remain in prison until next Thursday at the pretext of giving Israeli investigators more time to interrogate her.

The mother of martyr Adel was kidnapped from her home in Deir Abu Mash’al on Wednesday.

Last Friday, her son Adel and two of his friends carried out a commando operation in the Old City of Occupied Jerusalem, killing one Israeli female soldier and injuring a male officer.
Soldiers Abduct A Palestinian From Jenin

Israeli soldiers abducted, late on Thursday at night, a Palestinian from the al-Jalama village, northeast of the northern West Bank city of Jenin.

The Jenin office of the Palestinian Prisoners’ Society (PPS) said the soldiers abducted a young man, identified as Tareq Sha’ban, after stopping him at the Za’tara military roadblock, south of Nablus, also in northern West Bank.

The Palestinian was cuffed and blindfolded, before the soldiers moved him to a nearby military base.
Israeli Soldiers Abduct Two Palestinians In Qalqilia

Israeli soldiers abducted, on Friday at dawn, two Palestinian men from their homes in Qalqilia city, in the northern part of the occupied West Bank. The soldiers also summoned a Palestinian, from Bethlehem, for interrogation.

In addition, the soldiers invaded Marah Rabah village, south of Bethlehem, and summoned Mahmoud Sheikh, 31, for interrogation at the nearby Etzion military base and security center, after violently searching his home.
22 june 2017
Army Injures 29 Palestinians Near Jerusalem, Abduct One Near Jenin

Israeli soldiers invaded, on Wednesday at night, Abu Dis town, east of occupied East Jerusalem, and clashed with local youths, wounding three with rubber-coated steel bullets, and causing twenty-six others to suffer the severe effects of teargas inhalation. The soldiers also abducted one Palestinian near Jenin.

The Palestinian Red Crescent in occupied Jerusalem said its medics rushed to Abu Dis town, and providing the needed treatment to three Palestinians, who were shot with rubber-coated steel bullets, and 26 others who suffered the severe effects of teargas inhalation.

In addition, the soldiers installed a military roadblock on the main Jenin-Nablus road, searched many cars and interrogated many Palestinians while inspecting their ID cards, before abducting a young man, identified as Amjad Jamal Milhem, 22.

The Palestinian was on his way back home in Kufur Ra’ey town, south of Jenin, in the northern part of the occupied West Bank.
5 Palestinians kidnapped by IOF on Laylat al-Qadr

Five Palestinian civilians were kidnapped by the Israeli occupation forces (IOF) from the West Bank and Jerusalem at predawn Thursday.

The IOF arrested three Palestinian young men, from the West Bank, in al-Tour neighborhood and transferred them to an unidentified destination after they handcuffed them.

Overnight, the occupation forces turned Jerusalem neighborhoods into military zones and cracked down on Palestinian youths heading to al-Aqsa Mosque to mark Laylat al-Qadr (the Night of Decree).

22-year-old Palestinian youth Amjad Milhem was arrested by the occupation soldiers at a military checkpoint set up between southern Jenin and Nablus.

Palestinian ex-prisoner Anas Shedid, aged 20, was re-arrested on the same day, three weeks after he was released from Israeli lock-ups, following a 90-day hunger strike to protest administrative detention, without charge or trial.