Palestinian Prisoners Society’s lawyer Firas al-Sabbah, revealed that the Palestinian female detainee Suzan al-Uwaiwi, 40 from al-Khalil, was subjected to a harsh and intense investigation in Ashkelon Israeli jail since day one of her arrest.

The lawyer elaborated that the captive, who was arrested on June 05, was tortured inside jail leading to the deterioration of her health condition. She is suffering from acute kidney pain for which she needs urgent treatment.

In a similar context, Israeli military court in Ashkelon extended the detention of another female detainee from al-Khalil, Safa Abu Esnaineh, until next Monday. She has been imprisoned since June 17.
Rally held in Bethlehem to urge release of Palestinian hunger striker

A rally was staged in Bethlehem on Friday in solidarity the hunger-striking Palestinian detainee Hasan Shawka.

Israeli soldiers abducted, Friday, a young Palestinian man from his home in Bani Neim town, east of Hebron city, in the southern part of the occupied West Bank.

The soldiers invaded the town, before storming and ransacking many homes, casing anxiety attacks among the children, and abducted Mousa Mohammad Zeidat.

The army also installed temporary roadblocks in the town, and around it, before stopping and searching dozens of cars.
Clashes erupt following West Bank overnight raids

Violent clashes broke out at dawn Friday throughout West Bank shortly after Israeli Occupation Forces (IOF) carried out overnight raids in the area.

In Bethlehem, an Israeli military officer was slightly injured as clashes erupted in Dheisheh refugee camp. The confrontation broke out when IOF arrested a local young man and his uncle.

A protestor was shot and injured by three rubber-coated steel bullets in the chest. He was rushed to a Bethlehem hospital, where medics described his condition as stabe.

In occupied Jerusalem, Israeli police brutally attacked a Palestinian child before being arrested to be then held in house arrest for five days. 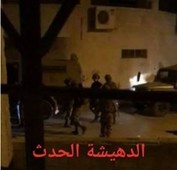 Dozens of Israeli soldiers invaded, on Friday at dawn the Deheishe refugee camp, south of the West Bank city of Bethlehem, shot a young man with three rubber-coated steel bullets, and abducted another from his home.

They stated that the soldiers shot a young man with three rubber-coated steel bullets in his chest, before he was rushed to a hospital in Bethlehem, suffering moderate-but-stable wounds.

It is worth mentioning that one soldier was injured, earlier at dawn, during protests that took place when the army invaded the refugee camp.

The army said dozens of Palestinians hurled stones and Molotov cocktails at the military vehicles, wounding one soldier, who was rushed to an Israeli hospital for treatment.

Updated From:
One Israeli Soldier Injured During An Invasion In Deheishe

One Israeli Soldier Injured During An Invasion In Deheishe

One soldier was injured, on Thursday at dawn, during protests that took place after dozens of soldiers invaded the Deheishe refugee camp, south of Bethlehem in the occupied West Bank, and abducted one Palestinian.

The army said dozens of Palestinians hurled stones and Molotov cocktails at the military vehicles, wounding one soldier, who was rushed to an Israeli hospital for treatment.

During the invasion, the soldiers searched many homes, and abducted a young man identified as Odai Shehada, before moving him to Etzion military base and security center, south of Bethlehem.

It is worth mentioning that the soldiers also abducted Odai’s uncle, Jamal Shehada, but released him a few hours later.

Five Palestinians were shot and injured and five others were apprehended by Israeli occupation forces (IOF) after clashes with Palestinian youths had erupted in Beit Fujjar town south of Bethlehem.

Security sources told WAFA news agency that the clashes broke out after a large force of the IOF raided the town and conducted a large-scale storming campaign into Palestinian homes.

Director of the Palestinian Red Crescent Society (PRCS) emergency department in Bethlehem Mohammed Awad said that the youths were moderately wounded after being shot by “Toto” bullets in the lower parts of their bodies. They were moved to hospitals in al-Khalil for treatment.
IOF arrests 40 workers in Tulkarem

The spokesperson of Israeli occupation forces (IOF) announced on Thursday the arrest of 40 Palestinian workers while attempting to cross the security Separation Wall between Tulkarem city in the West Bank and 1948 Occupied Palestine, without having work permits.

He added that the workers were caught on high technical monitoring devices. They were all transferred to investigation centers.
Anti-occupation cell arrested by Israeli forces

According to a statement released by a police spokesperson Thursday afternoon, officers operating in the vicinity of Bethlehem arrested six suspects.

The suspects are believed to have breached the Jerusalem separation fence.

The Palestinian Prisoners’ Society (PPS) has reported that Israeli soldiers abducted, overnight until early morning hours Thursday, twenty Palestinians, including a child, from their homes in several parts of the occupied West Bank, including Jerusalem.

One of the abducted Palestinians is an author, intellectual and human rights activist, former political prisoner Rassem Obeidat.

Obeidat was summoned for interrogation in the al-Maskobiyya detention and interrogation facility and was abducted shortly after arriving there.

He was among several Palestinians who were held, and interrogated, last Monday, after a large police force and intelligence officers invaded a hall of the Ambassador Hotel, in occupied East Jerusalem and attacked a celebration held by the Palestinian Russian Friendship Society.

Israeli soldiers abducted at dawn Thursday and late on Wednesday at night, two Palestinians, including a writer and activist, from their homes in occupied East Jerusalem.

The soldiers invaded the home of Abdullah al-Kiswani, a former member of the Palestinian Football Association, in the at-Tour neighborhood overlooking the Old City of Jerusalem, and abducted him, after searching his home.

Obeidat was summoned for interrogation in the al-Maskobiyya detention and interrogation facility, and was abducted shortly after arriving there.

It is worth mentioning that he was among several Palestinians who were held, and interrogated, last Monday, after a large police force and intelligence officers invaded a hall of the Ambassador Hotel, in occupied East Jerusalem and attacked a celebration held by the Palestinian Russian Friendship Society.
Army Abducts Ten Palestinians In Nablus, Bethlehem And Hebron

Israeli soldiers abducted, on Thursday at dawn, ten Palestinians in the West Bank governorates of Nablus, Bethlehem and Hebron, after the army stormed and violently searched many homes.

Another Palestinian, identified as Mohammad Naim Taqatqa, 24, was abducted from his home in Beit Fajjar town, south of Bethlehem.

Israeli soldiers demolished, late on Wednesday at night, the home of a Palestinian detainee, who is imprisoned on charges of crashing into a military roadblock on March 17, 2018, killing two soldiers.

The Israeli army has claimed that Ala’ Rateb Kabaha, 26, deliberately rammed soldiers at the military roadblocks, killing Lieutenant Ziv Daus, 21, from Azur town near Tel Aviv, and Sergeant Netanel Kahalani, 20, from Elyakim Moshav, in the Megiddo Regional Council, in the northern part of the country.

They added that the Kabaha family lives on the third floor of a four-story building, owned by Ala’s father. The soldiers demolished the interior of the 150 square/meter apartment.

The destruction of the interior walls caused structural damage, which may result in the entire building needing to be torn down.

It is Israeli policy to engage in ‘punitive demolitions’ of the homes of Palestinians who are charged with crimes against the Israeli military occupiers. The army claims that the demolitions of the family homes act as a ‘deterrent’ against future attacks, but there is no evidence to support this claim.

In addition, the demolition of the homes of family members of those accused of crimes is considered a violation of international law, as it is a form of collective punishment.

It is worth mentioning that the family only received the official demolition order two weeks ago.
20 june 2018
Palestinian prisoner severely tortured in Israeli jail

The lawyer of Detainees and Ex-detainees Committee, Karim Ajwa, said that the Palestinian prisoner Islam Abu Hamid, 32 of al-Amari refugee camp in Ramalah, has been subjected to a harsh assault and torture including humiliation at the hands of Israeli investigators in al-Maskobiya detention center.

The committee on Wednesday quoted the Palestinian captive as affirming that Israeli forces blindfolded his eyes, tied his hands and deprived him of sleep amid cursing and threatening in order to force him confess the charge brought against him.

Israeli forces arrested Abu Hamid two weeks ago and accused him of killing an Israeli soldier during the Israeli occupation raid on al-Amari refugee camp.

Prisoner Abu Hamid has four brothers who are sentenced to life imprisonment in Israeli prisons in addition to a fifth martyr brother who was killed by Israeli forces.
Israeli Soldiers Abduct Twenty Palestinians In The West Bank

The Palestinian Prisoners’ Society (PPS) has reported that Israeli soldiers abducted, on Wednesday at dawn, twenty Palestinians from their homes in several parts of the occupied West Bank.

The soldiers conducted very violent searches of dozens of homes, and interrogated many Palestinians, before abducting twenty, and took them to various detention and interrogation centers.