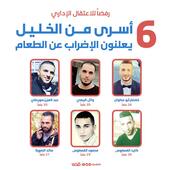 Six Palestinian prisoners, rejailed after their release, have been on hunger strike for about five days in protest at their detention administratively in Ofer and Negev prisons.

According to Palestinian media sources, among the hunger strikers are two brothers from Dura town in al-Khalil called Mahmoud and Kayed al-Fasfous.

The Israeli occupation intelligence kidnaped Mahmoud al-Fasfous, aged 29, on August 3, 2018 after summoning him for interrogation at the Etzion police station in the north of al-Khalil.

Three weeks later, Mahmoud was sent to administrative incarceration for six month before his detention was extended for another six months upon his completion of the first term.

He had been arrested several times by the Israeli occupation forces (IOF) and spent a total of eight years in their jails.

On the same day, August 3, the IOF arrested his 30-year-old brother Kayed following a raid on his home in Dura town and jailed him administratively for six renewable months. Later, his detention was extended to four months upon his completion of the first term.

The two brothers are now locked up in isolation cells of Ofer jail.

Four other prisoners from different areas of al-Khalil have also been on hunger strike for about five days in protest at their administrative detention, with no trial or indictment.

The Palestinian Prisoners’ Society (PPS) has reported that Israeli soldiers abducted, on Thursday, at dawn, at least nine Palestinians, including former political prisoners, from their homes, in several cities, towns and refugee camps across the occupied West Bank.

It added that the soldiers also detained Morad Tawalba for several hours, before releasing him.

In addition, the soldiers invaded and searched homes in Kobar town, west of the central West Bank city of Ramallah, before abducting two former political prisoners, identified as Yahia Mahmoud Amriyya, and Qassam Majd Barghouthi, who was only released from prison three days ago.

During the invasion into Kobar, the soldiers attacked many Palestinian protesters, and fired several gas bombs and concussion grenades at them, in addition to surrounding homes and buildings.

Furthermore, the soldiers invaded Beit Ummar town, north of the southern West Bank city of Hebron, and searched many homes.

The soldiers also abducted a former political prisoner, identified as Mahmoud Mohammad Abu Warda, from his home in the al-Fawwar refugee camp, south of Hebron.

The sources added that the soldiers also detained Morad Tawalba for several hours, before releasing him.

Many Palestinians protested the invasion, and the abduction of the Palestinians, before the soldiers fired many gas bombs and concussion grenades, causing many to suffer the effects of teargas inhalation.

Israeli soldiers abducted, on Tuesday evening and night, and earlier on Wednesday at dawn, at least sixteen Palestinians from their homes, in several parts of the occupied West Bank, the Palestinian Prisoners’ Society (PPS) has reported.

During the invasion, the soldiers also injured a young Palestinian man, after ramming him with their jeep.

In Jenin, in northern West Bank, the soldiers abducted Montaser Rabay’a, from his home in Methaloon town.

It is worth mentioning that Abu Sil is a former political prisoner, who was abducted and detained several times, and was one also shot and injured by the soldiers.

Several Israeli military jeeps invaded, earlier Wednesday, the al-Am’ari refugee camp, in Ramallah in central West Bank, before the soldiers rammed one Palestinian with their jeep during protests that took place when the army invaded it, and abducted six Palestinians from their homes.

Media sources said the soldiers fired a barrage of gas bombs and rubber-coated steel bullets at the Palestinian protesters, wounding six of them, before they received the needed treatment.

The sources added that the soldiers fired a barrage of gas bombs in many directions, some striking homes and stores.

In addition, the soldiers wired and detonated the door of one store, broke into a carpentry workshop, and caused damage to many machines.
Israeli Navy Injures A Palestinian Fisherman, Abducts Three

Israeli navy ship attacked, late on Tuesday at night, Palestinian fishing boats in Gaza territorial waters, close to the shore in Rafah, in the southern part of the Gaza Strip, before ramming one of the boats and crashing it, wounding one fisherman, and later opened fire other boats, causing damage, before abducting three.

Zakariya Abu Bakr, the coordinator of the Palestinian Fishermen’s Syndicate, said one of the navy ships chased and rammed into a Palestinian fishing boat, damaging it and wounding one fisherman, identified as Mohammad Nahhal.

Palestinian fishermen managed to rescue the wounded fisherman, before he was rushed to Abu Yousef Najjar hospital, in Rafah, and towed his boat back to the shore.

Abu Bakr added that the navy also abducted one fisherman, identified as Hazem an-Nada, before other fishermen towed his boat back to the shore.

Shortly afterwards, the navy fired many live rounds at another fishing boat, causing damage to its motor, before abducting two fishermen, who were onboard, identified as Mohammad Nidal Ayyash and Mos’ab Nidal Ayyash.
25 june 2019
Army Abducts Four Children In Hebron

Israeli soldiers abducted, on Tuesday afternoon, four Palestinians children, and injured several other residents, in Hebron city, in the southern part of the occupied West Bank.

Media sources said the soldiers stopped the four children, whose names were unknown at the time of this report, in the center of the city, and abducted them, before taking them to a nearby military center.

The soldiers also fired many gas bombs and rubber-coated steel bullets during protest that erupted after the soldiers abducted the children; many Palestinians suffered the effects of teargas inhalation.
IOF raids homes, arrests 9 Palestinians in West Bank

Local sources reported that the IOF kidnapped 9 Palestinians from their homes in Nablus, Bethlehem, Ramallah and Jerusalem.

Violent clashes broke out between Palestinian residents and IOF soldiers during raids on Qalandiya and Jenin refugee camps.

Meanwhile, the IOF broke into the home of the Hamas MP Nayef Rjoub in al-Khalil and handed him an order to appear before the Israel Intelligence Service for interrogation.
Israeli army post attacked with bombs in Jenin

The attack did not result in casualties among Israeli soldiers, the website claimed

Consequently, a manhunt for the attackers were launched by the Israeli occupation army. A 16-year-old boy suspected of being involved in the attack was reportedly arrested.

On June 14, the same army checkpoint was exposed to a similar attack by Palestinian youths.
Army Abducts A Palestinian In Al-‘Isawiya

Israeli soldiers abducted, on Monday evening, a young Palestinian man from the al-‘Isawiya town, in the center of occupied East Jerusalem, and took him to an interrogation facility in the city.

Eyewitnesses said the young man, identified as Wadea’ ‘Oleyyan, was walking in the town, when the soldiers abducted him, and added that the situation was calm, and no protests were taking place.

In addition, the soldiers installed military roadblocks on all roads leading to the town, stopped and searched Palestinian cars, and interrogated many residents while inspecting their ID cards.