20 mar 2017
Arresting three children from the village of Esawyeh 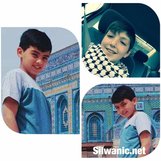 The occupation forces arrested on Monday early morning three children from the village of Esawyeh and transferred them for interrogation at Salah Eddin Street police station in the city.

The detainee Akram Fseisi, from al-Khalil’s western town of Idna, started his hunger strike on Monday in protest at a renewed administrative term issued by the Israeli prison authorities against him with neither charge nor trial.

A PIC news correspondent quoted Fseisi’s family as stating that the detainee announced his hunger strike after the Israeli prison authorities renewed his six-month administrative sentence for the second consecutive time.

Fseisi was re-arrested by the Israeli occupation forces on September 19, 2016 and has been held in an isolated cell in the Ofer military lock-up.

The other detainee Rafat Shalash, from al-Khalil’s southern town of Beit Awa, has also been on a hunger strike for the fifth day running in response at being held administratively in an Israeli jail for the 15th consecutive month.

The detainee’s father, Hussein Shalash, said his son has been incarcerated in Israeli lock-ups since January 14, 2016 without charges and that he had spent a total of seven years in Israeli prisons.

The father appealed to the national and international human rights institutions to work on releasing his son from the Israeli Negev jail before the end of his administrative sentence, slated to be terminated on April 14.

At least 7,000 Palestinian detainees are locked up in Israeli jails, among whom 700 prisoners held administratively with neither charge nor trial.
IOF sets up barrier, arrests two Palestinians near Qalqilya

Israeli Occupation Forces (IOF) arrested two Palestinian young men from Qalqilya city and released them hours later on Monday night.  The IOF soldiers questioned both men at the makeshift barrier that was erected at the road between Qalqilya and Ezbet al-Tabib hamlet.

Local sources told the PIC reporter that Israeli soldiers stopped a Palestinian car and detained the two men for a while then removed the checkpoint.

The IOF troops were deployed in the vicinity of Azzoun town. They erected a military checkpoint on the nearby tunnel road, the sources added.
IOA renews house arrest on 73-year-old activist

According to the Israeli order, Ghaith’s travel ban into the West Bank has been once again extended.

Ghaith was first denied entry into the West Bank in 2011.

Ghaith, who is one of the founders of Dameer institution for human rights, is also banned from traveling abroad since 2012 for allegedly posing a threat to “state security”, although no evidence is given to support such claim.

The rights activist spent more than eight years in Israeli jails including a year in administrative detention.

Relatives of Palestinian prisoners from the besieged Gaza Strip left the coastal enclave Monday morning through the Erez checkpoint after they were granted permission to visit their relatives being held in Israel’s Nafha prison.

International Committee of the Red Cross (ICRC) spokesperson in Gaza Suheir Zaqout said that 59 Palestinians from Gaza visited 35 Palestinian prisoners held in Nafha prison through facilitation from the ICRC.

Zaqout added that there were 16 children among the visitors.
Prisoner Keisi on hunger strike over arbitrary detention

34-year-old Palestinian detainee Youssef al-Keisi started an open-ended hunger strike in an Israeli jail in protest at a renewed administrative term, with neither charge nor trial.

A PIC news correspondent quoted al-Keisi’s family as stating that the detainee announced his hunger strike after the Israeli prison authorities renewed his administrative sentence for the second consecutive time without charge or trial.

Al-Keisi was re-arrested by the Israeli occupation forces on September 19, 2016 from his home in al-Khalil’s western town of Idna, a couple of months after he had been released from an Israeli jail. He was transferred to the Ofer military lock-up, where he had been sentenced administratively to two consecutive six-month terms.

The detainee is the father of four children and a prominent Islamic Jihad leader.
Israeli Soldiers Abduct Thirteen Palestinians In The West Bank

Israeli soldiers abducted, overnight and at dawn Monday, at least Thirteen Palestinians, including a young female student, in different parts of the occupied West Bank, the Palestinian Prisoners’ Society (PPS) has reported.

The PPS in Ramallah, in central West Bank, said the soldiers abducted five Palestinians, including the young student, from several areas of the district.

It identified the young woman as Estobroq Tamimi, 22, from the al-Ram town, north of Jerusalem, and added that she was taken prisoner from her student dorm in Birzeit University.

It is worth mentioning that al-Hreimi was repeatedly abducted and imprisoned by the army, and held a fifty-day hunger striking, protesting his illegal Administrative Detention without charges or trial, before he was released only two months ago.

In addition, many army vehicles invaded the al-Jalazoun refugee camp, in Ramallah, before the soldiers searched homes and abducted two siblings, identified by their first names as Mohammad, 19, and Ibrahim, 21.

Israeli soldiers abducted, on Monday at dawn, five Palestinians, including siblings and a young female student, from several parts of occupied East Jerusalem. The army also abducted a Palestinian from Nablus, after stopping him near Jerusalem.

In addition, the soldiers abducted a young female student, identified as Estobroq Yahya Tamimi, from the al-Ram town, north of Jerusalem, after storming her student residence in Birzeit town, north of Ramallah.

Another Palestinian, identified as Sultan Naqeeb, 19, from Askar refugee camp, north of the northern West Bank city of Nablus, was abducted near Anata town, northeast of Jerusalem.
Army Abducts Two Palestinians In Tulkarem

Israeli soldiers abducted, on Monday at dawn, two Palestinian men, from their homes, in the northern West Bank district of Tulkarem, and summoned for interrogation two Palestinians from Hebron, and one from Bethlehem.

It added that the army also invaded ‘Allar town, north of Tulkarem, and abducted Mohammad Motea’ ‘Asrawi, 39, after searching his home.

In related news, the soldiers invaded Hebron city, in the southern part of the West Bank, searched homes and summoned for interrogation two Palestinians, identified as Nasser Abu Sneina and Montaser al-Badawi.

The soldiers also invaded Yatta town, south of Hebron, and violently searched homes while interrogating the families. Owners of two of the invaded homes have been identified as Tha’er Daqamsha and Abed Rabea’ al-Hreini.

In addition, the soldiers invaded ‘Aida refugee camp, north of Bethlehem, and summoned Mohammad Nidal Abu ‘Aker, 20, for interrogation in Etzion military base and security center, south of the city.
International Conference on Palestinian Children and Israeli Detention Policies: Report

“Stop the war on our children’s minds.”

The conference took place in the Grand Park Hotel on the 15th and 16th of March.  For two days, Palestinian and international speakers made an assessment of the problem and ex-detainee children told their story. The goal was to join forces in formulating a national and international strategy to end the demolition of our youth’s childhoods.

“It is our responsibility to end the war on our children. The international community must stand as one human rights council and hold Israel accountable.” This is how Prime Minister Dr. Rami Al Hamdallah opened the event. It was basically the message of the conference in a nutshell, according to the PNN.

The Israeli occupation detained and interrogated 1,300 Palestinian minors last year alone. More than 300 children are in prison right now and subjected to torture, unfair trials by illegal military courts and sentencing based on ‘secret evidence’. The number of arrests has almost doubled the last two years, and the interrogation methods got harsher. The need for such a conference was urgent, but not as urgent as the need for action and support from the international community.

Speakers described the Israeli detention policies and their international law violations. A panel of psychiatrists explained the effects on the mental health of the children. A group of liberated children even told about their horrible experiences: stories about scare tactics using dogs, severe beatings and refusal to administer insulin to a diabetic to make him confess.

The conclusion was that the systematic arrests of children, the abusive interrogation methods and the harsh sentences for very minor offences are part of a very deliberate strategy. Not a strategy to improve security or obtain information, but to break the spirit of a generation.

At the end of the conference a national strategy and an international campaign was launched. The main message to the international community was to put more pressure on Israel to stop their violations of international law and human rights. The European Union in particular was called upon to activate article 2 of the E.U.-Israel Association Agreement, the free trade agreement between both parties. . This stipulates that respect for human rights and democratic principles is an essential element for trade between them, and Israel is in clear violation of this. Since the E.U. is Israel’s most important trade partner, it could be an important diplomatic weapon to persuade Israel to comply.

Mr. Akram Alayasa, from the Commission of Detainees & Ex-Detainees Affairs, had this message for the children of Aida Camp, who face imprisonment and violence from the occupation every day:

“We try to keep your child spirit alive, and I’m sorry if we didn’t do what we were supposed to do…”