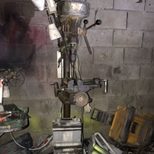 The Palestinian Prisoners Society (PPS) has reported that Israeli soldiers abducted, on Thursday at dawn, 17 Palestinians in different parts of the occupied West Bank, and confiscated machines from a blacksmith’s workshop near Hebron.

Furthermore, the soldiers invaded homes in ‘Atteel town, in the northern West Bank district of Tulkarem, and abducted a journalist, identified as Yousef Shalabi, in addition to abducting Mothanna Abdullah Sadla, 26, from his home in Anabta nearby town.

In Jenin, in the northern part of the occupied West Bank, the soldiers abducted legislator Ibrahim Dahbour, from his home in ‘Arraba town.

In Nablus, also in the northern part of the West bank, the soldiers abducted ‘Assem Shonnar, while Morad Asakra, 24, and Abdullah Ibrahim Jawareesh, 23, were abducted from their homes, in Bethlehem, and Bassam al-Qunbar, 16, was taken prisoner from his home in occupied Jerusalem.

In addition, the soldiers invaded a blacksmith’s workshop in Taffouh town, west of the southern West Bank city of Hebron, shut it down and confiscated its machines, allegedly for being “used to manufacture weapons.”

The soldiers also abducted Osama Nayef Abu Sneina, 20, and Abdul-Fattah Abu Wahdan, after searching their homes and ransacking the properties, in Hebron.

The Palestinian Prisoners’ Society (PPS) has reported that Israeli soldiers abducted, earlier Thursday, seven Palestinians in Qalqilia district, in the northern part of the West Bank, and two in Hebron, in southern West Bank.

The Qalqilia office of the PPS said the soldiers conducted violent searches of many homes in the city, and Kufur Qaddoum town, east of Qalqilia, and abducted seven Palestinians.

It identified the abducted Palestinians as Tahseen Yousef Daoud, 47, Firas Binan ‘Elba, Waleed Hotari, 40, Hamza Hotari, 21, and Waseem Hotari, 38, from Qalqilia, in addition to Ayman Rafiq Eshteiwy, 40, and Nader Amer, 27, from Kufur Qaddoum, amidst violent searches of many homes.

In Hebron, in the southern part of the West Bank, the soldiers abducted Osama Nayef Abu Sneina, 20, and Abdul-Fattah Abu Wahdan, after searching their homes and ransacking the properties.

The army also invaded the home of a local journalist, identified as Radi Karama, in Hebron city, and searched it.

Israeli soldiers invaded, on Thursday at dawn, many homes in Kufur Qaddoum town, in Qalqilia district, in the northern part of the occupied West Bank, and abducted two Palestinians. The army also invaded two print shop in nearby Tulkarem district, and confiscated their equipment and contents.

The Qalqilia office of the Palestinian Prisoners’ Society (PPS) said a large military force surrounded Kufur Qaddoum, before invading it from several directions.

It added that the soldiers broke into, and violently searched homes in the town, including using K-9 units, causing anxiety attacks among the children.

The abducted Palestinians have been identified as Ayman Rafiq Eshteiwy, 40, and Nader ‘Amer, 27; they were cuffed and blindfolded before the soldiers took them to an unknown destination.

The soldiers violently searched the print shops, causing excessive damage, and confiscated machines and computers, in addition to tax documents.

Two Palestinian fishermen were kidnapped by the Israeli navy off Gaza seashore at daybreak Thursday.

Both fishermen are residents of al-Shati Camp, west of Gaza city.

The Israeli navy further seized the fishermen’s vessels and fishing equipment, before they took them to an unidentified destination.
14-year-old child among several Palestinians kidnapped in IOF sweep

Several Palestinians, including a 14-year-old minor, were kidnapped by the Israeli occupation forces (IOF) at predawn Thursday in mass abduction sweeps launched across the West Bank and Jerusalem.

The IOF kidnapped seven Palestinians from the northern West Bank province of Qalqilya.

A PIC news correspondent said the IOF rolled into Qalqilya city in over 20 military jeeps and attacked the Palestinian protesters with spates of teargas canisters, resulting in several suffocation cases.

The list of arrestees included ex-prisoner Tahseen al-Adl, who was kidnapped by the IOF from his own family home.

The occupation army further stormed Qalqilya’s eastern town of Azzoun, where Palestinian vehicles and civilians were subjected to thorough inspection.

Abu Nawas was later dragged to an anonymous location in an armored military truck.

Overnight, Palestinian citizen Bashar Mleitat, from Nablus’s eastern town of Beit Furik, sustained wounds after he had been heavily beaten by the Israeli soldiers.

The Israeli soldiers also stormed Attil town, in Tulkarem, in a number of army vehicles and kidnapped the youngster Youssef al-Shalabi before they wreaked havoc on his family home and attacked his relatives.

A military checkpoint was also pitched by the IOF in al-Mesriyeh Mount.

Palestinian citizen Muthana al-Sadala was kidnapped by the Israeli soldiers from his home in Anabta town, east of Tulkarem.

Meanwhile, another Palestinian citizen was kidnapped by the IOF from Bethlehem.

At the same time, the Israeli forces set up ambushes across Jenin province and a checkpoint on the Jenin-Haifa access road, near the main entrance to Zabouba town, where Palestinian drivers have been made to endure intensive questioning.

The Israeli occupation forces (IOF) on Wednesday evening  kidnapped Palestinian lawmaker Ibrahim Dahbour, from Hamas, at a roadblock near Arraba town, southwest of Jenin city in the West Bank.

Rahma Dahbour, the lawmaker’s daughter, told Quds Press that Israeli soldiers rounded up her father at a makeshift checkpoint on a road near Arraba and confiscated the car he was driving.

Two other Hamas-affiliated lawmakers had been kidnapped from their homes earlier during the current month.

On March 9, Israeli soldiers stormed at dawn the house of MP Samira Halayka in Ash-Shuyukh town, northeast of al-Khalil province, and took her prisoner.

MP Mohamed Attal was also kidnapped from his home on March 21 in ad-Dhahiriya, southwest of al-Khalil.

With these new arrests, the number of Palestinian lawmakers in Israeli jails has risen to 12, 10 of them from the Hamas Movement.
22 mar 2017
Israeli Soldiers Abduct Sixteen Palestinians

Israeli soldiers abducted, overnight until morning hours Wednesday, sixteen Palestinians, including two children, in the West Bank, and one from a village near Nazareth.

In Bethlehem, the soldiers abducted Wael Amjad Khatib, Mohammad Jamal al-‘Azza and Nawwaf Sawarka, after invading their homes and searching them.

Another Palestinian, identified as Ali Yousef Marouf, was abducted from his home in ‘Allar town, in the northern West Bank district of Tulkarem, while Abdullah Fuad Tareeq was abducted in the al-Jiftlik village, in Jericho.

Furthermore, the soldiers abducted Sheikh Firas Omari, a member of the Freedoms and Detainees Committee, from Sandala village, between Nazareth and Jenin.

Since the early morning hours, Israeli forces stormed the area and erected a number of military checkpoints near the house before starting to pour concrete inside it.

A reconnaissance plane was seen flying over the area, the sources added.

During the raid, Israeli forces arrested Qanbar’s father and brother and took them to Maskoubia investigation center, west of Jerusalem.

Five Palestinians had been living in the house, Qanbar’s wife and four children, the eldest of which is seven years old while the youngest is nine months old.

Israeli forces have repeatedly raided the home in recent weeks threatening to demolish it, most recently last week when cement mixers were brought in, though the forces later retreated from the area after apparently having difficulty accessing the home, according to witnesses.

Qanbar was shot dead by Israeli forces in January after he allegedly drove a truck into a group of Israeli soldiers.
Israeli Soldiers Abduct Five Palestinians In Bethlehem, Tubas And Hebron

Israeli soldiers invaded, on Wednesday at dawn, Palestinian communities in the West Bank districts of Bethlehem, Tubas and Hebron, searched many homes, and abducted five Palestinians, in addition to confiscating a tractor and a car.

The Bethlehem office of the Palestinian Prisoners’ Society (PPS) said the soldiers invaded Bethlehem, and nearby Beit Jala city, and violently searched many homes, while interrogating various Palestinians.

The soldiers also invaded Hindaza Mountain area, in Bethlehem, and searched the family home of Awwad Mousa Awwad, who was killed by the Israeli army in Bethlehem, in 2002. The violent search caused excessive damage, especially after the soldiers broke many doors.

It added that the soldiers abducted Mohammad Jamal al-‘Azza, 20, from the Saff Street area, in Bethlehem, and Wael Jamal Khatib, 23, from al-Jadawel neighborhood, in Beit Jala.

On Wednesday morning, the soldiers abducted a young man, and confiscated a Palestinian agricultural tractor and a car, in Khirbit Ebzeeq village, east of Tubas, in central West Bank.

The abducted Palestinian has been identified as Mahmoud Hroub, while the confiscated tractor is owned by Mohammad Nasrallah Hroub, and the car is owned by Hayel Turkman.

Furthermore, the soldiers invaded and violently searched homes in Beit Ummar town, north of the southern West Bank district of Hebron, and abducted one Palestinian, a former political prisoner, identified as Mohammad Khalil Abu Dayya, 28, from his work at a chicken farm in the town.

The soldiers took Mohammad to his home, and searched it, in addition to searching the home of his brother, Hatem, allegedly looking for their third brother, Ibrahim, to abduct him.

The soldiers also invaded the home of Sa’adi Ekhlayyel, looking for a Palestinian from the same extended family.

Also Wednesday, Israeli soldiers fired several artillery shells, and live rounds,  into an area, east of Rafah, in the southern part of the Gaza Strip, killing a Palestinian teenager, identified as Yousef Sha’ban Abu ‘Athra, 18, and wounding two others.

The soldiers also invaded Palestinian lands in Rafah, and bulldozed them amidst sporadic gunfire, while war jets hovered over various areas on the besieged coastal region.

On Tuesday evening, several fanatic Israeli colonists attacked Palestinians and cars, on the main road linking between Nablus and Jenin, in the northern part of the West Bank.

A number of Palestinians were kidnapped by the Israeli occupation forces (IOF) at predawn Wednesday in abduction sweeps launched across the West Bank and Jerusalem.

According to local sources, the campaign targeted Palestinians from Bethlehem, Ramallah, and Occupied Jerusalem.

The list of arrestees included Wael Amjad al-Khatib and Mohamed Jamal al-Azza from Bethlehem, along with Ali Ahmad Khatab and Murad Suleiman Ata from Ramallah.