The Israeli court of Beersheba decided on Tuesday to continue the detention of the director of the Turkish Cooperation and Coordination Agency, TIKA, in the Gaza Strip, Mohammed Murtaja who was arrested on 12th February 2017.

According to Anadolu Agency, the Israeli court announced that the next court hearing will be held on 8th May 2017.

On 21st March 2017, the Israeli censorship allowed the publication of the details of the arrest of Murtaja, who has been working for TIKA since 2012, on charges of transferring Turkish funds to the armed wing of Hamas Movement, while the latter affirmed that the charges are fabricated.

Israel practices incessant pressures on the humanitarian organizations working in the Gaza Strip, which has been under siege since 2006, by accusing their employees of "helping Hamas".
Protest in Gaza demanding immediate release of Halabi

Dozens of children, women and farmers in Gaza called on Tuesday on the local and international institutions to immediately intervene to release Mohammed al-Halabi, the director of the World Vision's office in Gaza, from Israeli jails.

According to the PIC reporter, the protesters raised the flags of Australia and Germany demanding them to intervene to release Halabi.

Zaqqout called on the international community to immediately intervene to release Halabi from Israeli jails, expressing her thanks to both Australia and Germany for their support to the Palestinian people.

She asked the World Vision to track down whoever has a hand in the arrest of its director in Gaza, and to continue its charitable work in the Gaza Strip.

The Israeli court charged engineer Halabi with transferring funds to "terrorist organizations" in Gaza. However, the Australian courts acquitted him from these charges after examining all financial accounts in the organization.

Zahra Zayed, a Gazan child, called on the World Vision to re-open its doors in Gaza and continue to provide recreational and charitable services to the children of Gaza. Zayed appealed to the free world to intervene to release the "soft-hearted father" as she described him.

For her part, Halabi's mother told the PIC that her son does not have any activities with the resistance factions in Gaza, stressing that he was acquitted by the Australian courts. She asked for his immediate release from Israeli jail.
Israeli Army Abducts 24 Palestinians In The West Bank

Israeli soldiers abducted, overnight and at dawn Tuesday, twenty-four Palestinians, including children and a young woman, during invasions and violent searches of homes in Jerusalem, Hebron, Nablus, Tubas and Ramallah, in the occupied West Bank, the Palestinian Prisoners’ Society has reported.

The PPS stated that the soldiers abducted twelve Palestinians, all are civilian guards of the Al-Aqsa Mosque, in occupied Jerusalem, after invading and ransacking their homes in several parts of the city, and later release one of them.

In Nablus, in the northern part of the west Bank, the soldiers abducted a young woman, identified as Sojoud As’ad Reehan, in addition to Dirar Sami Thaher, 22, Amir Sweilem, and Ahmad Eid Hindi, 22.

In Tubas, in northeastern West Bank, the soldiers also searched homes and abducted a child, identified as Saif Daraghma, in addition to Jamal Rakez Maslamani. 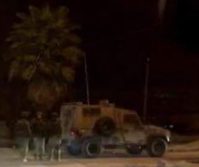 Israeli soldiers abducted, on Tuesday at dawn, three Palestinians, including two children, in the southern West Bank district of Hebron, and two young men in Tubas, in the northeastern part of the occupied West Bank.

The Hebron office of the Palestinian Prisoners’ Society (PPS) said the soldiers invaded and searched homes in the city, and abducted Abdul-Rahman Omran al-Atrash 28.

Furthermore, the soldiers installed roadblocks on roads leading to Sa’ir, Halhoul, Hebron’s northern road in Jouret Bahlas area, and several other places, before stopping and searching dozens of cars, and interrogated many Palestinians while inspecting their ID cards.

Just one day after the Israeli army abducted four civilian guards of the Al-Aqsa Mosque, in occupied East Jerusalem, the soldiers and police abducted, earlier Tuesday, six more guards, from their homes, after invading and violently searching them, in the city.

The abducted guards were cuffed and blindfolded, before the soldiers moved them to several detention and interrogation centers in occupied Jerusalem.

On Monday, the soldiers abducted four guards, identified as Salman Abu Mayyala, Luay Abu Sa’ad, Hamza Nimir and Arafat Najeeb. They all remain detained, awaiting a hearing at the District Court in Jerusalem.

The latest abductions of the guards have been carried out after Israeli personnel of the Archology Department invaded the mosque and tried to confiscate some of its historic stones, while many police officers invaded the Al-Marwani mosque in the Muslim holy compound.

During the invasion, the soldiers assaulted many Palestinians, including the head of the Al-Aqsa Mosque, Sheikh Omar al-Kiswani.
27 mar 2017
Youth kidnapped by Israeli army over alleged anti-occupation stabbing

A Palestinian youth was kidnapped by the Israeli occupation forces (IOF) at noontime Monday near Hawara checkpoint, south of Nablus, on allegations of an attempted anti-occupation stabbing.

The Israeli army spokesman said a Palestinian youth was arrested after he attempted to stab Israeli soldiers.

Reporting from the scene, eyewitnesses told the PIC that the young man was walking near the checkpoint while an Israeli woman suddenly fled the scene. A group of soldiers deployed in the area nabbed the young man.

A snapshot circulated by Hebrew-speaking news outlets showed a sharp object thrown on the ground and purported that it was carried by the youth.
Israeli court extends administrative detention against MP Natsheh

An Israeli court on Sunday extended the illegal administrative detention order based on no trial or charge to 6 months against Palestinian MP in the Palestinian Legislative Council (PLC) Mohammad al-Natsheh.

The PIC reporter revealed that Israeli forces arrested MP Natsheh on September 29, 2016 and issued a renewable 6-month term of administrative detention against him.

The Palestinian MP served a total of 10 years of imprisonment in Israeli jails. He was released on September 2010 after a 9-year imprisonment with 6 years spent in solitary confinement.

The Hamas leader and MP Natsheh also served another 5 years in the Palestinian Authority (PA) jails. He was arrested for several and almost successive times at the hands of Israeli forces.
Captive Shalash suspends hunger strike

The Palestinian captive Rafat Shalash, 34, from Beit Awwa town west of al-Khalil, suspended his open hunger strike in Negev Israeli jail after promises to determine the duration of his administrative detention order.

The father of the detainee underlined on Sunday that his son suffers a serious health condition as he complains of stomach problems aggravated due to the policy of medical negligence pursued in Israeli jails.

Israeli forces arrested Shalash, an ex-detainee served 7 years in Israeli jails, on January 17, 2016 and held him captive under administrative detention order which was issued against him for three times. He started an open hunger strike on March 16 in protest at the illegal administrative detention order based on no trial or charge.
Israeli Soldiers Abduct Five Palestinians, Including Two Children, In Bethlehem

The Bethlehem office of the Palestinian Prisoners’ Society (PPS) has reported that Israeli soldiers have invaded, and ransacked homes, in the district, interrogated many Palestinians and abducted five, including two children.

The soldiers also invaded the Saff Street area, in the center of Bethlehem city, and abducted ‘Ala Mohammad al-Hreimi, 18, after repeatedly assaulting him in front of his family while violently searching their home.
Israeli Soldiers Abduct Eighteen Palestinians In The West Bank

Israeli soldiers abducted, overnight and earlier Monday, eighteen Palestinians, including a journalist and one woman, during invasions of homes and property, in different parts of the occupied West Bank, mainly from Bethlehem and Tulkarem, the Palestinian Prisoners Society (PPS) said.

In Tulkarem, in the northern part of the West Bank, the soldiers abducted ‘Ala Khaled Ismael, 23, Ahmad Yousef Abu Harb, 34, Rafat Jamil Naseef, 50, and Hamza Yahya, 24.

In Jenin and Qalqilia, also in northern West Bank, the soldiers abducted Mohammad Farouq ‘Aabed, and a journalist, identified as Ayyoub Ma’zouz Hassan, 30.

In Hebron, in the southern part of the West Bank, the soldiers abducted a woman, identified as Tahani Jaber.

In occupied East Jerusalem, the soldiers abducted two Palestinians, identified as Lu’ay Abu Sa’ad and Salman Abu Mayyala; both guards of the Al-Aqsa Mosque, and were taken prisoner from its courtyards.

On Monday at dawn, the soldiers invaded Kafr Ni’ma village, west of Ramallah, before breaking into and searching the home of a Palestinian artist, identified as Osama Nazzal, and confiscated his Caricatures.

Army Abducts Two Guards Of Al-Aqsa Mosque In Jerusalem, One Palestinian Near Jenin

Israeli soldiers invaded, On Monday morning, the courtyards of the Al-Aqsa Mosque, in occupied East Jerusalem, and abducted two local guards after they prevented the soldiers from confiscating some of its ancient stones to send them to an Israeli archeologist. The soldiers also abducted one Palestinian, near Jenin, in the northern part of the occupied West Bank.

The WAFA Palestinian News Agency said many soldiers, and police officers, invaded the courtyards of the Al-Aqsa Mosque, and abducted two of its guards, identified as Salman Abu Mayyala, and Luay Abu Sa’ad, before taking them to a detention and interrogation center, in the Jerusalem’s Old City.

It added that the Al-Aqsa Mosque head, Sheikh Omar Kiswani, tried to prevent the soldiers from assaulting and abducting the two guards, but the officers kept pushing him away in a violent manner.

The soldiers were trying to illegally confiscate ancient stones from the Muslim holy site, to send them to an Israeli archeologist.

Israeli soldiers abducted, on Monday at dawn, fourteen Palestinians, including a recently-released political prisoner, in the occupied West Bank, during violent searches of homes, and confiscated thousands of dollars.

The Tulkarem office of the Palestinian Prisoners’ Society (PPS), in the northern part of the West Bank, said the soldiers abducted Ra’fat Jamil Naseef, 51, from his home in the Southern Neighborhood, after invading his home and violent searching it.

The PPS added that Naseef was a former political prisoner, who was held by Israel, and was only released nearly a month ago.

The Israeli army said its arrested what it called fourteen wanted Palestinians, including members of Hamas, in the West Bank.

In Bethlehem, the soldiers searched many homes and confiscated thousands of US Dollars, reportedly for being distributed to what the army described as “families of terrorists.”

The Israeli occupation forces (IOF) at daybreak Monday kidnapped the Hamas leader Ra’fat Nasif from his family home in the West Bank.

A PIC news correspondent said the IOF stormed Tulkarem’s southern neighborhood in over 20 military jeeps and cordoned off residential alleys before they ravaged Nasif’s family home and attacked his family members.

Nasif was released one month ago from Israeli jails, where he had spent a total of nearly 20 years.

The campaign targeted other Palestinians from occupied West Bank provinces.

Six Palestinians were kidnapped by the IOF from the southern West Bank province of Bethlehem.

Two ex-prisoners—Mootaz Samih and Jihad Sari—were kidnapped by the IOF from Ramallah’s town of Rentis.

Meanwhile, clashes burst out in Jenin, the northern West Bank, after the occupation army rolled into the city, kidnapped a Palestinian civilian, and wreaked havoc on civilian homes.

The IOF attacked the Palestinian anti-occupation protesters with randomly-unleashed spates of bullet fire and teargas canisters.

The Palestinian youth responded by hurling stones and home-made firebombs on the occupation patrols.

The IOF further raked through Qalqilya on claims that an explosive device was spotted near Eliyahu checkpoint.