The Israeli police arrested on Wednesday journalist Samah Dwaik from her house in Ras al-Amud neighborhood in Silwan town, south of al-Aqsa Mosque.

Local sources reported that Dwaik was taken to an interrogation center in occupied Jerusalem.

Dwaik was previously arrested by the Israeli police on charges of "incitement" on social media.
ISA claims capturing Hamas-affiliated cell north of al-Khalil

The Israeli Security Agency (ISA) alleged in a statement that the cell carried out shooting attacks against Israeli settlers and soldiers in street 60 near the camp.

The ISA said that the cell is led by Ahmad Abu Sil, 25, an ex-prisoner who was previously arrested by the Palestinian Authority security forces and one of Hamas's activists in al-Aroub camp.

The IOF closed all entrances to Beit Fajjar and arrested the Palestinian youth Amjad Taqatqa at the main entrance of the town.

Israeli soldiers shot, and seriously wounded, on Wednesday evening, a Palestinian teenage girl, near the Etzion colony block, south of Bethlehem, in the occupied West Bank, after she allegedly tried to ram them with a car.

Initial information revealed that the girl has no driver’s license, and never had any driving lessons.

The girl has been identified as Fatima Jibrin ‘Ayed Taqatqa, 16, from Beit Fajjar town, close to the incident location, south of Bethlehem.

Initial information indicates that the girl does not have a driver’s license, was not experienced in driving a car, and likely became scared seeing the soldiers at the intersection before losing control of her vehicle.

The girl crossed the median of the street, and struck metal bars protecting a bus stop in the opposite direction.

The soldiers opened fire on the car, seriously wounding Fatima, alleging that the incident was a deliberate attack.
Updated: “Israeli Soldiers Abduct 30 Palestinians In The West Bank”

In a press release, the Palestinian Prisoners’ Society (PPS) has reported that the number of Palestinians, abducted by Israeli soldiers overnight and at dawn, Wednesday, in different parts of the occupied West Bank, has arrived to thirty, most of them from occupied Jerusalem.

Furthermore, the soldiers abducted Omar Firas al- A’war, 20, from his home in Silwan, town, south of the Al-Aqsa Mosque, in Jerusalem.

In Bethlehem, the soldiers abducted Morad Zaghari and Baha’ Maslat, from Deheishe refugee camp, south of the city.

Furthermore, two Palestinians, identified as Ahmad Fayyad Bushnaq and his brother Husam, were abducted from their homes in Jenin, in the northern part of the West bank.

One Palestinian, identified as Yahya Abdul-Aziz ‘Aassi, 22, was abducted in Salfit district, in central West Bank.

Israeli soldiers abducted, on Wednesday at dawn, 19 Palestinians, during extensive invasions and violent searches of homes, in different parts of the occupied West Bank, the Palestinian Prisoners’ Society (PPS) has reported.

The Nablus office of the PPS, in the northern part of the West Bank, said the soldiers abducted Yasser Bilal Yameen, a student of the Najah National University, and Mos’ab al-Hindi, from Tal village, south of the city.

The soldiers also invaded Rommana village, west of the northern West Bank city of Jenin, and abducted two siblings, both former political prisoners, identified as Ahmad, 45, and Hussam Fayyad Bushnaq, 38, from their homes.

The army declared the village a closed military zone, installed roadblocks surrounding it, and prevented the workers from leaving it.

Also at dawn, the soldiers invaded Deheishe refugee camp, south of the West Bank city of Bethlehem, and shot five Palestinians, including one who suffered a head injury, in addition to abducting a former political prisoner, identified as Morad Zaghari.

In Bethlehem city, the soldiers searched several homes, and abducted one Palestinian, identified as Baha’ Maslat.

In Salfit, in central West Bank, the soldiers abducted a student of the Najah University in Nablus, identified as Yahya ‘Aassi.

It is worth mentioning that the soldiers also invaded Qalqilia city, in northern West Bank, and drove into several neighborhoods before withdrawing.
Five Palestinians injured by IOF in Deheisheh camp

Local sources said that the soldiers intensively and randomly opened fire at angry young men after storming the camp, which led to the injury of five citizens.

Two sons of Jenin mayor Ibrahim Ramadan were among the wounded. They were aboard their car when soldiers opened fire at them, according to the sources.

The IOF also broke into and ransacked the house of ex-detainee Murad al-Zagharri in the camp before rounding him up.

Meanwhile, the IOF kidnapped 23 Palestinians in the West Bank and Jerusalem during overnight raids on homes, according to a statement released by the Israeli army.
West Bank homes raided, citizens kidnapped in IOF dawn raids

In Nablus, the IOF kidnapped two young men from Tel town, north of the West Bank.

The two detainees were identified as Musaab al-Hindi, 27, and Yaser Yamin, 20.

Meanwhile, local young men from the town hurled stones at the soldiers, who responded by firing tear gas grenades to disperse them.

Violent clashes also broke out at dawn between young men and soldiers east of Nablus after the latter stormed the Joseph’s Tomb area to protect Jewish settlers, who infiltrated into the city without prior coordination with the Israeli army.

Two others were also rounded up by IOF soldiers in al-Khalil city. They were identified as Anas al-Zaghir and his cousin Abdullah al-Zaghir, both ex-detainees.

In a separate incident, the IOF conducted overnight military drills on the plains of Jalqamus and Beit Qad towns, east of Jenin, and deployed troops on the Jenin-Nablus street for long hours.
14 mar 2017
B’Tselem Detainee: ‘6 days in Israeli jail and no questioning, as usual’

Israeli rights group B’Tselem said, on Tuesday, that the Israeli occupation forces kidnapped one of its volunteers, kept him in jails for six days without any reason.

B’Tselem said, in a report about the incident: “On Friday as 4pm, about 20 to 30 residents form the village of Madma in the south of [the West Bank] city of Nablus. They were in a picnic with their families.”

The report continued, according to Days of Palestine: “At 6:15pm, five or six Israeli soldiers from the area of the [illegal] Israeli settlement of Yitzhar, which is about 1.5km away from Madma, approached the Palestinian families and fired tear gas at them.”

Afterwards, the report said: “Three soldiers continued walking towards the Palestinian families, while the others got away towards the south.”

Watching what was going on, B’Tselem volunteer Ahmed Ziyada, 25, arrived in the scene. He is a resident of Madma and get out of his home after seeing the tear gas being fired at the Palestinian families.

Ziyada approached the three Israeli soldiers with his camera taking footage of them and the violations.

“The Israeli soldiers asked for his ID and he showed it to them and told them that he is a volunteer with B’Tselem,” the report said. “An argument took place between Ziyada and the three soldiers, who asked him to go home.”

According to the report, Ziyada refused to go home and the soldiers decided to kidnap him. “They used their radio to call for more soldiers. They beat him to the ground, put his hands behind his back and tied them with a plastic clip,” the report said.

“One of the soldiers put his foot on my head and the others continued beating me,” Ziyada told B’Tselem. “They took me to the Huwwara Military Camp, where he spent five days under investigation. On sixth day, he was taken to Salem Court as he was accused of undermining soldiers’ work.”

Then, Ziyada was turned back to Huwwara Military Camp and then was released on bail of NIS500. “He was released at 11:30pm,” B’Tselem report said and was left to go home alone.

B’Tselem said that such actions show that the Israeli soldiers easily use their power in an arbitrary way to harass Palestinians and their families, as well as to beat the Palestinians if they wanted to face the Israeli violent interference in their private life.

The Israeli rights group said that this incident, like many others, go without investigation or punishment of any of the perpetrators.
Israel closes office belonging to Arab Studies Society

The decision to shut down the office was issued by the Israeli Minister of Public Security Gilad Erdan.

According to a statement issued by the Israeli police, the office threatens Israel’s settlement ambitions as it was dedicated to the research of land in the Palestinian territories including settlement monitoring, soil surveys, land confiscation. It further threatens "Israel's sovereignty over Jerusalem", according to the statement.

The Arab Studies Society was established in 1980, registered in Israel as a public institute and was located in the historic Orient House building. Like any think tank, the society organized lectures and conferences and housed a big public library.

Eyewitnesses said that the Israeli forces arrested Tufakji and confiscated all computers in the Society along with numerous files.
PPS: “Israeli Soldiers Abduct 19 Palestinians In The West Bank” 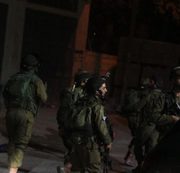 The Palestinian Prisoners’ Society (PPS) has reported that Israeli soldiers abducted, overnight until early morning hours, Tuesday, at least nineteen Palestinians, including children, in different parts of the occupied West Bank, after invading their homes and violently searching them.

The Bethlehem office of the PPS said the soldiers abducted four Palestinians in villages and towns in the district.

In occupied Jerusalem, the soldiers also invaded and searched homes, and abducted Khalil Tafakji, an expert in maps and Israeli colonies, who works with the Orient House, north of the city.

Two Palestinian children, identified as Mo’men Ma’moun Mheisin, 15, and Ismael Tawfiq Mheisin, 17, were abducted from their homes in the al-‘Eesawiyya town, in Jerusalem, after the soldiers broke into them and searched them.

In Nablus, also in the northern part of the West Bank, the soldiers abducted Assem Mustafa Shonnar.

In addition, the soldiers abducted Abdul-Khaleq Burnat, 17, from his home in Bil’in village, west of Ramallah, in central West Bank.

In Hebron, in the southern part of the West Bank, the soldiers abducted Sultan Nader Masalma, and Yazan Da’na, 15.
Arrests, interrogations reported in predawn sweep by Israeli army

Several Palestinians were kidnapped and others interrogated by the Israeli occupation forces (IOF) at daybreak Tuesday in a mass abduction sweep rocking West Bank provinces.

The IOF rolled into Nablus, in the northern West Bank, and kidnapped a Palestinian youth, identified as 20-year-old Assim al-Shunar, the son of the lecturer at An-Najah University, Mustafa al-Shunar.

Meanwhile, clashes burst out in Thanaba, in Tulkarem, shortly after the IOF stormed the town, at around 3 a.m., and rummaged into Palestinian homes.

A PIC reporter quoted eye-witnesses as stating that the Israeli troops unleashed random barrages of bullet fire and acoustic grenades all the way through the assault.

Several Palestinian citizens have been subjected to intensive questioning and crackdowns at their own homes by the Israeli soldiers.

At the same time, the occupation forces rummaged into three Palestinian homes in Jenin’s southern town of Qabatiya, in the northern West Bank, and subjected the residents to exhaustive interrogation.

Clashes burst out in the area. The Palestinian protesters responded to the assault by hurling stones at the occupation soldiers.
Schoolchildren attacked, minor kidnapped by Israeli forces in Tekou’

According to local sources, Israeli army patrols stormed Bethlehem’s eastern town of Tekou’ and attacked Palestinian schoolchildren on their way back home.

The Israeli soldiers chased down the Palestinian learners across Tekou’ streets and alleys, amid heavy discharge of gunfire and teargas canisters.