The Israeli occupation forces (IOF) on Saturday evening kidnapped a Palestinian young man near Jenin in the West Bank, claiming they foiled an intended stabbing attack.

According to Israel’s Channel 12, the young man was found in possession of a knife he was intending to use to carry out a stabbing attack.

Palestinian Prisoner's Society (PPS) confirmed that 50 out of the 87 administrative detention orders are renewed orders, while the remaining 37 detainees received detention orders for the first time.

PPS added that the administrative detention orders were issued between October 1-16th.

The orders range from three to six months of prison.

According to prisoners rights group Addameer, there are 5,450 Palestinian prisoners being held in Israeli prisons, of whom 495 are in administrative detention, 53 are female prisoners, 215 are children, and 43 of the children are under the age of 16.

A report by Israeli NGO B'Tselem, which was based on the Israeli Prison Service statistics, read that over the last year, 29 Palestinians were taken into administrative detention every month, on average, and 37 were released.

The report added that in the past decade, the number of detainees held by Israel in a single month never fell below 150.

According to local sources, Israeli authorities handed the 40-day ban order to Salhab after he was previously banned for an entire week following his release from Israeli custody, last week.

Along with other top Waqf officials, Salhab was detained by Israeli forces as a result of playing an important role in the reopening of the al-Rahma Gate (Mercy Gate), one of the Al-Aqsa Mosque gates, by opening the doors of the hall to allow worshipers to perform Friday prayers inside.

Several Waqf employees also received orders banning them from entry to the Al-Aqsa Mosque compound for periods ranging between one week and six months.

The al-Rahma Gate is a big building that lays to the east of the Al-Aqsa, the Israeli authorities sealed the building in 2003 as it was the headquarters of the Islamic Heritage Committee; Israel had said at the time that the building was being used for political activities. In 2017, an Israeli court ordered that the building be closed until a further notice.
IOF kidnaps 9 Palestinians in West Bank sweeps

The Israeli occupation army said in a statement in the morning that 9 Palestinians were arrested for being involved in resistance operations.

The IOF late on Saturday arrested two Palestinian brothers at al-Karama crossing between the West Bank and Jordan.

Local sources told the PIC reporter that Ghassan and Anas Tahayna were stopped at al-Karama crossing while they were returning to their home in Jenin and interrogated for hours before they were taken to an undeclared destination.

The IOF stormed Tuqu' and al-Khader towns in Bethlehem, raided a number of houses, and arrested three boys, one of whom is an ex-prisoner.

Violent confrontations flared up during an IOF raid into Ramallah, according to local residents. The IOF soldiers heavily fired tear gas bombs at the Palestinians.

A Palestinian citizen identified as Mohammed Mousa was arrested in Tulkarem.

Meanwhile in Qalqilya, the IOF raided Azzun town and arrested Adel Husein after breaking into his family house, wreaking havoc on it, and assaulting his father and mother.

In the northern West Bank district of Jenin, one Palestinian was detained and identified as Raja Ahmad Abu Safa.

In the northern West Bank district of Tulkarem, PPS said another Palestinian was detained. He was identified as Muhammad Hassan Mousa.

The reason for the summoning remained unknown.

Asra Media Office has said that the sick prisoners in the Negev jail have refrained from taking their medications and dealing with the internal clinic in protest at the cancer-causing jamming devices, which were recently installed by the Israeli prison service in the facility.

In a brief statement on Saturday, Asra affirmed that Negev prison officers carrying rifles were reportedly walking back and forth inside the jail’s sections to intimidate the prisoners.

A state of tension has been prevailing for days in the Negev prison after jailers deployed jamming devices in all sections to disrupt radio, television and communication waves.

Those jamming devices have also caused severe headaches for the prisoners, who fear they could suffer from cancer.
Two Palestinian brothers on hunger strike in Israeli jails

Ahmad Mousa, 41, started a hunger strike in protest at his administrative detention and his brother Addal joined him on the same day.

Palestinian prisoners in Ofer jail told Mohjat al-Quds that the Israel Prison Service responded to the move by holding the two brothers in solitary confinement.

A father of seven, Ahmad Mousa was arrested on 7 November 2018. He has been detained without charge or trial ever since. Addal Mousa, his brother, was arrested on 2 February 2015 and sentenced to five years and three months in jail.

Both brothers are accused of being affiliated with the Islamic Jihad movement.
Israeli Soldiers Attack Detainees In Negev Detention Camp

Israeli soldiers attacked, on Saturday evening, many Palestinian detainees in Section 7, Branch A, of the Negev Desert Detention Camp.

The detainees said the soldiers conducted provocative body searches, in addition to searching their bunks and property, and assaulted many of them.

They warned of the repeated and escalating assaults and violations against them, especially amidst international silence regarding their suffering, including the bad living condition and lack of adequate medical care.

The Negev Detention Camp is one of the largest Israeli prisons, holding around 2000 Palestinian detainees; most of them are held under arbitrary Administrative Detention orders, without charges or trial.

Palestinian Researcher, former political prisoner and the head of the Statistics Department of the Detainees Committee, strongly denounced the international idleness regarding the suffering of the detainees, and the serious crimes and violations they are subjected to.

“This silence is complicity; it enabled and allowed Israel to continue to commit serious violations against the detainees; it allowed Israel to act in direct violation of all international laws and treaties, without punishment,” Ferwana, who also runs Palestine Behind Bars website said.

Baroud was taken prisoner in 1991, suffered from various health conditions, in addition to a psychological condition; he died from an internal hemorrhage, and was only moved to Soroka Israeli hospital after losing consciousness.
1 mar 2019
Shin Bet extends administrative detention of MP Abu Jehaisha

MP Abu Jehaisha is being detained in Ofer jail along with his three sons, Muaad, Mutawakel and Miqdad.

The administration of Ofer jail told the lawmaker about the decision to extend his detention on Wednesday, according to his wife.

Abu Jehaisha has been in administrative detention since December 6, 2018.
Israel shuts down Jerusalem restaurant for hiring staff from West Bank

Israeli authorities shut down a Palestinian restaurant in Salah al-Din Street in occupied East Jerusalem, on Friday, under the pretext of hiring a West Bank resident as an employee.

Local sources said that Israeli authorities hung up an order closing Abu Ali Hummus and Falafel Restaurant for ten days under the pretext of employing a West Bank resident, who did not obtain an Israeli entry permit to enter Jerusalem.

Sources added that Rashdi Ishti, the owner of the restaurant, was summoned for interrogation by Israeli police forces and was informed regarding the order to shut down his business.

The owner did not receive prior notice concerning the Israeli decision.

Under Israel's permit regime, Palestinian residents of the West Bank are not allowed to access occupied East Jerusalem or Israel without an Israeli-issued permit, and many risk being shot and injured while trying to cross into Israel to work.

Tens of thousands of Palestinian workers are forced to seek a living by working in Israel due to crippling unemployment in the West Bank, as the growth of an independent Palestinian economy has been stifled under the ongoing Israeli military occupation, according to rights groups.

Workers who hold Israeli entry permits, however, must endure long waits either at the Checkpoint 300 or the Qalandiya Checkpoint, the only two access points Palestinians from the southern and central West Bank have to Jerusalem and Israel.

Additionally, the rules only allow Palestinians with blue identity card -- either those who are Israeli citizens of East Jerusalem residents -- from entering, meaning even Palestinians over the age of 45 who are from the West Bank or elsewhere are unable to enter.
Palestinian fireman banned from al-Rahma Gate

The Israeli police banned, on Thursday evening, a Palestinian fireman, from the Islamic Endowment Department, from entering the al-Rahma Gate (Gate of Mercy) area inside the Al-Aqsa Mosque compound.

Head of the public relations office at the Islamic Endowment Department, Firas al-Dibs, said that Israeli police forces detained Imad Abdeen while at Hatta Gate adjacent to the Al-Aqsa Mosque.

Abdeen was interrogated for several hours before being released on the condition of being banned from entering the al-Rahma Gate area, as Israeli police claim Abdeen was with Al-Aqsa guards who opened the gate.

The al-Rahma Gate is a big building that lays to the east of the Al-Aqsa, the Israeli authorities sealed the building in 2003 as it was the headquarters of the Islamic Heritage Committee; Israel had said at the time that the building was being used for political activities. In 2017, an Israeli court ordered that the building be closed until a further notice.
Ashrawi: 'Israel’s administrative detention an assault on human rights'

Ashrawi said in a statement, on Thursday, “After twenty months in Israeli captivity, Khalida Jarrar is finally free. This imprisonment was yet another chapter in a lifetime of persecution and oppression from the Israeli occupation to this prominent human rights defender and elected representative, including several arrests, house arrest, and a ban on travel due to her activism against occupation and her work in defending the national and human rights of her people.”

She added, “As we celebrate the release of Khalida, we must not lose sight that nearly 500 Palestinian citizens, including children and other elected officials, are languishing in Israeli prisons, without charge or trial, under so-called administrative detention.”

“This form of open-ended detention is a tool of cruel punishment and oppression that the Israeli occupation regime has employed against thousands of Palestinian activists throughout the past fifty-two years of occupation. It is an abhorrent practice that violates international law, including international humanitarian law and international criminal law, as well as the basic rights and dignity of Palestinians.”

She stressed that states that “champion the universal values of human rights and the rule of international law must not turn a blind eye to Israel’s policy of mass incarceration of Palestinians, including the use of the so-called administrative detention. This policy is a fundamental anchor of the system of control and oppression that Israel has employed against the Palestinian people for more than half a century to perpetuate its illegal occupation.”

Ashrawi continued, “It is time to confront this policy with resolve. Human rights are universal and indivisible. The state of human rights around the world is undermined so long as Israel is allowed to violate the basic human rights of the Palestinian people with impunity and without accountability.”

She also called on all concerned states and organizations “to work on ensuring accountability and ending Israel’s shameful legacy of mass incarceration and oppression.”
12 Palestinians Abducted in West Bank Raids 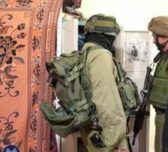 Israeli forces abducted 12 Palestinians, including two minors, in raids in the occupied West Bank, according to a statement released today by the Palestinian Prisoner’s Society (PPS).

The PPS said, according to WAFA, that Israeli soldiers detained six people from Ramallah, two of them minors released some hours later.

Forces also detained five from Nablus, one from Qalqilia and one from Tulkarem, in the north of the West Bank, and one from Jericho in the Jordan Valley.
Page:  2 - 1
Powered by