According to the Israeli prison service, the Ramon administration was able to put out fires in 10 cells in the section of Hamas prisoners.

The Palestinian Prisoner Society (PPS), for its part, said that there was extreme tension in Ramon jail, especially in section 1 where prisoners ignited fires and chanted slogans in protest at the cancer-causing cellphone jammers which the prison administration had installed.

The PPS affirmed that the tension escalated after the Ramon administration had transferred 90 prisoners from section 7 to section 1, adding that those prisoners refused to take their belongings with them in protest at transferring to section 1, where there are several jamming devices.

Recently, the Israeli prison service installed many cellphone jamming devices in its jails, but Palestinian prisoners complained of their suffering from constant headaches and expressed fears that those jammers could cause cancer.
Israeli forces detain 13 Palestinians in West Bank

According to Palestine Prisoner’s Society (PPS), two Palestinians were detained by Israeli forces in the southern West Bank district of Hebron. They were identified as Awni al-Rajbi and Hazem Falah al-Razem.

In the southern West Bank district of Bethlehem, three Palestinians were detained. They were identified as Abdullah Yousef Abu Mufreh, Muhammad Naji Hamid, and Feras al-Yemeni.

In the central West Bank district of Jerusalem, one Palestinian was detained and identified as Thaer Anees Ghabash.

In the northern West Bank district of Nablus, PPS said two Palestinians were detained. They were identified as Omar Abu Shuwasheh and Mutasem Rabah Abbas.

Israeli soldiers abducted, on Monday at dawn, eight Palestinians, including one lawyer and one child, from their homes, in several parts of the occupied West Bank, the Palestinian Prisoners’ Society (PPS) has reported.

The PPS office in Bethlehem, south of occupied Jerusalem, said the soldiers invaded and searched homes in the al-Khader town, south of the city, and abducted Baha’ Mahmoud Issa, 23.

In Hebron, in southern West Bank, the soldiers abducted a Sa’id Mohammad al-‘Allami, from his home in Beit Ummar town, north of the city, after violently searching the property.

The soldiers also invaded many homes in several neighborhoods in Hebron city, and searched them while interrogating the Palestinians, and installed roadblocks on the main entrances of Sa’ir and Halhoul towns, before stopping and searching dozens of cars, and interrogated many Palestinians while inspecting their ID cards.

In addition, the soldiers searched many homes in the az-Zawiya town, west of Salfit in central West Bank, and abducted Nour Amin Abu Laila, after invading his family’s home, and interrogating him along with his parents.

It is worth mentioning that the home was invaded and ransacked by the soldiers twice overnight, after the soldiers stormed the town, and opened fire at many protesters, causing dozens to suffer the effects of teargas inhalation.

In Biddya town, west of the central West Bank city of Salfit, the soldiers invaded a shop, owned by Mustafa Abu Laila from the az-Zawiya nearby town, and searched it before confiscating surveillance recordings and equipment.
Army Invades, Searches, Homes of Two Political Prisoners In Ramallah

Israeli soldiers invaded, on Monday at dawn, the homes of Fateh Revolutionary Council member, Zakariya Zobeidi, and attorney Tareq Barghouth, and violently searched them while interrogating their families.

They added that the soldiers violently searched the home and interrogated the family for several hours.

In addition, the soldiers invaded the home of a detained lawyer, identified as Tareq Barghouth, and searched it while interrogating family.

It is worth mentioning that Zobeidi and Barghouth were taken prisoner on February 27th, before the soldiers abducted Barghouth’s wife and his brother, on March 5th, and later released the wife.
Update: “Israeli Soldiers Shoot Two Palestinians, Abduct Two Others, Near Salfit” 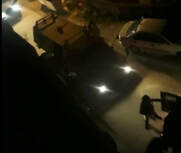 Israeli soldiers abducted, on Sunday at night, two young Palestinian men, and shot two others, during ongoing military invasions carried out by the army in the az-Zawiya, Bruqin and Kafr ed-Deek towns, west of Salfit, in central West Bank.

The soldiers invaded and violently searched dozens of homes in the three towns and interrogated many Palestinians while inspecting their ID cards.

Media sources in az-Zawiya said the soldiers searched many homes, and fired at dozens of protesters, shooting one with a rubber-coated steel bullet, and causing others to suffer the effects of teargas inhalation.

The soldiers also shot one Palestinian with a concussion grenade in Kafr ed-Deek town, west of Salfit.

It is worth mentioning that dozens of soldiers have been deployed around many Palestinian communities in Salfit governorate since morning hours, following the stabbing attack that led to the death of one Israeli soldier.

At least twenty Israeli military jeeps invaded, on Sunday at night, the towns of az-Zawiya and Kafr ad-Deek, west of Salfit in central West Bank, and shot two Palestinians with live fire, in addition to causing many to suffer the effects of teargas inhalation.

He added that the soldiers shot two Palestinians with live fire, and causing dozens of suffer the effects of teargas inhalation, in addition to various cuts and bruises.

He added that dozens of soldiers were deployed around the town, and various Palestinian communities in Salfit, since morning hours, following the stabbing attack that led to the death of one Israeli soldier.

In addition, the mayor of Kar ad-Deek town, Mohammad ad-Deek, said the dozens of soldiers also invaded the town, and shot a young man with a gas bomb in his face, while the Palestinians were protesting the invasion.

He added that the injured young man suffered moderate wounds, and was rushed to a hospital for treatment.

The mayor also stated that dozens of soldiers were still in the town, after isolating it from the surrounding communities, and added that dozens of villagers were unable to return to their homes.

In addition, the soldiers stormed and ransacked many homes, and occupied their rooftops to use them as firing posts and monitoring towers.

The soldiers also invaded Bruqin nearby town, stormed and ransacked many homes, and interrogated dozens of residents.

In related news, the soldiers closed the iron gate which was installed by the army in Wadi ad-Dalb road, near the villages of Deir Ebzi’ and Kafr Ni’ma, and prevented the Palestinians from crossing, forcing them to take alternate, unpaved roads to their homes.
IOF kidnaps two farmers west of Jenin

The Israeli occupation forces (IOF) on Monday evening kidnapped two Palestinian farmers from their land near Rummanah town, west of Jenin in the West Bank, on a charge of their presence near the Salem military base.

Local sources told a reporter for the Palestinian Information Center (PIC) that Israeli soldiers from the Salem base rounded up farmers Ameen Abdul-Raouf and Mohamed Abu Khattab as they were working their land near Rummanah town.

They added that the soldiers subdued the farmers and transferred them to the base.
17 mar 2019
IOF arrests 17-year-old girl in al-Khalil

The Israeli occupation forces (IOF) on Sunday evening arrested a Palestinian girl near the Ibrahimi Mosque in al-Khalil.

The detainee was transferred while handcuffed to a nearby Israeli intelligence center for interrogation.

The IOF soldiers every now and then arbitrarily arrest Palestinian boys and girls at the West Bank checkpoints under various pretexts and allegations.
Israeli police arrest Aqsa guard

The Israeli police on Sunday afternoon arrested a Palestinian guard of al-Aqsa Mosque in Occupied Jerusalem.

The Islamic Awqaf said in a statement that the Israeli police arrested Essa Barakat while he was entering al-Aqsa Mosque.

Earlier on the day, the police arrested Hamza al-Nepali, another Aqsa guard, and transferred him to an Israeli detention center for interrogation.

The Israeli police over the past week have arrested dozens of Aqsa guards and Awqaf officials or banished them from al-Aqsa Mosque after the opening of Bab al-Rahma prayer area.
10 Palestinians detained by IOF in W. Bank campaigns

According to local sources, the IOF kidnapped at least 10 citizens, mostly from their homes, in the West Bank.

Three of those detainees were rounded up at dawn by the IOF at Huwara checkpoint in southern Nablus.

A 17-year-old teenager called Mohamed Ghanim was also among the detainees after Israeli soldiers ransacked his parents’ home in al-Khader town, south of Bethlehem.
Army Abducts Fateh Secretary In Jerusalem, Teen In Bethlehem

Israeli soldiers abducted, on Sunday at dawn, the secretary of Fateh Movement in occupied East Jerusalem, and a Palestinian teen in the al-Khader town, south of Bethlehem, in the West Bank.

Media sources in Jerusalem said the soldiers invaded and ransacked the home of Fateh Movement’s secretary in the city, Shadi Mitwer, and abducted him, before moving him to an interrogation facility.

It is worth mentioning that the Palestinian, along with the Governor of Jerusalem, Adnan Gheith, have been frequently abducted and detained by Israel.

They are among the dozens of Palestinians, who have recently been abducted by the army, and most of them are still imprisoned, as part of Israel’s attempts to prevent the Palestinians from holding political activities in the occupied city, and for protesting the escalating Israeli violations against the Al-Aqsa Mosque, and the ongoing assaults targeting them and their homes.