A wide spread footage showed soldiers breaking into the school and taking the child from his class, to a military post by force. Later, he was released. video

Ziad Jabber school, located in Jabber neighborhood adjacent to the Ibrahimi Mosque, in Hebron, in the south of the occupied West Bank, is under full control of Israel occupation authorities, according to Al Ray.
21 mar 2019
Israeli Airstrike Injures Seven Palestinians In Gaza 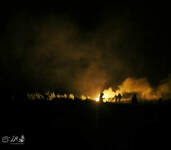 An Israeli military drone fired, on Thursday evening, a missile at several Palestinians, east of Rafah, in the southern part of the Gaza Strip.

Media sources has reported that the Palestinians were protesting on Palestinian lands near the  perimeter fence, east of Rafah.

They added that seven Palestinians were injured and were rushed  to several hospitals.

In related news, the Israeli army said it “fired a tank shell at a Hamas post,” in southern Gaza, and claimed that it was “retaliating to flammable balloons launched from Gaza.” 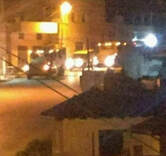 The Jenin office of the Palestinian Prisoners’ Society (PPS) has reported that the soldiers abducted Taha Najeh Sharqawi from Zababda town, in addition to Mo’taz Yousef Abu Jalboush and Abdullah Saleh Mousa from Marka.

An informed source has affirmed that the Palestinian prisoners in section 1 of the Ramon jail are being exposed to harsh punitive measures by the prison administration, adding that 40 prisoners suffered injuries during recent events in the facility.

The source told the Palestinian Information Center (PIC) the tension in the jail will escalate any moment because of the jailers’ persistence in their aggressive practices against the prisoners.

The source added that the Israeli prison service is insistent on its measures against the prisoners at the behest of the political leadership.

It noted that the Ramon administration still refuses to allow a lawyer to visit prisoner Muaad Bilal, who was physically assaulted by soldiers from the Metzada prison unit recently, amid concerns over his health condition.
Prisoner Tabish still isolated under harsh conditions in Ayalon jail

The Palestinian Commission of Detainees’ and Ex-Detainees’ Affairs has said that the Israeli prison service is still detaining prisoner Ayman Tabish, from Dura town in al-Khalil, in an isolation cell in Ayalon jail under harsh and inhumane conditions.

According to the Commission on Thursday, Tabish is being held in a very small and dark cell lacking cleanliness and ventilation and full of moisture.

The prisoner is also deprived of receiving visits, maltreated by jailers and only allowed to take a daily walk outside the cell for one hour.

Prisoner Tabish has been serving renewable administrative prison terms since he was arrested in August 2016.
Palestinian Homes Demolished in South Hebron Hills

Israeli forces demolished two Palestinian homes on Wednesday, at noon, in the South Hebron Hills of the occupied West Bank city of Hebron.

Israeli authorities seek to displace Masafer Yatta residents, in order to seize their lands, as part of an Israeli settlement expansion plan in the West Bank.

Around 3,000 Israeli settlers live in illegal Jewish-only settlements in the Yatta region, according to the Applied Research Institute – Jerusalem (ARIJ).

Masafer Yatta residents were expelled at the time of the establishment of a firing zone in the 1970s and were eventually allowed back following a long court battle, but are under the constant threat of being expelled or seeing their homes demolished.
Young Boy Beaten, Detained and Extorted in Al Khalil
Then the army came and beat me up and held me from here (chin). He took my ID and my phone and detained me, here. Don’t know what to do. Every few days I get arrested. I have a suspended sentence for 10 months, against me, and, if he calls the court, now, I will probably have to pay 10.000 shekels.

Where will I get them this money, then?! I work the whole day for 50 shekels. Not long ago, I was arrested for two months, because I was beaten up by a settler, and there's a video of that incident where they were attacking me.”

Israeli forces, today, abducted at least 13 Palestinians from various parts of the West Bank, according to the Palestine Prisoner’s Society (PPS).

Meanwhile, PPS confirmed that three Palestinians were rounded up during predawn raids across the southern West Bank district of Bethlehem.

Palestinian security sources said that among the three detainees was a young man from Tuqu’ town, southeast of Bethlehem city.

In Hebron, two Palestinians were rounded up from the southern West Bank district.

Elaborating on the Hebron-district raids, security sources said that Israeli forces detained Fateh’s secretary in the southern the West Bank, Awni al-Rajabi, who was taken from his house in Hebron city, and another man, after stopping him at a military checkpoint in the vicinity of the Ibrahimi Mosque.

In the northern West Bank, PPS said that two Palestinians were detained from the Nablus district.

The detainee was identified as the Director of Jerusalem’s Prisoners’ Affairs Commission office Thaer Anis.

Israeli forces frequently raid Palestinian houses on an almost daily basis, across the West Bank, on the pretext of searching for “wanted” Palestinians, triggering clashes with residents.

Israeli soldiers abducted, Wednesday, at least seven Palestinians, among them two women, in the occupied West Bank, including Jerusalem.

Media sources in occupied Jerusalem said the soldiers abducted Mohammad Salhi, near Bab ar-Rahma mosque, in the eastern part of the Al-Aqsa Mosque, and moved him to an interrogation facility.

The soldiers also abducted an elderly Palestinian woman, identified as Nafeesa Khweiss, after stopping her at one of the gates of the Al-Aqsa Mosque.

In Hebron, in southern West Bank, the soldiers abducted a young woman, identified as Israa’ Hammad Abu Sneina, 22, after stopping her at Abu ar-Reesh military roadblock, west of the Ibrahimi Mosque, on the main entrance of the Old City.

In Tubas, in northern West Bank, the soldiers invaded and searched homes in Tammoun town, south of the city, and abducted a young man, identified as Abdul-Rahman Jihad Bani Odah.

Furthermore, the soldiers invaded Aida refugee camp, north of Bethlehem, and abducted Hamza Abdul-Aziz Abu Srour, after breaking into his home and ransacking it.

On Tuesday. the soldiers injured several Palestinians at the entrance of the al-‘Arroub College, north of Hebron, in the southern part of the occupied West Bank.

Also on Tuesday, the soldiers abducted more than ten Palestinian workers in Barta’a town, isolated and surrounded by the illegal Annexation Wall, southwest of Jenin, in northern West Bank.

The abducted Palestinians are construction workers and were taken from a building when the soldiers invaded and ransacked it.
MADA Demands Release of Journalists

The Palestinian Center for Development and Media Freedoms (MADA) condemned, in a statement, the large-scale arrests and attacks that have been carried out by security forces in the Gaza Strip, over the last three days, against journalists and workers in human rights organizations — citizens who took part in peaceful marches to express their opinion on the situation in the region, a right guaranteed by international law and Palestinian Basic Law.

According to the monitoring and documentation unit at MADA center, so far, these attacks have affected at least 24 journalists.

These attacks include the abduction of 19 journalists and media workers, over the past three days, most of who were physically assaulted during their arrest — this in addition to the assault of the editing manager of the Bawabit Al-Hadaf news agency, Sami Yousef Issa, and Sawt Alsha’b radio station reporter Mahmoud Al-Louh, as well as the attack on journalists Hassib al-Wazir, Mohammad al-Jaysh, Joma’aa Dalool.

Other violations were also reported, such as the prevention of coverage, prosecutions and seizure of equipment, especially photographic equipment and mobile phones for journalists.

While a number of these journalists were released, following family and personal interventions, at least five of them are still in detention: the director-general of the Palestinian Broadcasting Corporation Raafat al-Qudra, the journalists Osama al-Kahlout, Amer Baalusha, and the media students Amjad Hailes and Osama Abu Sukran.

This repression was characterized by its severity and comprehensiveness, as it was not limited to demonstrators who took part in peaceful marches, but extended to journalists and human rights workers, aiming to block any media coverage or publication of what was happening in the Gaza Strip.

The attack on the journalist, Ashraf Sharif al-Kahlout, who is still in detention, summarizes the repression of media freedoms in Gaza since Thursday, whereas his family said, on Sunday, that “his release is delayed because he is unable to walk on his feet because of the physical attack on him.”

Al-Kahlout’s wife told MADA that masked gunmen from Hamas stormed their house on Friday (15/3/19) while Osama was broadcasting a live video, on his Facebook page, about peaceful popular protests against the high cost of living and poor economic conditions in the Gaza Strip, whereupon they beat him severely with sticks, pushed his mother to the ground, and then destroyed the contents of his office (computer and other equipment).

They also beat the director of the Independent Commission for Human Rights, Jamil Sarhan, and the lawyer of the Commission, Bakir Turkmani, both of whom were in Osama’s house, in the meantime. They then took the journalist Al-Kahlout to the Deir al-Balah police station, then to the hospital. After he was hospitalized for about two hours, they returned him to Deir al-Balah police center, where he is still detained.

Citing another example, PNN further reports that the editor of the news agency “Al-Hadaf”, Sami Yusuf Ibrahim Issa, upon his arrival on Thursday, to the Transe area in Jabalia, was subjected to harassment by about five members in civilian clothes who tried to prevent him from filming. When police began dispersing protesters with sticks and firing into the air, he moved to a nearby alley to avoid any harm.

But, after a while, about 10 masked men approached him without introducing themselves or to which faction or party they belonged, and beat him with their fists and feet, over his body.

They asked him to remove the pictures and give them his phone. When he refused, they continued to assault him and took the phone by force.

MADA holds the responsibility for the attacks over the ruling authorities in the Gaza Strip, demanding the release of all journalists and citizens abducted during these events, and to respect their right to freedom of expression.

MADA also stresses the need to establish an independent commission of inquiry into these attacks, publish the results of their findings, and see to the accountability of all those involved in the attacks.
Page:  9 - 8 - 7 - 6 - 5 - 4 - 3 - 2 - 1
Powered by