Chairman of the Detainees Affairs Commission, Issa Qaraqe, stated today that 80% of the demands of Palestinian detainees in Israeli jails, who ended their 41-day hunger strike on Saturday, have been met by the Israeli authorities.

He said, according to WAFA, that these achievements came thanks to the agreement concluded between the leaders of the strike and the Israel Prison Service on May 26-27. “A substantial transformation has been achieved by this strike. This constitutes an important achievement to be built on in the future,” Qaraqe remarked.

Following are the main demands that have been met by the Israeli authorities in the aftermath of the strike, as published by the Detainees Affairs Commission:

The Israeli occupation army claimed responsibility for the abduction of three Palestinians, two among whom on allegations of involvement in anti-occupation activities. The third was kidnapped on account of his affiliation with Hamas movement.

Coordination for the national anti-settlement committee in Beit Ummar, Mohamed Ayad, said the IOF stormed the town at the crack of dawn and kidnapped two Palestinian young men.

Violent clashes flared up shortly afterwards in the area, where the occupation soldiers attacked the Palestinian anti-occupation youth with randomly-unleashed spates of teargas canisters.

Several Palestinian civilians, including worshipers from Beit Ummar’s Grand Mosque, choked on teargas in the assault.

The IOF further wreaked havoc on civilian homes and came down heavily on the residents.

Meanwhile, ex-prisoner Ahmed Nouh Hreish was kidnapped by the occupation soldiers from his family home in Ramallah’s town of Beitounia.

Overnight, clashes burst out shortly after the IOF rolled into Jenin refugee camp, in the northern West Bank, and kidnapped the Palestinian young man Salam Sa’abna as he passed through a makeshift checkpoint pitched near the main entrance to Arraba town, south of Jenin.
27 may 2017
Hunger Strike Officially Suspended After Reaching An Agreement 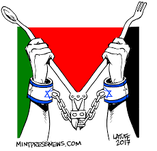 The hunger striking Palestinian detainees in various Israeli prisons have suspended their hunger strike, on Saturday at dawn, after a 20-hour session of talks, led by imprisoned legislator Marwan Barghouthi, and other senior political prisoners, with the Israeli Prison Authority.

They added that the agreement came after extensive talks between detained leaders and the prison authority, lasting for twenty hours.

The talks and the subsequent agreement came although Israel kept refusing any negotiations with detainees, especially with Marwan Barghouthi.

The hunger strike, held by 1800 detainees, started on April 17th, which also marks the Palestinian Prisoners’ Day’, and for 41 days, Israel believed that the strike will fail, and escalated its assaults and violations against the detainees, who remained steadfast, despite the life-threatening conditions many of them faced.

The agreement came just as the Muslims in Palestine, and around the world, began the holy month of Ramadan.
At Least Forty Detainees Moved To Makeshift Clinics 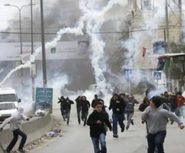 The Media Committee of the “Freedom and Dignity” hunger strike, has reported that the Israeli Prison Authority has transferred at least forty detainees from Ohali Kidar prison to several make-shift clinics.

A lawyer working for the Palestinian Prisoners Society managed to visit detainee Mohammad al-Ghoul, ongoing with the hunger strike for the 38th consecutive day, who informed him that many detainees are now facing life-threatening conditions.

Al-Ghoul said the prisons’ cells and rooms are infested with bugs, while the bedsheets given to the detainees are torn and very dirty.

He also stated that many detainees who were transferred to Ohali Kidar prison, on May 16th, remain unable to change even their underwears, and that the only clothing they have, are the dirty prison jumpsuits.

It is worth mentioning that dozens of detainees were recently transferred to hospitals, but Israel started moving them to makeshift field clinics, installed in front of prisons and detention centers.

On his part, the head of the Palestinian Detainees Committee, Issa Qaraqe, asked Arab members of Israeli Knesset to questions Israel’s Health Minister, about the readiness and capabilities of the make-shift clinics, especially since Israel intends to move all ailing the hunger striking detainees to these “clinics” instead of hospitalizing them.

“The so-called clinics lack basic supplies, medications and even any proper setting that would accommodate the seriously escalating health conditions of the hunger striking detainees,” Qaraqe stated, “The detainees require hospitalization, professional medical treatment, and checkups, especially since many suffer from heart conditions, liver and kidneys’ diseases and complications that require specialized medical treatment.”

Qaraqe’ added that the make-shift clinics, and Israel’s ongoing abuse and disregard of their legitimate rights, are subjecting the hunger striking detainees to imminent death.

“Israel’s Health Minister is conspiring with the Israeli Internal Security Minister by agreeing and helping with the establishment of these so-called clinics in front of many prisons,” the official said, “Such disregard of the basic rights of the detainees also violates all related international laws, and contradicts medical ethics.”

The official also called on the International Community to intervene without any delays, especially since many detainees could die at any given moment.
26 may 2017
Soldiers Abduct Two Palestinians In Ramallah And Jenin

Israeli soldiers invaded, on Friday at dawn, Silwad town, northeast of Ramallah in central West Bank, and Ya’bad town, southwest of the northern West Bank city of Jenin, and abducted a man and a teenage boy.

The Palestinian Prisoners Society (PPS) in Ramallah said the soldiers searched homes in Silwad, and abducted Bassam Hammad, the father of Anas Hammad, who was killed by Israeli army fire on Friday, December 4, 2015.

In related news, the soldiers invaded Beit Jala city, in the West Bank governorate of Bethlehem, and weld shut a Supermarket for selling fireworks.

The soldiers also posted a note on the shop threatening to close stores that sell fireworks, reportedly because some protesters use them against the invading Israeli forces during clashes.
Israeli Soldiers Abduct Five Palestinians Near Jerusalem

Israeli soldiers abducted, on Thursday evening, five Palestinians from a local mosque in Hizma town, east of occupied West Bank, after surrounding the mosque and invading it.

The invasion and abductions led to clashes between local youngster and the soldiers who’d fired many gas bombs, causing several residents to suffer the severe effects of teargas inhalation.

Although the soldiers withdrew of the town, they are still surrounding it, installed roadblocks and are preventing the Palestinians from entering or leaving it.
25 may 2017
Hunger Strike Enters 39th Day, Many Detainees Face Life-Threatening Complications

The head of the Palestinian Detainees Committee, Issa Qaraqe, has reported that as the Palestinian detainees in Israeli prisons enter their 39th consecutive day of the hunger strike, many of them have reached life-threatening health conditions and complications.

Qaraqe’ stated that Israel is still rejecting the legitimate basic demands of the detainees, and is refraining from holding serious talks with them.

In an interview with the Palestine Radio, Qaraqe’ said that contacts have been made with many legal and international organizations and human rights groups, in an attempt to push Israel to abide by International Law, and provide the detainees with their internationally guaranteed rights.

He added that Israel realized its so-called “field clinics” in front of several prisons, are insufficient and cannot house the considerable number of detainees, an issue that pushed the Prison Administration to move many of them to hospitals.

The Palestinian official also stated that Israel’s ongoing disregard of the legitimate demands of the detainees could lead to the death of many detainees, especially since dozens are facing very critical health conditions.

The detainees are demanding basic rights, including being able to have direct body contact with their visiting families, the right to adequate medical care, and ending the arbitrary Administrative Detention policies, holding them hundreds captive, without charges or trial.
Army Abducts Six Palestinians In Tulkarem 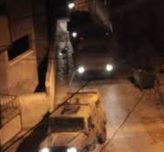 The Tulkarem office of the Palestinian Prisoners Society (PPS) said the soldiers searched many homes and interrogated several Palestinians before abducting six.

Israeli soldiers invaded, on Thursday at dawn, many Palestinian communities in the West Bank governorates of Qalqilia, Jenin, and Bethlehem, searched many homes and abducted seven Palestinians, including two siblings.

Many army vehicles invaded Azzoun town, east of Qalqilia in the northern part of the West Bank, before the soldiers stormed and ransacked homes, and abducted two Palestinians, identified as Nimir ‘Adwan and Ali Azzam Salim.

In related news, the soldiers invaded al-Baloa’ area, in the town of al-Khader, south of Bethlehem, searched homes and abducted Arwa Ibrahim al-Fawaghra, 30, and her brother Rafat, 32.

In addition, the soldiers invaded a print shop in Ramallah, in central West Bank, and shut it down for what the army claimed, “printing incitement materials,” referring largely to posters in support of the hunger striking detainees.

In Ni’lin village, west of Ramallah, the soldiers invaded and closed a blacksmith’s workshop, reportedly being used to manufacture homemade weapons.

In Hebron, in the southern part of the West Bank, the soldiers invaded Yatta town, south of the city, and confiscated seven private Palestinian cars, for “transporting workers, who do not have permits, into Jerusalem.

Furthermore, the soldiers invaded Jaba’ town, south of Jenin, also in the northern part of the West Bank, and abducted Mohammad Riyad Ghannam, after breaking into his home and searching it.