The media committee for the hunger strike revealed that the 47 sick detainees were moved from Nitsan isolation cells in Ramleh to a field hospital in Hadarim jail.

Palestinian hunger striking prisoners in Israeli jails have been fasting for 25 consecutive days in protest at detention conditions and for the demand of their rights.
15 Palestinian citizens kidnapped by IOF last night in W. Bank

The Israeli occupation forces (IOF) on Wednesday night kidnapped 15 Palestinian citizens and raided homes and stores in different areas of the West Bank.

According to a statement released by the Israeli army, one Palestinian was arrested in Tulkarem refugee camp, three in Kafr Qaddum town west of Nablus, two in Kifl Haris west of Salfit, and two others in Qalandiya and Abwein village, north of Ramallah.

Seven others were taken prisoners in Beit Surik village, northwest of Occupied Jerusalem, in Bethlehem city, the towns of Beit Fajjar, al-Khader, and Husan, as well as at Allenby border crossing with Jordan.

The Israeli army claimed that most of the detainees were on its wanted list and were taken to Shin Bet interrogation centers.

Moreover, the IOF claimed its forces closed a commercial store in Rantis town in Ramallah at the pretext that it was used as a meeting site for the planning and execution of attacks against Israeli targets.

The IOF also said in its statement that it forces raided and closed a metalworking shop used to manufacture weapons in al-Khalil city.
IOF kidnaps university lecturer after return from Jordan

The Israeli occupation forces on Thursday night kidnapped a Palestinian young man, from Nablus city, upon his return from Jordan, where he pursues his higher studies.

According to a family source, 30-year-old Muaad al-Sarkaji was arrested by the Shin Bet at Allenby border crossing with Jordan after he returned from Amman.

Sarkaji works as a lecturer at al-Ummah College in Ramallah city and travels every week to Amman to attend a postgraduate study program.

The detainee is married with one kid, and was already jailed for six months in 2010.
Plain-clothes soldiers kidnap young man in Jericho

Disguised Israeli soldiers on Wednesday night kidnapped a Palestinian young man during his presence in Jericho (Ariha) city, with no known reason.

Local sources told the Palestinian Information Center (PIC) that plain-clothes soldiers stormed the city, rounded up a young man called Qusai Sawafta, from Tubas city in the northern West Bank, and withdrew from the area.

The sources did not provide further information about the detainee and why he was detained.
Hunger Striking Detainees Reach Critical Levels, Many Vomiting Blood

The Palestinian Detainees’ Committee has reported, Thursday, that as the detainees continue their hunger strike for the 25th consecutive day, all of them are currently very weak, cannot stand or move due to severe weight loss, and many of them are vomiting blood.

The committee stated that the striking detainees, and despite their life-threatening health conditions, are facing escalating Israeli violations, while the authorities are not even trying to negotiate with them.

It added that all hunger striking detainees have lost 15-25 kilograms, and are all week, unable to move or even stand, in addition to being dizzy, suffering from severe pain and many are vomiting blood.

The Israeli Prison Authority is also frequently transferring striking detainees to various prisons, despite their deteriorating health conditions, while the soldiers have assaulted many of them.

The army is also frequently invading sections of the prisons, where the hunger-striking detainees are held, and are forcing them to stand “to be counted,” while imposing severe sanctions, including high fines, on any detainee who “refuses to stand to be counted, or resists it.”

The committee further stated that the soldiers have also confiscated the salt from the detainees’ rooms, while the water, they are forced to drink is both insufficient and unfit for human consumption.

In addition, lawyers who are requesting to visit with the detainees are facing various obstacles and are themselves treated in an illegal and arbitrary manner.

The committee added that Israel is refusing to negotiate with detained leaders, such as legislator Marwan Barghouthi, and is instead trying to divide the detainees’ unified stance and demands.

It demanded the International Red Cross to act fast, and ensure all hunger striking detainees are moved to hospitals, so that they remain under constant medical observation.
Israeli Soldiers Abduct A Palestinian Man In Hebron, Confiscate His Car

Israeli soldiers abducted, on Thursday at dawn, one Palestinians from the al-Roosh al-Foqa village, south of the southern West Bank city of Hebron, and confiscated his car.

The soldiers invaded the village, one of many communities surrounding Doura town, south of Hebron, before storming and searching many homes, and abducted Mohammad Othman al-Harbiyyat.

The soldiers also confiscated Mohammad’s car, and took them to an unknown destination, media sources in Hebron said.

Also in Hebron, the soldiers broke into a blacksmith’s workshop, confiscated its machines and tools, allegedly for being used to manufacture weapons.
Army Abducts Two Palestinians In Tulkarem

It added that the soldiers also invaded the Saff Street area, in the center of Bethlehem city, and abducted Abdul-Rahman Jadallah Shouka.

The PPS also said that the soldiers abducted Ashraf Mousa Thiab, 30, after breaking into his home, and violently searching it, in Wad Rahhal village, south of Bethlehem.
IOF closes Salem barrier west of Jenin after arresting young man

The Israeli occupation forces (IOF) on Wednesday closed the military Salem barrier west of Jenin city at the pretext of arresting a young man in possession of an explosive device.

Eyewitnesses told Quds Press that Israeli soldiers arrested a Palestinian young man at the road barrier, closed it and prevented relatives and lawyers of prisoners from going to the military Salem court.

They said that an Israeli officer told citizens at the barrier to leave the area, claiming there was an explosive device to be dealt with later by special technicians.

The Israeli army often closes barriers and checkpoints connecting different areas of the West Bank with each other under flimsy pretexts in order to obstruct the movement of Palestinian citizens.
10 may 2017
Younis: Hunger strike will continue until victory or martyrdom

In a leaked letter, Younis pointed to the Israeli lies and attempts to break the will of the strikers referring to the video published by the Israel Prison Service (IPS) which claims that leader Marwan al-Barghouthi broke his strike.

He stressed the importance of the role the Palestinian people should play in this battle through intensifying their solidarity activities at all levels in view of the escalating measures practiced by the IPS against the hunger striking prisoners.

Meanwhile, the National Committee to Support the Strike announced the cancellation of the partial strike which was scheduled on Thursday and declared it instead a day of anger and escalation and asked the Palestinian people to participate in its activities in all Palestinian provinces.

More than 1,500 Palestinian prisoners in Israeli jails have been on hunger strike since 17th April 2017, which marks the Palestinian Prisoner Day, in demand for their basic rights which they are denied by the IPS and which they were able to clinch in previous strikes.
Pizza Hut apologizes for ad mocking Palestinian hunger strikers

Pizza Hut International has apologized for an advertisement posted on its Israeli franchise’s Facebook page making fun of Palestinian prisoners, who have been on hunger strike since April 17.

“It was completely inappropriate and does not reflect the values of our brand. The local franchisee in the country removed it immediately and the relationship with the agency that posted it was terminated, and we truly regret any hurt this may have caused,” it added.

The Pizza Hut franchise in Israel recently posted on its Facebook page a screenshot taken from a footage released by the Israeli prison authority, claiming that the leader of the strike Marwan Barghouthi was eating secretly in his cell, and provided it with a caption reading in Hebrew, “Barghouthi, if you are no longer on hunger strike, why not eat pizza instead?”

Shortly after the advertisement was uploaded, Palestinian and Arab social media users started criticizing the pizza chain. Many even called for a boycott of Pizza Hut.
Army Abducts Three Palestinians In Bethlehem

Israeli soldiers abducted, on Wednesday at dawn, three young Palestinian men, from Bethlehem governorate, in the occupied West Bank, and summoned one woman for interrogation.

Also in Teqoua’, the soldiers summoned a Palestinian woman, identified as Hiyam Hasan al-‘Amour, 50, for interrogation at the Etzion military base and security center, south of Bethlehem, after storming her home and ransacking it.

In addition, the soldiers invaded the al-Khader town, south of Bethlehem, and abducted Mahmoud Ahmad Abu Swai, 21, after breaking into and searching his home, in Um Rokba area.
Hunger Strike Continues For The 24th Consecutive Day

More than 1700 detainees, held by Israel, continued their open-ended hunger strike for the 24th consecutive day, in several Israeli prisons, while Israeli continues to refuse their legitimate demands.

The Palestinian Prisoners’ Society and the Detainees’ Committee have reported that some of the striking detainees started refraining from drinking water for several hours at a time, due to the increasing difficulties they face just by trying to walk to the toilets, including when trying to refill their water bottles.

The Israeli Prison Authority has also started transferring many striking detainees from solitary confinement in Ramla prison to a field clinic that lacks basic supplies and medical professionals.

It also prevented, again, one of the lawyers of the Palestinian Detainees’ Committee from visiting detained leader Marwan Barghouthi, who is in solitary confinement at the al-Jalama prison.

The detainees are demanding basic rights, guaranteed by International Law and the Fourth Geneva Convention, while Israel continues to reject their demands and is imposing various restrictions on them, including repeated transfers, denying them visits with their families or lawyers, and forcing many of them in solitary confinement.

Among the main demands of the detainees are ending solitary confinement and Administrative Detention policies (holding them captive without charges or trial), providing them with professional and adequate medical care, and direct body contact with their visiting family members, in addition to regular, uninterrupted visits.
Israeli Soldiers Abduct 12 Palestinians In The West Bank 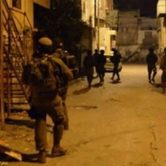 Israeli soldiers abducted, on Wednesday at dawn, twelve Palestinians from various parts of the occupied West Bank, including three students of Birzeit University.

The Palestinian Prisoners Society (PPS) has reported that the soldiers abducted three students of Birzeit University, in Ramallah, identified as Ahmad al-’Ayesh, who previously served as the head of the Students’ Senate, in addition to Amro Rimawi and Ahmad Faraj.

The soldiers also invaded and violently searched many homes in ‘Aseera she-Shemaliyya town, near Ramallah, and briefing detained fifteen Palestinians, including former political prisoner Bilal Kayed, who held an extended hunger strike during his previous imprisonment, under arbitrary administrative detention orders, without charges of trial.

The PPS stated that the soldiers have abducted twelve Palestinians, at dawn, in various parts of the occupied West Bank, during extensive invasions and violent searches of homes.
Page:  6 - 5 - 4 - 3 - 2 - 1
Powered by