The media committee of the hunger strike quoted lawyer Ajwa, who visited the hunger striker Othman Ziyada in Ashkelon jail on Thursday, as saying that the striking detainees are complaining of fatigue and tiredness and have lost over 20 kilograms of weight.

Israeli Prison Service (IPS) has been continuing daily search operations and confiscation of prisoners’ personal belongings. Four striking detainees were transferred to field hospitals over the past three days after the deterioration of their health conditions, the lawyer added.

Israeli Occupation Forces (IOF) arrested at dawn Thursday 23 Palestinians in the West Bank and Occupied Jerusalem including a father of 2 martyrs from al-Khalil.

A report issued by Israeli army said that the arrests included a Palestinian man from Kafr Qaddum town east of Qalqilya, two others from Zawata town west of Nablus, seven from Silwad town north of Ramallah, and a man from Aboud town near Ramallah.

The arrests also included six men from Hazma town east of Occupied Jerusalem, five others from each of Beit Awwa and al-Samou towns and al-Aroub refugee camp near al-Khalil, the report added. 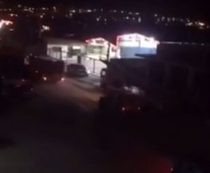 The soldiers broke into and violently searched several homes, interrogated a number of Palestinians while inspecting their ID cards, and abducted one child.

Locals identified the abducted child as Qais Abdul-Rahman Ali, 15, and added that the soldiers cuffed and blindfolded him, before moving him to an unknown destination.
Israeli Soldiers Abduct A Palestinian Near Bethlehem 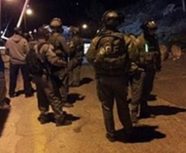 Israeli soldiers invaded, on Wednesday evening, the al-Khader town, south of Bethlehem, in the occupied West Bank, and abducted a Palestinian teen.

Local sources said the soldiers abducted Qussai Omar Sbeih, 18, and took him to an unknown destination.

They added that clashes took place in the town, after the army invaded it, especially in Um Rokba area, south of al-Khader.

The soldiers fired rubber-coated steel bullets and gas bombs; no injuries were reported.
17 may 2017
Teenager beaten and dragged off the street by soldiers in Hebron

Report By The International Solidarity Movement (ISM) – A Palestinian teenager was attacked in the street today by Israeli forces as he made his way through Hebron’s Old City. While talking with an NGO worker, the 18-year old was rushed by soldiers and beaten in broad daylight.

Bleeding, he was taken into the nearby Bab Al-Baladiyeh military base where is he is currently detained. It is not yet known whether he will be arrested, but he can be held without charge for 7 days.

In the immediate aftermath, friends of the boy threw stones at the base’s gates in protest. Soldiers emerged from the base firing volleys of tear gas and stun grenades. The boys ran, but after a manhunt, through the Old City two were found and detained in the base. Soldiers refused to explain their actions when questioned by ISM activists.

A manhunt continued through the tunnels of the Old City, with conflicting reports suggesting another boy may have been detained. The soldiers eventually passed through the Ibrahimi mosque checkpoint towards Shahuda street, where ISM activists were harassed and spat on by Israeli forces.

The two young boys were eventually released from detention, but the 18-year old is still being held, along with possibly another boy. The 18-year old has reportedly been harassed repeatedly by soldiers in recent days. Last week, he was cut on the wrists by Israeli interrogators after they accused him of lying to them. His relatives have apparently also received harassment from soldiers this past week.
Israeli Soldiers Attack Nonviolent Protesters, Journalists, Abduct Three, In Red Cross Yard, In Jerusalem

Israeli soldiers and security officers attacked, Wednesday, nonviolent Palestinian protesters, and journalists, in the courtyard if the International Red Cross center in occupied East Jerusalem, injured one Palestinian, and abducted three others.

The head of the Palestinian Prisoners’ Society (PPS) in Jerusalem, Nasser Qous, said the soldiers invaded the yard of the Red Cross and abducted Ahmad Safadi, Mohammad Daqqaq, and Kayed Rajabi.

The soldiers also assaulted a young man, identified as Areen Za’anin, causing various cuts and bruises, before Palestinian medics moved him to a hospital for treatment.

Qous added that the soldiers, and several security officers, attack the nonviolent protesters, including elders, in the courtyard of the Red Cross.

Qous also stated that Israel wants to silence all voices expressed in solidarity with the hunger striking Palestinian detainees in Israeli prison.

On his part, Amjad Abu ‘Assab, who heads the Jerusalem committee for prisoners’ families, said the soldiers videotaped the protesters and surrounded the Red Cross before assaulting the Palestinians, just as they were leaving it.

Abu ‘Assab added that the Israeli escalation and violations will never be able to stop the solidarity activities and protests in support of the detainees, who are asking for basic rights, guaranteed by International Law, the Fourth Geneva Convention, and all related treaties.
Army Destroys Inner Walls Of A Home Near Hebron, Abducts One Palestinian

On Wednesday afternoon, Israeli soldiers invaded a Palestinian home in Kreisa village, west of Doura, south of the southern West Bank city of Hebron, and demolished the inner walls of a home of a former political prisoner, and abducted one Palestinian in Bani Neim town, east of Hebron.

The WAFA Palestinian News Agency said the soldiers surrounded, for several hours, the home of former political prisoner, Rezeq Rajoub, who spent fifteen years in Israeli prisons, and detained the entire family after confiscating their homes.

WAFA added that the soldiers brought heavy equipment, and started digging around the home before invading it, and demolished its inner walls.

The soldiers also prevented Red Crescent medics from reaching the nearby home of Rajoub’s son, as they were trying to transfer the son’s pregnant wife to a hospital.

In Bani Neim town, east of Hebron, the soldiers abducted Soheib Abdul-Hamid Abu Jarour, after searching and ransacking his home.
Army Injures And Abducts One Palestinian in Silwad

Israeli soldiers invaded, Wednesday, the town of Silwad, north of Ramallah, in central west Bank, and clashed with many youngsters, before abducting one Palestinian and causing many others, including children, to suffer the severe effects of teargas inhalation.

Abdul-Rahman Saleh, the head of Silwad Local Council, said the soldiers shot Ibrahim Hamed, and abducted him, and added that the extent of his injury remains unknown.

Saleh also stated that dozens of residents, including children and woman, suffered the severe effects of teargas inhalation, especially after the soldiers deliberately fired gas bombs at many homes in the town.

It is worth mentioning that the soldiers surrounded Silwad since early morning hours, and invaded it several times, leading to clashes.

A 19-year-old Palestinian youth, Ibrahim Hamed, from Silwad town near Ramallah, was shot on Wednesday morning by a Jewish settler on Street 60, which is used by settlers in the area.

Eyewitnesses reported that the settlers' shooting attack took place when Palestinian youths tried to close the bypass road in the area as a solidarity move with Palestinian hunger strikers in Israeli jails who have entered day 31 of consecutive fasting.

The Palestinian Prisoners’ Society (PPS) has reported that Israeli soldiers abducted, earlier Wednesday, three Palestinians in Qalqilia and Jenin, in the northern part of the occupied West Bank.

The Qalqilia office of the Palestinian Prisoners’ Society (PPS) said the soldiers invaded many homes in the city, and abducted Mahmoud Shawahna, 26.

Furthermore, the soldiers invaded Qabatia town, south of Jenin, and abducted Yousef Sabri Assaf, after invading his family’s home and searching it. 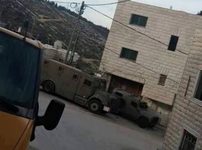 Israeli soldiers invaded, Wednesday, Bethlehem city, in addition to Teqoua’ and Husan nearby towns, searched several homes and abducted five Palestinians, including two siblings, one of them only 16 years of age.

The Bethlehem office of the Palestinian Prisoners’ Society (PPS) has reported that the soldiers searched and ransacked many homes in the city, interrogated several Palestinians and abducted Abbas Mohammad Shehada, 19.

It added that the soldiers abducted another Palestinian, identified as Rayyan Eyad Hamamra, 19, from his family’s home in Husan town, west of Bethlehem.

The Israeli police on Tuesday arrested 27 Palestinian workmen in neighborhoods in Haifa city, claiming they entered Israel with no work permits.

According to the Hebrew website Walla, the arrests took place near construction sites in the city.

All the detainees were taken to a police station in Haifa. There is no information if they will be questioned in the presence of lawyers.
Bethlehem: Torch-lit march in solidarity with hunger strikers

Dozens of Palestinian citizens on Tuesday night participated in a torch-bearing march in Bethlehem, south of the occupied West Bank, in solidarity with the hunger-striking prisoners in Israeli jails.

The participants rallied in front of the solidarity tent in the Manger Square before they marched carrying torches to the main gate of the Nativity Church.

Addressing the rallying citizens, Palestinian Authority official Issa Qaraqea, head of the Commission of Detainees’ and Ex-Detainees’ Affairs, talked about the latest developments regarding the hunger strike of prisoners, affirming there were recent interventions by top Israeli officials to consider the hunger strikers’ demands.

Qaraqea said the hunger strikers are determined to continue their battle to pressure their jailers to respond to their just demands.

About 1,500 Palestinian prisoners started on April 17 an open-ended hunger strike to demand basic rights. Other prisoners joined them later.

Their primary demands include more frequent and lengthy family visits, better incarceration conditions such as improved medical care, access to telephones and an end to solitary confinement and administrative detention without charge or trial.
Page:  9 - 8 - 7 - 6 - 5 - 4 - 3 - 2 - 1
Powered by