The child remains motionless, and the man is heard once again saying, “just don’t shoot her, cuff her…,” then he started shooting at the child, “just don’t move, remain as are, stay still.” Then the officers are seen cuffing the child, and a voice is heard saying “she has a knife in her bag.”

Many Palestinians have been recently killed just because the soldiers suspected they “intended to carry out a stabbing attack,” without even attempting to attack anybody. Her name remained unknown until the time of this report.

People witnessing the unfolding events said they were so concerned that the child was about to be killed although she was motionless, because the soldier kept aiming his rifle at her, while standing in a shooting position, ready to pull the trigger at any second.

In related news, the soldiers abducted a young man, identified as Mohammad Awad, from Aqbat as-Saraya, in the Old City of occupied Jerusalem, and moved him to an unknown destination.

Israeli policemen rounded up the Palestinian minor, who was wearing school uniform, and took her to an investigation center in Occupied Jerusalem.

Israeli police arrested on Saturday afternoon a Jerusalemite young man suspected of stabbing a Jewish settler in the Old City of Occupied Jerusalem.

Quds Press reported that Israeli police along with border guards were intensively deployed in the vicinity of the Old City. Israeli forces closed the Old City’s gates and barred Jerusalemite people from accessing the site.

Israeli policemen rounded up Mohammad Awad from the Old City of Occupied Jerusalem after the alleged anti-occupation attack.

In a statement on Saturday, Israeli police reported that a haredi Jew was stabbed and slightly injured by somebody, then he was taken to the hospital.

In a following statement, the police denied the first claim that the attack resulted from an anti-occupation stabbing incident and stated that the attack was carried out in a fight between a Jerusalemite man, a settler and another Jewish man for criminal reasons. Eyewitnesses said that the settler was hit by a bottle.
Israeli Soldiers Abduct One Palestinian In Bethlehem, Three In Tulkarem 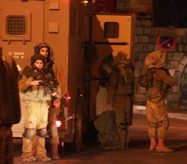 Israeli soldiers abducted, on Saturday at dawn, one Palestinian in ‘Aida refugee camp, north of Bethlehem, and three others in Shweika area in Tulkarem, in the occupied West Bank.

Several army vehicles invaded Aida refugee camp, north of Bethlehem, before the soldiers searched homes, and abducted a young man, identified as Yacoub Hammad, 22, and took him to Etzion military base, south of Bethlehem.

In addition, the soldiers invaded Shweika area, north of Tulkarem in the northern part of the occupied West Bank, violently searched homes and interrogated several Palestinians, before abducting three. 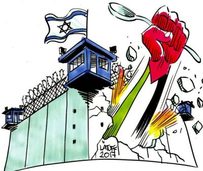 Around 1600 Palestinian political prisoners, held by Israel, continue the hunger strike for the 34th consecutive day, determined to achieve their demands, while Israel continues to refuse to hold serious talks, and instead, is trying to divide them, in addition to punishing many by forcing them into solitary confinement, and repeatedly transferring many to different prisons.

The Media Committee of the Palestinian Detainees Committee has reported that the “Freedom and Dignity” strike is going through one of the most serious and sensitive stages, and that the detainees are determined to continue until achieving their demands.

It said that the Israeli government has appointed the head of the Shabak, and the Prison Authority, to do whatever is possible to end the hunger strike before U.S. President Donald Trump visits the region, “even if this means adhering to most of the detainees’ demands.”

The Committee stated that Israel tried various methods to end this strike and to break the will of the detainees, but is reaching a dead end amidst the determination of the detainees.

In addition, the committee said that the imprisoned leadership of the strike is the only party that can accept or reject any suggested offers, and will continue to resist all Israel attempts to break the detainees’ unity.

“The striking detainees are very determined to achieve their legitimate demands,” the committee said, “They also reply on public support and solidarity, especially at this delicate stage of the strike.”

The detainees are ongoing with the strike, demanding basic rights, guaranteed by International law, and all human rights agreements. These rights include ending solitary confinement policies, allowing them regular visits with their families, and granting them adequate medical attention.
Israeli Soldiers Abduct Two Palestinians, Injure One, Near Tulkarem

Israeli soldiers abducted, on Friday evening, two young Palestinian men, including one who was shot by the army, and rammed a third Palestinian with their jeep, during clashes that took place at the Bazaria junction, east of Tulkarem, in the northern part of the West Bank.

The WAFA Palestinian News Agency said one of the abducted Palestinians was shot with a live round before the soldiers abducted him.

One Palestinian was also injured after the soldiers rammed him with their jeep, and was moved to Thabet Thabet Governmental hospital, in Tulkarem.

Another Palestinian was struck in the chest by a teargas bomb, fired by the soldiers, and was moved to a local clinic.

Furthermore, medics provided the needed treatment to three Palestinians who suffered the severe effects of teargas inhalation.
Israeli Soldiers Abduct A Child, Injure Another, Near Ramallah 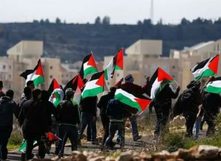 Israeli soldiers abducted, on Friday evening, one Palestinian child, and injured another, after the army invaded Ni’lin village, near Ramallah, while chasing protesters.

Media sources in Ramallah said the soldiers abducted Jamal al-Khawaja, 15, and shot another child with a rubber-coated steel bullet.

The attack took place after the soldiers assaulted Palestinians protesting near the main entrance of Ni’lin village, in solidarity with the ongoing hunger strike of the Palestinian detainees since April 17th.

The Palestinians closed road #445, which leads to many illegal Israeli colonies, built on privately-owned Palestinian lands.

The undercover officers infiltrated into the area, around Bilal Bin Rabah mosque, north of Bethlehem, and abducted the six young men before withdrawing back to the Rachel Tomb area, before several army vehicles advanced into the Palestinian neighborhoods.

The hunger striker prisoner Mansour Shreim, who has been participating in the open hunger strike for 33 consecutive days, affirmed that the striking captives are subjected to abuse and ill-treatment by Israeli Prison Service.

The lawyer of Detainees and Ex-detainees Committee, Mutaz Shqeirat, quoted captive Shreim as saying that he has lost 18 kilograms and is suffering from fatigue, exhaustion, constant dizziness and difficulty in movement. The isolation cells do not meet humanitarian standards as every four prisoners are held in one cell, the lawyer pointed out.

Shreim, who met the lawyer on Thursday evening, revealed that the prison doctor and nurse are, most of the time, not available in the clinic in full disregard to the critical health conditions of the striking detainees.
Five West Bankers kidnapped in IOF dawn campaigns

The Israeli occupation forces (IOF) at dawn Friday kidnapped five Palestinian citizens, including a paramedic, in al-Khalil and Nablus.

Local sources reported that Israeli soldiers stormed areas in al-Khalil city at dawn and kidnapped three Palestinians from their homes, adding that a car belonging to one of the detainees was confiscated during the IOF campaign.

The detainees were identified as Suhaib Abu Hussein, Yousef Amr, and Issa al-Ja’bari, the owner of the seized car.

In Nablus, the IOF kidnapped a paramedic called Yousef Dairiya from his home in Aqraba town and confiscated an ambulance he usually drives.

A family source told the Palestinian Information Center (PIC) that Dairiya was aboard the same confiscated ambulance at the entrance to Huwara town in Nablus on Thursday when a Jewish settler opened fire at Palestinian protesters killing Mu’taz Bani Shamsa and wounding a journalist.

The source added that Dairiya was witness to the crime of killing Bani Shamsa.

In a related context, another Palestinian citizen was taken prisoner during an IOF dawn campaign in Nablus city, north of the West Bank.

The detainee was identified as Jamal Shalo, the owner of al-Waleed Transport Company in the city.

The IOF also confiscated one of the company’s buses at the pretext that it was used to transport citizens from Nablus city to Huwara town, where Bani Shamsa was shot dead by a settler during a protest rally in solidarity with hunger-striking prisoners in Israeli jails.
On 33rd day of hunger strike, angry protests to sweep Palestine

Different areas of the occupied Palestinian territories are expected to see angry protests on Friday afternoon in solidarity with the hunger-striking prisoners, who entered day 33 of their open-ended strike in Israeli jails.

The Palestinian resistance factions in the Gaza Strip have already called on citizens in all areas of Palestine to participate today in massive popular angry protests they dubbed as the day of anger in all flashpoints in the West Bank, Jerusalem and Gaza.

In a news conference held in Gaza on Thursday, a spokesman for the resistance factions warned Israeli jailers that “if any hunger striker gets hurt in their prisons, the factions’ armed wing will not stand idly by.”

“If the peaceful activities have proved useless with such arrogant enemy, which only understands the language of force, then we are ready to speak with it in its own language,” the spokesman said.
Clashes in West Bank after settler kills young man in Huwara

Violent clashes broke out on Thursday in the vicinity of Nablus city and other West Bank areas between dozens of Palestinian young protesters and the Israeli occupation forces (IOF).

According to Quds Press, skirmishes between angry young men and Israeli soldiers took place in the towns of Huwara and Beita, south of Nablus, after a Jewish settler killed 23-year-old Mu’taz Bani Shamsa and wounded a photojournalist in Huwara town, south of Nablus.

Eyewitnesses reported that Israeli soldiers fired rubber bullets and volleys of stun and tear gas grenades at the young men, who protested the killing of Bani Shamsa.

In a related context, the IOF closed the checkpoints of Huwara and Za'atara, south of Nablus, which obstructed the movement of Palestinian citizens.

Clashes also broke out at the main entrance to Qalqilya city after Israeli soldiers attacked a march organized in solidarity with the hunger strikers in Israeli jails.

The Red Crescent said that some young men were rushed to a local hospital in Qalqilya after they suffered injuries during the events.

In Ramallah, similar clashes took place in Silwad town. One young man was injured with a rubber bullet and many others suffered from inhaling tear gas