The Israeli Occupation Forces (IOF) on Sunday evening arrested a Palestinian woman at Qalandia military checkpoint, to the north of occupied West Bank.

A 47-year-old woman was arrested at Qalandia checkpoint for allegedly holding a knife in her possession, 0404 Hebrew site claimed.

The unidentified woman was planning to carry out an anti-occupation attack, the source added.

Palestinian Prisoner Society (PPS) on Sunday revealed that Israeli Shin Bet has been isolating two Palestinian brothers, Ibrahim and Ismail al-Arrouj, from Bethlehem, at the pretext of the so called “the secret file”.

The lawyer of PPS, who visited captive Ibrahim al-Arrouj, 33, in Megiddo jail, said that Ibrahim has been held in solitary confinement since January 31, 2018, and his brother Ismail, who is detained in Raymond jail, for nine months.

They also have a third detained brother, Issa, who is held in Ofer Israeli prison under custody.
Hours after her release, Palestinian girl banned from Aqsa Mosque

The Israeli occupation authorities banned a Palestinian girl living in Occupied Jerusalem from holy al-Aqsa Mosque for one month.

An Israeli court ruled at nightfall Saturday that Aya Abu Nab be banned from entering al-Aqsa Mosque—the third holiest site in Islam—for a period of one month.

A few hours earlier, Aya was released from the Israeli Qisheleh detention center, West of Occupied Jerusalem, where she had been made to endure exhaustive questioning by the Israeli intelligence.

Aya was kidnapped by Israeli cops deployed near Bab Hitta (one of al-Aqsa’s main entrance gates). She was dragged, handcuffed, to an Israeli detention center.

Israeli guards of Shilo illegal settlement, which was forcibly established over Palestinian land south of Nablus, on Sunday chased a group of children in Qaryout town near the city.

Eyewitnesses told the PIC reporter that Israeli occupation forces (IOF) protected the extremist settlers while following the Palestinian young men at the pretext of approaching the settlement.

Later on, IOF soldiers raided the town and arrested a Palestinian youth, Mujahed Mousa, for his refusing to hand over the children or give their names to the IOF.
5 may 2018
Army Abducts A Teen Near Jenin, Summon Several Palestinians For Interrogation

Israeli soldiers invaded, on Saturday at dawn, the al-Yamoun town, west of the northern West Bank city of Jenin, and summoned two others from Jenin and Ramallah for interrogation.

The army also fired live rounds, rubber-coated bullets and gas bombs at many youngsters who protested the invasion into Silwad, in addition to Nablus, in northern West Bank.

Clashes erupted between Palestinian youths and the Israeli occupation forces (IOF) during raids launched in the West Bank at dawn Saturday.

Eyewitnesses told the PIC reporter that clashes broke out at daybreak between Palestinian youths and IOF soldiers after eight IOF patrols raided Ras al-Ain neighborhood in Nablus and broke into a residential building.

The sources pointed out that the arrest campaigns targeting high school students, who are supposed to have their final exams at the end of May, have been stepped up recently.

The Israeli occupation authorities (IOA) arrested the Palestinian academic Osaid Fatayer at al-Karama crossing upon his return to the West Bank from Jordan on Thursday.

Fatayer's family said that their son was supposed to return home on Thursday evening, but they were shocked by the news about his arrest.

They added that Osaid, a resident of Nablus, has recently obtained a PhD in Islamic Economics from Yarmouk University in Jordan.

A Palestinian poet was convicted of "inciting violence" and "supporting a terrorist organization" by an Israeli court on Thursday for anti-occupation content she posted on social media.

According to the Israeli indictment, Tatour also uploaded a video on her Facebook and YouTube accounts that shows footage of Palestinians throwing stones at the Israeli army troops, with her reading in the background of her "Resist, My People, Resist Them" poem.

Analysts argued the poem had been misinterpreted by Israeli translators, that the content was "artistic expression" rather than a call to violence, and that the Israeli charges ran counter to the freedom of expression.

"The verdict violates the right of speech and freedom of expression. It is an infringement on cultural rights of the Palestinian minority inside Israel. It would lead to self-censorship and self-criminalization of poetry," her lawyer told reporters.

Tatour said after the verdict that her trial "ripped off the masks" of Israeli democracy and justice.

In an interview before the verdict, Tatour told Middle East Eye she had already spent two and a half years flitting between custody and house arrest.

She said Israeli interrogators initially had little to question her about.

"First, they accused me of incitement based on a poster I posted in 2014, which contained the words "I'm the next martyr". The martyrs are the victims of the Israeli occupation, who are being shot by soldiers," Tatour said. "The accusation was weak, so they dug into my Facebook and found the poem."

"Here, they interpreted a line in the poem that says 'Resist, my people, resist them, Resist the settler’s robbery, And follow the caravan of martyrs' - as inciting people to be killed and be martyrs," she said.

PEN International strongly condemned the decision of the Nazareth Magistrate's Court to convict Tatour of ‘support for a terrorist organization’ and ‘incitement to violence’.

PEN International President Jennifer Clement, who met Dareen Tatour at her home in Nazareth last year, said: “Dareen Tatour has been convicted for doing what writers do every day – we use our words to peacefully challenge injustice. I was incredibly honored to meet Dareen at her home last year and PEN will continue to call for justice in this case.”

PEN said it believes that Dareen Tatour was targeted for her poetry and peaceful activism and vowed to continue campaigning for her immediate release and for the charges against her to be dropped.

Tatour was arrested on 11 October 2015, about a week after she published her poem.

Tatour was arrested for three months and was interrogated five times by Israeli officers. Each interrogation lasted five to six hours, she told the MEE.

In January 2016 Tatour was released, after being fitted with an ankle monitor, to a house arrest for six months at the home of her brother in Kiryat Ono neighborhood in Tel Aviv.

"They considered me a danger for Israelis, but when they dictated the location of my house arrest, they could not find a place more Israeli than Tel Aviv to do that. I find this ironic," she said.

She added that the house arrest was a harsh experience.

Far from her family in Reineh village, she was not allowed to use a mobile phone or the internet or even to publish texts in the media. After four months of house arrest, she was allowed to leave the house for two hours on weekends, if accompanied by a relative.

Israeli soldiers abducted, on Friday at dawn, at least five Palestinians from their homes in several parts of the occupied West Bank, the Palestinian Prisoners’ Society (PPS) has reported.

The Nablus office of the PPS said the soldiers searched homes in the city, and Askar refugee camp, and abducted Mohammad Hamdan Mirweh.

Israeli soldiers invaded, on Friday at dawn, Palestinian homes in Hebron, in the southern part of the occupied West Bank, and fractured the arm of a woman who tried to prevent them from abducting her son.

Media sources in Hebron said the soldiers invaded the home of Bassam Abu Aisha in Jabal Abu Rumman area, in Hebron city, violently searched the property causing excessive damage, and assaulted his wife who tried to prevent them from abducting her son, Sa’ed, 27.

The sources added that the woman suffered fractures in one of her arms, in addition to causing various cuts and bruises, before abducting her son.
Besides causing excessive damage to the family’s home, the soldiers also confiscated cash from the property.

In addition, the soldiers invaded the home of Ayed Doudin, a political leader of Hamas in the al-Alqa village, in Doura town near Hebron, just hours after releasing him from prison after he was held for 18 months under arbitrary Administrative Detention orders without charges of trial.

The soldiers also invaded Beit ‘Awwa town, southwest of Hebron, and searched many homes, including the home of a political prisoner, identified as Nabil al-Masalma.

In related news, the soldiers invaded the Tarbeeqa area in Beit Ummar town, north of Hebron, and violently searched the home of Hilmi Abu Ayyash, before summoning him for interrogation in Etzion military base.

Prior to withdrawing from Beit Ummar, the soldiers fired gas bombs and concussion grenades at local youngsters who hurled stones at the invading jeeps; many Palestinians suffered the effects of teargas inhalation.
Soldiers Abduct Palestinian Woman Minutes After Her Release From Prison

The young woman, Aya Salem Shawamra, 24, from occupied Jerusalem, was taken prison on May 25, 2017, and was sentenced to one year in prison.

Minutes after her release from HaSharon Israeli prison, Thursday, and even before her family arrived to pick her up, the soldiers rearrested Aya, and moved her to the al-Jalama prison; she will be sent to court Friday.

Amjad Abu Assab, the head of the Jerusalem Detainees’ Committee, said the soldiers claimed that Aya “carried a sharp object,” al-though she was just released from prison, standing in front of the facility and waiting for her family.

It is worth mentioning that Aya is also a former political prisoner who was previously imprisoned by Israel for eight months.
Israeli Soldiers Injure A Child, Abduct A Woman, In Jerusalem 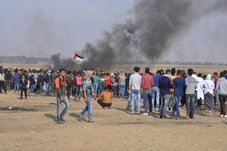 Israeli soldiers invaded, on Thursday afternoon, the town of al-‘Isawiya, in occupied East Jerusalem, mildly injured a child and abducted a Palestinian woman.

Mohammad Abu al-Hummus, a member of the Follow-Up Committee in al-‘Isawiya, said dozens of soldiers, and police officers, invaded the town just as the students were leaving their schools.

He added that the soldiers invaded homes and abducted a Palestinian woman, identified as Hayat Mheisin, the mother of Ismael, who was recently abducted by the army and is still under interrogation.

Furthermore, the soldiers fired rubber-coated steel bullets and concussion grenades at random during the invasion, wounding a child in the lower limbs, and causing many to suffer the effects of teargas inhalation.
Page:  3 - 2 - 1
Powered by