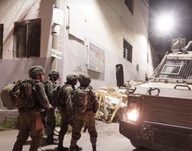 The Israeli occupation forces (IOF) at dawn Wednesday arrested 21 Palestinians in raids launched in Jerusalem and the West Bank.

The Israeli occupation army said in a statement that 14 of the detainees are wanted over involvement in anti-Israel activities.

Violent clashes erupted at dawn in Qalqilya after the IOF soldiers stormed the city and arrested four Palestinian citizens, including a mother and her two sons.

Other confrontations broke out in Azzun town, while Israeli undercover soldiers were deployed in large numbers at the town's entrances.

The PIC reporter said, quoting local sources, that the IOF arrested four ex-prisoners during a raid into Asira al-Qibliya town north of Nablus.

According to the Israeli army's statement, the IOF confiscated a sum of money after searching a number of houses in the town for allegedly being used to fund resistance operations.

About nine Palestinians were arrested in campaigns launched in Salfit and Jerusalem, while the PIC reporter in al-Khalil said that the IOF raided and searched houses of Palestinian ex-prisoners in the city.

Israeli soldiers abducted, on Wednesday at dawn, at least fourteen Palestinians from their homes, after invading and violently searching them, in several parts of the occupied West Bank. The soldiers also caused fire in olive orchards and wheat fields.

The soldiers also fired many gas bombs and concussion grenades while withdrawing from Azzoun, causing fires in wheat fields and olive orchards.
In occupied Jerusalem, the soldiers also searched and ransacked homes and abducted seven Palestinians, including a child.

The Palestinian Detainees’ Committee has reported, Tuesday, that a detainee suffered serious brain hemorrhaging, and is currently in a coma at an Israeli hospital.

The Committee stated that the soldiers also assaulted the detainee, Aziz ‘Oweisat, while moving him to the hospital, as the army is accusing him of stabbing a soldier in late April, after the two argued in Eshil prison.

The detainee also suffers with a difficult psychological condition, and is currently in a critical health condition due to brain hemorrhaging.

It is worth mentioning that ‘Oweisat is from Jabal al-Mokabber in occupied Jerusalem; he was taken prisoner in 2014 and was sentenced to 30 years in prison.
8 may 2018
Israeli Soldiers Abduct Twenty Palestinians In West Bank

Israeli soldiers abducted, on Tuesday at dawn, at least twenty Palestinians from their homes in several parts of the occupied West Bank, including former political prisoners and one child, in addition to confiscating one car and cash.

The soldiers also confiscated a jeep owned by a former political prisoner, identified as Ahmad Nabhan Saqer, in Askar Al-Qadim refugee camp, northeast of Nablus, just one day after his release from prison.

The soldiers also injured a young man, identified as Qussai Rabea’ Mer’ey, after shooting him with a concussion grenade, before he was rushed to Khalil Suleiman Governmental Hospital, and caused many others to suffer the effects of teargas inhalation.

In Qalqilia, also in northern West Bank, the soldiers invaded al-Mintar area and Azzoun town, east of the city, and opened fire at Palestinian protesters.

The army also abducted a child, identified as Majd Anaya Hussein, only thirteen years of age, from Azzoun, and took him to an unknown destination.

In Hebron, in the southern part of the West Bank, the soldiers invaded the home of former political prisoner, Fayez Misk, ransacked the property and fired a concussion grenade inside his home, wounding one family member, before illegally confiscating cash.

The soldiers also invaded the home of Arafat Najeeb, a local guard of the Al-Aqsa Mosque in Jerusalem, and summoned him for interrogation after violently searching his property.

In related news, the soldiers invaded ‘Aroura village, north of Ramallah, and drove provocatively in its streets, before withdrawing.
7 may 2018
Knesset approves bill to deduct PA payment to prisoners

Israeli Knesset on Monday approved by a 55-14 a bill to deduct money paid to Palestinian prisoners by the Palestinian Authority from its monthly tax revenue.

The bill still needs to pass its second and third readings.

If the bill passes its second and third readings, it will allow Israel to deduct the sums of money given to Palestinian prisoners each month from the overall sum of tax revenues.

According to Israeli media, the bill also proposes that the Israeli cabinet be authorized to freeze the transfer of tax money under certain conditions.

In a tweet, Israel's Army Minister Avigdor Lieberman called to put an end to "the madness of us giving money to the Palestinian Authority so they can use it to encourage acts of terror against us."
Israeli police detain 2 Jerusalemites in their car for over 3 hours

Israeli police on Monday detained two Jerusalemite youths from Silwan town to the south of Occupied Jerusalem inside their car for over three hours.

A local source said that the detained men were identified as Munther Jamjoum and Mahmoud Jaber.

The youths were detained and threatened with arrest by Israeli forces after a group of Jewish settlers provoked the inhabitants in Batn al-Hawa neighborhood in Silwan, the source pointed out.
Israeli court isolates Palestinian hunger striking prisoner

The administration of Ashkelon Israeli jail held an internal trial for the Palestinian hunger striking detainee, Ibaa al-Barghouthi, 40 years old from Kober town west of Ramallah, according to Karim Ajwa, the lawyer of Detainees and Ex-detainees Committee.

Ajwa said in a statement on Monday, that the court imposed sanctions against captive Barghouthi including one-week solitary confinement and banning from family visitation.

Lawyer Ajwa who visited Ashkelon jail said that the health condition of detainee Barghouthi has been deteriorating. He is suffering from high fever and severe headache and stomachache.

Prisoner Barghouthi has been going on hunger strike for 16 days in protest at being held under the illegal administrative detention without a charge or trial. He is also boycotting prison’s clinics and refusing to do medical tests.
Alarm raised over inhuman inter-prison transfer of Palestinian inmates

Head of the Palestine Prisoners Center for Studies Rafat Hamdouna has sounded alarm bells over the abject conditions Palestinian detainees have been enduring during inter-prison transfers by the Israeli prison authorities.

Hamdouna said the Palestinians have been subjected to harsh treatment during their transfer to other prisons or to court via the “bosta” vehicle.

Hamdouna’s calls came following appeals launched by the wife of prisoner Khader Adnan to speak up for the agony inflicted on Palestinian inmates during transfer joruneys via the “bosta”.

She said her husband, among other detainees, have been mistreated, oppressed, and tortured while being moved to and back from Israeli courts.

Hamdouna spoke out against the horrible smells stemming from the “bosta”, into which Israeli criminals and Palestinian political prisoners are crammed.

He added that Israel’s Nashon suppressive troops have been preventing Palestinian inmates from food, water, and toilets.

The “bosta” vehicle is very hot in the summer and very cold in the winter for it is made of thick tin and has metal chairs. It also has poor ventilation, is overcrowded, and contains an isolated cell that can barely accommodate a prisoner.

Hamdouna also said prisoner patients, particularly those diagnosed with diabetes, cannot take in their drugs on time due to the lack of needed water and are usually barred from going to the toilet, which severely affects their health status.

The “bosta” is the Israeli inter-prison transfer vehicle in which the Palestinian inmates are cuffed all the way to and back from court, clinic, or another jail while sitting on metal chairs.
IOF arrests 19 Palestinians in West Bank raids

The Israeli occupation forces (IOF) at dawn Monday launched large-scale raid and arrest campaigns in the West Bank and Jerusalem.

The PIC reporter said that the IOF arrested six Palestinians and handed another an interrogation summons during a raid into Qarawat Bani Hassan town west of Salfit.

Youth activist Mohammed Ishtiyeh said that the IOF raided a number of Palestinian houses in Salem village east of Nablus and detained a group of Palestinian youths in a square in the middle of the village and interrogated them for long hours.

The PIC reporter said, quoting local sources, that other raids were witnessed in Jenin refugee camp and Burqin village during which two Palestinian youths were arrested.

Meanwhile, a local source reported that the IOF raided al-Khader town south of Bethlehem and arrested a 15-year-old boy and two men after breaking into their houses and searching them.

In the same context, two Palestinians were arrested during a raid and search campaign in Hizma town in Occupied Jerusalem.

Israel's arbitrary arrest campaigns at daybreak have become part of the daily routine in the West Bank and Jerusalem.

According to the latest Palestinian statistics, there are about 6,500 Palestinian detainees languishing in Israeli jails, including 63 females, 6 of whom are minors, 350 children and 11 members of the Palestinian Legislative Council.
Page:  4 - 3 - 2 - 1
Powered by